Things To Do in Park Street, Kolkata's 1960s Hipster Hub 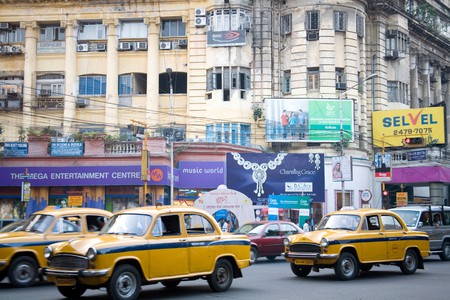 Park Street in Kolkata has an old-world charm, with bakeries and restaurants that have been around for decades. Here’s how to experience the Park Street of yesteryear, at age-old eateries and bars that have hardly changed.

Ask a longtime resident of Kolkata about their memories of the city, and they will tell you about Park Street. You might not think so today, with its five-star hotels and people spilling out of the local Starbucks, but in the ’50s, ’60s and ’70s, this effervescent pedestrian street was the place where you could find twenty-somethings jiving to peppy Motown numbers, or men in white dinner jackets feasting on prawn cocktail and lobster thermidor at one of the many restaurants. Here’s where to go and what to see on a nostalgic jaunt through Park Street.

When Swiss couple Frieda and Joseph Flury first opened the doors to their bakery in 1927, the Christmassy aroma of plum cakes and their excellent Sunday breakfasts drew in British and Bengali crowds alike. The bakery kept its sheen, even as the Europeans left in large numbers after India’s Independence, and stayed under the management of the Flurys until the 1960s.

Now owned by the Apeejay Surendra Group, Sunday morning breakfast here is a tradition that is still going strong. People pour into this iconic tearoom soon after it opens its doors at 7.30am, to seat themselves among an explosion of pink. From the unmissable pink sign bearing the name of the establishment, to the menus, decor and waiters all dressed in pink, in Kolkata the colour is almost synonymous with Flurys. 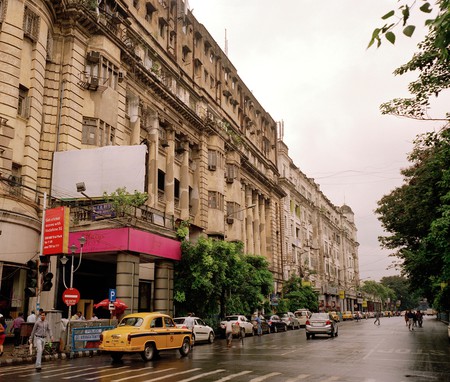 Vikas Kumar, executive chef at Flurys says his venue has been “the quintessential ‘Queen of Park Street’, for close to a century now. It’s impossible to imagine Park Street without Flurys. Although we have 38 outlets now, the Flurys at Park Street remains the most nostalgic for the last five generations of patrons. In essence, Flurys is the style icon of Kolkata, just the way Park Street is!”

Try the Jogger’s Breakfast (possibly named so because only a jogger can afford the calories), or a Flury’s favourite – the eggs benedict. Apart from breakfast staples, Flurys is also famous for the heritage items on their menu – those that have been around since its inception – like the Rumball, a golf ball sized hunk of chocolate truffle that has featured extensively in local blogs and newspapers. Joseph Flury may have died long ago, but his European rumball is here to stay.

Buy the latest paperback and drink some cha at Oxford bookstore

Tucked between nightclubs and bars on Park Street is Oxford Bookstore, its bright red sign as recognisable as any of the famous eating joints here. The bookstore has hardly changed since it first opened its doors in 1919, with a full range of books spread over two floors. The upper floor houses Cha Bar ( ‘cha’ is tea in Bengali), a small café that contributes most of this quiet bookstore’s noise pollution. Usually buzzing, especially on weekends, you’ll be able to spot customers chatting with friends and browsing through coffee table books here. 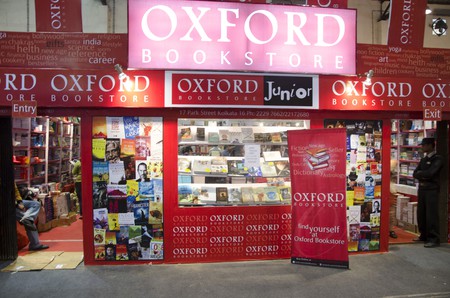 Oxford bookstore first opened its doors in 1919, and has a full range of books spread over two floors | © Dinodia Photos / Alamy Stock Photo

Eat some 1950s Spaghetti with Meatballs at Mocambo

In the ’50s and ’60s, dinner on Park Street looked like a scene from a black and white movie, where men in white dinner jackets held sway at European-influenced restaurants like Mocambo and Moulin Rouge. Shivji V. Kothari, who founded Mocambo in 1956, had employed an Italian chef at the time and the menu reflected the chef’s culture. Though white dinner jackets are no longer necessary (they were in the ’50s), diners will find that items like spaghetti with meatballs and lasagne still have pride of place on the present-day menu.

In previous decades, Mocambo was also a top spot for dancing. Kolkatans could let loose on the restaurant’s colourful glass dance floor (revolutionary at the time), and jive to the tunes of a live six-piece band. These days the dance floor, musicians and dancers are a memory, but the original decor of red sofa-style chairs and orange hanging lamps is intact.

Listen to live music at Trincas

Fifty years ago, it was not uncommon to see ‘Elvis the Pelvis’ imitations on the dance floor at Trincas, as the restobar was the beating heart of Kolkata’s rock and roll scene. Bands like Savages, the Trojans and Flintstones were in the spotlight, making their teenage and twenty-something audiences groove until dawn. Usha Uthup, a popular playback singer who had a huge fanbase also took to this storied stage, once memorably performing a foot-stomping version of ‘Fever’ in a sari. The Trincas stage is currently graced by an in-house English band called Sweet Agitation, a Hindi band, and sometimes eager members of the audience.

In its heyday, people would queue around the block to get into Trincas. Though it isn’t as popular today, the venue has hosted Bollywood stars including Amitabh Bachchan and Rekha, and continues to draw in music-loving crowds.