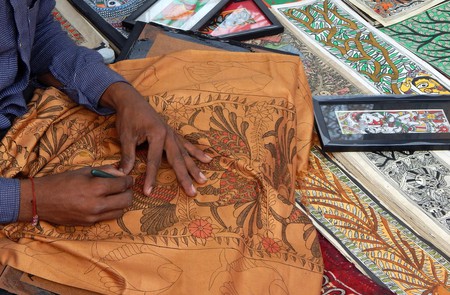 India’s Gond tribe are renowned by art aficionados for the vibrant artwork they produce. In their work, animals, plants and scenes from daily life are rendered in a colourful, highly patterned style comparable to aboriginal art. But up until the 1980s, Gond tribal art was all but unknown to outsiders, used only to decorate their homes. Forty years later, it is exhibited in galleries worldwide. The story of how this happened is a fascinating yet tragic one.

Most Gonds follow Hindu customs, but some are animists. They believe that natural objects – mountains, lakes and animals – are inhabited by a spirit or life force. These spirits should be respected and painting them is a way of showing reverence.

The Gonds also have a tradition of painting the walls and floors of their huts during important Hindu festivities. They draw scenes from religion and myth, as well as natural objects. Before mass-produced paints were available, natural pigments were used and the tribe’s artwork was rarely, if ever, committed to paper. But one day in 1981, everything changed. 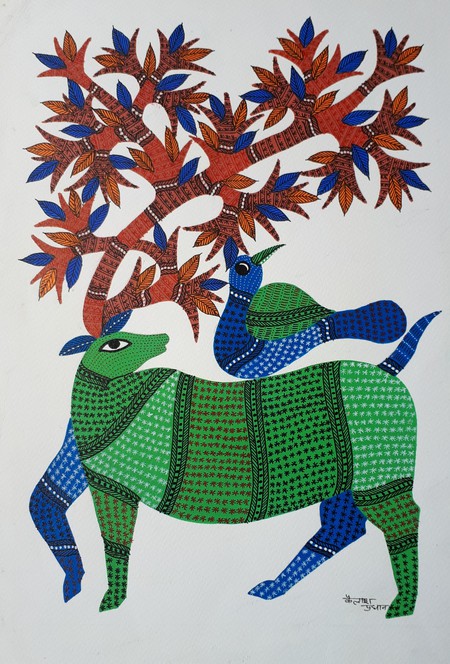 From wall to canvas: the discovery of Jangarh Singh Shyam

In 1980, a major new art centre, Bharat Bhavan, was built in Bhopal. The man in charge, Jagdish Swaminathan, wanted to exhibit both modern and indigenous art and so, he sent out scouts in search of talent. A year later, a 17-year-old Gond, Jangarh Singh Shyam, was discovered. After seeing the murals Jangarh painted, Jagdish persuaded him to move to Bhopal and experiment with paints and canvas.

Jangarh began to create hypnotic paintings bursting with colour and motion. His reputation spread rapidly. After exhibiting at Bharat Bhavan, he gained international attention. In 1989, his work was displayed at the ‘Magiciens de la Terre’ exhibition in Paris. Just over a decade later, he took up a prestigious residency in Japan, at the Mithila Museum in Niigata. 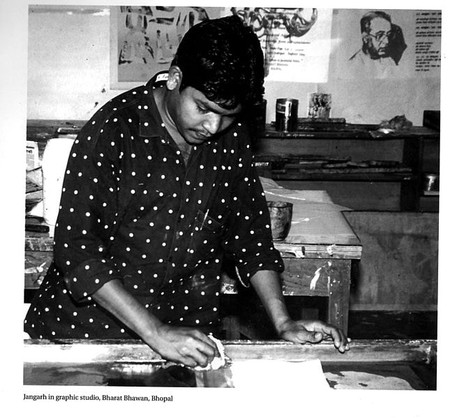 However, the residency in Japan was cut short. In 2001, Jangarh was found hanged in his room, aged only 37. His death shocked the art world. Stories began to spread that he had been coerced into doing the residency for a low monthly fee. In an article written in 2001 for India Today, S. Kalidas elaborated, ‘According to his wife, he had wanted to return to India. But Hasegawa had taken possession of his ticket and passport and had his visa extended by another three months’. It is believed that this could have caused the depression that led to his suicide.

Although the circumstances surrounding Jangarh’s death remain murky, a clear message emerged from the tragedy – the importance of preventing the exploitation of vulnerable artists. Despite his talents, Jangarh’s work was undervalued during his lifetime. After his death, some of his art was collected in a book called Jangarh Singh Shyam: The Enchanted Forest. In the preface, art collector Mitchell Abdul Karim Crites recalls a visit where Jangarh insisted he buy some paintings:

He replied in a soft voice, ‘My buffalo has died’.

I put in front of him the drawings we liked and said show us which ones will ‘do the needful’ as they say in India. I had no idea what a buffalo cost, so Jangarh slowly counted them one by one and when he reached the total he needed, he stopped and solemnly handed them to me saying, ‘Mitch Sahib, THIS is a buffalo’.

In 2016, one of Jangarh’s artworks was sold for $12,660 – significantly more than a buffalo. He was not around to benefit, but this showed that the value of Gond artwork and its popularity was increasing.

After Jangarh’s death, there was an increased concern in preventing the exploitation of artists. Many organisations today help indigenous and folk artists promote and sell their work. The Must Art Gallery in New Delhi is devoted to exhibiting folk and tribal art in India, while the Hundred Hands Collective organises a bazaar of traditional handicrafts, clothes and artwork. Kailash Kumar Pradhan, the artist whose work illustrates this feature, exhibits here. 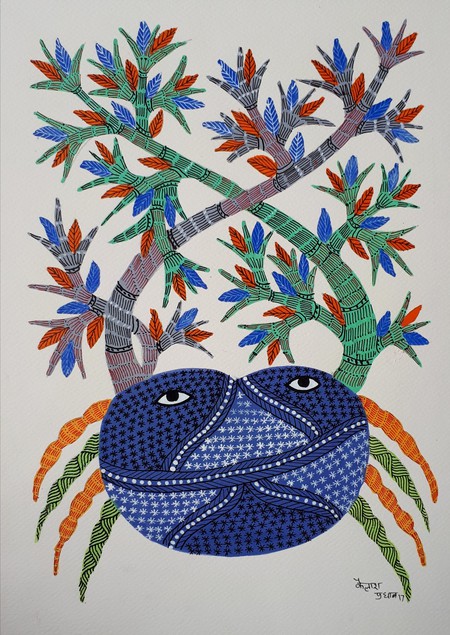 Jangarh has inspired a legacy of Gond tribal art. Each artist has a different ‘signature’ – the patterns of dots and dashes they use to fill in paintings – which makes their work distinct. Contemporary Gond artists want to preserve tradition and depict contemporary life. In the work of artist Venkat Raman Singh Shyam, the ancient and the modern coexist alongside each other. He’s just as likely to paint a picture of a computer or a cycle rickshaw as he is an ancient deity.

As well as helping preserve the tradition of Gond tribal art, it’s also important to celebrate and encourage its contemporary evolution.