The Best Hotels in Delhi, India 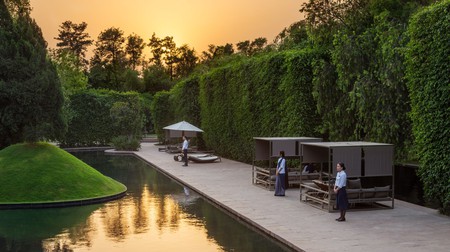 Whether you’re visiting the Gandhi Smriti Museum, sampling Chandni Chowk’s street food or just en-route to Agra’s Taj Mahal, India’s capital city is well worth a closer look. We’ve hand-selected some ideas on where to stay in Delhi with the finest hotels from the city’s overwhelming array.

There is a common saying in Indian homes that “the guest is god”. The joy of hosting is an integral part of the country’s culture. It’s a custom that isn’t limited to private homes; when you spend a night at a hotel in India, you’ll find yourself feeling like a pampered house guest. These hotels, especially, know how to get hospitality right. 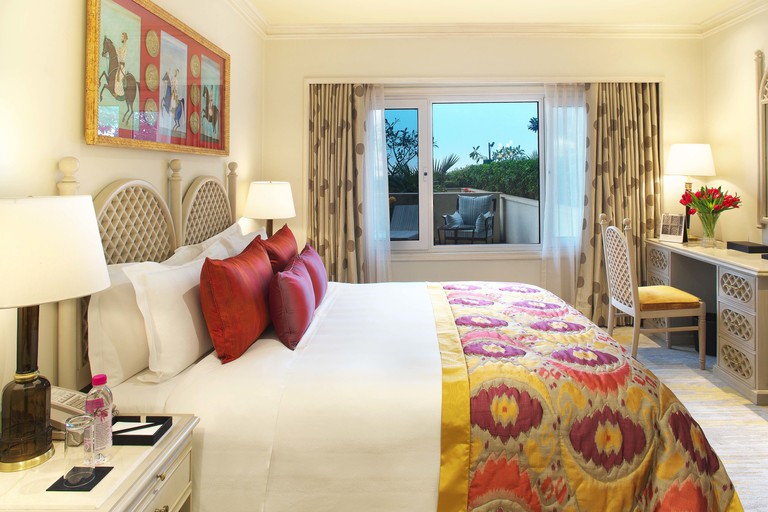 Courtesy of Taj Palace / Expedia
The fact that it’s located on the edge of Buddha Jayanti Park, one of the most beautiful and greenest parks in New Delhi, is a huge draw when staying in the capital city. Inside, the mix of Indian art, personal service and unapologetic grandeur will transport you miles from any sign of reality. The building itself is a curved 1980s show-stopper with 403 luxurious rooms and suites. The spa menu offers only Indian treatments using local herbs and oils.

Courtesy of The Roseate New Delhi / Expedia
A James Bond villain would feel quite at home in this designer oasis. Enjoy next-level calm and luxury not far from Delhi airport, with 3ha (8 acres) of gardens and a 108m (354ft) outdoor swimming pool. The reception lies behind enormous circled doors, and beyond that, elegant walkways criss-cross water between the restaurants, spa and rooms. All services, from food to spa appointments, are controlled on your in-room iPad. Make time for the spa’s signature massage, a mix of Swedish, aromatherapy, shiatsu and Thai influences. 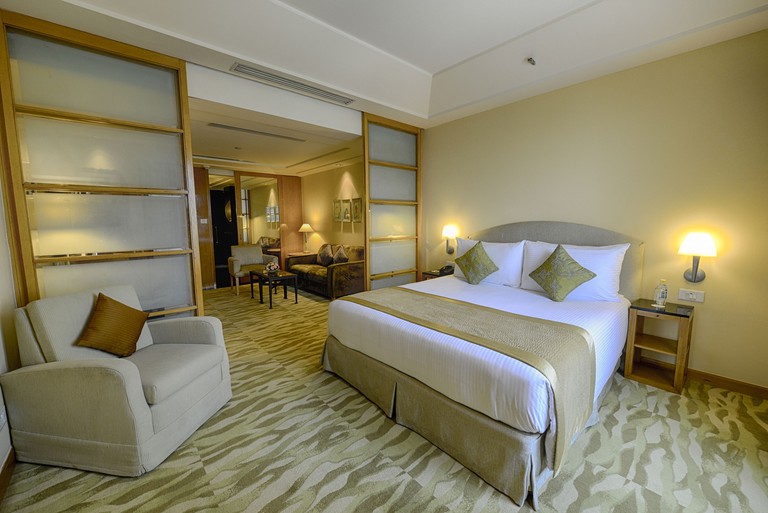 Courtesy of The Grand New Delhi / Expedia
Lose yourself in luxury at this cavernous five-star hotel, only 9km (5.5mi) from New Delhi international airport. Accommodation runs from standard rooms to a presidential suite and six serviced apartments. The grounds channel French courtyard vibes, with a huge outdoor swimming pool to relax in. While this is opulence on a major scale, the well-versed staff keep service personal. Dinner at Caraway, the Indian brasserie, is a must – the head chef takes pride in regularly changing his recipes and cooks in an open tandoor. 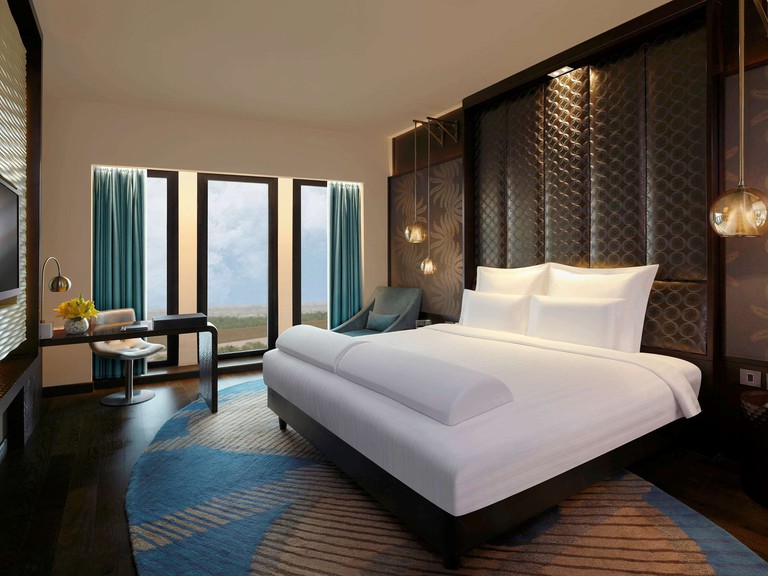 Courtesy of Pullman New Delhi Aerocity / Expedia
Choose to stay here, and in under 10 minutes you’ll be whisked from airport arrivals to the hotel lobby; it’s that close. The rooms are modern and soundproofed, with comforts including oversized leg support pillows and a free massage at the spa. Guests get 15 percent off at the six restaurants. The creatively named Farmer’s Market at Pluck is an eatery set out like a fancy food market with a “you choose, we cook” concept – all ingredients come from local producers or the kitchen garden at the hotel. Check out Pling, the jazz and blues bar, for a nightcap. 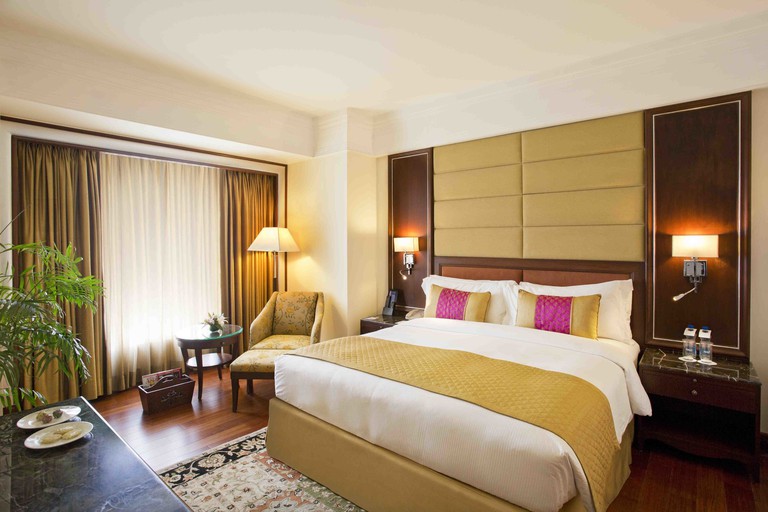 Courtesy of Eros Hotel New Delhi / Expedia
This five-star hotel is opposite the Lotus Temple, a beautiful white structure that is dedicated to the Baha’i faith and is one of the most popular attractions in the city. The charming and efficient staff have been welcoming a mix of business travellers and tourists for more than 25 years thanks to its close proximity to the business district as well as the local attractions and restaurants. A morning on the nine-hole putting green is a fun and novel activity in such a chaotic city. 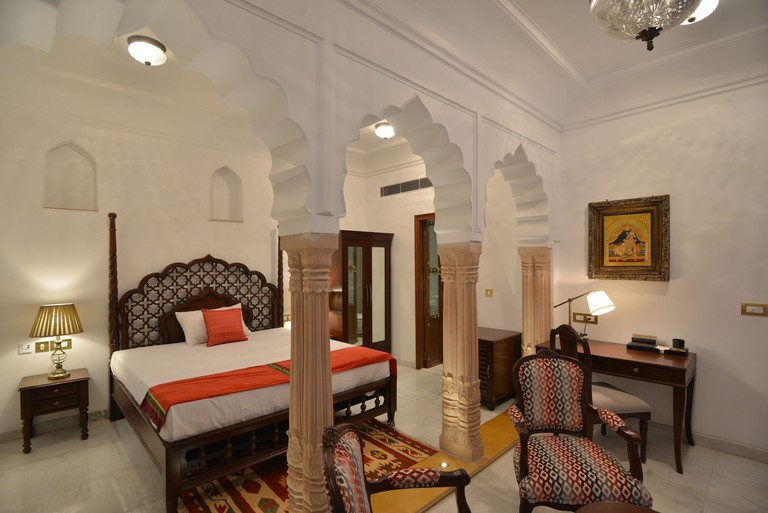 Sleep among rich Mughal architecture at Haveli Dharampur, which dates back to 1887. It took four years of gruelling restoration work to convert it from a period manor into a beautiful heritage palace with modern facilities. Its 14 rooms and suites surround a courtyard lined with elegant cusped arches and delicately carved wood. Rooms are dotted with antique furniture, and windows open onto the narrow streets of Chandni Chowk – among the oldest markets in Delhi – which are bursting with sari makers, restaurants and sweet shops. 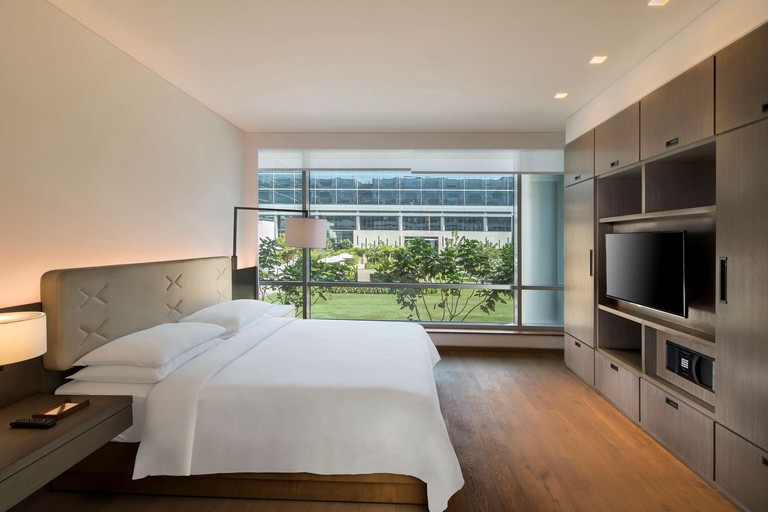 Andaz Aerocity is giving airport hotels a better name. With no clinical corridors or sparse rooms to speak of, the hotel features a modern design that includes huge windows flooding even the standard rooms with natural light. Its collection of bars and restaurants wouldn’t be out of place in a high-end city-centre hotel either. The Hong Kong Club restaurant and bar is one of the few in the city that stays open until the early hours. Its dumpling menu deserves special mention – the lobster, crab and spinach dumplings, in particular, aren’t to be missed. After dinner, head to its Juniper Bar for impeccable gin cocktails. 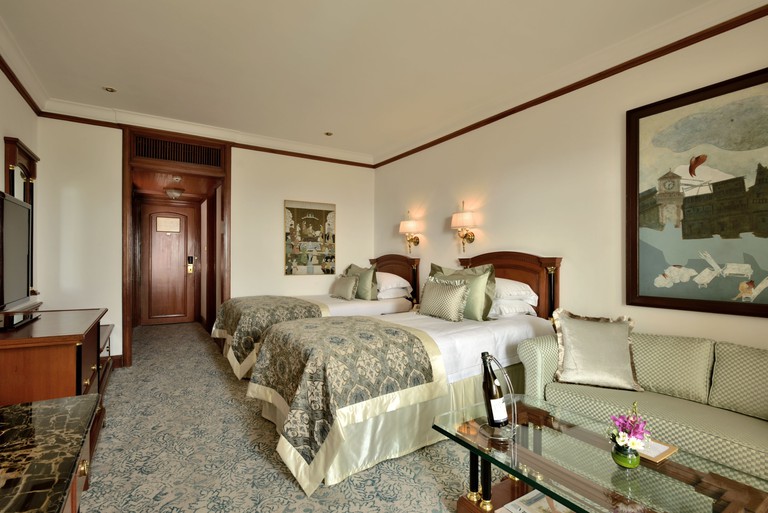 Courtesy of The Taj Mahal Hotel / Expedia
When you book into a Taj hotel, you know you’re paying for warm, flawless hospitality. The Taj Mahal Hotel in Delhi is no exception. All the rooms come with marble bathrooms and views over Lutyens’ Delhi, an upmarket neighbourhood named after the British architect who designed it. Club rooms have thoughtful extras, such as in-room yoga mats and daily afternoon tea and cocktails in the Taj Club Lounge. The grand marble staircase and domed gold ceiling in the lobby set the tone for the decor throughout. You’ll find traditional Indian artwork on the walls and an outdoor pool surrounded by lush greenery. 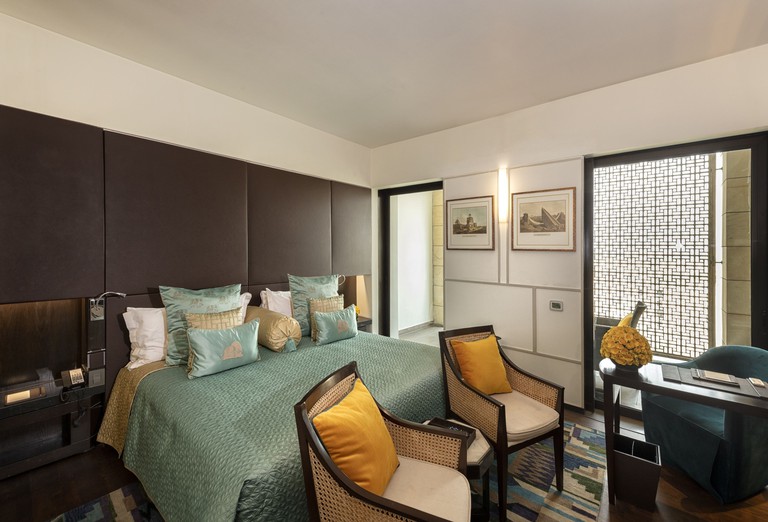 Courtesy of The Lodhi / Expedia

The Lodhi is all about modern luxury. If you’re going to splash out on a suite, it’s worth doing so here – they come with butler service, private plunge pools and huge daybeds. The other rooms aren’t to be sniffed at either, featuring super-king-size beds, goose-down pillows, Illy espresso machines and Bose speakers. The hotel is also home to the Indian Accent restaurant, which consistently makes the San Pellegrino 50 Best Restaurants in Asia list. You can also head to the neighbouring Khan Market, a hub for the best standalone restaurants in Delhi. 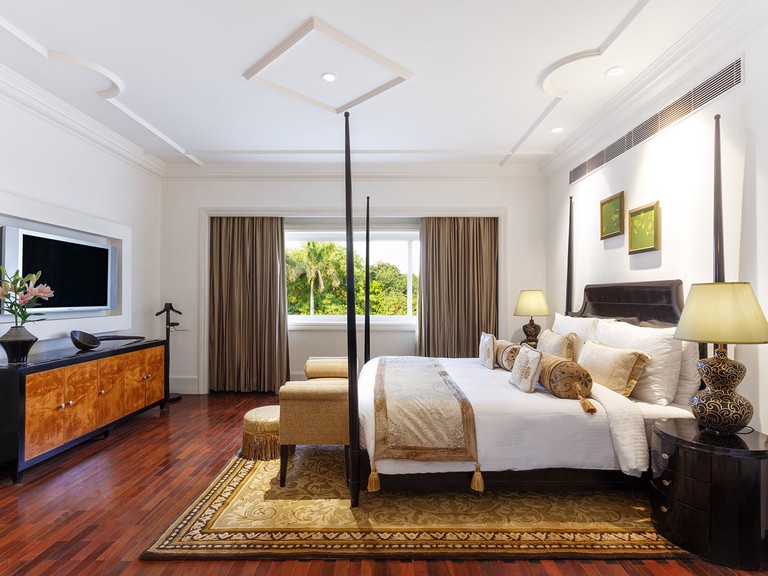 Courtesy of The Claridges / Expedia
In the heart of Lutyens’ Delhi, the Claridges stands out for its sweeping gardens and spacious rooms. Its proximity to parliament ensures the hotel is regularly frequented by politicians. Here you’ll find casual grab-and-go cafés for busy sightseers, as well as romantic Mediterranean restaurants. The bright, airy rooms are all about classic luxury, with huge comfy beds, big windows and marble bathrooms; most rooms overlook the pool, where you can cool off during spells of Delhi’s intense heat. The shop outside the Claridges serves up paan (an after-dinner Indian treat) and is a local city treasure. 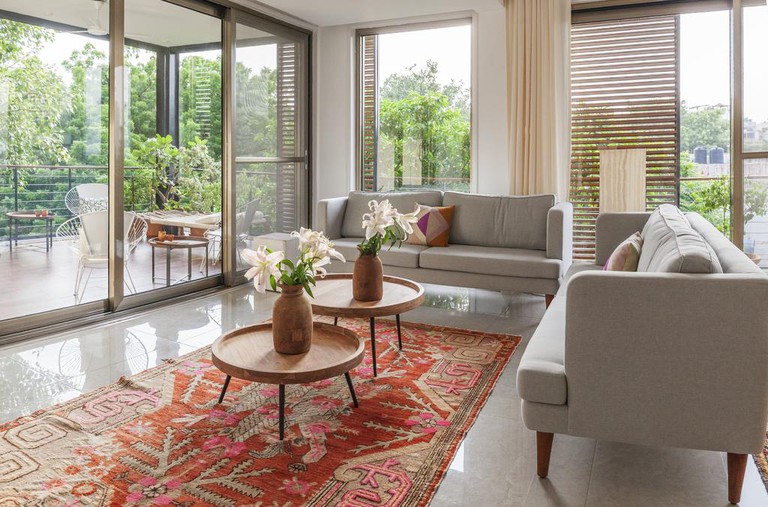 If you’re travelling with kids or plan to stay in Delhi for an extended period, choose this homely hotel. The sleek, modern apartments have three-bedrooms, a balcony, bathrooms with deep soaking tubs, and a large kitchen. Housekeeping comes as standard. The hotel is in Defence Colony, which has its own market with local restaurants and grocery stores, where you can either track down a creamy plate of butter chicken or try your hand at whipping it up yourself. 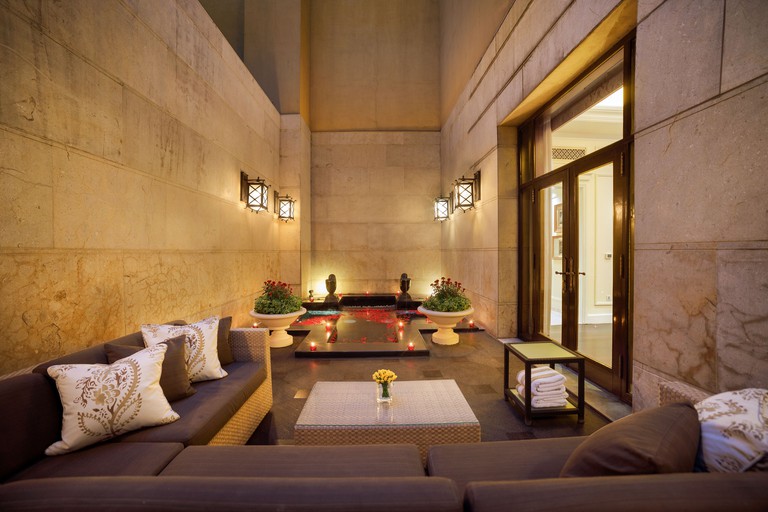 Courtesy of The Leela Palace / Expedia
The Leela Palace in Chanakyapuri markets itself as a modern palace, which sums the place up perfectly. Rooms are decorated with maximalist opulence and charming decor that harks back to the Mughal Empire palaces. Dishes served at the Indian restaurant Jamavar are based on the food of royal kitchens – such as tandoori murgh and saffron lamb – though you can also choose Japanese at Megu or a French–Italian tasting menu at Le Cirque. The real showstopper, however, is the rooftop infinity pool, which offers panoramic views of the city, including the Lotus Temple and Qutub Minar, Asia’s tallest minaret. 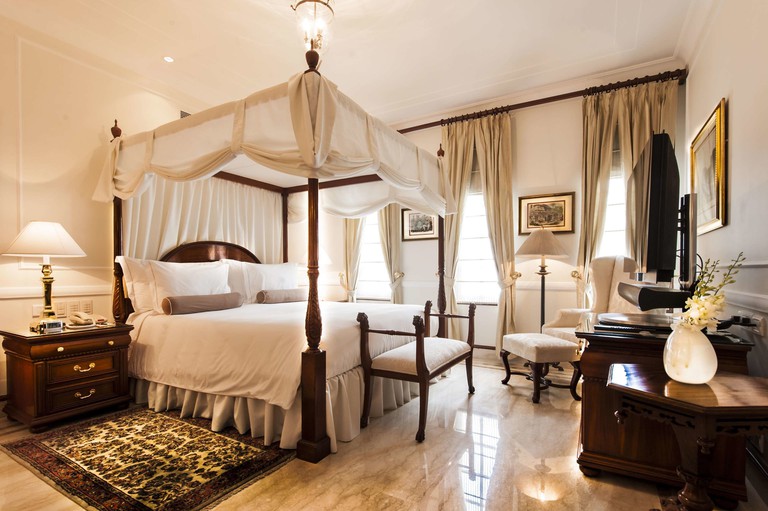 Courtesy of The Imperial / Expedia

The elegance of the Imperial Hotel takes you back to British colonial India. On every wall you’ll find paintings, photographs and delicate murals illustrating Delhi’s history, making the space feel as much like a beautifully curated museum as a luxury hotel. In fact, the hotel has three galleries dedicated to colonial and post-colonial art – book a tour to make the most of them. Its award-winning restaurant, the Spice Route, takes you on a food trail through the southern coast of India, ending at Sri Lanka. It also has an award-winning spa with Ayurvedic treatments and an outdoor pool.

For a bit more pampering, why not check out the best luxury hotels in Delhi. Or if you’re on a budget, discover these cheap hotels, bookable with Culture Trip.