The Top 10 Things To See & Do In Lucknow 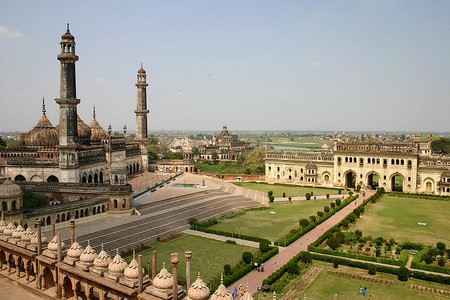 View of the Mosque | © Tushar Dayal/Flickr

Lucknow is the capital of Uttar Pradesh and the architectural hub of Northern India. The skyline is crowded with buildings that showcase a fascinating range of ancient styles, most of which date back to Mughal or British rule. The city itself is famous for many aspects of its rich culture, from music, poetry, and embroidery to technology, finance and pharmaceuticals. From those rich roots, we’ve dug up the top 10 sights and things to do in Lucknow. 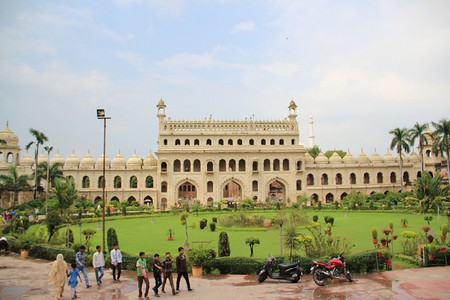 The Bara Imambara was built in the year 1784 by Asaf-ud-Daula, the fourth Nawab of Awadh. Created as part of a famine relief program, it marks one of the earlier attempts in Lucknow to imitate the structure of a Mughal complex. This is one of the few buildings in Lucknow completely devoid of European elements. The building is part of the Asaf-ud-Daula Imambara Complex, which contains a mosque, several courtyards and gateways, and a ‘bawali’ or step-well that was once used as a summer palace. The central hall of Bara Imambara is said to be the largest arched hall in the world: over 15 meters tall, the arch remarkably spreads across 800 square meters but requires no ceiling support beams or pillars, standing steady to this day. The Bara Imambara is also well-known for a second architecture marvel, the incredible maze of Bhulbhulaiya. Its labyrinthine passages are interconnected across 489 identical doorways, and if you reach the top successfully, you’ll be rewarded with a breath-taking panoramic view of the city. Legend holds that great treasures are hidden away in secret tunnels of this maze, so keep your eyes peeled on the way up.

Zoo, Park
Facebook
Email
Twitter
Pinterest
Copy link
Share
The Lucknow Zoo is one of the city’s main tourist attractions. Frequented by locals and outsiders alike, this zoo has been instrumental in educating Lucknow’s masses about the importance of the environment and preserving wildlife. The Lucknow Zoo is home 447 mammals, 348 birds, and 57 reptiles, and between those many creatures you’ll find 97 different species of wild animals. Their most popular inhabitants include the Royal Bengal tigers and white tigers, as well as lions, wolves, Hoolock gibbons, Himalayan black bears, and Indian rhinoceros. Those drawn to the zoo’s birdlife may find golden pheasants and silver pheasants roaming together, or catch a glimpse of the Great Pied Hornbill. This Zoo features ‘Touch Table Programmes’ on Fridays organized by The Nature Interpretation Centre. This tactile educational experience is a hands-on chance to learn about the skins of various animals, the eggs of birds and pheasants, the tusks of elephants, and much more. Since 1969, the zoo has also operated a Toy Train for family entertainment. Admission Fee: Budget
Opening hours: 9am-6pm

The British Residency of Lucknow is a famous historical landmark. This large collection of gardens and ruins offer a fascinating historical glimpse into the first stages of the fall of the British Raj; the British Residency once served as a refuge for approximately 3000 British inhabitants during the time of the uprising of 1857 (India’s first revolt against the British for independence). The compound has been left as it was at the time of the final relief, and the walls are still marked from those bullets and cannon balls.The Residency’s grounds also contain around 2000 graves of British soldiers who died during the struggle. The main Residency building hosts a museum which is a must-see for your visit to this site of rich historical conflict. 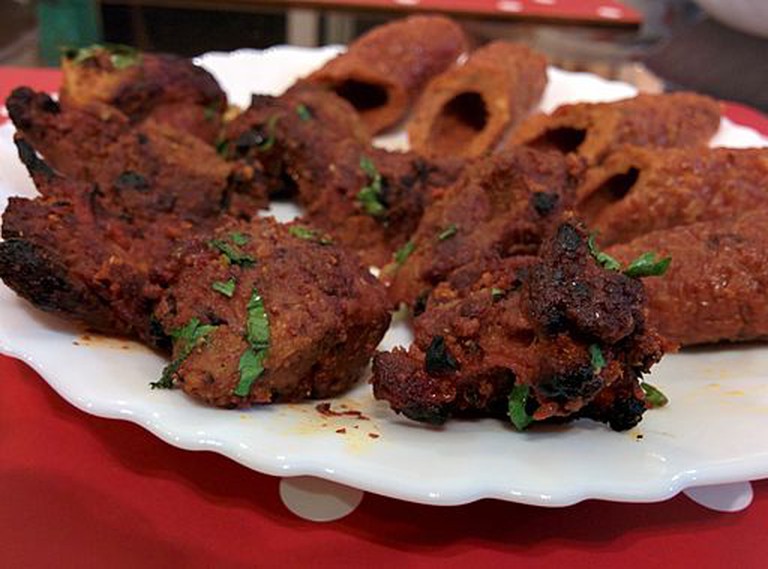 Sheekh Kebabs | © SubtlePen/WikiCommons
Located inside the British Residency, the 1857 Memorial Museum contains exhibits that showcase the story of 1857 in a chronological order, offering a detailed and accessible history of the first Indian Rebellion for Independence. Part of the display is formed by diorama, while canvas paintings, photographs and lithographs portray some of the battles at The Residency and other important scenes tying into the narrative. Recently, a new gallery was added to the museum’s basement showcasing artifacts recovered in an excavation of the southern portion of the Residency complex. It’s an important place to visit while learning about Lucknow and India on a greater scale, as this will help you understand the first battle which led to a century-long struggle for India’s independence from the British. Admission Fee: Budget
Opening hours: 10am-5pm

Located in the lobby at Vivanta by Taj, you can be assured of the finest dining experience in the city when you visit Oudhyana. Exquisite chandeliers twinkle down at you here as you walk to your table, where the extremely gracious and knowledgeable wait staff will serve you the very best in Awadhi and Mughlai cuisine. From the melt-in-your-mouth kebabs to the rich parathas and delicious biryanis, every dish is delectable and expertly spiced, adding richness and intensity to every bite without overpowering the flavor.

Indira Gandhi Planetarium is a special attraction that’s unique to Lucknow, situated at Suraj Kund Park on the bank of the River Gomti. In Lucknow’s architecturally ambitious fashion, this planetarium was erected in 2003 with a novel shape imitating the planet Saturn complete with outer rings. Inside, the building is completely air conditioned and boasts of a state-of-the-art projection system equipped for all kinds of cool special effects during screenings. They offer daily shows to help patrons better understand the workings of the cosmos, which have proven quite popular in the few years since they’ve opened. 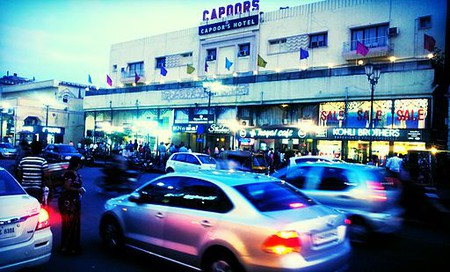 Hazaratganj is a major shopping district in the heart of Lucknow. It was first established in 1810 by Nawab Saadat Ali Khan, who had acquired the throne with the help of the British in January 1798. Named after Hazrat Ali, the fourth caliph, this market has several lanes that were historically bohemian, frequented by artists and patrons of music, perfumes and poetry. Throughout the ages, this market was a favorite of British officials, Nawabs, and zamindars alike for leisurely walks through the center of town. Today, Hazratganj is a busy area where you’ll find a high concentration of Lucknow’s local bazaars. Shoppers may walk away with a traditional white Chikan (a type of hand embroidery using cutwork and shadow work), or a brand new kurta or saree. 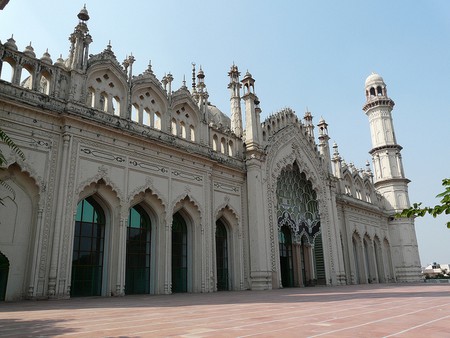 Jama Masjid is a prominent mosque, and also one of Lucknow’s most famous tourist spots. Erected by Sultan Ahmed Shah in 1423, the structure was built entirely with yellow sandstone, and is revered today for its intricate designs and stunning combination of Hindu and Muslim architecture. You’ll notice many elaborate carvings in the pillars aesthetically inspired by Jain and Hindu culture. The Jama Masjid is spread over a staggering 4,950 square metres, with a total of 260 pillars supporting the western chamber alone. On the eastern entrance, you’ll find the tomb of Sultan Ahmed Shah himself.

A special service from the Uttar Pradesh Tourism department, the Lucknow Heritage Walk is a fun guided adventure to get a feel for the real Lucknow beneath your feet. After arranging your walk time via mobile phone or through their website, you’ll meet your English-speaking guide at the starting point outside Tila Wali Masjid. From there, you’ll follow them first around the mosque, then to the Bara Imambara, and then delve into a fascinating maze of alleyways in Chowk district. Along the way you’ll get to sample many local nibbles like thandai (made from milk, cardamom, almonds, fennel, saffron and maybe marijuana), while catching glimpses into shops selling historic old coins, the place where Gandhi stayed on his visit to Lucknow, and much more. 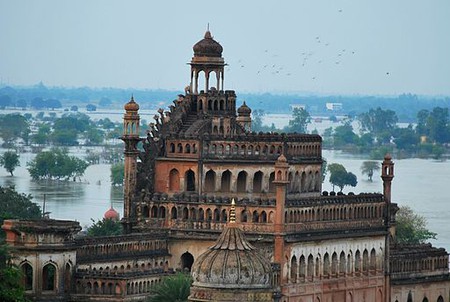 The Rumi Darwaza of Lucknow is one of the most impressive structures in all of India. It was built in the year 1784 by Nawab Asaf-ud-daula, under the ‘Food for Work’ program he initiated to help the city’s population get through a brutal famine. Completed in that same year, the gateway stands 60 feet tall and was modeled after elaborately decorative gateway styles found in Constantinople (which is Istanbul today), adorned with beautifully carved flowers and designs. Like the Bara Imambara’s arch (which stands to the West of Rumi Darwaza), this structure has no other supplementary fittings of wood or iron to support the structure from outside, but it remains steady to this day. On top of the building, there’s a tower space that once held a massive lantern to light the tower up at night. This is an especially grand example of Awadhi architecture and well worth a visit.