The Top 10 Things To See & Do In Aurangabad

Bibi ka Maqbara | © Andrea Kirkby/Flickr
Recently declared the ‘Tourism Capital of Maharashtra’, Aurangabad serves as a major tourist hub for the state of Maharashtra. This city offers its visitors a rich tapestry of sights, sounds, and textures, from ancient UNESCO Heritage Sites to markets brimming with exquisite silk items and gorgeous hand-woven garments. You will definitely need a few days to experience everything this town has to offer, but to save you some time, we’ve mapped out ten must-see sights and activities for a seamless, stimulating journey through Aurangabad.
Aurangabad Caves © Nefirious/WikiCommons

Carved from soft rock during the sixth and seventh century, the Aurangabad Caves are sadly often overshadowed by the more touristy Ajanta and Ellora caves, but make for a delightful trip in their own right. There are 10 caves to explore in all, separated into two different locations, the Western Group Caves and Eastern Group Caves, which are located 1 km apart. Cave 7 is a definite crowd favorite, featuring scantily-clad sculptures of lovers in suggestive positions.

Yalla Yalla is a fresh face in Aurangabad’s dining scene. This brand new venue has already managed to attract a sizable crowd with its alluring menu of North Indian cuisine. Meat lovers will swoon for the achari chicken and the mutton dim biryani, while seafood fans should take note of the delicious prawn koliwada. Those who like both should go for the shami kebab, containing a mix of spiced meat and fish. Whatever you order, be sure to end on a sweet note with a bowl of their sublime caramel custard. 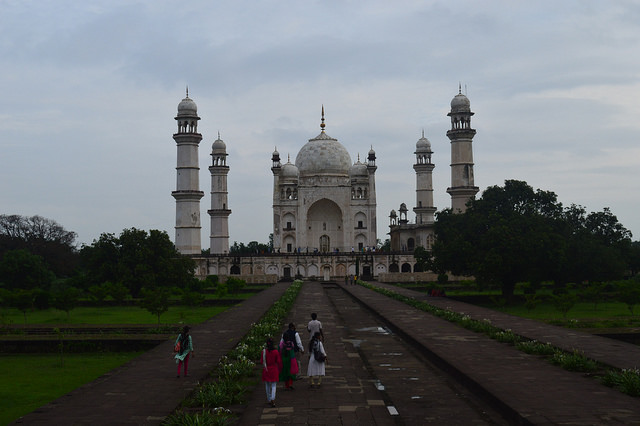 The Bibi-Ka-Maqbara is a beautiful mausoleum of Rabia-ul-Daurani (alias Dilras Banu Begum), the wife of the Mughal Emperor Aurangazeb. It is the sole example of Mughal architecture in this part of India, chiefly designed by the Persian architect Ustad-Ata-Ullah. Similar to Taj Mahal, Bibi Ka Maqbara’s silhouette is defined by four towering minarets. An octagonal lattice-screen of white marble surrounds the raised plinth, supporting Rabia Daurani’s grave inside the tomb. The tips of its pillars are made of red stone, resplendent at sunset. It’s extremely beautiful in the morning, when the sun’s first rays cast the mausoleum’s reflection on the water.

Siddharth garden is a landscaped garden featuring a variety of finely sculpted shrubs and trees. The garden also features a small aquarium, though the major attraction of the tourist is the Siddharth Garden Zoo. The zoo is inhabited by a wide range of exciting wild creatures, including tigers, lions, leopards, snakes, crocodiles, deer, hyena, and more. Pack a picnic and visit the garden on the weekend for a wonderful family outing.

Bhadra Maruti Temple is a well-known temple dedicated to Lord Hanuman, located near Aurangabad in Khuldabad. Local legend has it that Bhadrasena, a past ruler of the region and devotee of Sri Rama, once sang songs in praise of Lord Rama; these songs attracted the attention of Hanuman, who came to reside in the temple at the King’s request. The temple is constructed with white marble, and the idol of the sleeping Hanuman is placed in the center. It is one of the only three temples where you will find Hanuman in a sleeping posture, reflecting his restful time here in the Bhadra Maruti legend.

Valley Of the Sufi Saints

Located in nearby Khuldabad, the Valley of the Saints is a holy shrine for Muslims. This was where several Sufi saints of the Chishti Order chose to reside in the fourteenth century. The tombs of the last great Mughal emperor Aurangzeb and Sufi saint Muntajib al-Din are located here, as well as the dargah of Moinuddin Chishti of Khuldabad. The best time to visit is between the months of October and February, when the weather is at its best for enjoying the shrine’s gorgeous mountainous scenery and neighboring attractions: he famous Ellora caves and Jyothirlinga Grishneshwar temple can also be found close by. Khuldabad is situated at a distance of about 20 km from the city of Aurangabad, but is easily accessible via bus services, auto rickshaws and shared taxis.

The Ellora Caves were built between 350 AD and 700 AD, and shed light on the tolerance of the people of ancient India who were ready to accommodate other beliefs and faiths. There are 34 caves contained within two kilometers, with rich facades and sculptures representing three separate religions: Buddhism, Hinduism and Jainism. The 17 caves in the center are devoted to the Hinduism, the 12 caves found in the South are Bhuddist, and the last 5 caves located to the North are Jain. The architectural expertise, the diversity of history and religion, and the centuries of effort undertaken by the artisans in carving this space out of the rock are enough to leave one speechless.

The Ajanta Caves are a UNESCO Heritage site showcasing Buddhist narrative artwork of the period between 200 B.C. and 650 A.D. Centuries later, this group of caves was rediscovered by chance when a few British Officers were out hunting tigers in the area. There are 29 caves to explore in Ajanta, painstakingly constructed by Buddhist monks using simple tools like hammers and chisels. The paintings and sculptures of the caves portray stories from the Jataka tales, was well as arresting images of ancient princesses and nymphs. Restaurant, Vegetarian, Dessert, European, Indian, Asian, $$$
Bhoj is the top restaurant in Aurangabad for thalis, or set meals / Pixabay
Bhoj is a very famous restaurant in Aurangabad specializing in thalis,or set meals. Unlike set menus in Europe and North America, which tend to come out in several predetermined courses, a thali is served in a single round platter broken up into various dishes. For a taste of what’s in store for you, the most basic thali would consist of phulks (Indian bread), two to three vegetable preparations, a curry, lentil soup, rice, and a dessert. Oodles of ghee (clarified butter) are used in every aspect of the meal for totally decadent, mind-blowing flavor. Price: Mid -range
Opening hours: 11am-3.30pm 7pm-11pm
Watch out for: the satisfaction you’ll feel when you polish off your first thali
More Info
Open In Google Maps
Samarth Nagar Aurangabad, Maharashtra, 431001, India
+918007774887
Visit Facebook page

Located near Daulatabad in Aurangabad, Grishneshwar Jyotirlinga is believed to be the last Jyotirlinga temple on the planet. Jyotirlinga is a devotional object representing the Supreme God Shiva. The entry into the temple is free, though if you wish to make an offering to Shiva, a small payment has to be made. The temple stands as a unique example of pre-historic architectural style, structure and tradition, and the intricate inscriptions covering the temple walls attract admiring travelers from far and wide. It also houses beautiful carvings and sculptures of many Indian Gods and Goddesses. Holy water is known to spring from inside the temple to this very day.