The Top 10 Things to Do and See in Jodhpur

One of the most historic cities in India, Jodhpur’s roots reach as far back as the sixteenth century. Nestled right in the middle of Rajasthan, a deeply cultural state where inhabitants still wear the traditional garb of their ancestors, Jodhpur is called the “Blue City” thanks to the vibrant egg-blue homes that surround its famous Mehrangarh Fort. Jodhpur topped Lonely Planet’s top places to stay in 2014, and below are ten of the best reasons why. 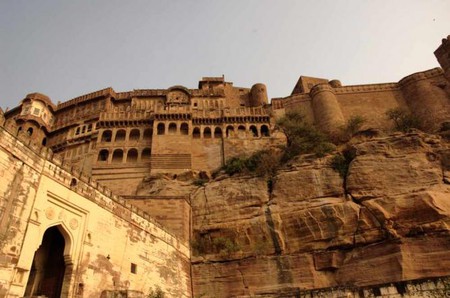 Almost anyone who has visited the Mehrangarh Fort will tell you the same thing: the time to fully take in the architectural masterpiece is either during sunrise or sunset, when the glow from the golden walls is levelled just right against the fiery crimson sky. The amalgam of colors is almost unbelievable: glittering blue homes that smell of incense and rosewater surround the mighty fortress, which still towers 400 feet above ground despite being over five centuries old. Visit Mehrangarh for the chilling feeling of standing on history and the incredible bird-eye views of Jodhpur. 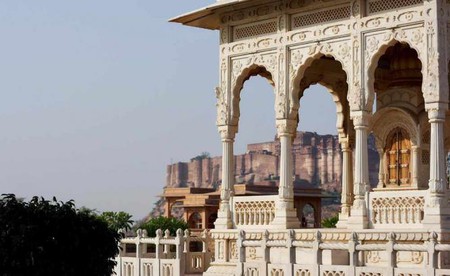 Just a short walk from the Mehrangarh Fort you’ll encounter Jaswant Thada, a ivory marble relic built at the turn of the twentieth century. A spectacular memorial commissioned by the royal family in remembrance of Maharaja Jaswant Singh II, it overlooks a quiet blue-green lake from a considerable height, muting the sounds of the busy city around it. The most you’ll hear at Jaswant Thada, apart from fellow visitors gasping in awe at the cream-colored cenotaph, is the sound of the flute coming from inside the temple.

You don’t need to go all the way to the Amazon Rainforest for an aerial adventure – you can get the experience from the comfort of the Mehrangarh Fort. The Flying Fox Jodhpur zipline tour is made up of six cables that stretch across the fortress walls, flying you around the battlements, lakes and valleys of Jodhpur. Every flight comes with a guide to ensure safety and provide extensive expertise on everything from the history of the mighty fort to the topographical elements of Rajasthan.

A little-known gem situated right next to the rocky expanse of land next to Mehrangarh Fort, the Rao Jodha Desert Rock Park is an ecological restoration site that was converted to a public park in 2006. Years of neglect caused the area to be overrun by a thorny shrub, turning it into a wasteland. Today there are 80 species of flowers growing in the park, and an ancient aqueduct called the “gully” now runs peacefully throughout the entire park. Visitors come here for the relaxing sounds of running water and chirping birds, because you won’t hear much else in this quiet oasis. 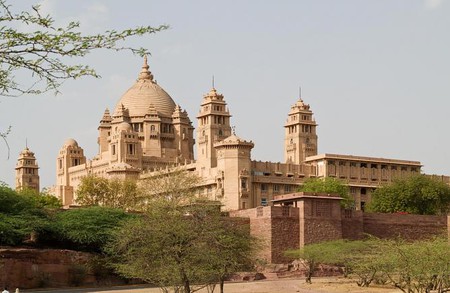 Umaid Bhawan is a structural behemoth-turned-hotel that also happens to double as a living museum. In preserving the iconic yellow sandstone, Renaissance-inspired cupolas and Rajasthani towers of its original 1928 construction, it achieved cult status as a luxury hotel. Over 26 acres of lush gardens are decorated with flora that leave the entire palace perfumed with the scent of rose and jasmine, and each night the terrace is lined with lit lanterns that bequeath the palace a golden halo.

Santoshi Mata is an incredibly important goddess in the Hindu belief, known as the Mother of Contentment and enshrined at the Santoshi Mata Temple. Local devotees, especially women, frequently make trips here to ask for her blessings, especially on Friday as it is considered to be Santoshi Mata’s special holy day. If you’re here less for the spiritual experience and more for the aesthetic one, you won’t be disappointed. The temple is sculpted skillfully from brownstone, rising well above the desert city.

The Pukhraj Durry Udhyog is a family-run rug weaving co-operative based in the small village town of Salawas. The owner, Chhotaram, loves to give visitors impromptu tours of his enterprise, posing for pictures with them even as he continues to weave vibrant threads together. Each rug boasts a unique design, with an option for customization if you have certain colors and patterns in mind for Chhotaram. The prices are highly affordable, but being able to take a token of Jodhpuri heritage back home with you is invaluable. 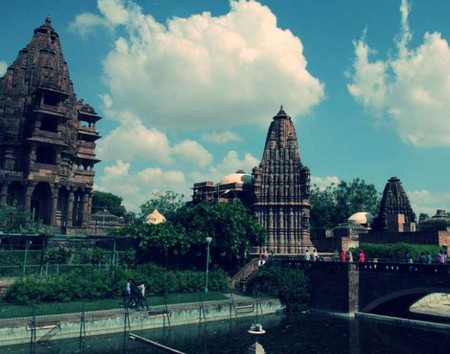 The Mandore Gardens are located less than four miles from the main part of the city, so it’s hardly a trek to see this beautiful, serene space. The gardens are peppered with stone-carved temples and the ruins of cenotaphs dating back to the 1400s. The calm and quiet atmosphere makes it the ideal spot for an afternoon picnic with the family or an evening stroll with your significant other; the only thing you’ll have to watch out for are the “Hanumann langur,” a tongue-in-cheek term for monkeys.

Kaylana Lake is more than just a scenic place to take in the expanse of blue-green water; it’s also where most of Jodhpur gets their drinking water, given that the city is mostly built on desert. As one of the largest water reservoirs in Rajasthan, it’s no surprise that Kaylana Lake has now become a tourist destination, where families often make a pit stop for afternoon tea or lunch on their way in or out of the city. There’s always a cool breeze to greet your face, as you stand right at the water’s edge.

Hindu devotees worship Chamunda Mata with special fervency during Dussehra celebrations, as she is the adopted goddess of the Maharajas of Jodhpur. Her idol was installed inside the Mehrangarh Fort in the 1400s, turning a portion of the fort into the Chamunda Mata Temple. The gorgeous, intricately carved walls are topped with milky-white dome-shaped cupolas, and the peachy-pink sunset sky provides the perfect backdrop with which to take it all in. Come for the spiritual experience as much as for the breathtaking views of Jodhpur.