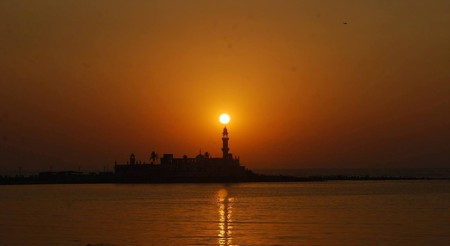 The Haji Ali Dargah is a reminder of the multi-cultural roots of Mumbai. It is open to all people irrespective of their faith. It has been braving the seas for over six centuries now and is a beacon of hope for the faithful. Amongst the patron saints of the city, Sayyed Peer Haji Ali Shah has immortalized himself in the city’s sea and its rocks. 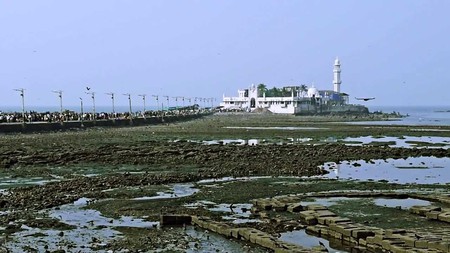 Over the centuries, Mumbai the city has seen various regimes controlling the seven islands. Almost all major dynasties controlled the islands at some point in time. Eventually, after the Rashtrakutas and the Shilaharas, the islands came under the influence of the expanding Delhi Sultanate, but under the guise of its Gujarat governors called the Muzzafarid dynasty. Taking advantage of the weakened central rule owing to Timur’s sacking of Delhi in 1398, the Muzaffarids established themselves as independent sultans of Gujarat. The Sultanate extended from present day Gujarat up to the northern Konkan region, having established Ahmedabad as the prosperous capital city. The evolving Indo-Islamic architecture found patronage under the Sultans, and like many beautiful monuments across Gujarat, they gave the Mumbai shore its iconic dargah: The Haji Ali Dargah.

The story of the dargah is the story of a pious man who gave up his worldly possessions. Hailing from Bukhara in present-day Uzbekistan, Sayyed Peer Haji Ali Shah Bukhari was a wealthy merchant. Through Ilm (Wisdom of Faith), many miracles and acts of faith were known to be performed by him. In the initial days of the spread of Islam in India, it was travelers and Sufi saints like him who settled amongst the local people and disseminated the message of Islam. When the Sultanate ruled over the island of Worli, at some point Peer Haji Ali came to settle there. Many legends point out that during his journey to Mecca, he fell ill and died, and on his request, his followers cast his body into the sea. Earlier in his life, the Peer had helped a poor woman recover some oil by jabbing a finger into the earth. This act later filled him with remorse, so much that he did not want to injure the earth more. The casket carrying his coffin floated back to the shores near Worli. Today, a humble yet eye-catching tomb stands at this spot amongst the rocks, some 500 meters into the sea. 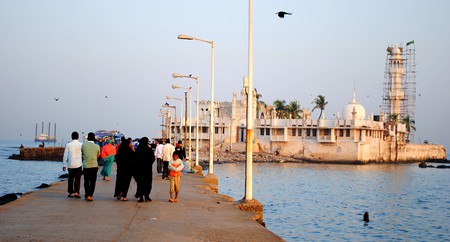 The first constructions on the site date back to 1431 AD. This was when Mumbai was still an archipelago, with disparate islands separated by the turbulent sea. The arrival of the Portuguese in 1509 and their advance into the natural harbor they called Bom Bahia (good bay) began to change the face of Mumbai. The British acquired the islands as a dowry from the Portuguese in the marriage treaty of Charles II of England and Catherine of Portugal in 1661 AD.

One of the major projects undertaken by the British to connect the islands, the Hornby Vellard formed a scenic bay around the Haji Ali. The causeway was completed in 1784 AD. 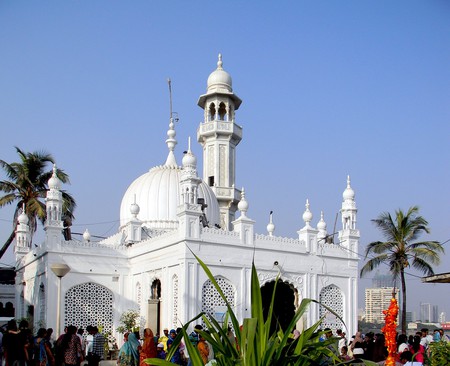 Today, Haji Ali Dargah is only accessible via a narrow road that disappears underwater at high tide. The road leads to a carved gateway with a marble façade. The main hall is richly carved with patterns and emblems, keeping the rich Islamic tradition of artistry alive. The ceiling is embedded with intricate pieces of glass with the 99 names of Allah. The main hall holds the tomb of Peer Haji Ali Shah Bukhari. Built in marble and capped with a silver tomb, the tomb is covered with zari cloth and brocade sheets decorated with verses from the Quran.

The Sufi tradition rings in the surroundings with Qawwalis being performed regularly in the Qawwal Khana, an adjacent open foyer. An eye-catching 85-foot minaret harks us back to the glory days of Indo-Islamic architecture. This minaret and the bulbous cupola of the dargah in the Worli Bay is one of the most famed views of Mumbai. 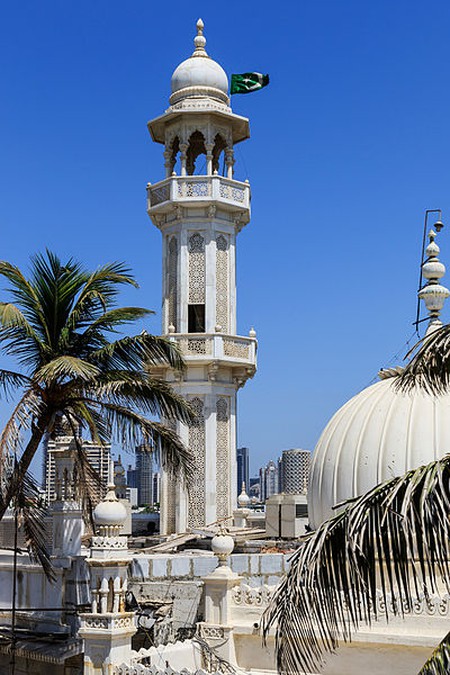 The Haji Ali junction is a major traffic crossover as one heads to South Mumbai from Worli to Kemps Corner, Breach Candy, Malabar Hill and the Mahalakshmi temple. The famously infamous Heera Panna market also stands at this junction. The popular Haji Ali Juice Centre provides respite from Mumbai’s heat. The Haji Ali trust itself runs a sanatorium and several charitable endeavors for the poor, carrying forward the Peer’s work.