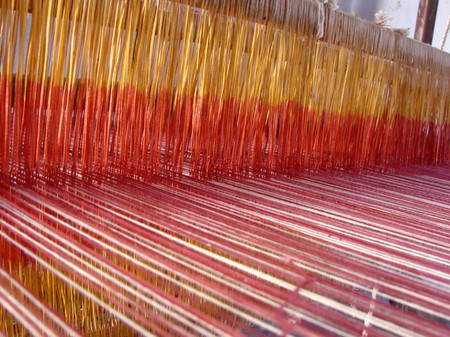 Khadi – the word conjures up images of Mahatma Gandhi and the Swadeshi movement he led. For a long time khadi was associated with the country’s freedom struggle and politics. Here we take a look at its history, exploring the story and significance of this textile.

Khadi is a term used for fabrics that are hand-spun and handwoven, usually from cotton fiber. However, contrary to popular belief, khadi is also manufactured from silk and wool, known as khadi silk or woolen khadi respectively. The fabric is known for its rugged texture, comfortable feel and ability to keep people warm in winter while keeping them cool during the summer. 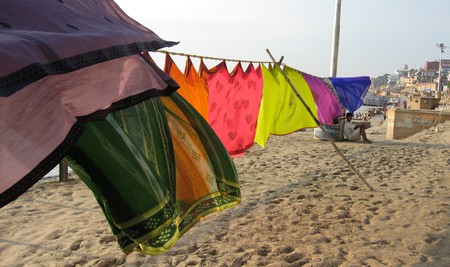 Indian textiles dry by the banks of the Ganges | © Volitare88 / Flickr

Broadly speaking, khadi is manufactured in two steps: converting the fiber into yarn using tools like spinning wheels (Charkha) and then weaving the yarn into fabric using looms. There are many steps like dyeing and strengthening of the fibers which can be explored in detail here. Both the spinning and weaving can be mechanized, resulting in hand-loom fabric when the first step is mechanized and mill-made fabric when both steps are mechanized. 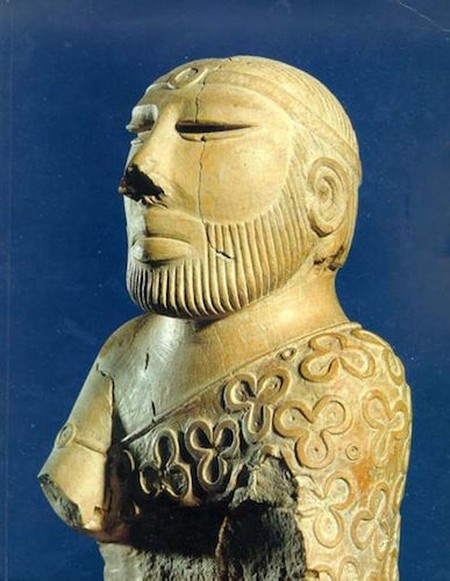 Hand spinning and hand weaving have been around for thousands of years, thus, making the craft of khadi ancient. The Indus civilization, around 2800 B.C., had a well-developed tradition of textiles. Discovery of terracotta spindle whorls for spinning yarn, bone tools for weaving, terracotta beads with textile impressions and figurines wearing woven fabrics are evidence supporting such claims. The most prominent figurine is of the Mohenjodaro Priest King sculpture shown wearing a cloak over the shoulder with patterns still in use in modern Sindh, Gujarat and Rajasthan.

There have been various other mentions of the beauty and vividness of Indian fabric. Alexander the Great discovered printed and painted cotton during his invasion of India. He and his successors established trade routes which finally introduced cotton to Asia and eventually to Europe. Recovery of Indian fabrics in the old ruins of Cairo supports this theory. Cotton textiles were considered all the rage in Rome and were popular among the wealthy. 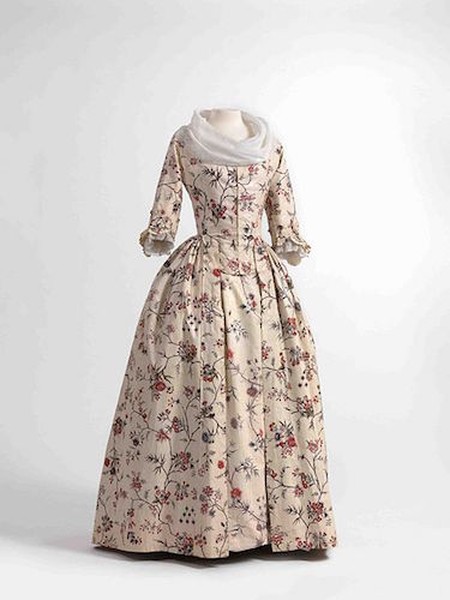 Over the years, Indian textiles became more refined with natural dyes and broader prints. Vasco Da Gama’s advent of the sea route to Calicut introduced calicos (named after Calicut, where they were made) and chintz (glazed calicos) to Europe. Initially used as household linens, they soon became commoner’s clothes due to their comfort, durability and low costs. By the end of the 17th century, the East India Company was importing a quarter of a million pieces into Britain. Dhaka’s famous muslin and Calicut’s calico and chintz held sway in European markets.

Stories about the fine translucent quality of muslin are commonplace. One of the best-known stories is that of Emperor Aurangzeb admonishing his daughter for wearing a transparent dress. Princess Zeb-un-Nisa replied, to the astonishment of Aurangzeb, that she was wearing seven layers of muslin.

Chintz threatened the local industry so much that a law was brought in both France in 1686 and in Britain in 1720 banning their use. This was during the golden era of khadi, and henceforth, khadi went into decline. Increase in production of low-cost mill fabric due to industrialization spurred demand for raw produce cotton rather than high-quality imports.

This was khadi’s dark moment. 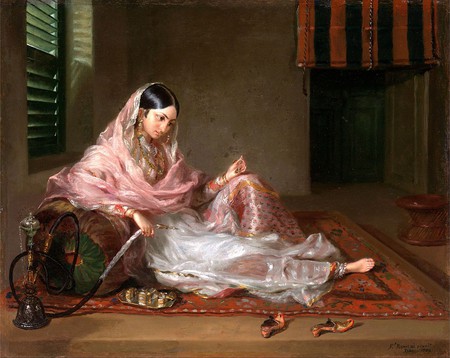 Khadi owes its revival to the Father of the Nation, Mahatma Gandhi. He was the one who saw its potential as a tool to being self-reliant, independent and bringing villages back to life. In his words:

‘The spinning wheel represents to me the hope of the masses. The masses lost their freedom, such as it was, with the loss of the Charkha. The Charkha supplemented the agriculture of the villagers and gave it dignity.’

However, he soon understood that more than the production and sale of this handwoven fabric, it’s the acceptance of the very fabric in our own daily lives that will bring the change. Gandhi made the Swadeshi Movement synonymous with khadi. He promoted its simplicity as a social equalizer and made it the nation’s fabric.

‘If we have the ‘khadi spirit’ in us, we would surround ourselves with simplicity in every walk of life. The ‘khadi spirit’ means illimitable patience. For those who know anything about the production of khadi know how patiently the spinners and the weavers have to toil at their trade, and even so must we have patience while we are spinning ‘the thread of Swaraj.’

The ‘khadi spirit’ means fellow-feeling with every human being on earth. It means a complete renunciation of everything that is likely to harm our fellow creatures, and if we but cultivate that spirit amongst the millions of our countrymen, what a land this India of ours would be! And the more I move about the country and the more I see the things for myself, the richer, the stronger is my faith growing in the capacity of the spinning wheel.’ 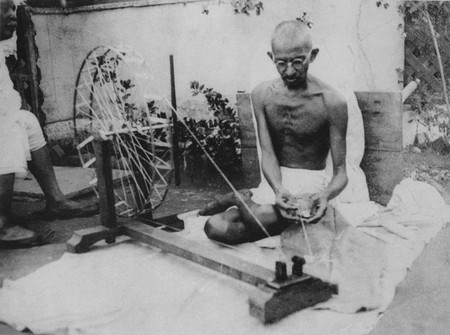 Introduced with the intention of boycotting foreign goods, khadi became a national movement under Gandhiji. All India Spinners Association was launched with the intention of propagation, production and the selling of khadi in 1925. Techniques were improved upon, and employment to the scale of two lakh was created. After independence, the movement continued, and the All India Khadi and Village Industries Board was created, which later culminated in the formation of Khadi, Village and Industries Commission. KVIC today is responsible for the planning, promotion, organization and implementation of programs for the development of khadi and other village industries in rural areas with the coordination of other agencies in rural development wherever necessary. 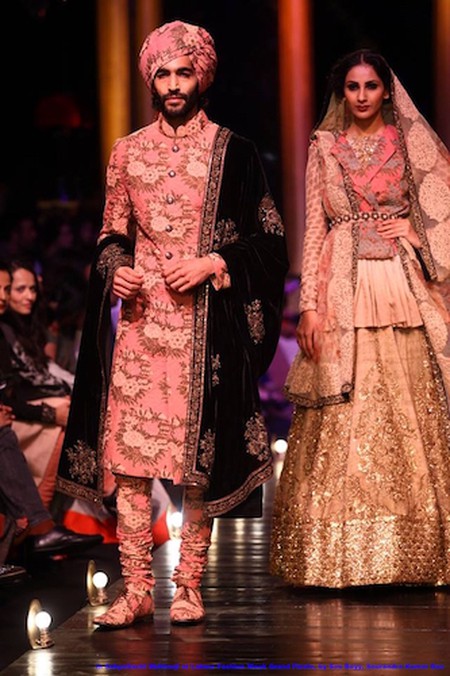 Since independence, the journey of khadi has been about maintaining a balance between traditions and modernity. Khadi stands for what’s traditional, but every tradition has to undergo change to stay relevant. Khadi has seen a new wave of acceptance thanks to many fashion designers like Sabyasachi Mukherjee, Ritu Kumar and Rohit Bal, to name a few. Brands like Fab India and Nature Alley have made their name with khadi products.

Even KVIC has decided to take a time leap, appointing Ritu Beri as their advisor, who wishes to change khadi’s image from boring to chic. Promoting khadi’s organic and zero carbon footprint nature, going the e-commerce route, and partnering with non-khadi players like Raymonds are but a few welcome steps in this direction. Creation of new designs and products like denim, trousers, and T-shirts suited for youngsters have created a vibrancy in the market.

India now celebrates Khadi Day on September 19th. So, are you khadi ready?

Fun Fact: Per the Indian Flag Code, laws that govern the usage of flags in India, khadi is the only material allowed to be used for the flag. If a flying flag is made with any other material, the offense is punishable by law with imprisonment up to three years plus a fine.