The Mystery of Delhi’s Iron Pillar, the Wishing Pillar That Refuses To Rust 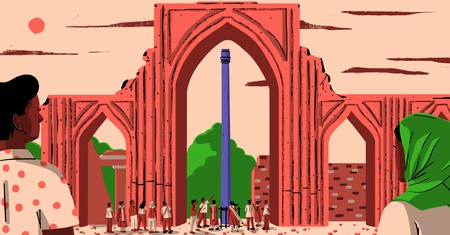 The Iron Pillar, housed in the same complex as one of Delhi’s most famous monuments, the Qutub Minar, dates back to AD 402 and has continued to capture the imagination of scientists since the early 1900s, owing to its resistance to rust.

He stood with his back firmly against the tall and tapering iron pillar, trying to hug it and willing his fingers to touch while another group of men and women looked on awaiting their turn. He almost made it – and then he didn’t, and a rising whoop from his friends quickly petered into a disappointed sigh. This scene has been the tradition around this somewhat nondescript iron pillar for years.

“I heard that if you can encircle the pillar with your hands, your wish will come true,” Vishal says, looking a bit disappointed that he could not complete the task. Tourist guides in the area will also tell visitors that if they can wrap their arms around the pillar and make their fingers touch, it is a sign of faithfulness to their lovers. “We came here to see the Qutub Minar. We didn’t know much about this pillar, so this was an interesting bonus,” Vishal adds. 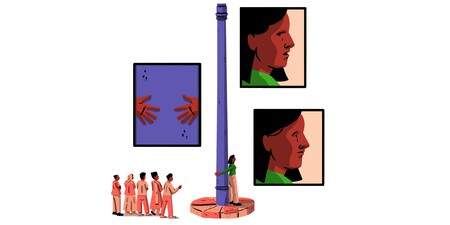 This six-tonne, seven-metre-tall (24-foot-tall) iron pillar might be an afterthought for visitors to the Qutub complex that also houses the Qutub Minar – which is among Delhi’s must-see monuments – but it has been a historical enigma for Indian and international scientific minds since 1912.

Positioned right in the middle of the courtyard of the Quwwat-ul-Islam Mosque, the pillar is nothing out of the ordinary; the tapering black column could be just another piece of architecture from ancient India. There is a deep socket on the decorative top of the pillar, where a statue of Lord Garuda, or the ‘Sun Bird’, might have been embedded – according to the Delhi Tourism website – a feature common to many such pillars of the time. However, when you look close, you can perhaps see it for the miracle it is – not just in its fabled wish-granting capabilities but its extraordinary feat of resisting corrosion for over 1,600 years in the face of the extreme temperatures and rising pollution in the Indian capital.

Some theories state that the reason for this resistance stems from the fact that the Iron Pillar has a high content of phosphorus and absolutely no presence of sulphur or magnesium. Delhi Tourism explains the possible reason why this pillar has not rusted even after a thousand years: “Environmental effects also reveal that the pillar was made to withstand a relative humidity of about 70 percent, which is appropriate as the climate in Delhi, despite experiencing four seasons in a year, does not ever exceed that limit.”

The pillar – made of 98 percent wrought iron – was included among the Out-of-Place Artefacts (OOPArts) – a term applied to prehistoric objects from around the world that show technological advancement beyond the time when they were built. And after years of many theories, including a belief that it might have been constructed with some futuristic or non-earthly metal, in 2003, experts at the Indian Institute of Technology cracked the mystery of the pillar’s resistance to rust.

Metallurgists at Kanpur IIT attributed the pillar’s resistance to rust to a thin layer of misawite, a compound of iron, oxygen and hydrogen. In a report published in the journal Current Science, R Balasubramanian, co-author of the study, said the pillar is “a living testimony to the skill of metallurgists of ancient India”. 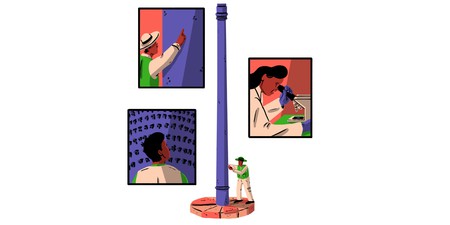 However, the identity of King Chandra remains a mystery, although he is generally identified as the Gupta emperor Chandragupta II. There is also much confusion around the origins of the pillar – some say it’s from the central Indian state of Madhya Pradesh – or who moved it to Delhi. Delhi Tourism believes the pillar was built by Chandragupta II, who ruled between 375 BC and 415 BC. According to its website, it was established in the front courtyard, facing a Vishnu temple on top of a small hillock called Vishnupada, at Udayagiri in Madhya Pradesh, and was later moved by Sultan Iltutmish in 1233 from its original location to the Qutub complex in South Delhi.

“There is an interesting legend connecting the name ‘Dilli’ [local pronunciation of the city], or ‘Delhi’, with a Tomara king and the famous Iron Pillar. Local legend has it that the Iron Pillar was designed to be the standard of Vishnu and meant to be implanted into the hood of the celestial serpent on which the earth rests. At the same time, a curse was pronounced on anyone who tampered with it. The Tomara prince, who had the pillar installed in Delhi, wanted to make sure that it had been planted deep enough to enter the hood and had it dug up,” says Tanvi Bikhchandani, who used to lead walks with the group Delhi Heritage Walks.

“The base was found smeared with the serpent’s blood. The curse took its course, and the Tomara Dynasty declined. The event was recorded in a verse: ‘Kelee to dheelee bhaee, Tomara bhava mat heen’ or ‘the pillar was loosened, and the Tomar lost his head.’ Thus some people argue that ‘Dilli’ is a pun on the word ‘dheele’, meaning ‘loose’.”

The Iron Pillar of Delhi is a masterpiece, an archaeological marvel, but also a melting point of the past and the present, history and science, and imagination and urban legends.