The Most Impressive Architectural Landmarks in Chennai 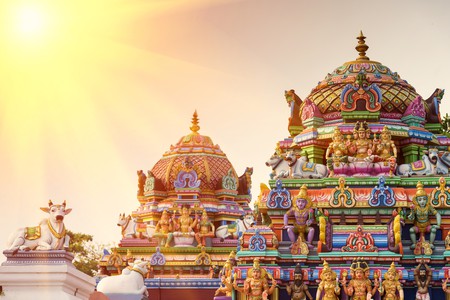 The fascinating history of Chennai through four centuries of existence is only matched by the grandeur of its great architectural landmarks. While the British-era landmarks, mostly constructed in Indo-Saracenic and Art-Deco styles, dominate the city’s landscape and feature prominently on the list of heritage buildings, the city is also home to several temples and complexes that predate the colonial age by centuries. Here are some of the best architectural landmarks that every Chennaiite can be unreservedly proud of. 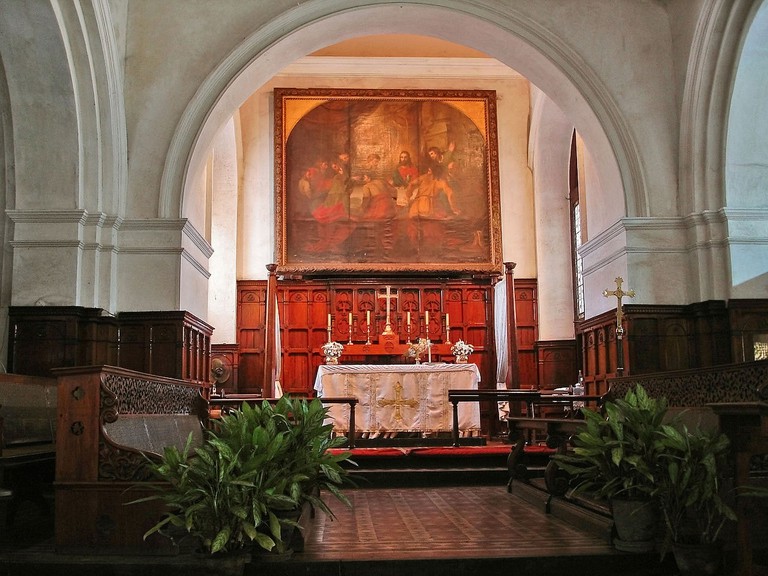 St. Mary's Church, located inside Fort St. George, is the oldest Anglican Church in India | © PlaneMad / WikiCommons
One cannot talk about British-era architecture in Chennai without first mentioning the landmark that marked the birth of modern Chennai as we know it. The story of Fort St. George starts in 1644 when the British felt it necessary to protect their trade interests with fortifications. It was constructed at a cost of £3,000 to include 20ft-high walls, a garrison (still in working order), a bank office (that now houses the Fort Museum), and the famous St. Mary’s Church, which is the oldest Anglican church in India. One of the finest examples of British architecture in the city, the fort still houses the main administrative office of the Tamil Nadu government and serves as its state legislative assembly.
Open In Google Maps
Rajaji Salai, Fort Saint George Chennai, 600009, India
Visit Website
Give us feedback

Ripon Building is the current headquarters of the Corporation of Chennai | ©Planemad/WikiCommons
This majestic all-white structure was completed in 1913 to house the Corporation of Chennai (then Madras), which is the second oldest existing corporation in the British Commonwealth. One of the finest examples of the Neoclassical style of architecture, the Ripon Building features exquisite detailing and décor, along with a Westminster Quarters Chime Clock located in the central building. The building has undergone major renovations and maintenance in recent years to preserve its original splendour.
Open In Google Maps
Ripon Building Raja Muthiah Road, Kannappar Thidal, Poongavanapuram Chennai, Tamil Nadu, 600003, India
Give us feedback

Building
Facebook
Email
Twitter
Pinterest
Copy link
Share
Map View
Popularly considered to be the first building ever constructed in the Indo-Saracenic style of architecture, Chepauk Palace was first completed in 1768 by British Architect Paul Benfield under commission from the Nawab of Arcot. Featuring a confluence of British, Indian and Mughal sensibilities, Chepauk Palace served as an inspiration for several later works by renowned architects in Chennai. However, since the late noughties, the palace, which covers a sprawling 117 acres, has faced several structural problems and roof collapses and was gutted by a fire in 2012 that destroyed the famous Khalsa Mahal. After long delays, the renovation of the Khalsa Mahal was only completed in 2017, with restoration work currently being carried out in Humayun Mahal.
Open In Google Maps
Kamarajar Promenade, PWD Estate, Chepauk, Triplicane Chennai, Tamil Nadu, 600005, India
Visit Website
Give us feedback 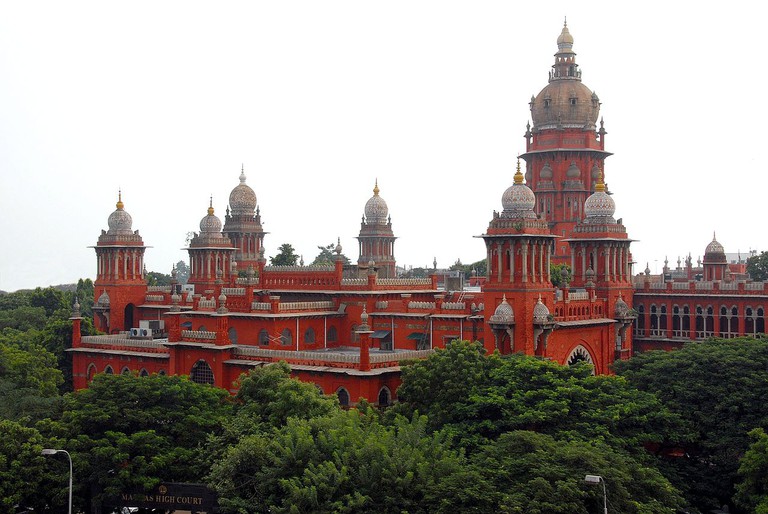 The Madras High Court Complex is one of the best examples of the Indo-Saracenic style of architecture | ©Yoga Balaji/WikiCommons
The Madras High Court complex, which is another prime example of the Indo-Saracenic style of architecture in India, was constructed in 1892 and designed by British architect JW Brassington (and later by the famed architect Henry Irwin). The complex houses several buildings that feature fine, intricate designs and terracotta detailing, along with beautifully constructed domes. The interior of the building is a testament to the skill of local and British artisans and features stained glass doors and painted ceilings. It also contains the original lighthouse of the Madras Port within its walls. The building has continuously housed the Madras High Court since its inception and continues to do so to this day. A visit to this complex is a must for anyone with an interest in Chennai’s architecture.
Open In Google Maps
High Court Road, Parry's Corner, George Town Chennai, Tamil Nadu, 600108, India
+914425301000
Visit Website
Give us feedback

Temples were one of the chief forms of architectural expression in pre-colonial Tamil culture and formed a cultural mesh around which various communities congregated. Two prime examples of Tamil architecture in Chennai are the Parthasarathy Temple in Triplicane, which dates back to 8th century, and the Mylapore Kapaleeswarar Temple believed to be constructed in the 16th century. Apart from the majestic gopurams (ornate towers) with stucco figures adorning it, the temples also feature adjoining ponds and agraharams, the Brahmin living quarters, all of which are some of the prime characteristics of ancient Tamil architecture. The two temples are steeped in history and legend and are still thriving centres of Hindu culture in South India. 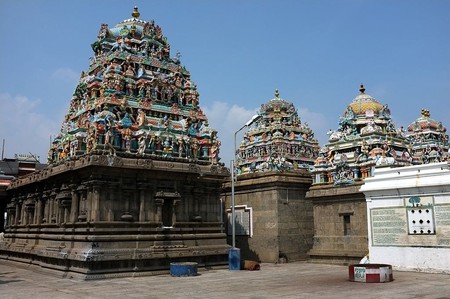 Parry’s Corner was a central business district of the city of Madras in the early 20th century and features some of the best examples of the Art Deco style of architecture in the city. Among the several Art Deco buildings lining the area, prominent ones include Dare House, constructed in 1940, which has remained a prime cultural identifier of Chennai’s architecture. A walk along Esplanade and Poonamallee High Road reveals several buildings and bungalows constructed in Art Deco style, including the United India Building and Chennai House (formerly Burma Shell Building). 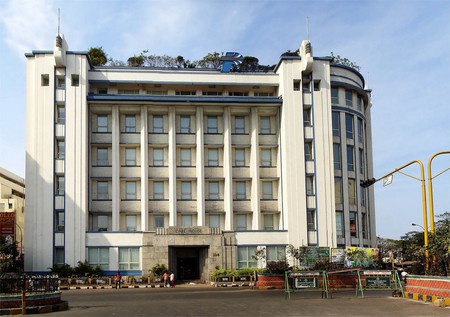 Dare House in Parry’s Corner, Chennai, is one of the finest examples of Art Deco architecture | © Plane Mad/WikiCommons

Building
Facebook
Email
Twitter
Pinterest
Copy link
Share
Map View
The LIC Building on Mount Road is almost synonymous with post-independence architecture in Chennai. Constructed in 1959 to house the office of the Life Insurance Corporation of India, it was the first skyscraper in Chennai and also the tallest building in India when it was completed. Standing at 177ft tall, the blue facade of the LIC Building has been symbolic of Chennai’s modern identity and marked an architectural transition from lime-and-brick construction to concrete columns. It remained the tallest building in Chennai untiil the 1990s, and is still one of the city’s finest landmarks.
Open In Google Maps
LIC Building, 97 Anna Salai, Anna Salai, Triplicane Chennai, Tamil Nadu, 600002, India
Give us feedback

Opened in 2012, the ITC Grand Chola hotel is one of the finest examples of modern architecture in the city and is an enduring tribute to ancient Tamil architecture. One of the largest hotels anywhere in India, the Grand Chola features a style of architecture that mimics the great Chola temples of old, and features exquisite stonework by over 4,000 local artisans from Mahabalipuram. The complex, spread over 150,900 square metres, features four entrances styled after Chola temples and is reinforced by 462 pillars, many of which feature intricate hand-carved designs. Constructed to be one of the greenest buildings in India, the hotel is also one of the few buildings in Chennai run completely on renewable energy. 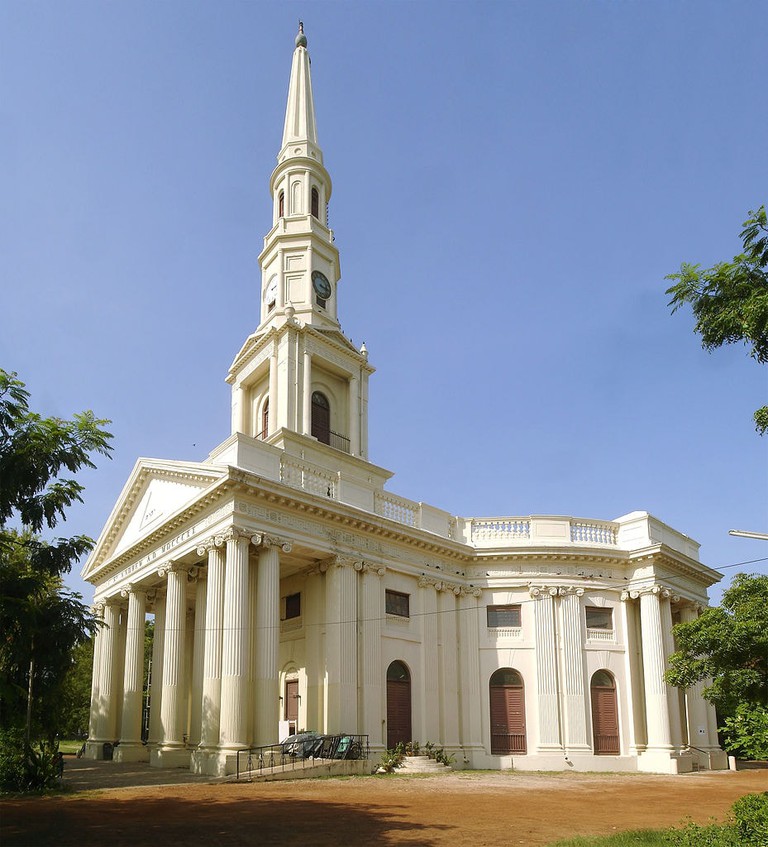 St. Andrew's Church (The Kirk) is one of the oldest British-era buildings in Chennai | © PlaneMad / WikiCommons
One of the most expensive constructions undertaken during the Raj, St. Andrew’s Church in Egmore was constructed and consecrated in the year 1821, making it one of Chennai’s oldest heritage buildings. The church was constructed with features of Neo-Classical and Palladian styles of architecture and has a circular main complex. One of the primary architectural highlights is the shallow dome that sits upon the circular hall. The exquisitely decorated dome features pottery cones and is painted with a gold colour scheme. The deep-blue shade of the dome is derived from a mixture of crushed seashells and the semi-precious stone lapis lazuli that fills its interior.
Open In Google Maps
#37 Poonamallee High Road, Egmore Chennai, Tamil Nadu, 600008, India
+914425612608
Visit Website
Give us feedback