The Magical World Of Ruskin Bond

Ruskin Bond, India’s most prolific and perhaps most loved author, has been writing about the world as he sees it for more than half a century: a world of quaint people, dense forests, hills and valleys, trains and tunnels, mystics and ghosts. Here, the Culture Trip traces Bond and his vision.

Ruskin Bond’s own story is no less intriguing. He was born in a military hospital in Kasauli, Himachal Pradesh, in 1934. His mother separated from his father when Ruskin was just seven years old, and he spent most of his time growing up in Jamnagar, Gujarat, and Shimla, Himachal Pradesh. While studying at Bishop Cotton School in Shimla, the rigor of an all-boys convent was punctuated by visits from his father, who took him to the cinema in rickety hand-pulled rickshaws, telling him stories of ghosts and spirits by Rudyard Kipling. 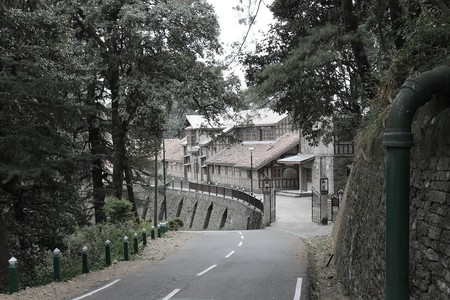 Young Ruskin also made periodic trips to his grandmother’s house in Dehradun, Uttarakhand, and recollections of these journeys informed many of his most memorable short stories. 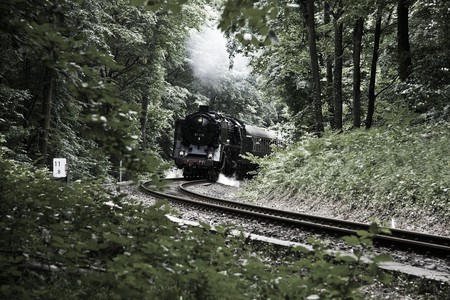 The allure of trains | © pixabay.com

His descriptions of Indian Railways is unique. As he traversed the plains of Yamuna and Ganga — and occasional Terai forests — Bond encountered remote railway stations, quaint people, lonely tunnels, and even lonelier tunnel watchmen. Many of these would feature in short stories like ‘The Woman on Platform 8,’ ‘The Night Train at Deoli,’ ‘Time Stops at Shamli,’ ‘The Tiger in the Tunnel,’ and ‘The Eyes Have It All,’ among others.

Ruskin Bond loves Dehra. His first novel, The Room on the Roof, published in 1956, was written in London on his maiden voyage to England. Moved by the loneliness of this alien city, he dug into his memories of Dehra. The novella is semi-autobiographical in nature, describing the protagonist Rusty’s angst during adolescent years against the backdrop of friendship, Dehradun. It is such a personal account that even most loyal readers know not where Rusty ends and Ruskin begins.

Located in a doon (low-lying valley), Dehra is the last stop at the foot of Siwaliks, the first range of the mighty Himalayas. Ruskin Bond has seen it since it was a small, sleepy army town, where many Anglo-Indians resided in stately bungalows, along wide avenues from Clock Tower to Rajpur Road. Rusty grew up in one of these bungalows, a household with an exotic collection of animals ranging from a pet python to a tiger cub found on a hunting expedition. Readers learn of the sweet taste of litchis, the wide fields, and canals carrying fresh water from the hills.

The Dehra that Rusty speaks of is long lost now. The Parade grounds where Rusty spent nights as a rebellious teenager are now a park. The Clock Tower, its wise beggar long gone, is now a traffic magnet.

The Rajpur Road of Dehra goes winding up the hills to Mussoorie, Uttarakhand. This heady town is located at the centre of a number of high villages such as Lansdowne and Barlowgunj. Landour, where Ruskin Bond now lives, is the highest place in this area, its Lal Tibba rising up to 7464 ft. 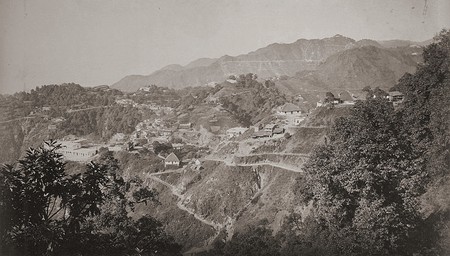 The landscape here is very different from Dehra. The vegetation is different. To put it in his own words,

At elevations of 4,000 feet, the long-leaved pine appears. From 5,000 feet there are several kinds of evergreen oak, and above 6,000 feet you find rhododendron, deodar, maple, the hill cypress, and the beautiful horse-chestnut. Still higher up, the silver fir is common; but at 12,000 feet the firs become stunted and dwarfed, and the birch and juniper replace them. At this height raspberries grow wild, amongst yellow colt’s-foot dandelion, blue gentian, purple columbine, anemone and edelweiss.
(Ganga Descends, 27) 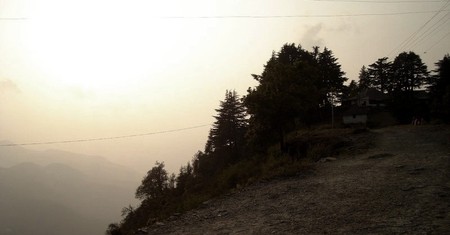 His stories set higher up speak of simple people, of small villages where life moves at its own sweet pace. The Cherry Tree, set in Mussoorie, tries to tackle the passage of time and themes of growing up and the general way of life in Mussoorie. The Blue Umbrella deals with a subject as simple as the greedy pursuit of an umbrella by a shopkeeper in a sleepy hamlet in the Garhwal Hills.

Bond’s travels have taken him to Gangotri, along the river valleys of the raging Alaknanda, and the gentler Mandakini, but it is the Bhāgīrathī that remains his favorite river of the Garhwal region. 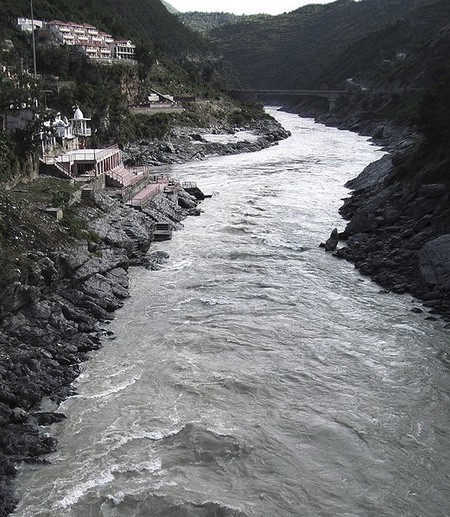 The Bhāgīrathī seems to have everything — a gentle disposition, deep glens and forests, the ultra vision of an open valley graced with tiers of cultivation leading up by degrees to the peaks and glaciers as its head.
(Ganga Descends, 62)

Alaknanda and Mandakini join at Rudraprayag, and the stream assumes the name ‘Ganga’ after the confluence with Bhāgīrathī at Devprayag. 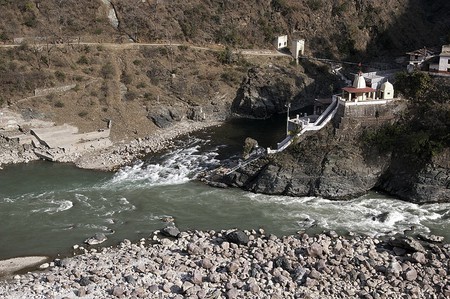 The Ganga crosses Rishikesh and later Haridwar, where it enters the vast plains of northern India. Much like his stories, Ruskin Bond finds this as the returning point for Rusty in the sequel novella, Vagrants in the Valley. 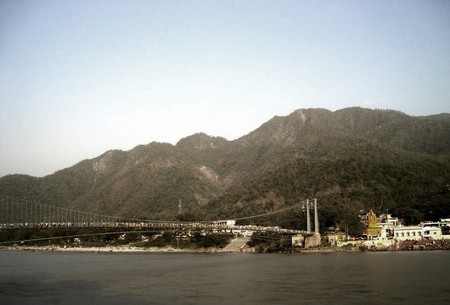 For ghost stories, Bond looks to the traces that the British Raj left behind: of wronged servants, of lonely wives, of the now-rare Dak bungalows and of unmarked graves; of ghouls, witches, and chudails, men that turned into animals and animals that turned into men. These stories are hidden in bylanes of such quaint villages hidden by pines and myths propagated by discussions at the local lodge. 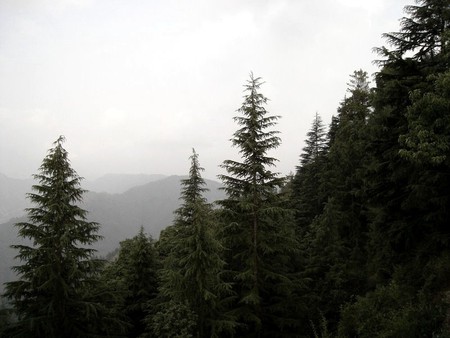 2016 marks six decades since The Room on the Roof was published, and it has been a long journey for Ruskin Bond, a writer who stays in and writes about an idyllic India, much away from the lights of the city. He has forged a beautiful relationship with mountains and the people of the mountains, and his readers all love him for that.

. . . the smell of fallen pine needles, cow-dung smoke, spring rain, bruised grass. The pure water of mountain streams, the depth and blueness of the sky-enchanted things that are common to mountains almost everywhere.
(Notes From The Small Room, 115) 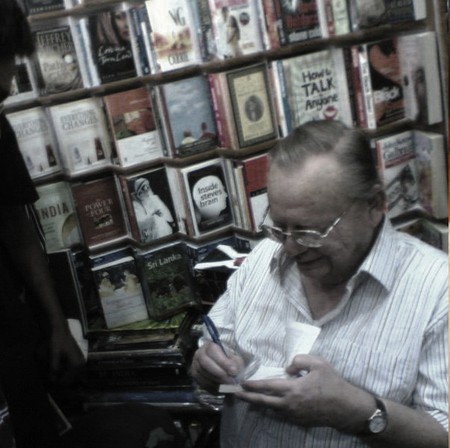 Rusty stays at Ivy Cottage, Landour, with his adopted family. He signs books every Saturday at Cambridge Book Shop in Mussoorie.