The Legend Of The Mysterious Village Of Malana 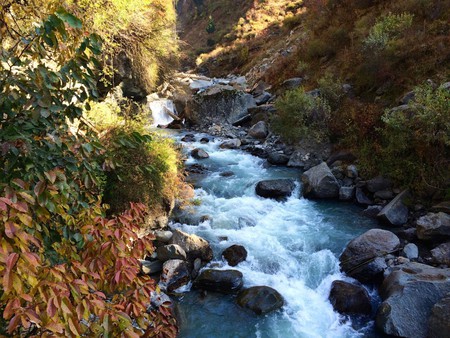 Bhuntar is the place where the confluence of the Beas and Parvati River is seen, just beneath the bridge from where the road to Parvati Valley bifurcates from the highway. The air is fresh and carries a distinct fresh aroma of nature. It is a narrow road, and the bus sways from side to side ensuring some scary yet unforgettable moments for the traveler. The bus first arrives in the nondescript town of Jari, and Malana is still quite a long way away. 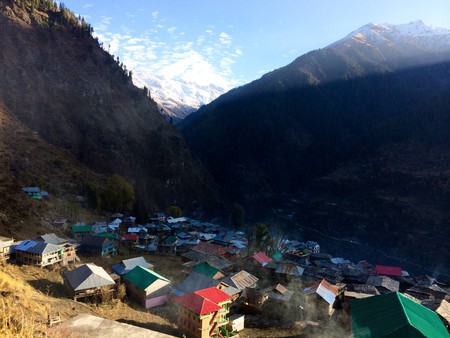 Very few vehicles ply on the recently built road to Malana. Earlier, a difficult trek meant five hours were required to reach Malana; it is only a two-hour trek now. There are basic dhabas to have food in Jari. There is a bus to Malana that leaves from Jari at 4:30 in the afternoon. After that, it is two hours of walking from the last road head to finally reach ‘The mysterious village of Malana.’

Work on a power project on the roaring Malana River has resulted in a road being built to the village famously known as the oldest democracy in the world. Lonely Planet has described vacations in Parvati Valley as deadly – lending it a notorious feel.

The bus climbs precariously on steep turns and is maneuvered with skillful deftness. The road ends abruptly, and then the two-hour trek begins. The trail first descends to a bridge for travelers to cross the roaring waters of the Malana River. 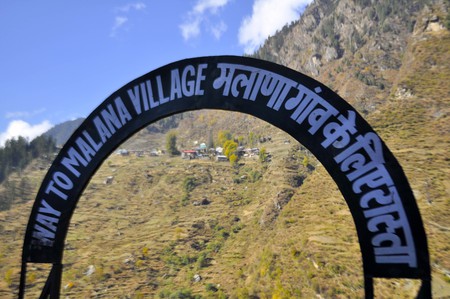 The start of the three hour trek to Malana

The climb is uphill and can become arduous for city people. According to the locals of Malana, all outsiders are untouchables in the land of the pure. Fittingly, the guest houses are all located on top of the village. They don’t want outsiders meddling in their daily affairs.

The nights are pretty cold at the altitude of 3,000 meters where Malana is located. There are basic guesthouses where rooms, with bare minimum necessities, are available for 200 Rupees. Every guesthouse also has a closed room with psychedelic paintings and neon lights, a room resembling a smoking den.

‘Boom,’ visitors to Malana utter before lighting up and gently touching the chillum on their forehead as a mark of reverence to Lord Shiva. Enormous amounts of charas, known as Malana Ice and Malana Cream, are smoked by the many foreign visitors that come to Malana. A happy sounding genre of trance plays. 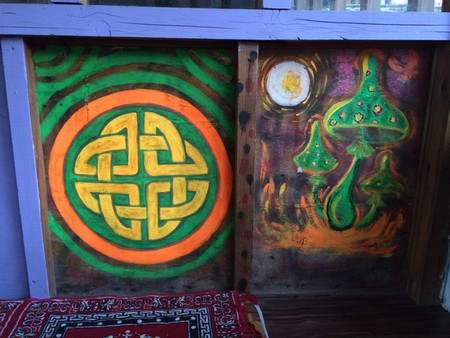 It is widely known that Malana charas is some of the best in the world and is highly prized the world over, even in the legal weed capital of the world, Amsterdam. Malana Cream’s high oil content commands a big price in the market.

Snowy mountains in the far distance overlook this ancient village. In a freak accident in 2008, a fire had broken out, with a majority of houses in Malana burnt, and the old style of architecture was destroyed.

The whole village lazes around the open courtyard in front of Temple Jamlu (the deity of Malana). A board hangs with the words ‘Do not touch’ among the horns of wild animals. Locals do not touch outsiders and are asked to keep the money on the floor for the shopkeeper to collect upon buying anything. The Malanis consider all non-Malanis to be inferior and, therefore, untouchable. 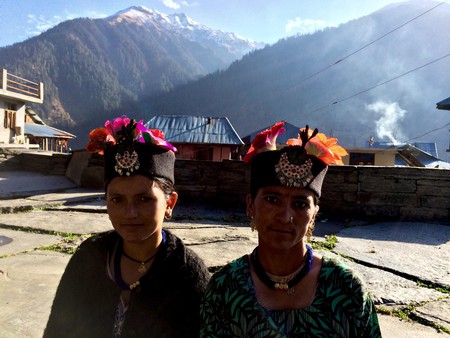 The locals claim Malana to be the oldest democracy in the world, and they didn’t recognize the Constitution of India until very recently. They have their own laws, and the village constitution solves all disputes in their unique and mysterious ways. Nowadays, they have a mobile network, and kids are increasingly being sent to the government school to study.

The green eyes and sharp features of the locals lay claim to being descendants of the Aryan army of ‘Alexander The Great’ of Greek fame. During the 4th century BC, some soldiers, while returning to their homeland, liked Malana so much that they decided to settle down here. This is also supported by the local folklore of some old wooden houses having soldiers carved on them.

Another legend narrated by an elder villager says that Emperor Akbar’s tax gatherers charged tax from a man in Delhi who had been given the gold piece from Jamlu’s treasury in Malana. Akbar was immediately struck with leprosy; he sent his men with the piece of gold and many images presented in gold and silver. Jamlu Devta was pleased, and Akbar was cured. Akbar never collected any tax from the village of Malana after that. Every year, this incident is enacted at Malana in the Festival of Fagli, and the images are brought out from inside Jamlu Devta’s temple.

The Malanese speak a language that has no script. Hardly 1,000 odd people understand the language of Kanashi, which supposedly has Tibetan roots.

The village is enigmatic; everyone smokes cannabis openly, and it grows everywhere in wild abandon. Little kids try to sell it to outsiders. Women wander around the village with herds of goat and sheep and practice a predominantly rural lifestyle in Malana. 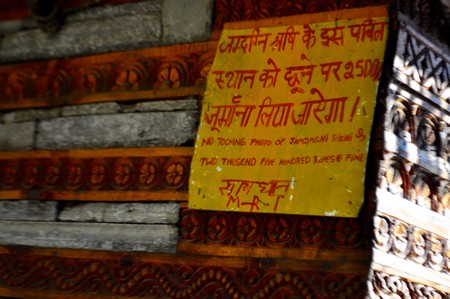 Outsiders are not supposed to touch anything in Malana

For people interested in knowing more about Malana, these two documentaries are highly recommended: Malana: Globalization of a Himalayan Village and Malana: A Lost Identity.

The recent developments of The Malana Hydro Power Plant have brought development to the region but also a loss of culture. Maybe it is a ploy to keep the name going and to bring the riches of the cannabis cultivation to themselves.

The world will never know.