The Largest Kitchen in Delhi That Never Closes 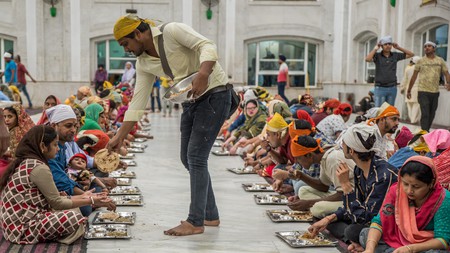 A community-operated free kitchen, housed within the Gurudwara Bangla Sahib – a historic Sikh house of worship in central Delhi – runs 24/7, 365 days a year and feeds over 35,000 people every day.

It’s a November afternoon in the heart of India’s capital. The winter sun is strong but pleasant. The Gurudwara Bangla Sahib – a tourist hotspot – is teeming with visitors. Housed on the same grounds, just behind the magnificent, golden-domed Gurudwara with its signature tall flagpole, called a Nishan Sahib, is a sort of nondescript building with a grille gate. The gate leads into a long rectangular waiting area.

On one end of the waiting area, men and women chop and peel mounds of vegetables, clean uncooked grains and lentils, while sipping tea and keeping up a low murmur of conversation. On the other end of the hall, a group waits for the dining hall – which can accommodate between 800 and 900 people in one go – to reopen for another round of lunch. By the time the door opens again, the small group has swelled to a crowd of at least 300 people, who noisily pour into the dining hall. 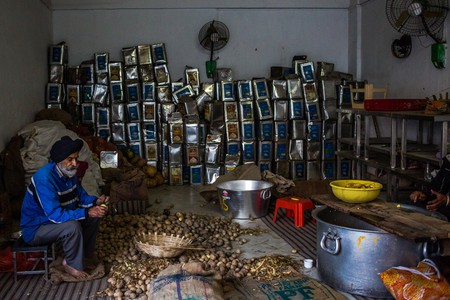 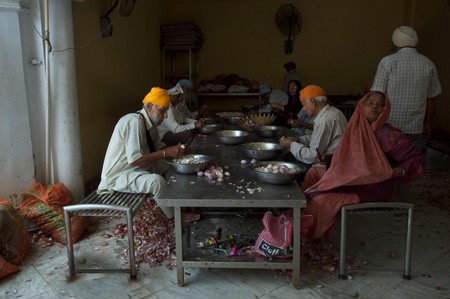 The diners, including tourists, local people and the homeless, sit down, with their heads covered, as servers dole out a fresh-off-the-stove vegetarian lunch on sectioned steel plates. Volunteer servers drop hot, soft chapattis, brushed with clarified butter, straight from the griddle onto plates, ladling out steaming black lentils and a mixed vegetable curry. Servings are unlimited – but with the condition that not a single morsel of food should be wasted. As the lunch progresses, the room throbs with the noise of chomping, sporadic conversation, the clank of spoons against plates and serving vessels and a steady strain of devotional music – occasionally cut off by announcements – floating in from the main shrine next door. 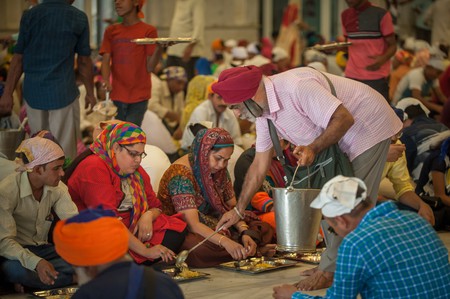 The dining hall of the Gurudwara hosts one of the largest langar (community meals) in Delhi. The Gurudwara Bangla Sahib kitchen feeds the hungry 24/7, 365 days a year. The food is cooked in an industrial-sized kitchen that works like clockwork and is a study in efficient management. The buzz of the dining hall barely reaches the kitchen, which is strangely serene considering at any given point in the day the cooks are preparing to serve thousands of people. 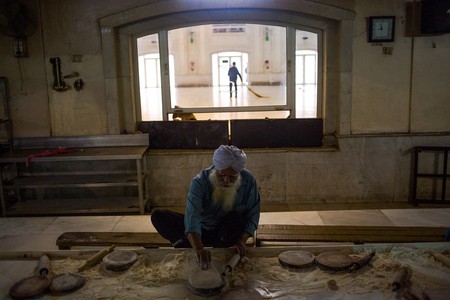 Volunteers perform many tasks, including making rotis to be served as part of a communal meal, and sweeping the hall where meals are served | | © REBECCA CONWAY / AFP via Getty Images

“The last festival we had, we had over 100,000 people… the door to the langar almost fell on us, there were so many people waiting to get in. We had to cook in two to three batches,” says Harbhej Singh, who runs the kitchen.

The kitchen starts serving food at 5am every day and continues to do so until late in the night. However, if someone comes to the kitchen for food beyond these hours, it is opened up and they are served. “No one is turned away, no one goes away hungry from here,” Singh says.

Community kitchens like these can be found across the world, attached to Sikh temples. Legend has it that Guru Nanak, who founded Sikhism in the late 15th century, used money that his father gave him to feed a group of hungry men. He bought them groceries and asked them to cook and eat together, forming the tradition of langar, or community meals.

The langar also allows Sikh people the privilege of sewa (serving other people), by helping out in the kitchen with the preparations, cooking and cleaning. However, given its popularity and daily footfall, much of the cleaning and cooking in the Gurudwara Bangla Sahib kitchen is automated. But they do have a separate corner with a hot griddle where Sikh families roll out and roast chapattis manually before sending them out into the dining hall. 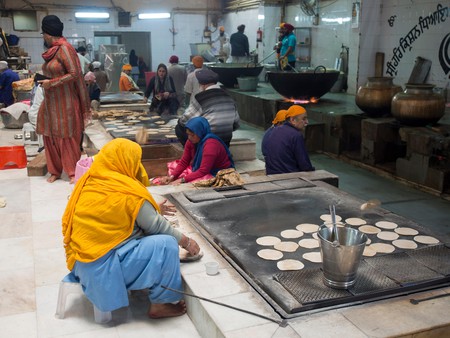 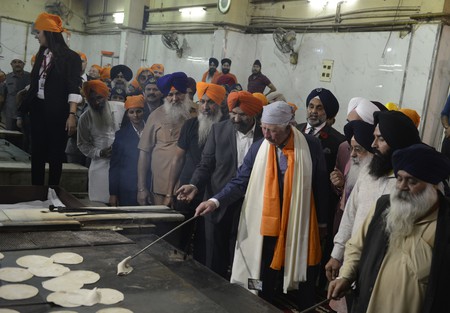 Recently, Britain’s Prince Charles, visited the Gurudwara Bangla Sahib kitchen and helped in making chapattis for langar. He was impressed by the scale of its operations, and rightly so. Inside the spotless kitchen, gigantic brass woks, or kadhais, stand along one side, with a capacity to cook 12 quintal curries each. On the other side of the room, there are rows of soup pots that can cook 34 quintals of daal or 3,200kg (7,050lb) of rajma (red kidney bean soup) or 1,600kg (3,500lb) of kadhi (yoghurt soup thickened with chickpea flour), 30 quintal of rice or 20 quintals of rice pudding.

At the back of the industrial-sized kitchen a chapatti-making machine is fed wheat flour by the cook’s helpers. It belches out dough, which then gets pressed and roasted and comes out the other side of the machine as puffy chapattis, which after a liberal brush of ghee is handed over to the servers. The machine churns out thousands of chapattis every day. 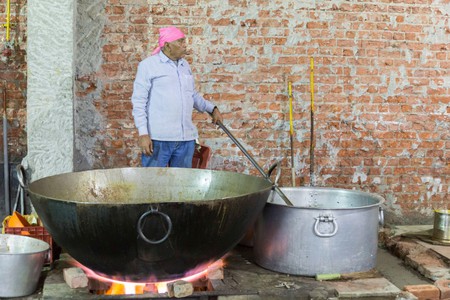 The state-of-the-art kitchen follows an assembly line system, which makes cooking and serving effortless. Kitchen workers have their designated duties. There are helpers whose only job is to collect the dough and feed it to the machine to be pressed out and roasted. There are others who only brush the roasted chapattis with clarified butter (ghee). Beyond the kitchen there are three storerooms, each stacked with groceries from floor to ceiling, and a cold storage for vegetables. There’s a langar office, and a room reserved for people who might need a quick meal before they head out to catch a flight or keep a medical appointment.

“It takes a bit of time for a meal in the dining hall as there are hundreds of people. So, this small room is for people who need a quick meal,” Singh says. 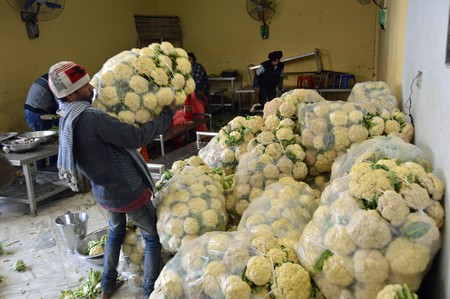 Singh stresses the fact that cooking in a langar is not an easy job. The cooks are trained rigorously for a year. They first serve as assistants to the cooks before they begin cooking the langar. “To cook in a langar, one must be clean, pure and hygienic, without any addictions,” says Singh, who also started out as a langdi.

“We cook in God’s name. You cook this food at home, use the same ingredients, but it will never taste the way it does here,” says chef Balbir Singh with a smile. “Sometimes people wait for over two hours to eat here.” 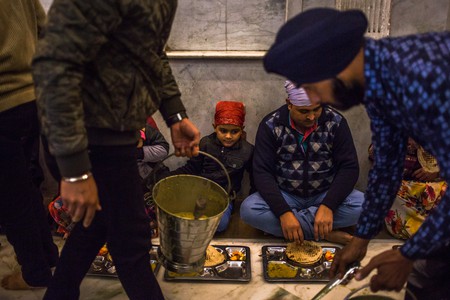 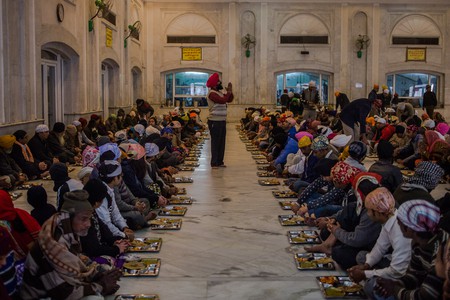 And why wouldn’t they? The Gurudwara Bangla Sahib kitchen cooks thousands of simple but wholesome meals every day without any fuss or rush. If its effortless efficiency is a study in organisation, its magnanimity of embracing everyone into its fold is a study in humanity.