Exploring The Holy City of Varanasi 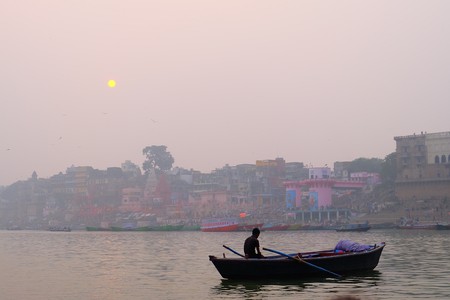 The Ganges River in Varanasi | © Lauren Marinigh/Twirl The Globe

Varanasi is one of the most vibrant and interesting places to visit in India. From women dressed in bright saris that line the Ganges for a sunrise bathing, to the cultural traditions passed on for centuries, Varanasi is an electrifying city — here’s what you need to know.

Varanasi is a city in Northern India also known as Benares or Kashi. The city is one of the oldest continuously inhabited cities in the world and is not only the spiritual capital of India, but also the holiest of seven sacred cities in Hinduism, and it played a significant role in the development of Buddhism.

Buddha is said to have founded Buddhism in Varanasi around 528 BC when he gave his first sermon at Sarnath, a nearby city located about 10km away. The city continued to grow in its religious significance and was under Muslim rule for three centuries from 1194, until a tolerant emperor restored some religious respite to Varanasi, which still remains a center of activity for Hindus.

For centuries, education, philosophy, culture, arts and religion have flourished here, and when you visit the religious center of Varanasi, you’ll see that this is what fuels the city and keeps it vibrant. 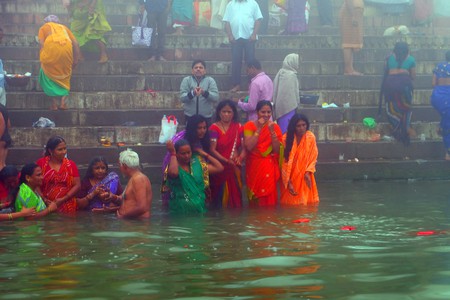 Bathing in the Ganges | © Lauren Marinigh/Twirl The Globe

A 2,525 kilometer river that flows through India and Bangladesh, the Ganges is the most sacred river to Hindus, and although it is ranked as one of the most polluted rivers of the world, it is still home to hundreds of species, and many locals that live along the river depend on it for everyday life. Once densely forested and home to animals like elephants, rhinos, lions, and tigers, over the years, the river and area surrounding has had to adapt to the ever-growing population, and now, large wild animals are few and far between.

The Ganges, much like the city of Varanasi, is said to be one of the holiest places in the world. People believe that bathing in the Ganges washes away sins and cleanses you of all evil, and when visiting, you’ll see hundreds of people every morning bathing along the river.

Cremations are also a tradition along the Ganges River, as Hindus believe cremation on the banks of the river frees the soul from the cycle of death and rebirth. Due to the population density and belief in this tradition, the famous cremation ghat in Varanasi operates 24 hours a day, seven days a week. 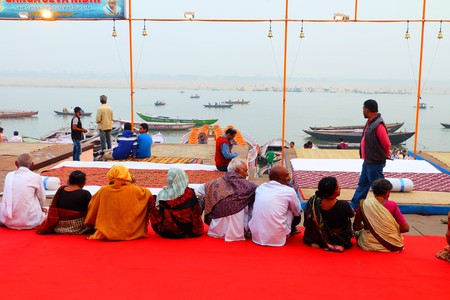 Lining up for the nightly aarti | © Lauren Marinigh/Twirl The Globe

Much of the daily life in Varanasi takes place on its 87+ ghats—stone steps that descent steeply towards the river and stretch northward into a crescent. Most of these ghats were built after 1700 AD and are associated with legends or mythologies, while others are privately owned.

As you take one of the popular boat rides along the shore, you’ll get a better view of all the ghats from the water. Assi Ghat is where the Ganges meets river Assi, and although it is not as popular for tourists and visitors, it is an important ghat for Hindus, as pilgrims bathe here before worshiping Lord Shiva.

Dashashwamedh Ghat is one of the oldest and important ghats and is where the famous Ganga Aarti ceremony takes place every evening. A great place for people watching, this ghat is constantly lined with beggars, sellers, pilgrims, and everything in between.

Manikarnika Ghat is the popular cremation ghat in Varanasi. Best seen at a respectful distance from a boat on the water, you’ll come face to face with death at this ghat, which will leave you with a strange feeling — one that almost makes you appreciate the traditions and celebrations of Hinduism even more.

Scindia Ghat located nearby the Manikarnika Ghat, Schidia is known for its particular site of interest—the partially submerged Shiva temple at the edge of the water that sunk during the construction of the ghat in 1830.

Although it’s next to impossible to make it to explore every ghat in Varanasi, the ones above are some that have specific significance and are popular among visitors. 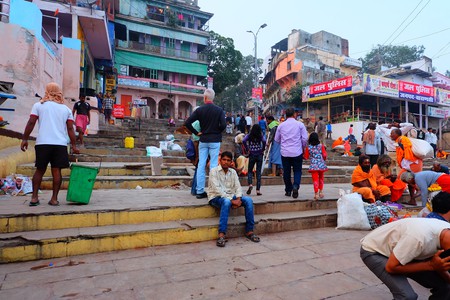 Life on the ghats | © Lauren Marinigh/Twirl The Globe

Each evening, groups of priests line the Dashashwamedh Ghat, and hundreds of people flock to the shoreline and in boats for the nightly aarti ceremony. The ceremony lasts about 20-30 minutes, during which priests perform rituals involving blowing horns, flower petals, bells, incense and smoking pots. Boats all tie together along the water to watch the ceremony and children and locals hop between boats selling snacks and masala chai.

The ceremony starts after sunset (around 6 p.m. in the winter and 7 p.m. in the summer), and getting there early to get yourself a boat with a good spot or the perfect place along the shore is key. The aarti takes place facing the river where the lamps are lit and circled around by the priests, all while being accompanied by chanting or songs that praise Mother Ganga. You may find this ritual so fascinating that you’ll want to attend every night while in Varanasi.

Varanasi is a city full of history, traditions and religion and is a city that can’t be missed while visiting India. Although the city can completely throw your senses into overdrive, no trip to India is complete without a visit here. 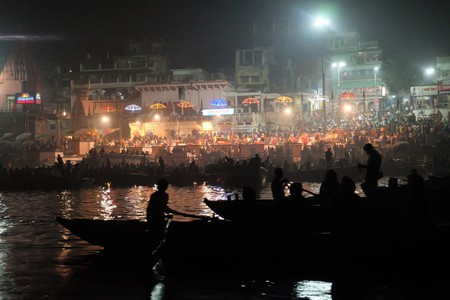 The Ganga Aarti | © Lauren Marinigh/Twirl The Globe
Give us feedback