The History Of The Konark Sun Temple In 1 Minute

The name Konark comes from the combination of the Sanskrit words Kona (corner or angle) and Ark (the sun), in reference to the temple which was dedicated to the Sun God, Surya. The Konark Sun Temple is a 13th-century Hindu temple dedicated to the Sun God. Shaped like a giant chariot, the temple is known for the exquisite stone carvings that cover the entire structure. It is the best-known tourist destination in Orissa and has been a World Heritage Site since 1984. It is located in the village of Konark, which is 35 kilometers north of Puri on the coast of the Bay of Bengal.

Frequently referred to as the Black Pagoda, the Konark Temple was constructed in the mid-13th century by Raja Narasinghs Deva-I of the Ganga Dynasty. The temple is unique in its architecture and is built in the form of a chariot driven by seven horses on 12 pairs of decorated wheels. 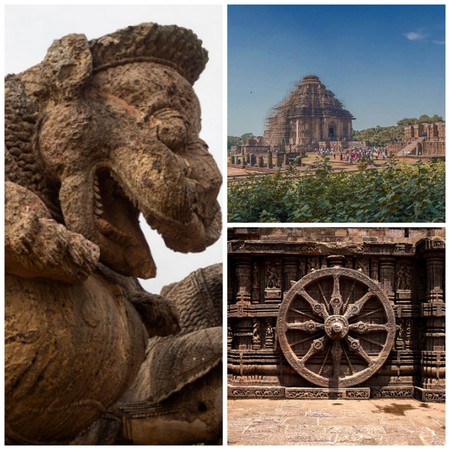 There are beautiful carvings on the wall of the main temple, and then there is the Natya Mandap (a separate structure just in front of the temple). The temple is said to symbolize the passage of time, which is assumed to be governed by the Sun God. The set of horses is meant to represent the seven days of the week, while the 12 pairs of wheels reference the 12 months of the year. Just beyond the porch is a double staircase that leads to a shrine containing a marvelous statue of the Sun God, which is carved out beautifully. Multifarious images can be seen on the walls of the temple that pose animals such as snakes, giraffes, elephants, etc.