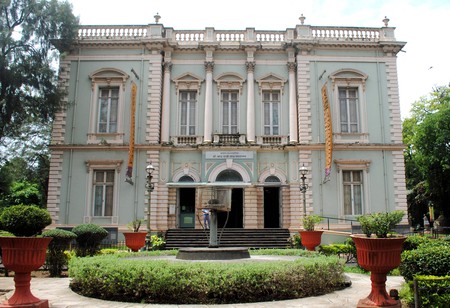 Near the historic Jijamata Udyan botanical garden and zoo in Byculla, you find the Dr Bhau Daji Lad Mumbai City Museum, a unique custodian of the city’s cultural heritage and history. Established in 1855, this grand Palladian building is the oldest museum in Mumbai and the third-oldest in India.

The museum wasn’t open to the public when first established in 1855 as the Central Museum of Natural History, Economy, Geology, Industry and Arts. It housed a collection of duplicates of arts and crafts pieces from India, which had been created to be presented at the first Great Exhibition of the Works of Industry of all Nations – an exhibition reflecting Britain’s colonies – in London. After a spirited drive by prominent citizens to launch a museum as the first major public institution in the city, it opened to the public as the Victoria and Albert Museum in 1872.

The museum committee that oversaw the construction and fundraising was led by Dr George Birdwood, who conceptualised much of the museum’s design, and by Dr Bhau Daji Lad, a prominent physician, historian and philanthropist after whom the museum was renamed in 1975. The committee also included prominent Hindu, Muslim, Parsi and Christian leaders from cosmopolitan Bombay.

Much like the vision of its founders, the museum served as an important institution, highlighting the arts and crafts practices of Bombay residents and greatly interested the public – many of whom hadn’t been to a museum before. Today, the museum’s permanent collection includes historical artefacts, maps, photographs, manuscripts and rare books that document and showcase life in Bombay during the 19th and 20th centuries. Dioramas and clay models – of the city’s earliest boats, textile mills, housing complexes etc. – tell the story of the city’s evolution over the years. The museum has been updating its collections continually, particularly since its renovation in 2008, with contemporary art and other acquisitions, furthering the museum’s relevance in the study of contemporary Mumbai as well.