The History Of Shalimar Bagh, Kashmir In 1 Minute

Built in the year 1619 by Mughal Emperor Jahangir for his beloved wife, Nur Jahan, Shalimar Bagh (also called Farah Baksh and Faiz Baksh) is one of the Mughal Gardens in Srinagar, Kashmir. It lies on the right bank of the Dal Lake, on the outskirts of Kashmir’s summer capital.

The history of the Shalimar Bagh can be traced to the 2nd century. Legend has it that Pravarsena II, who was the founder of the city of Srinagar and reigned in Kashmir from A.D. 79 to 139, had built a cottage for himself in the northeastern corner of Dal Lake and named it Shalimar – the abode or hall of love. Over the years, this cottage fell into ruins, but the village restored the name Shalimar.

It was at this spot that Emperor Jahangir built his dream garden in love for his wife. The emperor affectionately referred to the garden as ‘Farah Baksh,’ which means ‘the delightful.’ Upon the orders of Jahangir, the then-governor of Kashmir, Zafar Khan, extended the project, and this garden became a pleasure place for the governors that followed Zafar Khan. 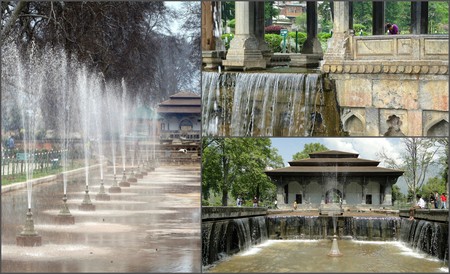 Emperor Jahangir and his wife, Nur Jahan, were so enamored by Kashmir that they would often visit it, crossing the arduous snowy pathways of the Pir Panjal peaks on their elephants. Shalimar Bagh was their imperial summer residence and royal court.

Over the years, the garden has changed many hands and was bestowed with different names; however, ‘Shalimar Bagh’ remains the most popular name. Designed in a Persian style, it covers about 12.4 hectares and has three terraces.

The public garden opens to its first terrace known as the Diwan-e-Aam (hall of public audience) with a small black throne and a water fountain; the second terrace is the Diwan-e-Khas, or the ‘hall of private audience,’ which was used only by the royal courts, noblemen and their guests. The uppermost terrace was reserved for royal women. It is lined with numerous Chinar trees.

The garden is famous for the ‘chini khanas,’ or arched niches, behind the garden waterfalls. These niches used to be lit at night with oil lamps that gave a paradise-like appearance to the waterfalls. Now, flower pots, which reflect their colors from behind the cascading water, adorn the niches.