The History Behind Sati, a Banned Funeral Custom in India 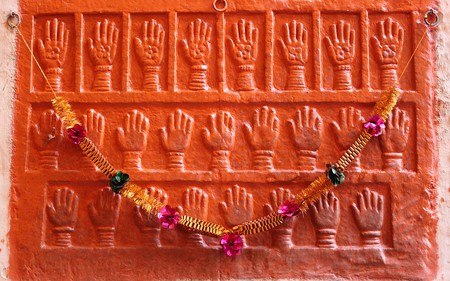 The ancient Hindu tradition called sati, wherein a widow would throw herself on her husband’s pyre and burn to death, was initially a voluntary act considered courageous and heroic, but it later became a forced practice. Although sati is now banned all over India, it has a dark history. Culture Trip reports. 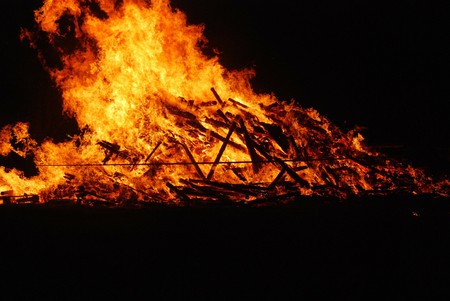 What does sati mean?

“Sati” originally meant a woman who performed the act of immolating herself after her husband’s death. The word is derived from the Sanskrit word “asti’, which means “She is pure or true”.

In mythological terms, Sati was the name of the wife of Lord Shiva. Her father never respected Shiva and often despised him. To protest against the hatred that her father held for her husband, she burned herself. While she was burning, she prayed to be reborn as Shiva’s wife again. This did happen, and her new incarnation was called Parvati. People used to justify the practice based on this tale, but when Sati burned herself, she wasn’t a window, and thus the practice is quite unrelated to this tale. 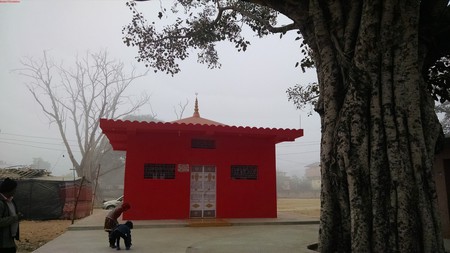 From voluntary to forced

According to ancient Hindu customs, sati symbolised closure to a marriage. It was a voluntary act in which, as a sign of being a dutiful wife, a woman followed her husband to the afterlife. It was, therefore, considered to be the greatest form of devotion of a wife towards her dead husband.

With time, it became a forced practice. Women who did not wish to die like this were forced to do so in different ways. Traditionally, a widow had no role to play in society and was considered a burden. So, if a woman had no surviving children who could support her, she was pressurised to accept sati. 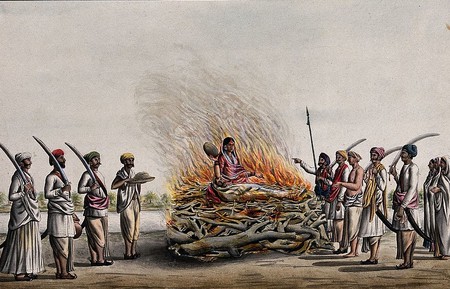 Historical records tell us that sati first appeared between 320CE to 550CE, during the rule of Gupta Empire. Incidents of sati were first recorded in Nepal in 464CE, and later on in Madhya Pradesh in 510CE. The practice then spread to Rajasthan, where most number of sati cases happened over the centuries.

Initially, the practice of sati was confined to royal families of the Kshatriya caste and only later spread to the lower castes, becoming widely practised among all social classes.

Sati was at its peak between the 15th and 18th centuries. During this period, as many as 1000 widows were burned alive every year, most commonly in India and Nepal. However, records show that the practice was also popular in other traditions and in countries like Russia, Fiji and Vietnam.

Various accounts tell us about different ways in which the ritual of sati was carried out. Most accounts either describe women seated on their husbands’ funeral pyre or lying down next to the dead body. Some say women would jump or walk into the pyre after it had been lit, while others report that women would sit on the pyre and then light it themselves. The practice also varied from region to region. In some places, a small hut was constructed for the widow and her deceased husband. In several other regions, the corpse of the husband was placed in a pit along with combustible raw materials, and then the widow was required to jump in after the fire had been lit.

Some less torturous methods of execution were also prevalent back then. For example, before being placed on the funeral pyre, a woman could take poison or drugs, so that she would either start dying slowly or at least become unconscious. Sometimes, the widow herself would get snake-bitten or use a sharp blade on her throat or wrist before entering the pyre. 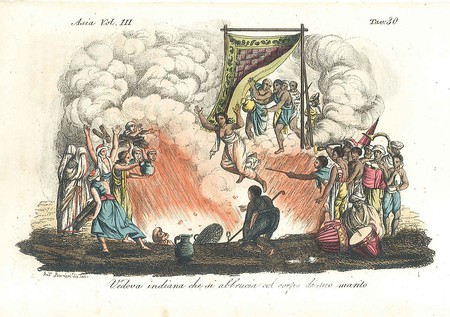 A picture depicting the practice of sati | © Giulio Ferrario / WikiCommons

There were, however, certain rules that exempted some women from this practice. The first sati rule stated that any widow who was pregnant, menstruating or had very young children, couldn’t partake in this ritual.

Women who committed sati were said to have died chaste, which, people believed, meant she would have good karma and a much better life in her next birth. But this justification didn’t work for Brahmin women as they already belonged to the highest caste, so karmically they couldn’t benefit from sati and thus did not have to practise it.

Sati was frequently practised in Rajasthan, more specifically by the women of royal families. A sati stone was created, which was a memorial of all the wives of the kings who died this way. Before giving up their lives, the queens left their handprints on the wall, to be remembered as valiant and devotional wives. Some of these handprints can still be found inside the Mehrangarh Fort. 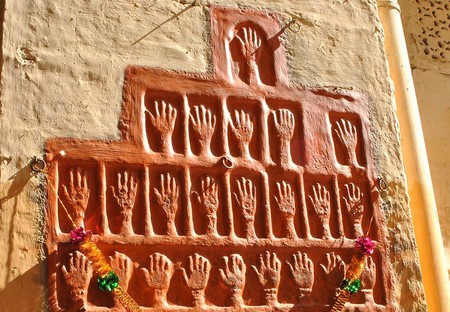 Sati handprints on the wall of Mehrangarh Fort | © Schwiki / WikiCommons 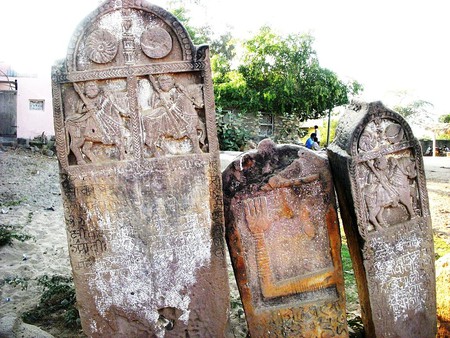 A different version of sati – Jauhar

Rajputs from Rajasthan and Madhya Pradesh practised Jauhar. This was collective suicide by the widows of the royal families who preferred dying, rather than being captured, raped and disgraced by soldiers who defeated their kings in the wars. This practice grew in the 14th and 15th centuries, when the Hindu-Muslim wars were at their peak in northwest India. To commit Jauhar, special flammable rooms were built inside the forts out of lacquer and other combustible materials. The practice of Jauhar has been well depicted in the Bollywood movie Padmavat. 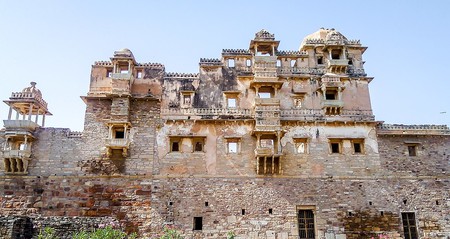 Jauhar Kund of Chittorgarh Fort from the outside | © P12CO012 / WikiCommons

If historical facts are to be believed, the practice of sati was prohibited many times between 15th and 18th centuries. In 1582, Mughal Emperor Akbar outlawed sati, and in 1663, Aurangzeb tried to end it again. Even the Portuguese, French and British, who came to India during the European colonial period, tried to stop sati. In 1850, the British hardened their rules against the practice. Sir Charles Napier ordered to hang to death any Hindu priest who presided over a widow burning. The princely states of India during that time were also pressurised to rule out sati completely. Raja Ram Mohan Roy was one of the key reformers who opposed the practice.

In 1987, in the village of Deorala in Rajasthan, an 18-year-old married woman named Roop Kanwar was forced to become sati when her husband died after eight months of marriage. She refused. Consequently, a group of men from the village forcefully drugged and immolated her. Police investigated the case and those men were arrested. In light of this incident, the government created the Prevention of Sati Act, making it illegal to force or encourage a woman to commit sati, and anyone doing so would be punished by death. And yet, some widows still choose to become sati – at least four such cases were recorded between 2000 and 2015.