The Bookstore That Traveled Across India 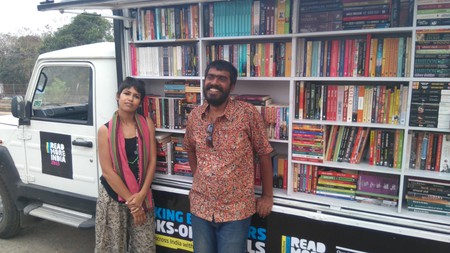 (L to R) Shatabdi and Akshaya; the people behind the walking bookshop | © Prabuddha Jagadeb

A mobile bookstore over 10,000 km to spread literature across the Indian subcontinent. We sat down with the two owners of this wondrous endeavor.

It is close to four in the afternoon, and opposite to a well-appointed park in Bhubaneswar in the Eastern state of India, a spot favored by children, a mini-truck rolls to a stop. Two people get down from the cabin, roll down the shutters of the carrier and lo, a bookshop-cum-exhibition unveils itself!

Hard to believe, but in the last three months, the mobile bookshop and expo has covered the entirety of India – its nooks and corners, small hamlets and sleepy rural towns and big and upcoming metros – taking books to people. ‘Ninety days, 20 states, 10,000 km,’ proclaims the mission statement emblazoned on the truck. Their goal is to re-kindle and cultivate the passion for reading, a habit that is quickly dying among fast-growing consumerism and other forms of engagement, as observed by the promoters – Shatabdi and Akshaya. Three leading publishers support this venture.

The duo, who run a bookstore in Bhubaneswar in Odisha, thought of the Walking Bookstore as a medium to bring books to public spaces where prospective readers might gather. ‘There are not just enough bookstores even though malls and supermarkets are cropping up everywhere,’ they assert. So the idea was to make books accessible, with the bookstore also doubling up as a library for the time it remains open. ‘Anyone can come and browse a book for as long as we are here – a facility not an option in many book outlets today.’ 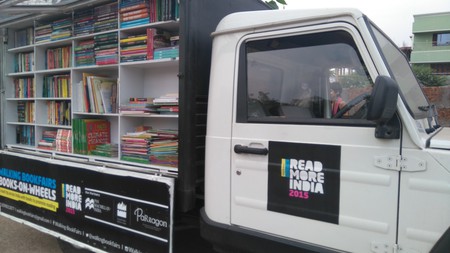 The Walking Bookshop that carries 4,000 books

Before turning biblio-crusaders, Shatabdi dabbled in a lot of things like marketing but decided this is what she wanted to do when the bookstore idea emerged. Akshaya, however, worked with a few retail book chains before taking the plunge. But the idea of taking books to the masses is the one that motivated them deeply – and they built this truck on a Tempo mini truck chasis so that it could carry 4,000 books at one go.

The book carries a mix of titles for all ages and from all genres – there are picture books for children and those who can’t read but learn a story from pictures; there are early readers; there are popular classics; there is contemporary literature; and there are coffee table books. ‘Before starting into Hindi heartland, we loaded the book[shop] with hundreds of Hindi titles so that more people could read,’ said Shatabdi, who drove the van all across the country.

During their trip they came across children and people eager to read, people thirsty for knowledge and hungry for books. They were offered great hospitality in small towns, faced bad roads and weather and even met children who hadn’t seen a storybook before. ‘Clearly, we need more public places where books could be made more accessible. This is the need of the hour. We see malls, multiplexes, markets cropping up everywhere but not libraries. Why?’ says a disappointed Shatabdi. ‘And we can’t blame if kids are taking to other forms of engagement if they don’t have access to books.’

‘The habit of readership, therefore, is dwindling. Those who can afford books don’t read; those who can’t buy don’t read; and an extremely poor man won’t buy a book no matter what discount I offer,’ says Akshay, putting a question mark on the whole cultural crossroad that India finds itself today.