ASIA
/
INDIA
/
BANGALORE
/
Things to Do 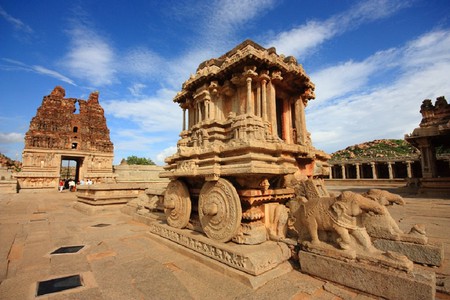 Karnataka is one of the most richly endowed states in India. With a mix of natural beauty as well as man-made wonders, the region is full of astounding locales. And many of these places can be visited a short ride away from the capital city of Bangalore. You’ll never be short of places to explore during the weekends from the city – here are ten of the best getaways.

Vidurashwatha is a small village which got its name from a legend in Mahabharata. According to the myth, Vidura, brother of Emperor Dhritarashtra, planted Ashwatha – the sacred fig tree here. The ancient tree fell in 2001. The place is also known as the Jallianwala Bagh of the South.

Lepakshi is a village situated on the Karnataka–Andhra Pradesh border, to the north of Bengaluru. The Veerabhadra Temple complex situated here is a testament of the architectural prowess exhibited by the Vijayanagar Dynasty. The sprawling temple complex is known for the hanging pillar, mural paintings, intricate sculptures, and the monoliths of Nandi and Nagalinga. 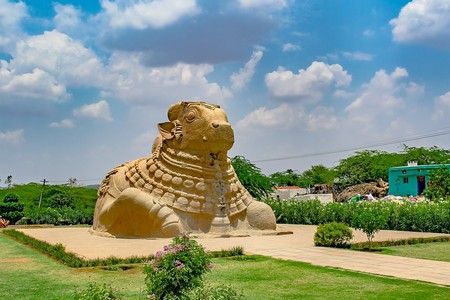 Puttaparthi in Anantpur district of Andhra Pradesh is a religious destination known around the world as the birthplace of Sri Sathya Sai Baba and the ashram founded here by him is called Prasanthi Nilayam – the abode of highest peace. If not for religious reasons, the ashram must be visited to experience its architectural beauty. 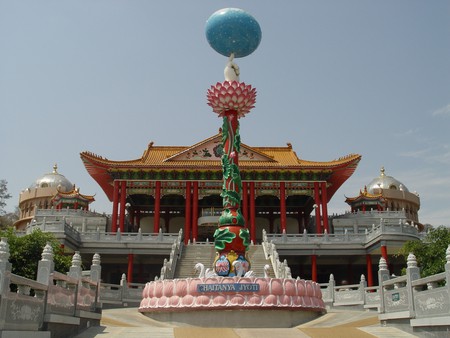 Kundura Betta is an almost unexplored rocky mountain with thick shrubbery. The place is untouched and offers a trekking option from the Rashasideswara Temple at the bottom to the Mallikarjuna Temple at the middle of the hill. The rock strewn trail is not marked and is really exhausting but the view from the top is absolutely worth the toil. 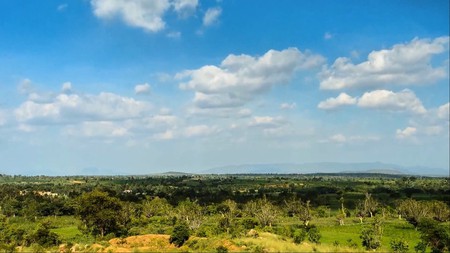 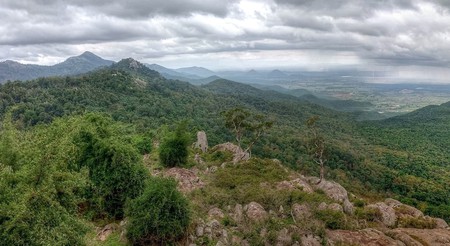 The fantastic Shivanasamudra Falls is on the Kaveri River after the river has found its way through the rocky ravines of the Deccan Plateau. It is a perennial waterfall and the most voluminous flows can be seen after the monsoon season. Other nearby points of interest are Dargah view-point, Barachukki Falls, you can coracle ride to the falls. 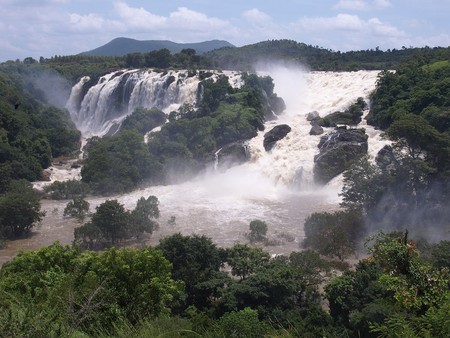 Talakadu in southern Karnataka is an intriguing historical site dotted with architectural wonders which are buried in sand. The Archaeological Survey of India is conducting excavations to unearth these buried wonders. The Vaidyanatheswara Temple along with four others – Arkeswara Temple, Pathaleswara Temple, Maraleswara Temple, and Mallikarjuna Temple, form the Pancha Lingas believed to represent the five faces of Lord Siva. Other places of importance are Tirumakudal Narsipur, Keerthi-Narayana Temple, and Kaveri river-front. 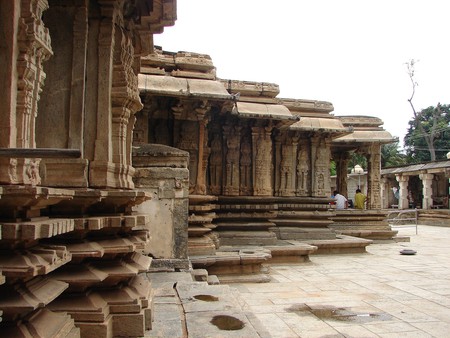 Outer walls of the Vaidyeswara Temple in Talakadu | © Dineshkannambadi/Wikimedia Commons

Chennakesava Temple on the banks of River Kaveri in Somanathapura, Karnataka, is situated at 25km from Talakadu. The ornate temple is a model illustration of the famous Hoysala architecture and is a spellbinding site. 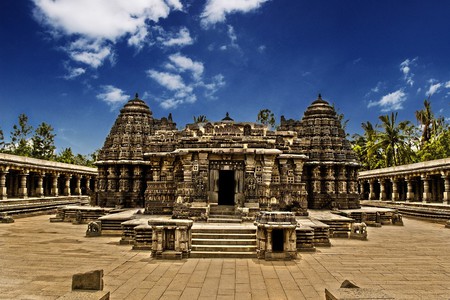 The temple was consecrated in 1258 CE by Somanatha Dandanayaka, a general of the Hoysala King Narasimha III | © Jean-Pierre Dalbéra/Flickr

Srirangapatna was a formidable cosmopolitan 200 years back and the citadel of the Mysore Kingdom for many decades. Today it appears unassuming and nondescript. The final battle, ‘Siege of Srirangapatnam’, of the fourth war between the British East India Company and Tipu Sultan’s Mysore Kingdom was fought here, where Tipu Sultan was killed. The main spots of attraction are Sri Ranganathaswamy Temple, Dari Daulat Bagh, Tipu Sultan Gumbaz, Karighatta Temple, Bailey’s Dungeon, and Srirangapatnam Fort 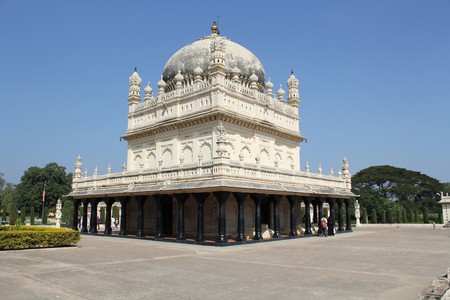 Mysore aka Mysuru is the third largest city of Karnataka. The cultural ambience of Mysore earned it the nickname Cultural Capital of Karnataka. Mysore is famous for its palaces and heritage monuments. It served as the capital city of the Kingdom of Mysore for nearly six centuries from 1399 until 1956. The major significant locations are Jaganmohan Palace, Chamundeswari Temple, Mysore Sand Sculpture Museum, St Philomena’s Cathedral, among many others. 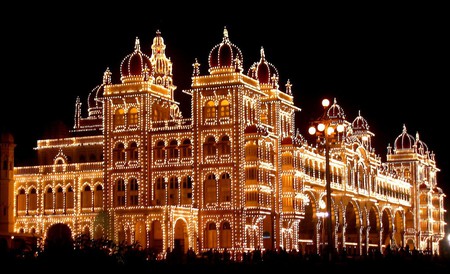 Shravanabelagola is one of the most popular Jain pilgrimage centres in South India. The 17m (57 ft.) high monolithic Gommateswara Bahubali statue present on one of the two hills here was built around 983 CE and is one of the tallest free standing statues in the world. Other exciting places are Gomateswara Bahubali Temple, Chamundaraya Basadi, Kambadahalli, Badrabahu Cave, Vindhyagiri, Chandragiri, among other places 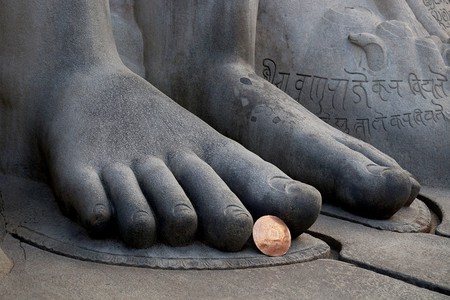 The Gomateswara Bahubali statue, built in 983 CE, is one of the most important tirthas (pilgrimage destination) in Jainism | © pudiravi0/Pixabay

Melukote is an important sacred place in Karnataka. The impressive Yoga-Narasimha Temple perched high on the Yadugiri Hills is the biggest allure here. Cheluva-Narayana Swamy Temple is another important attraction in Melukote. Also visit Thondanoor which is a nearby temple town and is the location of the many famous temples. 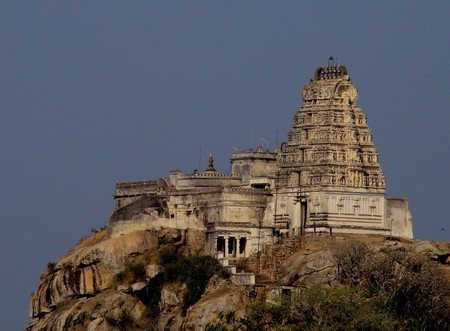 Hogenakkal Falls is on the Kaveri River in Tamil Nadu. The name Hogenakkal is derived from two Kannada words: hoge – smoke and kal – rock, hence, literally translates to ‘smoking rocks’. The waterfall is given the name because the force of the water during the fall appears as smoke rising from the top of the rocks. 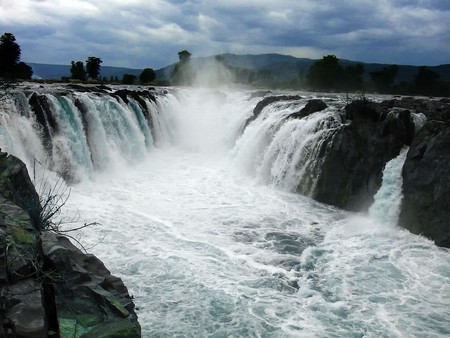 Yercaud is a hill station in Tamil Nadu, located in the Eastern Ghats, at an elevation of 1,515m (4,970 ft.) above sea level (ASL). Splendid trekking options are available at Yercaud and it is one of the best places to unwind on a weekend. 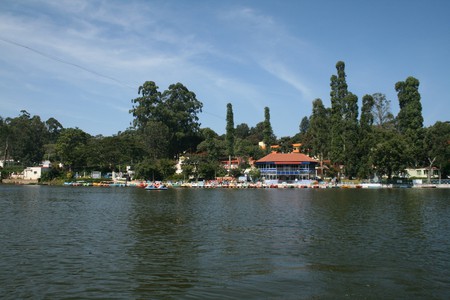 Coorg aka Kodagu is known for its coffee and people. Kodagu is locally known as Kodavanadu – land of Kodava people who are the indigenous people of Kodagu. It is a hilly district located on the eastern slopes of the Western Ghats. The highest peak here is Tadiandamol rising to 1,750m (5,740 ft.) ASL. The main sites of appeal are Abbi Falls, Madikeri Fort, Tashi Lhunpo Monastery, Namrodoling Monastery, Dubare Elephant Camp, Nalkanad Palace, Tadiandamol peak trek among others. 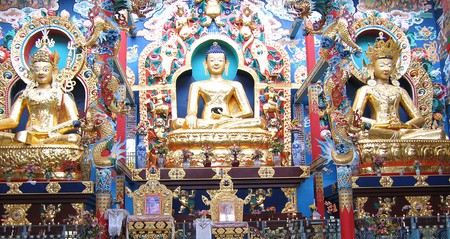 Hassan district was the seat of Hoysala Empire which at its peak ruled most of South India from Belur and later from Halebeedu. The Hoysala era was an important period in development of art and architecture. Temples in Hoysala architecture exhibit a stupendous display of sculptural exuberance. The most famous of them are the Hoysaleswara Temple in Halebeedu and the Chennakesava Temple in Belur. Other charming areas are Lakshmi Devi Temple in Doddagaddavalli, Archaeological Museum, Basadi Temple Complex, and Kedareswara Temple in Halebeedu, Bucheswara Temple in Korvangla, Lakshmi-Narasimha Swamy Temple in Nuggehalli, and Veera-Narayana Temple at Belavadi. 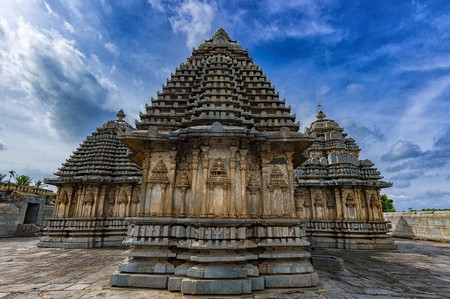 A rock cut edict of Emperor Ashoka reveals that Chitradurga was part of the Mauryan Empire dating to the 3rd century BCE. Local traditions date Chitradurga to the period of Ramayana and Mahabharata. Other enchanting places include Chitradurga Fort, Obavanna Kindi, Chandravalli Archaeological Site, Jogimatti Peak, Aadumalleswara, and Tuppada Kola. 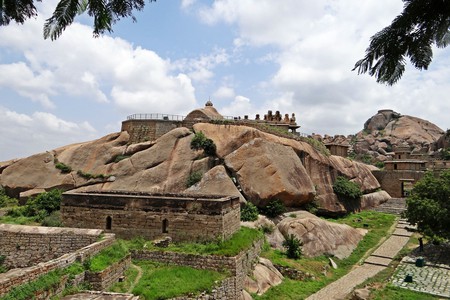 Chikmagalur is a paradise for trekkers and nature lovers. Some of the most picturesque treks of South India are to peaks in Chikmagalur district. Must-do activities in Chikmagalur are Kudremukh peak trek, Mullayanagiri peak trek, and Kemmannugundi peak trek. If you enjoy long drives, take the Devaramane–Charmadi-Chikamagalur route which will leave you awestruck with some fantastic views. This route will make the return trip 626km (389 mi.). 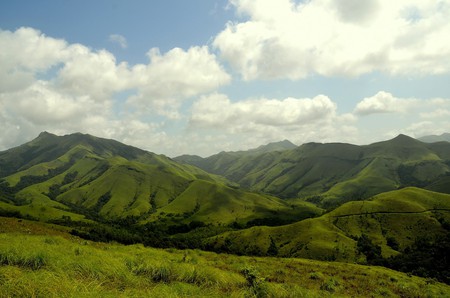 The views offered by Kudremukh peak is breathtaking | © Vikas.rumale/Wikimedia Commons
Give us feedback