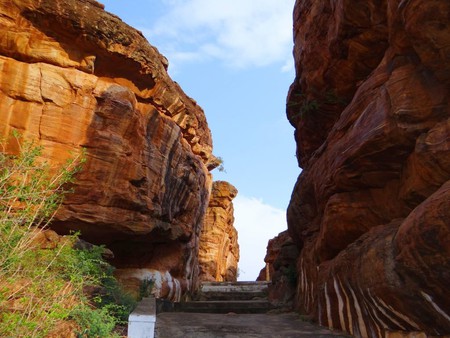 Every state in India has a story to tell, of kings and their kingdoms, of invasions, temples and many beautiful sites to show. Karnataka is a blessed state with beaches, architectural wonders, nature’s breathtaking assets, palaces and so much more. Here are the best travel destinations in Karnataka.

There are clusters of intricately-carved stone temples in Badami, Aihole and Pattadakal, all three of them 10 to 35 kilometers apart from one another on the banks of river Malaprabha. These stone structures were built in Karnata Dravida architectural style from the 6th through 12th-century when Chalukya kingdom reigned over South India. 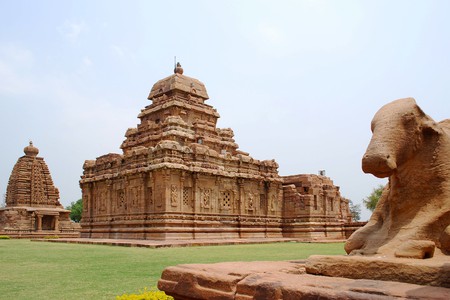 One of the richest cities in the world in the medieval period, Hampi is a city on the banks of the river Tungabhadra in Karnataka. It is famous for the 14th-century monuments built when Vijayanagara Empire ruled the district. It is a UNESCO World Heritage site that houses many temples. 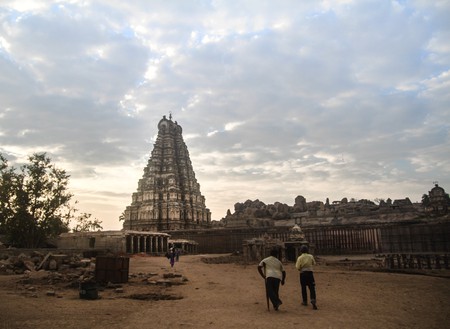 The rock-cut temples and monuments in Hampi | © Mohit Modi

Mysore Palace was commissioned by Rajarshi Krishnaraja Wodeyar IV in 1897. Since 1912 until today, the palace is home to the Wodeyar family. The architecture of the palace is majorly Indo-Saracenic and had Mughal, Hindu, Gothic and Rajputs bits. 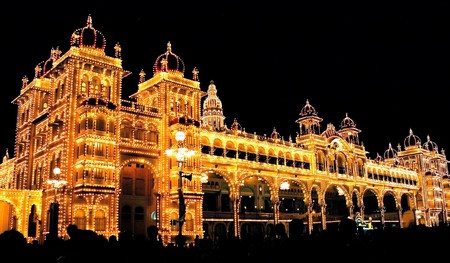 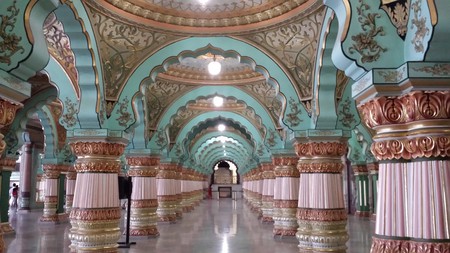 Chitradurga Fort is named after the district in Karnataka and was first built by the Chalukyas in the 11th-century and expanded several times by the successive empires that ruled Karnataka. At one time it was known as ‘ukkina kote’ which means ‘steel fort’ or the impregnable fort. It is situated in a valley, by the river Vadavati. 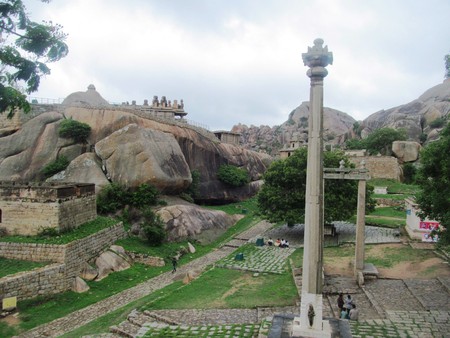 The view of Chitradurga fort from the inside | © Haneeshkm / flickr 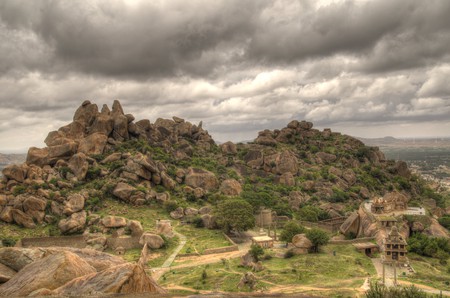 Gokarna is one of the seven significant Hindu pilgrimage sites and mostly known for Mahabaleshwara temple that worships Lord Shiva. Gokarna has the Western Ghats on one side and the Arabian Sea on the other. The beach is a majestic place to watch the sunset. Karwar beach, not too far away from Gokarna, is in Karwar village that was a training camp during World War II. Visitors can also see Kurumgad Island and Anjediva Island from the beach! 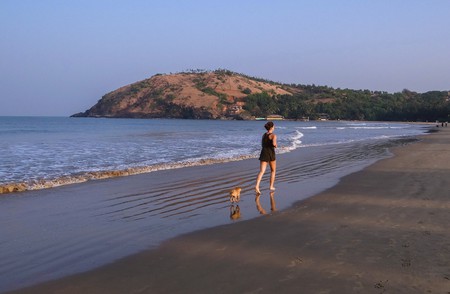 Gokarna is situated in the Northern part of Karnataka | © sarangib / pixabay 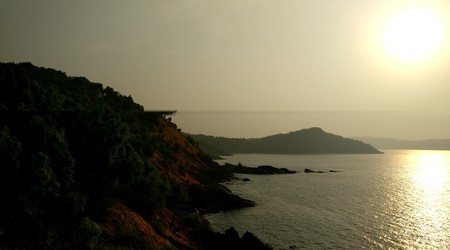 Mullayanagiri is the highest peak in Chandra Dhrona range in Chikkamagaluru district of Karnataka. Trekking to the peak is an especially adventurous and beautiful journey and the sunset view from the top is absolutely worth the mildly-difficult climb. 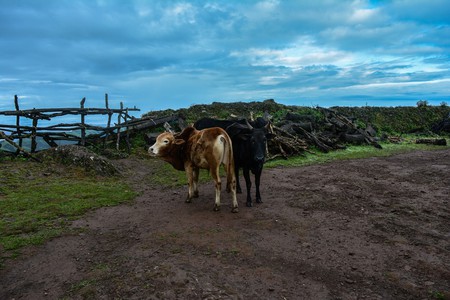 Mullayanagiri falls on the Western Ghats of India | © Prashe / pixabay

Sivasamudram is a small city in Karnataka on the banks of river Kaveri and popular for its beautiful waterfalls. The best time to see the falls in full glory is between July and October. The round ‘saucer-shape’ boats are used for transport. 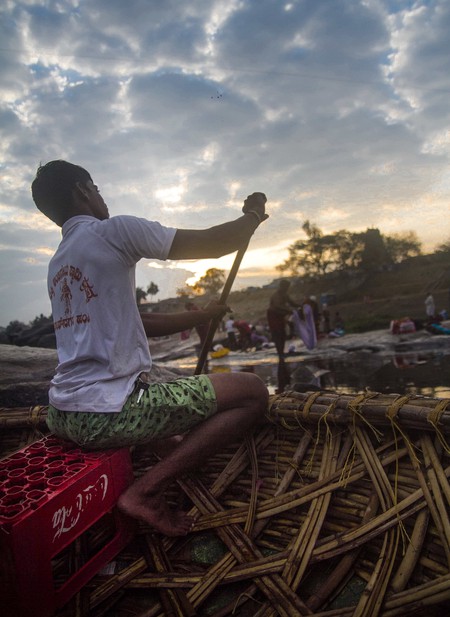 The round 'sauce-kind' boats are used to travel | © Mohit Modi 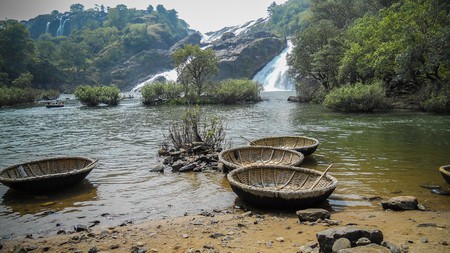 These round concave handmade boats are used for transportation in Sivasamudram, Karnataka | © Rockuzz / flickr 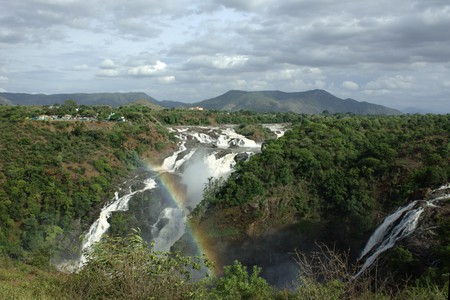 Nagarhole National Park, also called Rajiv Gandhi National Park, is part of the Nilgiri Biosphere Reserve. The park has incredible wildlife, including mammals, birds, insects and reptiles inhabiting amidst hills, valleys and waterfalls. Then there is Bandipur National Park, which is a dry forest park. 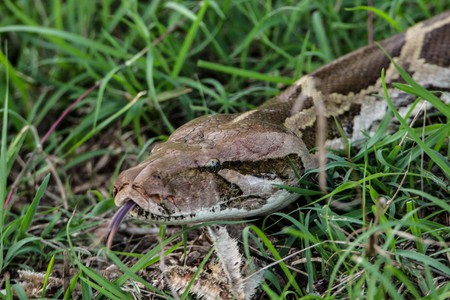 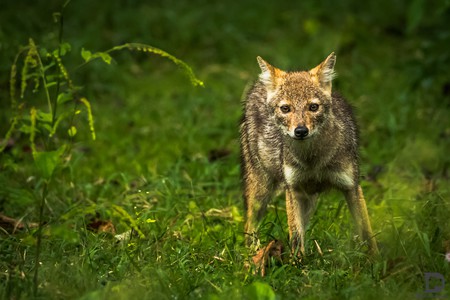 Halebidu temple was built in the 12th-century by the ruler of Hoysala Empire. Although the temple was harmed by the Mughal emperors who tried to invade the area, the temple is mostly intact. The carvings on stone throughout the temple exterior are a marvelous sight. 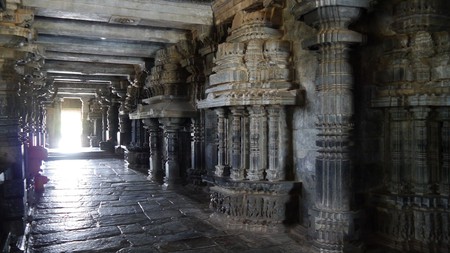