The Best Things to See and Do in Spiti Valley, India 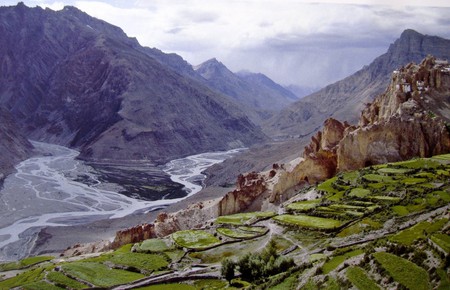 Set at an elevation of 3,810 meters (12,500 ft) in the northern Indian state of Himachal Pradesh, Spiti Valley has often fallen under the tourists’ radar in comparison to its ever-popular cousin, Ladakh. But with soaring mountains blanketed in snow, surreal landscapes, abundant trekking trails, whitewashed postcard hamlets, ancient monasteries and scenic lakes, this cold desert mountain valley is worthy of attention. For a rundown of the best things to do and see in Spiti Valley, keep reading.

Spiti is a religious and cultural center for Buddhists, and many Buddhist monasteries are scattered throughout the valley. The biggest Tibetan monastery is the fort-like Key (Ki) Monastery, set at an elevation of 4,166 meters (13,668 ft) and overlooking the Spiti River. Otherwise known as Key Gompa, this monastery was built in the Pasada style of architecture. The interiors are adorned with unique and rare Thangkas, ancient murals and weapons, along with the images of Gautam Buddha. The scenic backdrop provided by the snow-laden peaks and glaciers add to its charm.

Try visiting this monastery in late July, during the annual three-day Chaam festival, where masked dances, spinning prayer wheels and ancient rituals will transport you into the spiritual trance.

Tip: Trek your way to the monastery or rent a car/hitch-hike. There are no eateries there, so pack some food to take. The best time to visit is May to October. 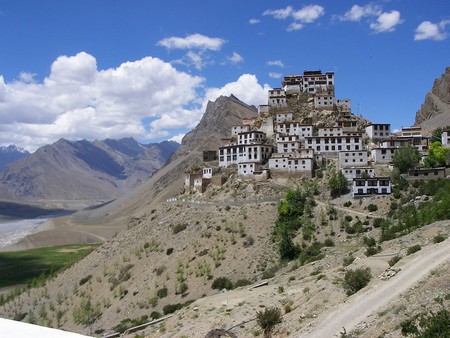 There are several more Tibetan monasteries worth-visiting. The Tabo Monastery dates back to 996 AD and houses nine temples of Tara and Maitreye Buddha, meditative caves where you can contemplate in peace, 23 chortens, ancient paintings and murals, and Tibetan artwork. The Lhalung Monastery is the center of Buddhist teachings, and often referred to as the Golden Temple, owing to its gold-leaf deities in the shrine. Other monasteries worth visiting are Dhankar, Gandhola and Komic Gompa.

Because of its crescent shape, this lake is known as Chandra Taal, meaning ‘Lake of the Moon’. It is situated at 4,300 meters (14,107 ft) in the lap of the Himalayas, and is characterized by vast swathes of green meadows and a backdrop of snow-covered mountains, which makes it perfect for camping with an incredible view. A major highlight of this lake is that it changes its colour throughout the day, turning an emerald green as the day ends.

Tip: Visit from May to September, as the rest of the year it remains frozen. 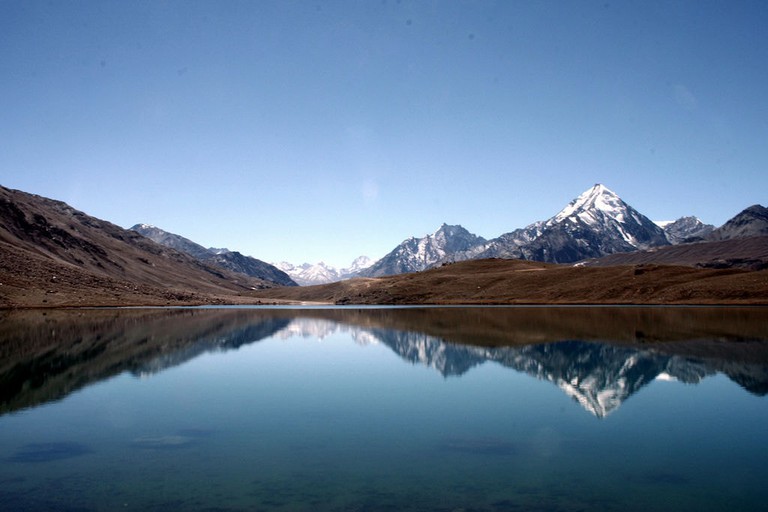 Bike and trek in nature

Be one with nature at the emerald-green Suraj Taal, meaning ‘Lake of the Sun God’. Fed with the Bara-lacha-la Glacier, it is the third highest lake in the country, at an altitude of 4,883 meters (16,020 ft). The area around the lake is perfect for mountain biking and trekking. It also happens to be a pit-stop for trekkers and mountain bikers on the famous Manali-Leh trail. 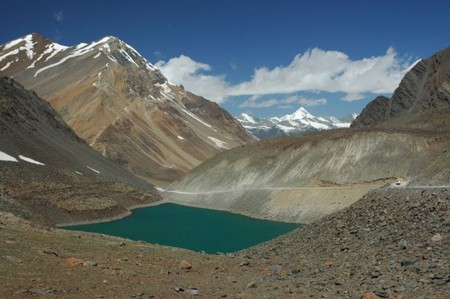 If you’re looking for some peace and quiet, trek to the Dhankar Lake, perched above the Dhankar Monastery. The trek is a bit arduous, but those who take up the challenge are rewarded with the jaw-dropping vistas of the mountains, crystal-clear lake water, and picturesque villages below. 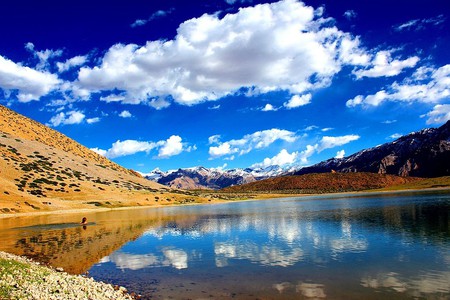 Joining a trekking expedition for as little as two days or as long as ten will allow you to camp out or sleep in tiny hamlets along the way. The Spiti Valley offers all kinds of trekking trails and of varying grades of difficulty. Some of the popular ones are:

All these treks require a certain level of fitness and can be a bit physically taxing, but worth it for the views. 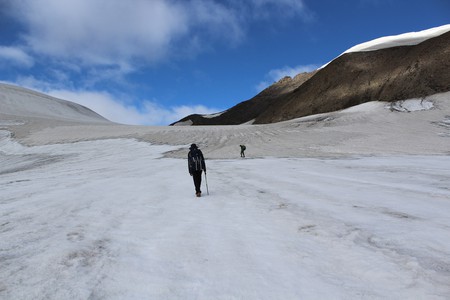 Village to village treks are also possible, like Kaza to Langza, Komic to Lalung via Demul, Lalung to Kaza via Dhankar and Tabo. 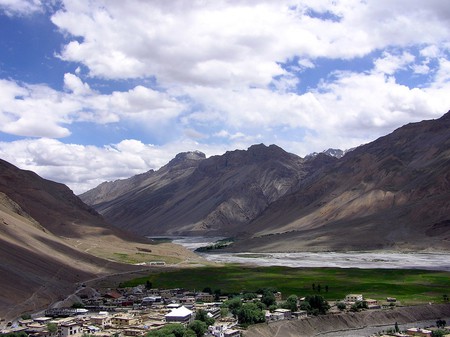 Visit a mummy in the village of Giu

Perched at 3,200 meters (10,499 ft), the village of Giu is home to a 500-year old mummy kept in a glass chamber. It’s a naturally preserved ,with hair and teeth intact. According to local folklore, the mummy is of a meditating lama, whose body was buried under a glacier during an avalanche, remaining there for more than 500 years until it was found by Indo-Tibetan police force personnel. Some consider it a living god and believe it has been looking after the hamlet for centuries. There are many explanations for its existence, but whatever the truth, it is worth visiting. 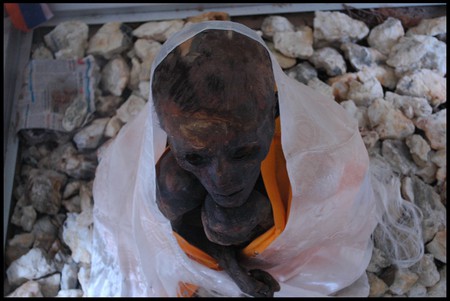 To experience Spiti like a local, opt for a local ride; that is, a yak safari. Almost all village families have at least one yak. If you aren’t up for trekking, this is a perfect alternative. 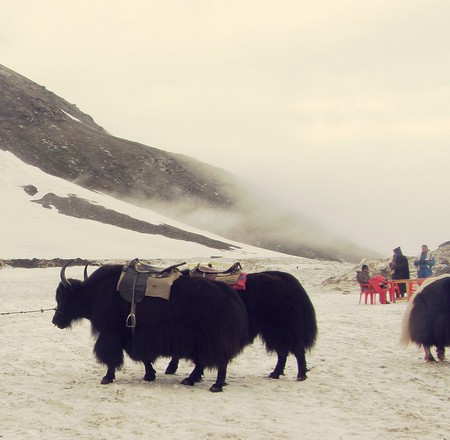 Adrenaline junkies looking for more than a yak safari or trekking should go whitewater rafting. Snowy mountains, hilltop monasteries, whitewashed settlements and wonderful scenery around every bend, Spiti is a perfect place to enjoy this water sport. The Spiti and Pin Rivers offer whitewater rafting opportunities. 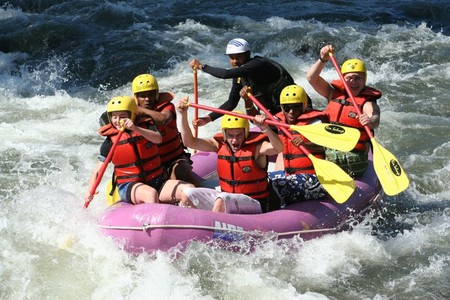 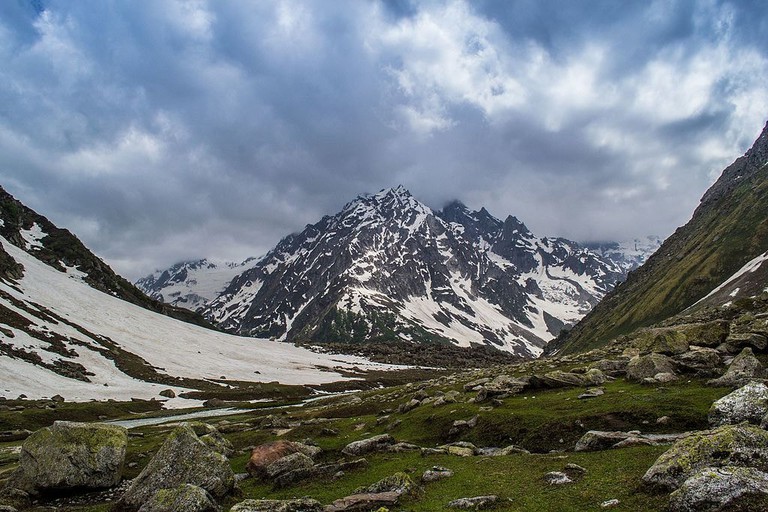 Post Office
Facebook
Email
Twitter
Pinterest
Copy link
Share
Map View
Perched at 4,389 meters (14,400 ft) between Komik and Langza villages is Hikkim, the world’s highest post office. It’s said to have been functional since 1983. It’s an hour or two from Kaza by cab, or trek uphill from the village of Kaza: the path is precariously carved into the barren mountains, but it’s well worth the hike.
Open In Google Maps
Hikkim, Himachal Pradesh, 172114, India
Visit Website
Give us feedback

To experience true local hospitality, explore the charming villages of Spiti Valley. Discover how the inhabitants of the valley survive the cold weather, and indulge in local cuisine. Some villages worth exploring are:

Other villages include Demul, Dhankar and Llalung. 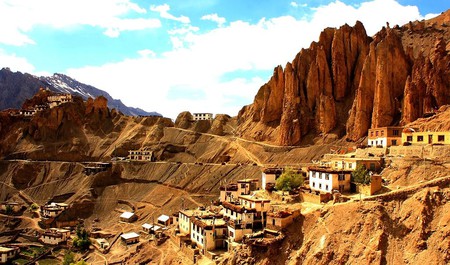