The Best Things to See and Do in Madurai, Tamil Nadu 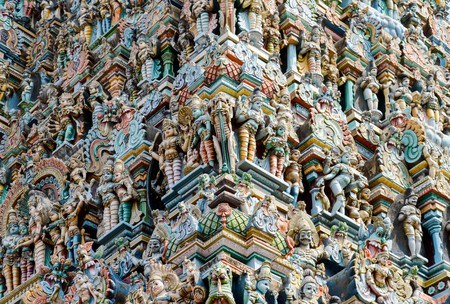 Madurai is a city steeped in antiquity. The place has been a rich settlement for over 2000 years. As a result, the city is famous for its temples that boast astounding architecture. A number of dynasties have ruled over the place, such as the Pandya, Chola, Vijaynagara empires, and all of them have left their influences upon Madurai. Consequently, the city is renowned for a plethora of monuments.

Catch a glimpse of Goddess Meenakshi at Meenakshi Temple

The historic Meenakshi Amman Temple or Meenakshi-Sundereshwara Temple, dedicated to Goddess Parvati and Lord Shiva, is a major pilgrimage destination in South India. The contemporary complex was rebuilt in the 14th century and further refurbished and expanded in the 17th century, though it is believed to be as old as Madurai. The temple is adorned with exquisitely sculptured 14 gopuram, the tallest being 49m (160.9 ft.) and several halls with awe-inspiring sculptures from mythological stories. The most astonishing structure of the temple is the Ayiramkaal Mandapam – Hall of Thousand Pillars – with life like sculptures adorning every pillar. 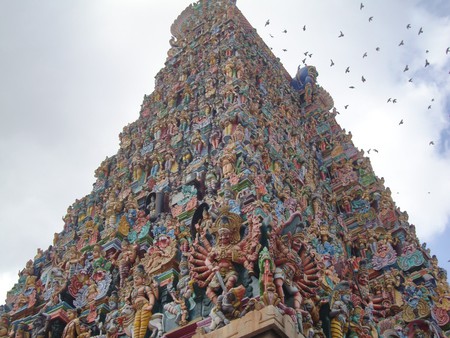 Madurai Nayak dynasty ruled over a major chunk of present day Tamil Nadu for over 200 year until 1736. Thirumalai Nayak Palace was built by one of the most notable 17th century Madurai Nayak kings, Thirumalai Nayak, in 1636. The palace complex is an amalgamation of Dravidian and Rajput styles of architecture and is believed to have been at least four times larger. Today, it is under the protection of Tamil Nadu Archaeological Department. The grandeur infused by the excellent workmanship can only let us imagine how spectacular it would have been when newly built. 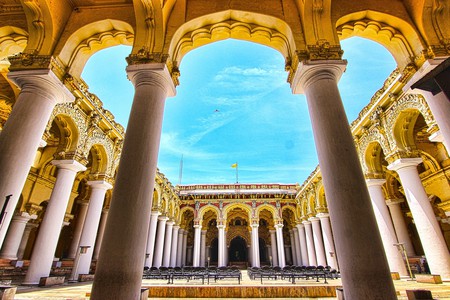 Mahatma Gandhi is the father of the nation in India, who is respected and loved throughout the world for his lessons on non-violence and integration of communities. His words have inspired many battles against imperialism across many countries. The Gandhi Memorial Museum offers a glimpse into the life and work of the great man. It celebrates his fight against untouchability and the various non-violence movements he organised and led for swaraj – self-governance – from the British imperialists. The museum is housed in Rani Mangammal Palace and also organises activities like yoga classes, pranayama and meditation classes. 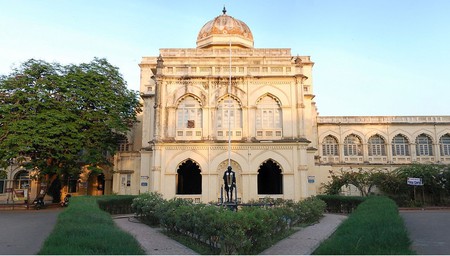 Immerse in the celebrations of Chithirai festival

The annual temple festival of Meenakshi Amman Temple is called Chithirai Thiruvizha, when the celestial marriage of Meenakshi (form of Goddess Parvati) and Sundereshwara (Lord Shiva) is celebrated. The festival takes place in Chithirai (April-May) month from the first day of the Tamil New Year. Millions congregate from across the country to take part in this 12 day extravaganza. The celestial marriage (Thirukalyanam) is reenacted on the tenth day. Grand processions of the married couple are held on 11th (­Ther Thiruvizha – Chariot procession) and 12th (Theppa Thiruvizha – Float procession) days of the festival. 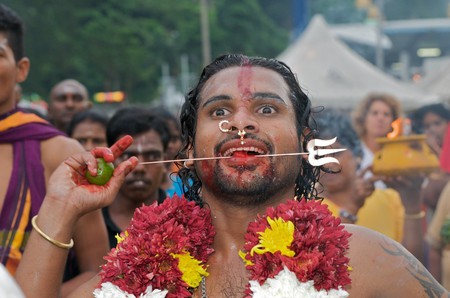 A devotee during the Thai Pooyam festival | © Peter Gronemann / Flickr

Gape at the elaborate Madurai Maqbara

Madurai Maqbara, the dargah (shrine) of Madurai Hazrats who were the descendants of Prophet Muhammad, is located inside the Kazimar Periya Pallivasal mosque. The land for the mosque was gifted to Kazi Syed Tajuddin, a descendant of the Prophet, who came from Yemen in the 13th century. Since then, almost all of his descendants have lived in the same locality, Kazimar Street, for more than 700 years, and managed the mosque. Even today, his descendants are appointed as Kazi to the Government of Tamil Nadu.

Join the fervour of Jallikattu

Jallikettu is practiced as part of the Pongal celebrations, the most important festival for the Tamilians. This ancient tradition is practiced with bulls of local breeds being set loose into a crude arena as people watch the spectacle. The objective is for the human participants to grab on to the bull’s hump, survive the bull’s attempt to dislodge them until the bull is subdued and comes to a stop. Sometimes the bull has flags tied onto its horns which have to be retrieved to claim victory. Jallikattu is celebrated annually in January and is a spectacle to behold. 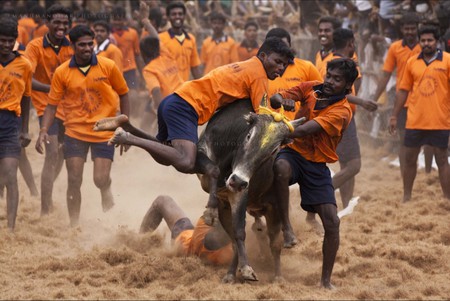 A glass of Jil Jil Jigarthanda, the Madurai special cool drink, can calm and cool your entire system from head to toe after a hot day and rejuvenate you. The preparation involves mixing chilled milk, sugar, homemade ice cream and basundi with badam pisin (an edible gum from the almond tree) and nannari (concentrated extract of sarsaparilla herb which is a wonder herb which cools down the body) syrup. The result is topped with almond chips and crushed resin. Some say it arrived with the Mughals, while others say the Muslim settlers from Hyderabad brought it with them.

Visit Thiruparankundram, the Abode of Murugan

Thiruparankundram is a suburb in Madurai district just 9km from Madurai city centre. The place is known for its harmoniously coexisting Muslim and Hindu communities. Thiruparankundram Dargah atop the hill is the tomb of the prominent Islamic saint Sultan Sikandhar Badushah Shaheed which is visited by people from across Tamil Nadu and neighbouring states irrespective of religion. Thiruparankundram Murugan Temple, built in rock-cut architecture is believed to have been built by the Pandyas, and is one of the six abodes of Lord Murugan. 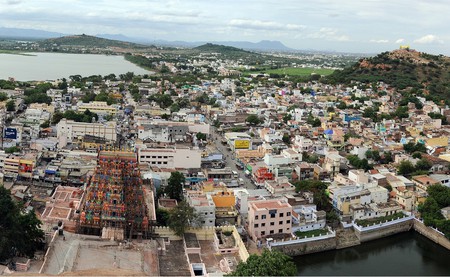 The view from atop Thirupparankundram hill | © Pratyeka / WikiCommons

The famous Amma Mess started as a nameless roadside eatery with only a handful of regular customers. But their trials with local ingredients dished out some of the most incredible meat dishes that enticed every foodie, spreading their fame far and wide and growing their follower base. Today, Manickam and his wife, lovingly called Amma Thai by their patrons, have successfully expanded their kitchen to two outlets and are spreading their ingenious recipes. Some of the must try dishes from Amma Mess are Bone-Marrow Omelette which is their trademark dish, Ayira Meen Kulambu (a type of fish curry), Mudhal Mariyadai Meen Kulambu (a type of fish curry named after the 1985 Tamil film Mudhal Mariyadai), and Kalli Kattu Koli Choru (a type of chicken curry).

Other visit-worthy places in Madurai

Madurai attracts you with her inter-religious culture and cuisine and is well worth a week of your time where you can experience village life strolling through the various streets; discover unique temple rituals like offering clay dolls to the deity; witness the legacy of Chola dynasty through Ambalakarars and more. While you are here, also visit Pazhamudhir Solai – a temple for Lord Karthikeya tucked in a jungle, Gorippalayam Dargah – with an amazing dome of 70 ft. diameter made out of a single stone, St Mary’s Cathedral, and Vandiyur Mari-Amman Teppakulam – a temple in the middle of a man-made pond. 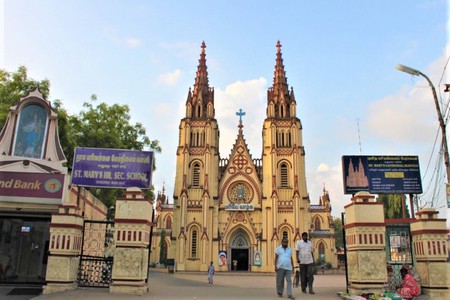