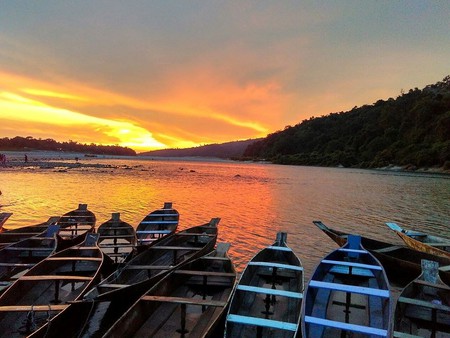 India’s Seven Sister States comprises Assam, Arunachal Pradesh, Nagaland, Mizoram, Manipur, Meghalaya and Tripura, each beautiful in their own right. Even though these states as a whole occupy just seven percent of the country’s total geographical area, but their stunning landscapes, a wealth of cultural and adventure offerings, and incredible natural scenery make it a must-visit destination.

Explore one of the world’s largest river islands

Avid cultural enthusiast and nature lover? Then Majuli Island, nestled on the pristine waters of Brahmaputra River is your destination. Though the island is submerged in water due to flood and soil erosion, its lush greenery, diverse flora and fauna, friendly tribal inhabitants and vibrant culture makes it a must-visit place. Visitors can get an insight into the local tribal culture by exploring the many monasteries (satras), and indulging in village activities, like pottery making, mask-making and farming, which is the major source of livelihood. For bird lovers, this island is a haven as it’s home to incredible biodiversity. Hire a boat and pass the day floating around the mighty Brahmaputra, observing a plethora of migratory birds. 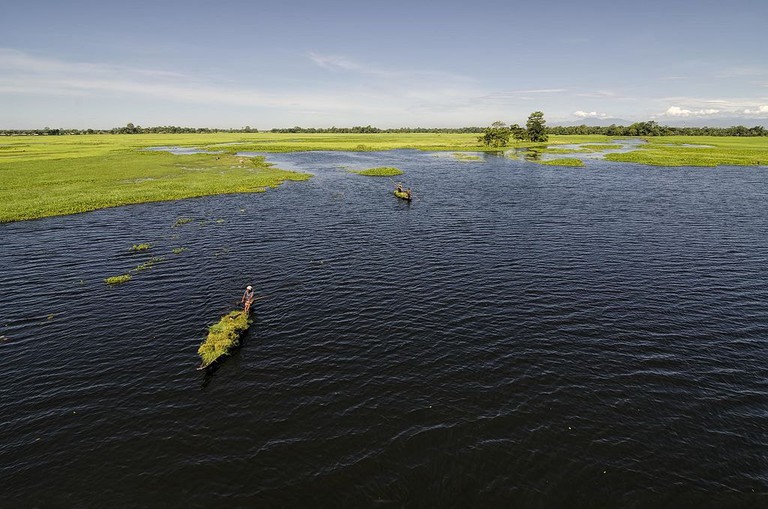 Located in the Bishnupur district of Manipur, the Loktak Lake is the only floating lake in the world. It has a lot of organic matter and vegetation, known as Phumdis, that gives it a floating appearance. You can take a boat trip along the lake, soak in the natural beauty and get up-close with the diverse flora and fauna at the Keibul Lamjao National Park (world’s only floating national park). The park houses 57 water bird species, 233 aquatic plant species and 425 animal species. 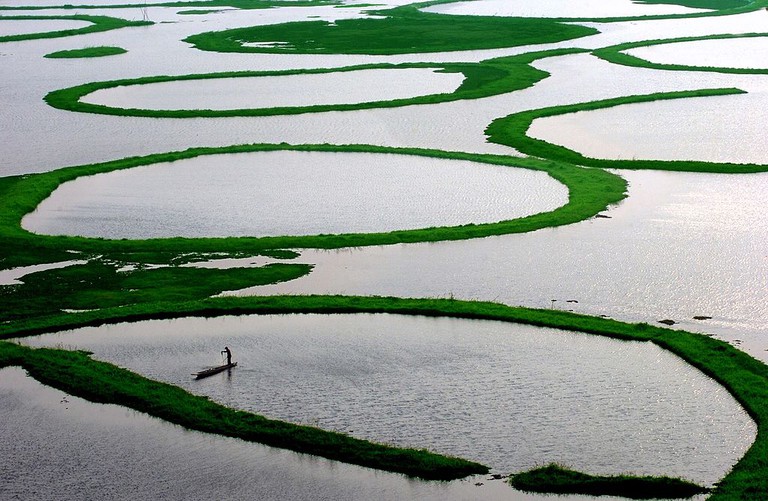 Walk or camp under the Living Root Bridges

Nature, man and time have done their job in building amazing living root bridges in Meghalaya’s West Jaintia and East Khasi Hills district. These bridges are formed by roots of thick rubber trees, further manipulated by inhabitants by bonding these roots to the betul nut plant trunks to create what are now called living root bridges. They take about 15-20 years to get stronger, and have a life span of more than 500 years. You can walk on these bridges, and for those seeking a more unique experience, you can camp under them. 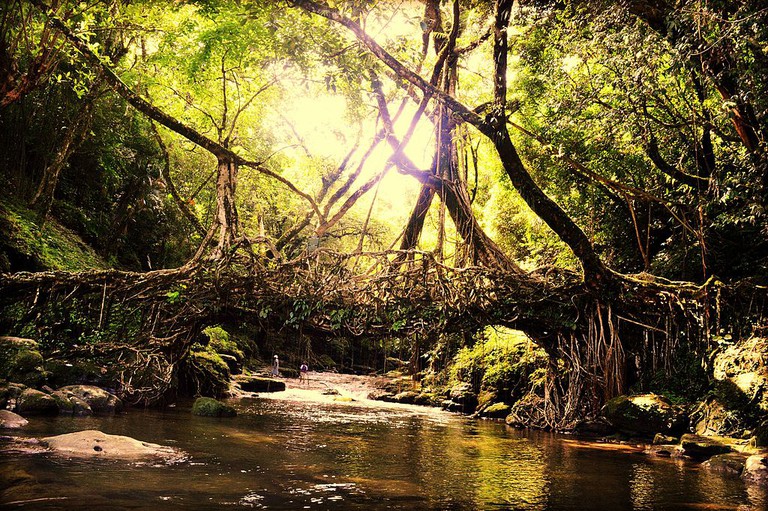 The Jaintia hills, Garo hills and Khasi hills districts of Meghalaya are home to nearly 1,580 caves, and some of them are among the longest in the world. From basic to complicated networks of passages, there are caverns of all difficulty levels. The must-explore include the Krem Liat Prah (Jaintia hills), which is the longest cavern stretching 30,957 meters; Siju Caves (Garo hills) and Mawsmai Cave (Cherrapunji in the East Khasi hills district). These caverns are famed for their spectacular rock formations and looming stalactite and stalagmite formations. When exploring these fascinating labyrinths, do keep in mind the narrow passages on the lead up. 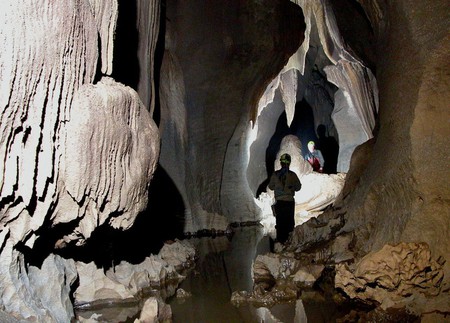 Marvel at the beauty of the Himalayas at Sela Pass

Set at an altitude of 4,170 meters, Sela Pass is the stunning mountain pass holding great geographical importance – as it’s the only road that connects the Buddhist town of Tawang to the rest of the country. This road lies makes for a great spot to stop and marvel at the breathtakingly beautiful vistas of snow-laden Himalayan ranges and frozen Sela Lake that is located near the summit of the trail. The pass is open year-round, however, during winter season, it’s closed sometimes due to heavy snowfall. 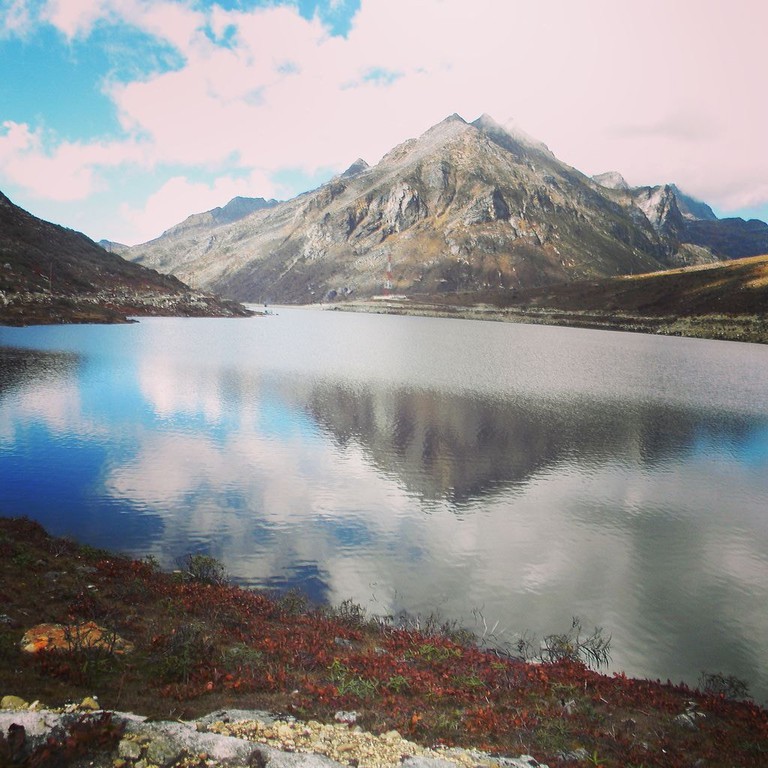 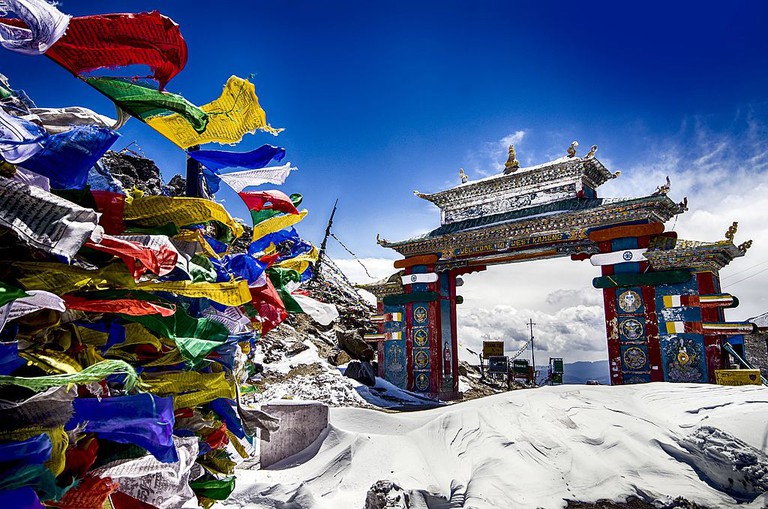 Trek and camp at Dzukou Valley and Japfu Peak

Looking for a bit of adventure, head to Nagaland that boasts one of the highest peaks of the town – the Japfu Peak at an elevation of 3,000 meters. Also, it hosts one of the most scenic valleys – the Dzukou Valley, known for its beautiful species of flowers, especially the rare Dzukou Lily. The trek begins in the town of Kohima, and ventures into the Dzukou trekker’s hut where you can stay for a day and explore the stunning Dzukou Valley – characterized by rolling meadows, vast swathes of grassland and blooming flowers. Then, follow the trail to Vishwema Village and further to Japfu Peak. This six-day trek can be attempted by novice and seasoned trekkers alike, and passes through amazing views. Remember to pack food and top up your water bottles from the trekker’s hut as there are no places en-route to buy these provisions.

Embark on a river rafting excursion

This one is for all adrenaline junkies looking for more than just a ride down the river. There are two popular rivers in Arunachal Pradesh, where you can enjoy white water rafting – Siang River and Subansiri. Both are teeming with category III and IV rapids, which makes them challenging so it’s advisable to book a rafting operator that is available near these rivers.

While paddling down these raging rivers, you’ll be surrounded by emerald green forests. This is a spectacular way of experiencing the forests while having a thrilling adventure. You can also indulge in angling and kayaking in these rivers. 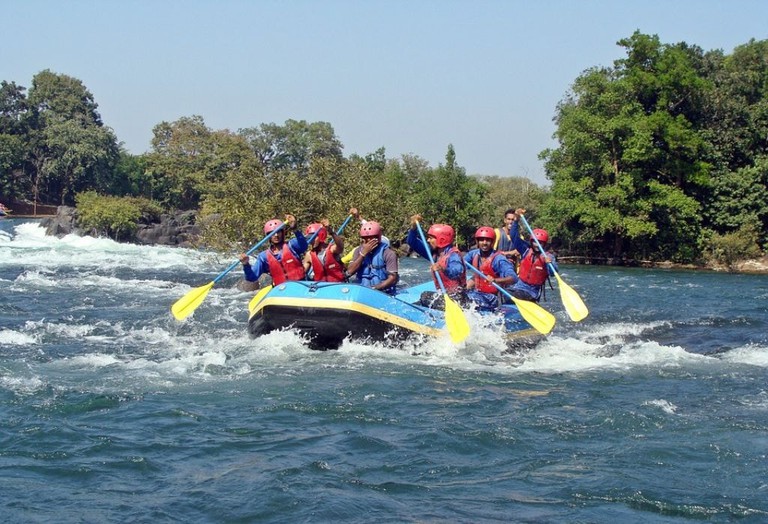 At an elevation of 6,488 meters, the Gori Chen Peak is the Arunachal Pradesh’s highest peak. You should be an experienced climber to reach the summit. The complete circuit takes around 15-20 days, starting from Jang and ending at Tawang. This trekking route passes through vast green fields, pristine lakes and forests, and offers unbeatable views of the majestic mountains that encircle the area. There are several spots along the way where you can pitch camp and rest. The best time for the climb is April-May; October-November. 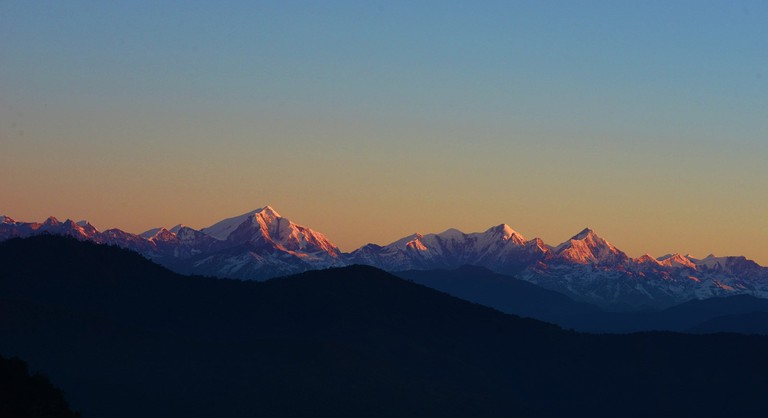 Located in Tripura, Unakoti hill is famed for its huge rock-cut and stone sculptures that have been carved out from the hillside and date back to several centuries ago. Carvings include images of Ganesha, Lord Shiva, Maa Durga and Nandi bulls. Besides these beautiful rock carvings, there are a few waterfalls near the hill to explore. 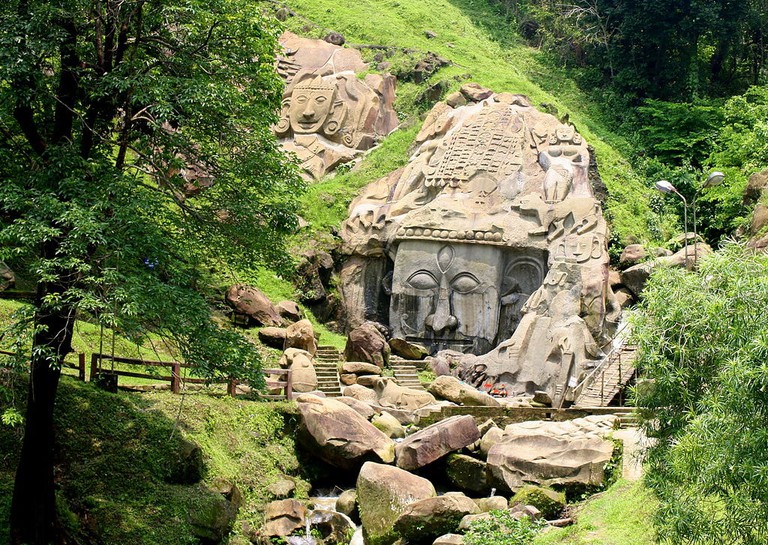 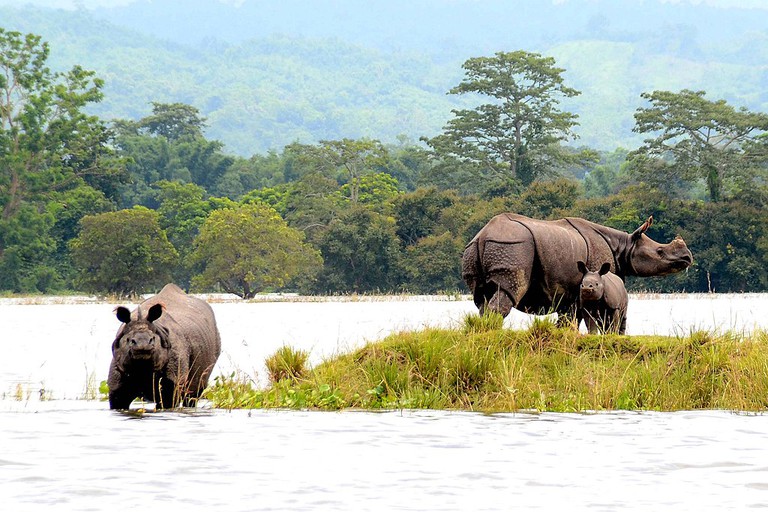 Rhinos at Kaziranga National Park | © Diganta Talukdar / Wikimedia Commons
Declared as a World Heritage Site, the Kaziranga National Park is home to two-thirds of the total one-horned rhino population on earth. More than 250 species of migratory birds and 35 species of mammal call this park home, which is also the natural habitat of protected wild species of tigers, elephants, swamp deer and wild water buffalo.
Open In Google Maps
Kanchanjuri, Assam, 784177, India
Visit Website
Give us feedback

Stand wonderstruck in the Neermahal

Translating to ‘Water Palace’, the Neermahal is located in the middle of the Rudrasagar lake in Tripura, and is one of two water palaces in the country. Take a tour of this palace that provides an insight into royal life of the erstwhile kings who ruled the area. A striking feature is the architecture, which is a wonderful synthesis of Muslim and Hindu styles.

Explore the tea plantations in Assam

Assam is the largest tea producer in the country, with tea plantations spread over a massive mountainous terrain. So of course, no visit to India’s Seven Sister States is complete without exploring these picturesque tea plantations, as well as sampling the region’s unique Assam tea. The must-visit region is Jorhat, which is referred as the ‘Tea Capital of the World’. There are a plethora of stay options amidst the tea estates, including Banyan Grove on Gatoonga Tea Estate and Wild Mahseer on Addabarie Tea Estate, etc. 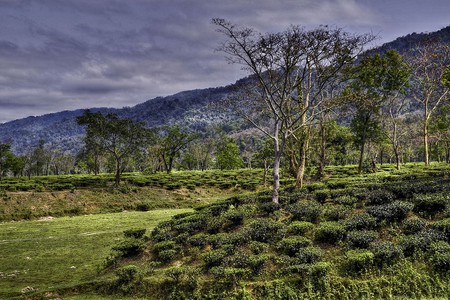 Visit the waterfalls in Meghalaya

Meghalaya is home to a myriad of waterfalls, each with their own unique characteristics. Nestled between nature trails and lush greenery, the most exciting and spectacular waterfalls in the state include the Elephant Falls in Shillong, Nohkalikai Falls in Cherrapunji (highest plunge waterfall in India), and the Nohsngithiang Falls, which is a seven-segmented fall, hence also known as Seven Sisters Waterfall. 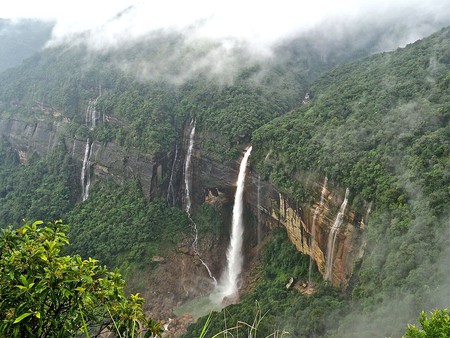 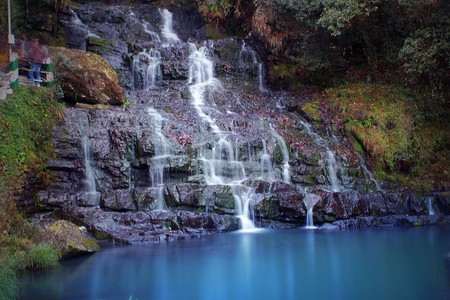 A nature-filled hill town nestled at an elevation of 1,619 meters in Aizwal district of Mizoram, Hmuifang is an example of unblemished natural beauty. There are many trails in this hill town, each as spectacular as the next, and can be explored by mountain biking or hiking, which is, in fact the most popular activity in the area. These trails are suitable for both novices and pros. Some of the popular ones include Trail Sialsuk, Baktawng and Lungleng trail. Enjoy the local flora and fauna while biking.

The mighty Brahmaputra River is the biggest river in North-East India and the most spectacular waterway. Visitors can take a Brahmaputra River Cruise that begins from Dibrugarh and passes through several attractions and viewpoints, like Majuli, Jorhat, Nameri National Park, Kaziranga National Park and concludes at Guwahati. Five, eight or 11-day cruises are on offer, from April until October. Some of the popular cruise operators include – M.V. Mahabaahu, Brahmaputra Cruise Pvt. Ltd. and Alfresco Cruises, Brahmaputra Lake.

Seven Sister States are inhabited by numerous tribes, and each has their own beliefs, traditions and festivals. Some of the popular festivals to attend include Bihu (the harvest festival of Assam), Cheiraoba (celebration of New Year in Manipur), Ziro Festival of Music (four-day long music festival in Ziro Valley, Arunachal Pradesh) and Hornbill Festival (a 10-day affair to promote the Naga culture and traditions; held in Kohima). 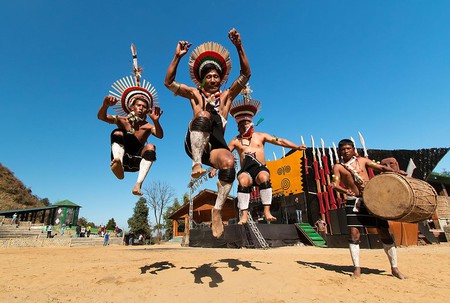 Point to note: Though most regions in India’s Seven Sister States are freely accessible, there are certain parts where both Indian and foreign nationals require a permit in order to enter. Indian citizens need to obtain an Inner Line Permit, while foreigners need to obtain Restricted Area Permit / Protected Area Permit. To find out more about these entry formalities and how to obtain the permit, click here.