A vendor making fried fish at a stall in Chennai's Marina Beach
No culinary experience in Chennai is complete without trying some of the city’s popular street food specialties at its best-known food markets. But unlike five-star hotels and fancy restaurants, figuring out where to go to get the best street food experience can be challenging if you’re not familiar with the city. So if you’re ready to go hunting for street food in Chennai, here are some of the best markets that should be on your list.

As far as Chennai’s vegetarian street food is concerned, there is no better area to visit than the streets that surround the popular Kapaleeswarar Temple in Mylapore. The temple’s evening prasadam (or religious offerings) such as puliyodharai (tamarind rice) or curd rice are considered a delicacy and are popular among devotees. However, once you step out of the complex, there are dozens of popular stalls selling all kinds of street food ranging from the popular idli/dosa to traditional sweets and savouries. Whether you head to popular stalls such as Jannal Kadai (Window Shop) for some hot pongal or stop by the hole-in-the-wall Kalathi News Mart for some frothing rose milk, you’ll never run out of options here. 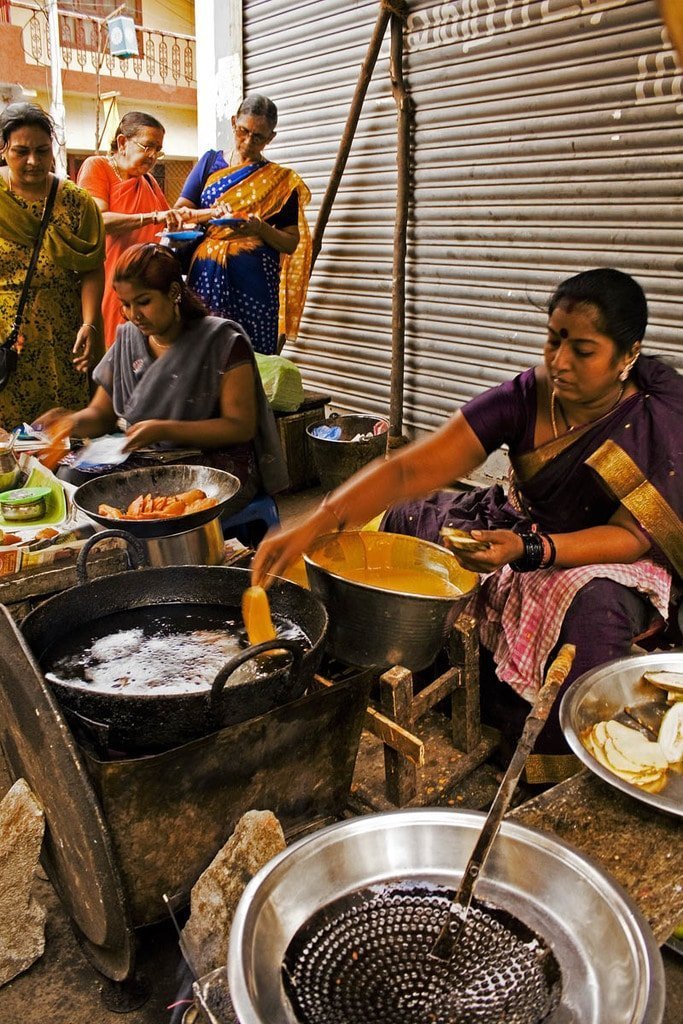 There is no culinary experience that is more symbolic of Chennai than eating a freshly fried plate of bhajjis with chutney at the Marina Beach. Bhajji are made with an assortment of vegetables such as chilli peppers, onions or potatoes that are sliced, dipped in lentil flour and fried in oil, and are a popular snack in Chennai. If you’re in the mood for some meat, try fried fish, usually made with the day’s fresh catch. While the beaches at Marina and Besant Nagar are filled with dozens of stalls selling bhajjis and fried fish,they are also popular for other street food items such as roasted corn-on-the-cob. In any case, eating bhajjis by the beach in Chennai is not a food experience, but rather a ritual that is not to be missed! 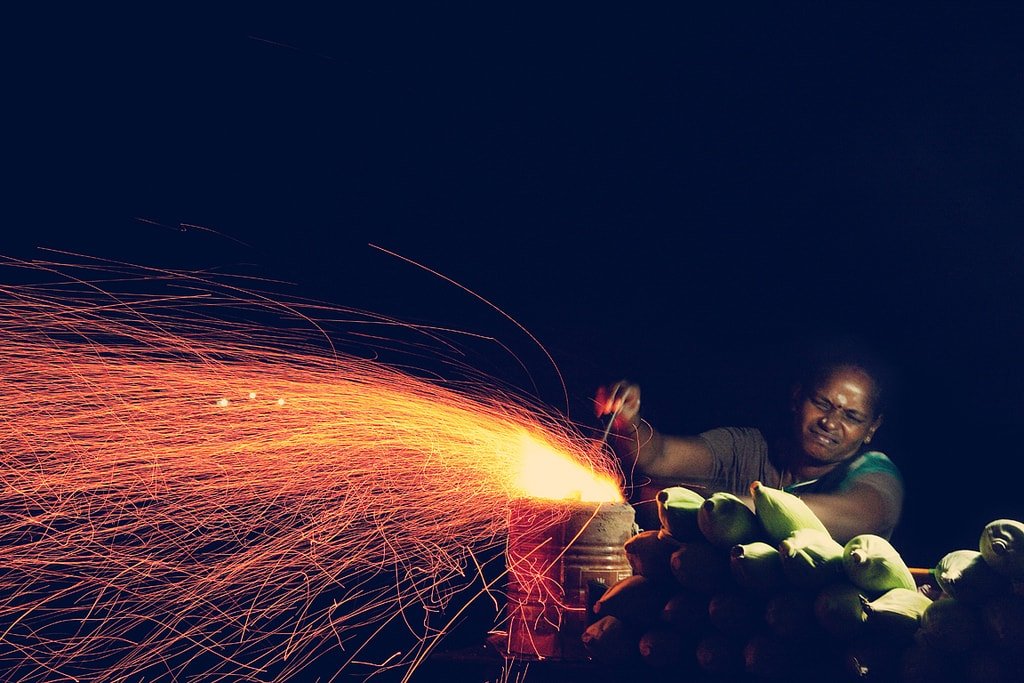 The only other place in T Nagar that draws as many customers as its popular shopping district is the street food market at Srinivasa Road. The market is usually buzzing in the evening with several shops selling various street food to shoppers and office-workers who drop by in large numbers to grab a quick bite. Specialties include popular dishes such as kingfish fry, chicken fry, kothu parotta (shredded roti)and kal (stone) dosa (crèpe-style pancakes). 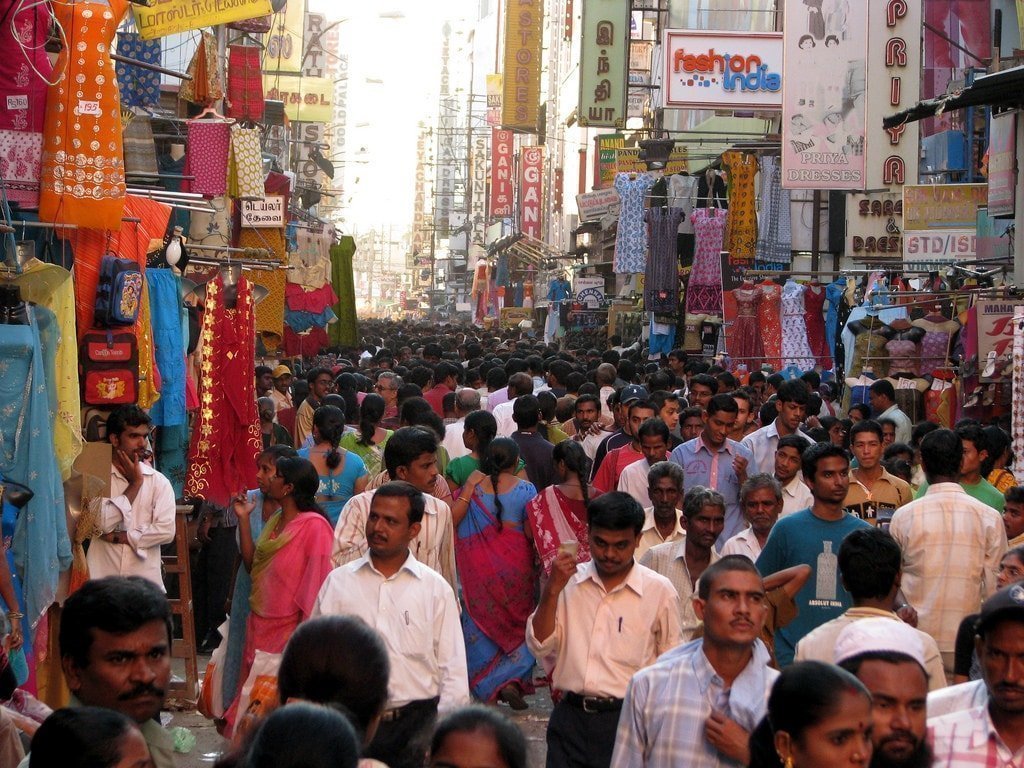 Heavy crowds at the market and shopping district in T Nagar, Chennai | ©McKaySavage/Flickr

Best known for its vibrant Hindi-speaking population and culture, Sowcarpet is one of Chennai’s best destinations for trying out North-Indian food specialties. Of particular note is the street food market on Mint Street which is famous for its numerous sweet and savoury stalls serving hot jalebis (sweet fried batter)and samosas (crispy meat- or vegetable-filled snack) and chaat stalls with items such as pani puri (savoury crispy snack).

Market, Farmers' Market, Indian, Vegetarian, Fast Food, Street Food
While it isn’t a street food market in any sense of the word, there are nearly a dozen Burmese street food stalls in Second Lane Beach Road and around Burma Bazaar in Chennai. However, these few stalls are famous enough in to pull more crowds than most eat streets on their own! Some of these age-old unnamed stalls have served authentic Burmese cuisine for over three decades and are remnants of a past when Chennai had deep ties with Burma. While cuisines such as Burmese are often restricted to fancy restaurants in Chennai, at these stalls, you can get authentic dishes such as khow suey (noodle dish) or mohinga (rice noodle and fish soup) for a little more than Rs.50!
More Info
Open In Google Maps
Rajaji Road, Chennai Port Trust Chennai, Tamil Nadu, 600001, India

The Koyembedu Bus Terminus is Chennai’s biggest transit point and draws thousands of commuters on a daily basis. So it is only natural that the area both inside and outside the terminus is dotted with numerous street food stalls that dish out a variety of fast food items ranging from South and North Indian to even Chinese. However, the most prominent specialty of this street food market is South Indian tiffin items such as idli, dosa, and vada. 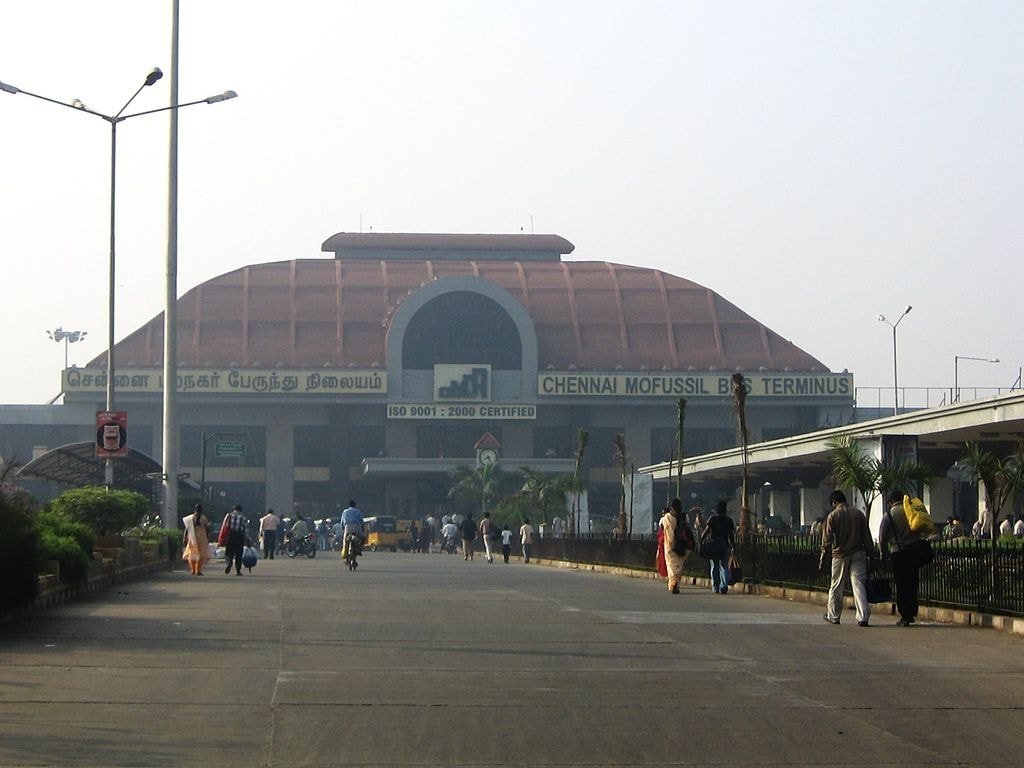 When it comes to delicacies such as biryani, haleem or Mughlai varieties, there is no better street-food destination in Chennai than the thoroughfares surrounding the famous Periamet Mosque. This area particularly lights up during the lead up to Ramadan when street food vendors from as far away as Mumbai, Delhi and Hyderabad come to set up stalls here. Of particular note are specialty dishes such as chicken biryani, mutton haleem, gosht korma, and nombu kanji (nutritious gruel). 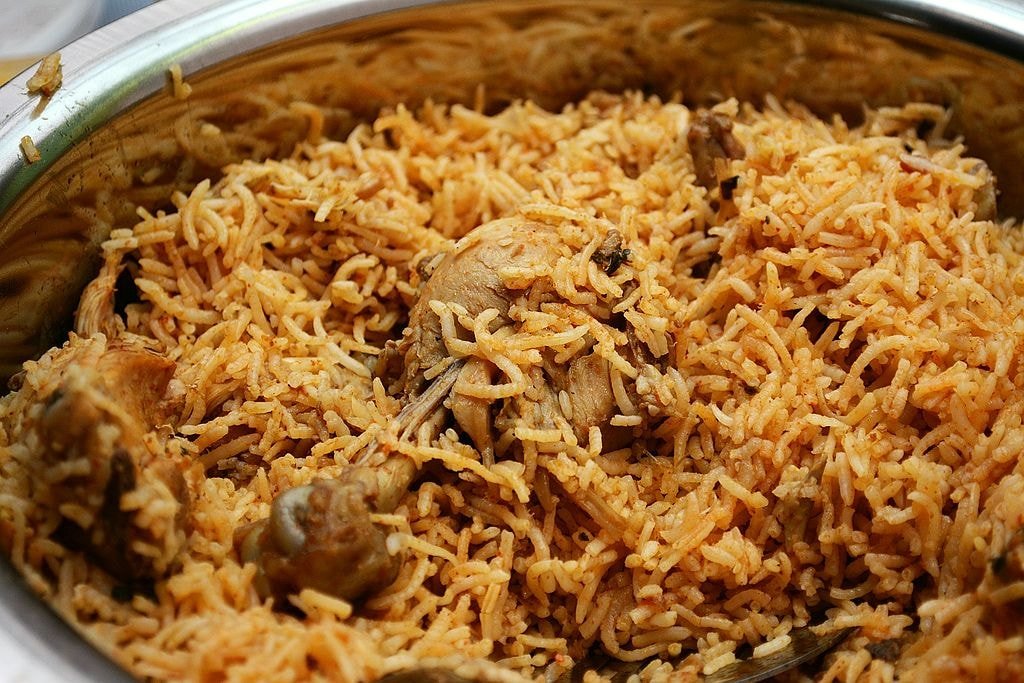