The Best Museums to Visit in Bangalore

Government Museum | © Bikashrd / Wikimedia Commons
Bangalore has a mélange of interesting museums that stand as witnesses to the city’s rich past and present. From art and history to archaeology, philately, science and technology, discover the best museums to visit in India’s Silicon Valley.

Museum
Established in 2011, the Kempegowda Museum is dedicated to the founder of Bengaluru, Kempegowda. The museum has a rich collection of paintings that depict the story of the city’s past, along with posters of temples, forts, water reservoirs, inscriptions and historical artifacts dating from the 16th century onward. There is also a statue of Kempegowda in the center of the hall. The highlight of the museum is its floor that is covered in the 19th century Bangalore heritage map. A visit to this museum will provide a better understanding of Bangalore’s past.
More Info
Open In Google Maps
Field Marshal Cariappa Road, Shanthala Nagar, Ashok Nagar Bengaluru, Karnataka, 560001, India

The Government Museum is one of the oldest museums in the country, established in 1865. Spread over two floors, it is split up into 18 galleries dedicated to archaeological and geological artifacts, including inscriptions, coins, terracotta, 84 sculptures from different periods, Neolithic pottery, 70 paintings from various ancient kingdoms (including the Tanjore, the Deccan and Mysore) and several other artifacts that date back 5000 years. Besides, visitors can also see the oldest known Kannada language inscription from 450 CE, called the Halmidi inscription. The building itself exudes the charm of a bygone era, with neo-classical architecture. 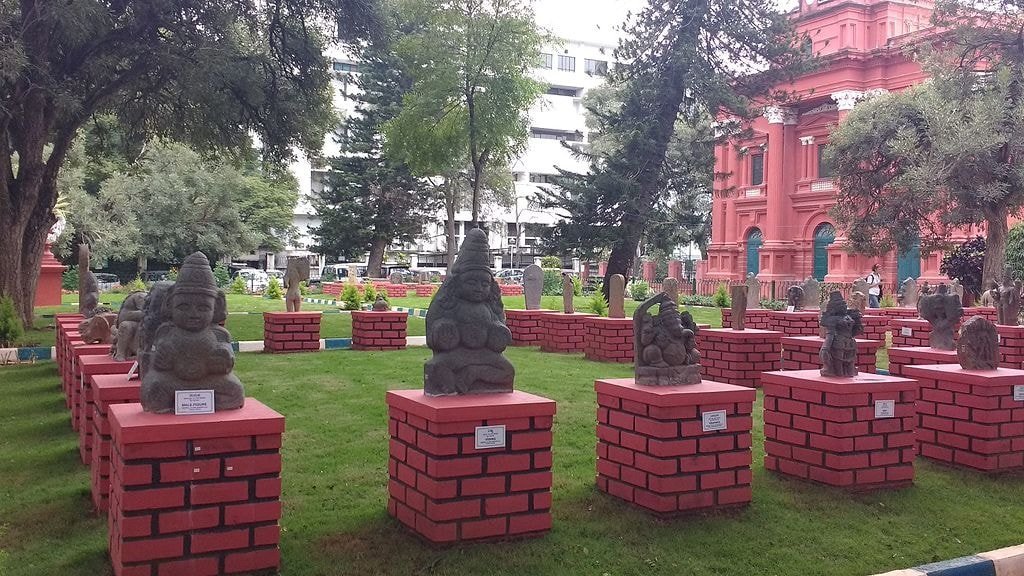 Museum
Satellite models at the museum | © Amanjosan2008/Wikimedia Commons
Found just a stone’s throw away from the Government museum, the Visvesvaraya Industrial and Technological Museum is divided into several exhibition galleries that explore the science of fluids, sounds and optics, fundamentals of machines, engines, principles of electricity, biotechnology and its applications, space and dinosaurs. The museum has a special children’s gallery with interesting scientific exhibits to help them learn about science through play. It also houses travelling exhibitions that offer insight into the latest scientific innovations and trends. Besides, there is a science show hall, an auditorium with a capacity of 250, a 3D theatre and a telemedicine facility. Activities, including a sky observation programme, Taramandal show, science lectures and science demonstration shows are held throughout the year.
More Info
Open In Google Maps
Kasturba Road, Ambedkar Veedhi Bengaluru, Karnataka, 560001, India
+918022866200
Visit website

This museum is dedicated to the Father of the Nation, Mahatma Gandhi. It features a picture gallery that showcases the life and times of Gandhiji, including his teachings and freedom struggle. Visitors can learn about Gandhiji’s entire life, from childhood to his last days, at this museum. The walls of the museum are adorned with the quotes of Gandhiji.

Museum, Historical Landmark
Jet Fighter at HAL Aerospace Museum | © Arunram / Wikimedia Commons
Run by HAL (Hindustan Aeronautical Limited), one of the key players in the Aerospace sector in Asia, the HAL Heritage Center and Aerospace Museum documents the history and growth of the Indian Aviation industry. The museum’s collection includes helicopters, aircraft, fighter planes, a flight simulator and a mock Air Traffic control tower. Visitors can learn about the airplanes, and gain insight into the landing and take-off mechanisms. For anyone with an interest in aircraft, this is a must-see museum when in the Silicon Valley of India.
More Info
Open In Google Maps
HAL Old Airport Road, HAL GB Quaters, Marathahalli Bengaluru, Karnataka, 560037, India
+918022318341

Museum
Indian Museum, Kolkata | © WikiCommons
Housed in the National Institute of Health and Neurosciences, the NIMHANS Brain Museum is one of a kind in the city, where nearly 600 brain specimens are on display. From animal to human brains, you’ll find it all in the bottles and jars up on their shelves. Brains with diseases like Cerebral Palsy, Alzheimer’s, Schizophrenia, along with brains of accident victims and other damaged brains are also on display. Visitors can learn about the working of the brain, and can see the internal structure of the brain first-hand.
More Info
Open In Google Maps
Hosur Main Road, Sattar Layout, Lakkasandra, Laljinagar, Wilson Garden Bengaluru, Karnataka, 560029, India
+918026563357
Visit website

Situated on the first floor of the General Post Office of Bangalore, the Philatelic Museum is a repository of rare stamps from different periods, countries, shapes and sizes. About 600 magazines and books on philately and Indian postal paraphernalia are on display. The museum documents the past and present of Indian post and the development of stamps.

Forest, Park
Artifacts at Janapada Loka | © Cherishsantosh/Wikimedia Commons
Karnataka’s diverse folk life is recreated at this 15-acre open-air museum that is located by the Bangalore-Mysore highway. About 5,000 folk artifacts are on display in the museum that showcases the folk lifestyle, literature, sculpture, festivals, dance and music. The folk music is played in the background at all times in the museum, along with folk dance video recordings. Exhibits include articles and equipment used during everyday lives in the past, like utensils, agricultural tools, manual grinding stones, etc. There are also costumes, masks, 500 year-old shadow puppets, musical instruments, weapons and other artifacts.
More Info
Open In Google Maps
Doddamannugudde Forest, Karnataka, 562159, India
+918023605033
Visit website