The Best Indian Waterfalls To Check Out This Monsoon 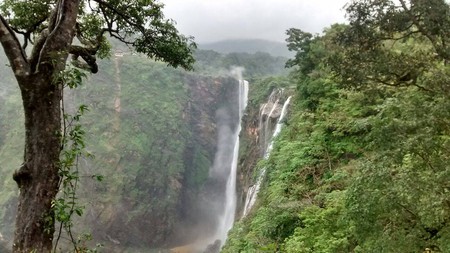 India is blessed with an amazing abundance of rivers. In monsoon, these rivers are in their full glory, carrying the surplus water from the upper reaches of the hills through the valleys and plains before finally meeting the ocean. Many of them host magnificently scenic and beautiful waterfalls where water cascades from a great height to gush down depths, making a huge spectacle with great fury, noise, and mist. Monsoons are the best season to behold these natural beauties and their aqua-acrobatics. There are falls in India which can give Niagara Falls a run for their money. Here is a list of the top waterfalls in India, classified by region.

In the north and northeast where the rivers are most fearsome, jumping down from great cliffs and heights, you find waterfalls powering some of the largest Hydel projects that light up the region.

Meghalaya, which holds the reputation of having the ‘wettest place on Earth,’ is home to the fearsome Nohkalikai Falls, one of the tallest in India at 1,100 feet. Jang Falls in Arunachal is another that feeds the Hydel power plant nearby year-round. These falls can be tourist destinations year-round thanks to the continuous rainfall. The East and West Khasi hills are home to mighty falls like Keynrem, Langshiang, Nohkalikai, and Nohsngithiang.

While Himachal Pradesh is home to famed falls like Chadwick and Rahala, Tattapani on the Sutlej River deserves a special mention because there is a hot water sulphur spring that cascades down the fall.

Who would have thought that the arid, desert-like terrain of Rajasthan would host a fall too? But with Bhimlat Falls, the driest state in India shows that it’s not barren in this department. 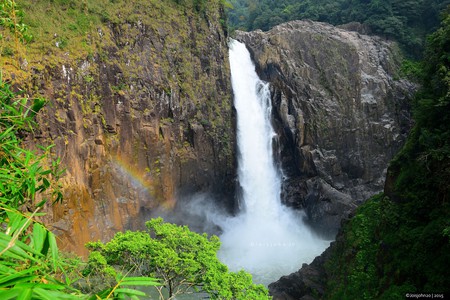 In the east, Odisha has the mighty beautiful Barehipani Falls inside Simlipal Forests in Mayurbhanj, the second highest in India at 1,309 feet. The falls are nestled within pristine forests and mountainous terrain, adding to the scenery. Joranda and Khandadhar are also major falls in the state. 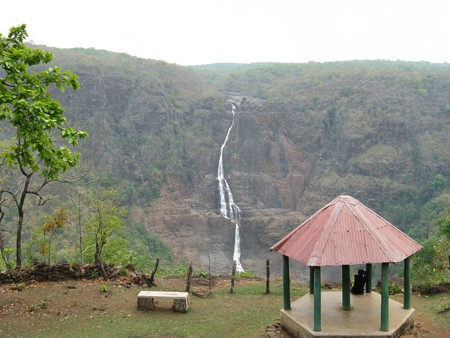 In the west, there are a few famous falls like Doodhsagar, which etymologically means ‘The Ocean of Milk.’ When the springs cascade down 1,020 feet at Mollem, Goa, it looks exactly like a fountain of milk. Before Konkan Railways was built, passengers between Mumbai and Goa could take in its exquisite beauty as the Kolhapur-Margao meter gauge route ran alongside it. Some have fond memories of the experience.

‘In the cold of the morning, sometime between 7 and 8 am, my dad would faithfully wake us to watch the Doodhsagar Falls glide and gush in the distance, as our meter gauge train chugged its way towards Goa,‘ remembers Reena Martins, a journalist from Mumbai. ‘After gently coaxing us out of our blankets, he’d take us to the window, and we’d try to stick our heads between the bars. To a kid’s bleary eyes, this was pure magic. Water turning into milk, and how!‘ 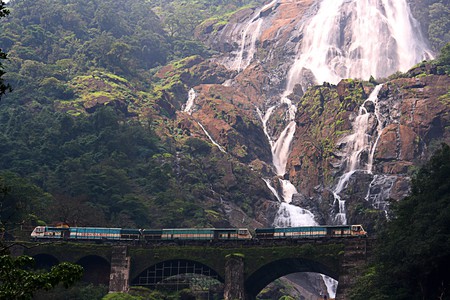 Down south, Karnataka takes the crown for ‘State of Waterfalls in India,’ maybe because her virgin forests remain largely unspoilt, and fountains remain sufficiently rejuvenated to sustain the waterfalls. Shivasamudram is noted for its sheer volume: during monsoons, it discharges 19 million litres per second. Jog Falls, another popular tourist destination, span a large cliffside of about three kilometres, gurgling down 829 feet. Three distinct falls, Raja, Roarer, and Rocket, constitute it. Iruppu Falls in Coorg is considered auspicious to take a bath in by believers of Shiva.

Kerala is incredibly beautiful during monsoons, and so are its waterfalls. Athirapally Falls in Thrissur district leads the pack, followed by many others like Barkana, Meenmutty, and Kunchikal.

Tamilnadu is famous for Hogenakkal Falls, unofficially called ‘Niagra of India.’ A bath here is curative, people believe. Thalaiyar Falls in Dindigul is another. 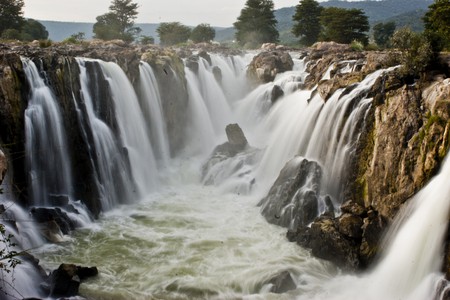