Mysore Palace | © Spiros Vathis / Flickr
India’s wealthy trove of cultural heritage, history and architecture makes it a fascinating tourist destination. And, the glory of its rich past is still alive and cherished in the form of beautiful palaces that were created by the erstwhile Maharajas, Kings and Nizams, who once lived here. Discover the most stunning royal palaces in India that provide an unprecedented glimpse into the opulent era as well as the social and cultural facets of the regal life.

Historical Landmark
Mysore Palace | © Jim Ankan Deka / Wikimedia Comhttps://commons.wikimedia.org/wiki/File:Mysore_Palace,_India_(photo_-_Jim_Ankan_Deka).jpgmons
A beautiful synthesis of Hindu, Rajput, Muslim and Gothic styles of architecture, the Mysore Palace belongs to the Wodeyars, the royal family of Mysore, and still serves as their official abode. Designed by a British architect and completed in 1912 after 15 years in the making, the palace is remarkably well-maintained and known for its magnificence. It is a three-storey stone palace with two durbar halls, several courtyards, gardens, exquisite buildings, antique dolls pavilion and royal portrait gallery. The complex also features nearly 12 Hindu temples. You are allowed to visit the palace, but not allowed to photograph the inside of the palace. It is open all days, from 10 am until 5:30 pm. Every Sunday, and on public holidays from 7 pm – 7:45 pm, the palace is illuminated with 100,000 lamps and it looks glorious – truly a sight to behold. Visitors can buy the ticket for the palace tour online.
More Info
Open In Google Maps
Sayyaji Rao Road, Agrahara, Chamrajpura Mysuru, Karnataka, 570001, India
+918212421051
Visit website

Perched on Chittar Hill overlooking the blue city of Jodhpur, the Umaid Bhawan Palace was completed in 1943. This grand edifice is cherished for its stunning exterior and interior that features elements of Indo-Saracenic, Western Art Deco and Classical revival architectural styles. Constructed on an area of 26 acres, it is one of the largest private residences in the world, featuring 347 rooms. Currently, it is owned by Maharaja Gaj Singh, and also houses a museum that features stuffed leopards exhibits, classic cars that were used by the Maharajas, a vast collection of clocks in different shapes and sizes, photographs and memorabilia. A part of the palace (about 64 rooms) is converted into the heritage hotel that is managed by Taj Hotels. This palace is a testament to the Indian royal heritage!

Built in the 16th-century, the City Palace is a hilltop palace that offers a panoramic view of Udaipur. With a blend of architectural styles of Mughal and Rajasthani, this majestic structure is nestled along the Aravali ranges and faces the Lake Pichola in the front. It houses an array of palaces, temples and lakes within its complex. The interiors are stunning with delicate mirror-work, wall paintings, murals, intricate marble-work, silver work and an infinity edge pool that stretches along an array of rooms. Today, this edifice is a popular tourist spot, offering an insight into the royal kingdom of the Mewar dynasty. It remains open all week, from 9:30am to 5:30pm. 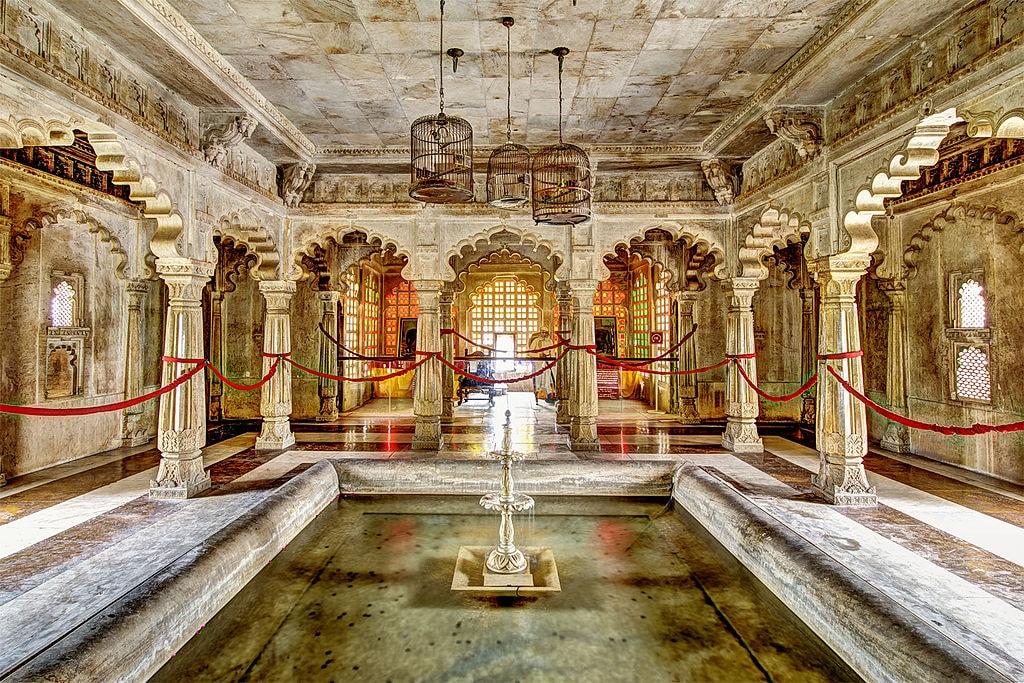 Building, Historical Landmark
Chowmahalla Palace | © prashanth dara / Wikimedia Commons
Literally meaning ‘Four Palaces’, the Chowmahalla Palace was built in the 19th-century and served as the residence of the Nizams of the princely state of Hyderabad. It is split up into two courtyards – southern courtyard that houses four palaces built in the neo-classical architectural style, and the northern courtyard that features a huge corridor of rooms (Bara Imam), along with pool and fountain in the center. The major highlight of the palace is the majestic Durbar Hall, also called Khilwat Mubarak. It was here that all the symbolic and religious events and ceremonies were held. Visitors can explore both courtyards, Durbar Hall, and discover the amalgam of architectural styles, from Mughal to Persian that are entwined in the design of the building. You can visit the palace every day, except Friday and national holidays; from 10 am to 5 pm.
More Info
Open In Google Maps
20-4-236 Motigalli, Khilwat Hyderabad, Telangana, 500002, India
+914024522032
Visit website

Spreading across 28.4 acres, the Jai Vilas Mahal belonged to the Maharaja of Gwalior, Jayajirao Scindia. Established in the 19th-century, this palace is an epitome of European architecture finesse. It is a three-storey structure, all featuring different styles of architecture. The first storey has Tuscan influences, the second is Italian-Doric, and the third floor is of Corinthian architectural style. The main highlight of the palace is the Durbar Hall that features gold furnishings, exquisite chandeliers and huge posh carpets. This royal palace now serves as a museum that features old weaponry, the antiquity of the royal era, historic documents, and other artefacts that offer an insightful glimpse into the history of the region. From April to September, the palace remains open from 10 am to 4:45pm; and from October to March, 10 am to 4:30pm and closed on Wednesdays. 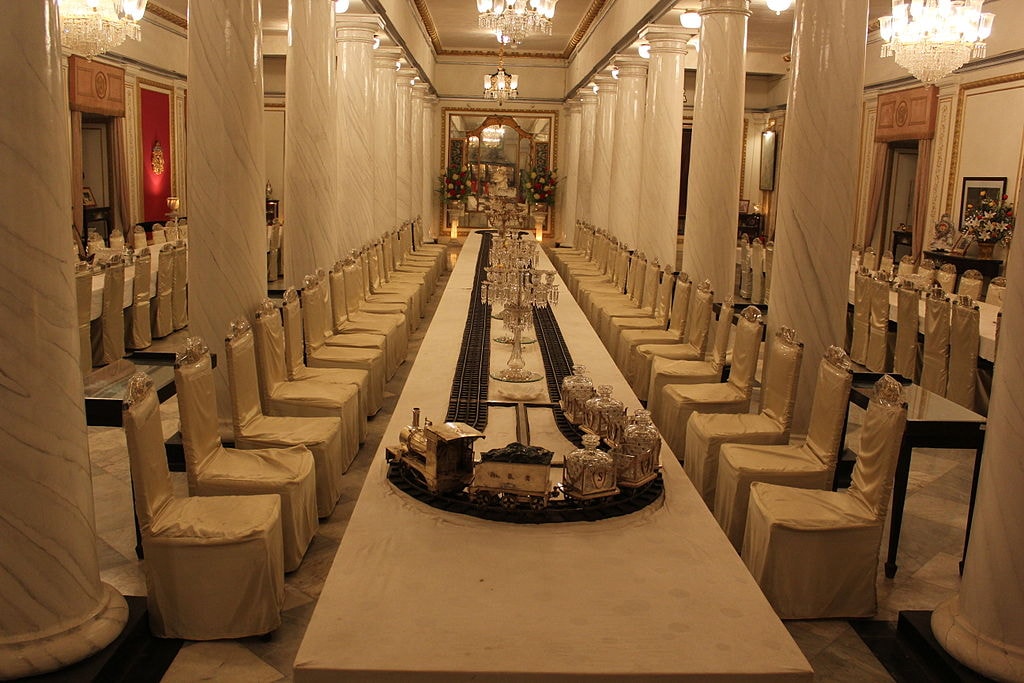 Museum
City Palace | © Clément Bardot / Wikimedia Commons
One of the most treasured palaces in India is the City Palace that was built in 1732 and belonged to the Maharaja of Jaipur, Maharaja Sawai Jai Singh II who ruled the kingdom for 45 years. Several successors ruled the palace and Man Singh II was the last Maharaja to do so. In 1949, the Kingdom of Jaipur merged with the Indian Union, however, the palace remained the residence of the royal family. Combining the architectural styles of European, Rajput and Mughal, this palace features an array of gardens, temples and pavilions. Noteworthy structures include Chandra Mahal, Maharani’s Palace, Mubarak Mahal, Shri Goving Dev temple, Diwan-i-Aam, Diwan-E-Khas, and the City Palace Museum. The striking feature of this palace is its intricately and uniquely designed peacock gateways. Tourists are welcome to explore the opulence of the Jaipur maharajas from Monday to Sunday, 9 am to 5 pm.
More Info
Open In Google Maps
Tulsi Marg, Gangori Bazaar, J.D.A. Market, Kanwar Nagar Jaipur, Rajasthan, 302002, India
+911414088888
Visit website

Historical Landmark, Building
Lukshmi Villas Palace, Vadodara | © Birsa Murmu / WikiCommons
Spread over 500 acres of land, the Laxmi Vilas Palace is said to be the largest private residence, four times the size of the majestic Buckingham Palace in London. It served as the official dwelling of the Gaekwads, the royal family of Vadodara. The royal family lineage of Vadodara continues to live in this palace. Within the complex lies several buildings, including banquet, palaces and a museum that features an eclectic collection of paintings and artefacts from across the world. After exploring the interior, get some refreshing air outside in the lush manicured gardens and indulge in a game of golf at the 10-hole golf course within the compound. This palace remains open from 9:30 am until 5 pm; closed on Monday and public holidays.
More Info
Open In Google Maps
J N Marg, Moti Baug Vadodara, Gujarat, 390001, India
+917227939902

Built in the 18th-century, the Lake Palace is nestled amidst the scenic Lake Pichola. Once served as a winter palace of the royal Mewar dynasty, it is now a luxurious white-marble hotel managed by the Taj Group. It boasts 83 rooms and suites, all beautifully decorated with attention to every detail. It is considered to be among the world’s most romantic and royal hotels – live here to experience the royal taste! A must-do activity is the Rajasthani-style crafted boat ride through the Lake Pichola that takes you through an array of palaces dotting the complex. 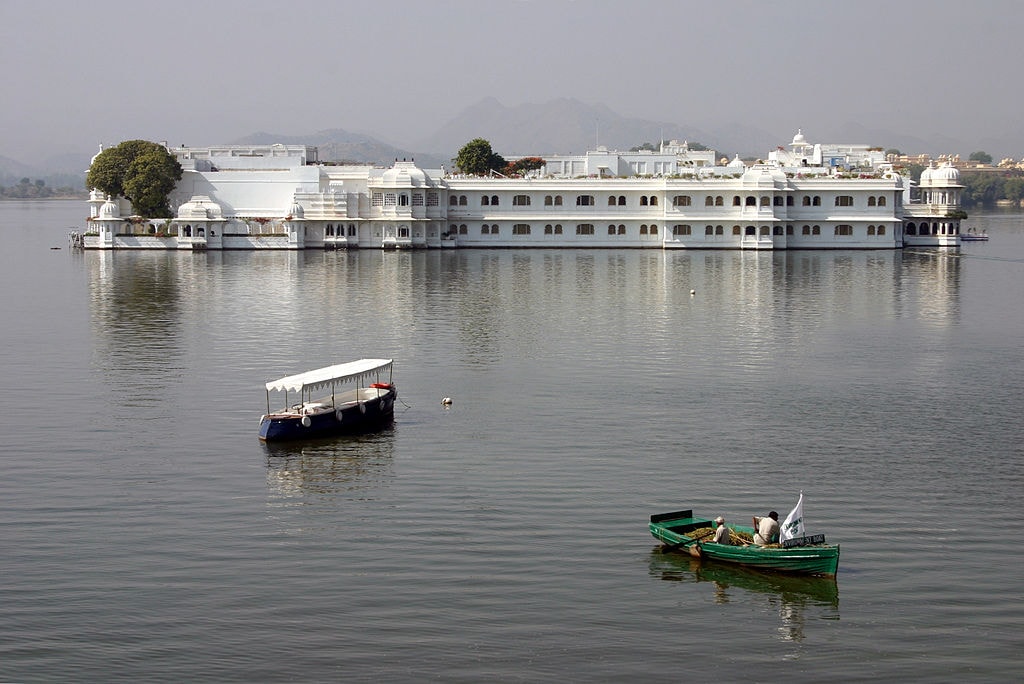 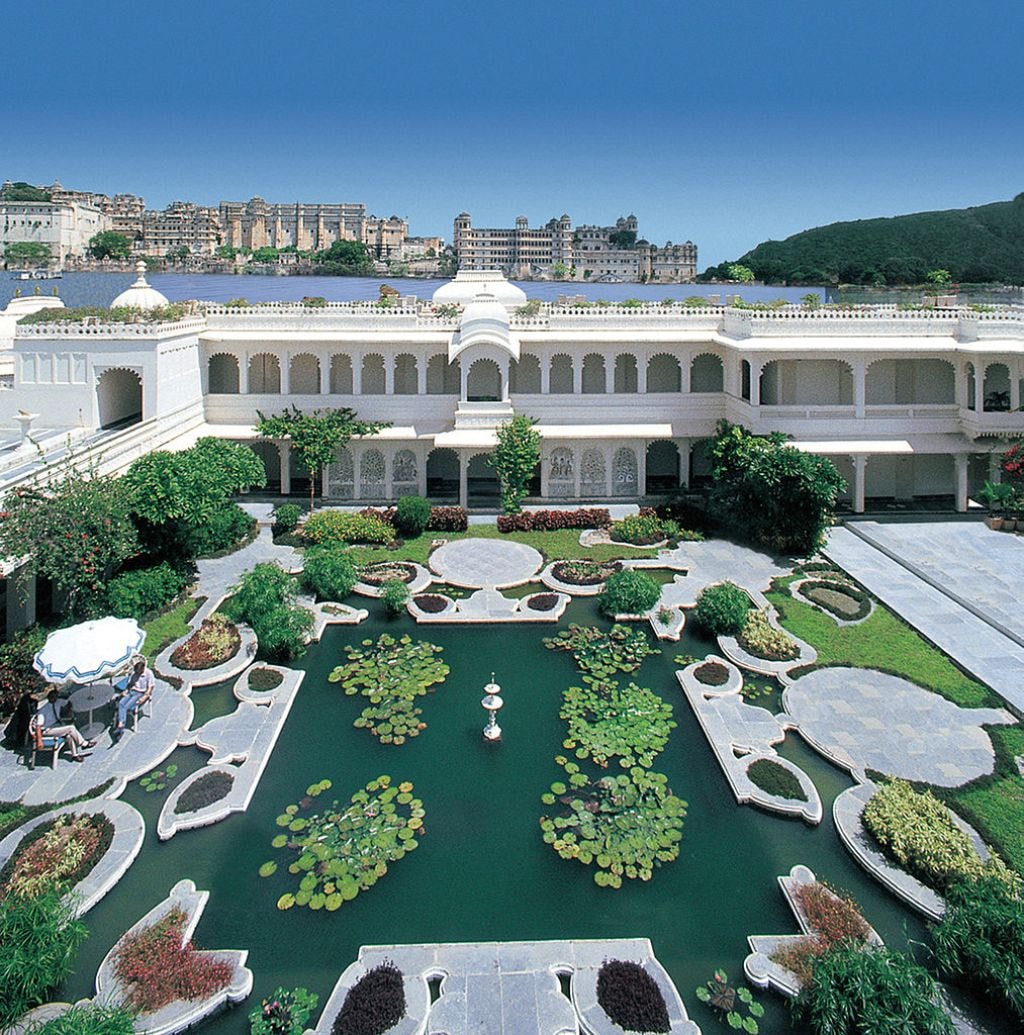 Owned by the Nizam of the princely state of Hyderabad, the Falaknuma Palace was converted into an ultra-luxe hotel in 2010 and managed by the Taj Hotels. It invites guests to experience the grandeur of the Hyderabad Nizams. Perched high atop a 609.6 meters (2,000 feet) hill overlooking the City of Pearls, this hotel is renowned for its eclectic interiors, featuring Venetian chandeliers, roman pillars, marble staircases, intricate statues, artworks and exquisite period furnishings. The Japanese, Mughal and Rajasthani gardens add to its beauty. Impressively, the palace also features a huge library said to house one of the rarest versions of the Islam’s holy book, the Quran.

Served as a royal hunting lodge of the erstwhile Maharaja of Jaipur, the Rambagh Palace was converted into a heritage hotel in 1957. It is managed by the Taj Group. With its beautifully appointed rooms and suites, lush gardens, marbled corridors, luxurious services, and enough history at every corner, this 19th-century palace offers the feel of royal opulence. For an ultra-luxe experience, book a peacock suite that overlooks the plush garden and Mughal Terrace. 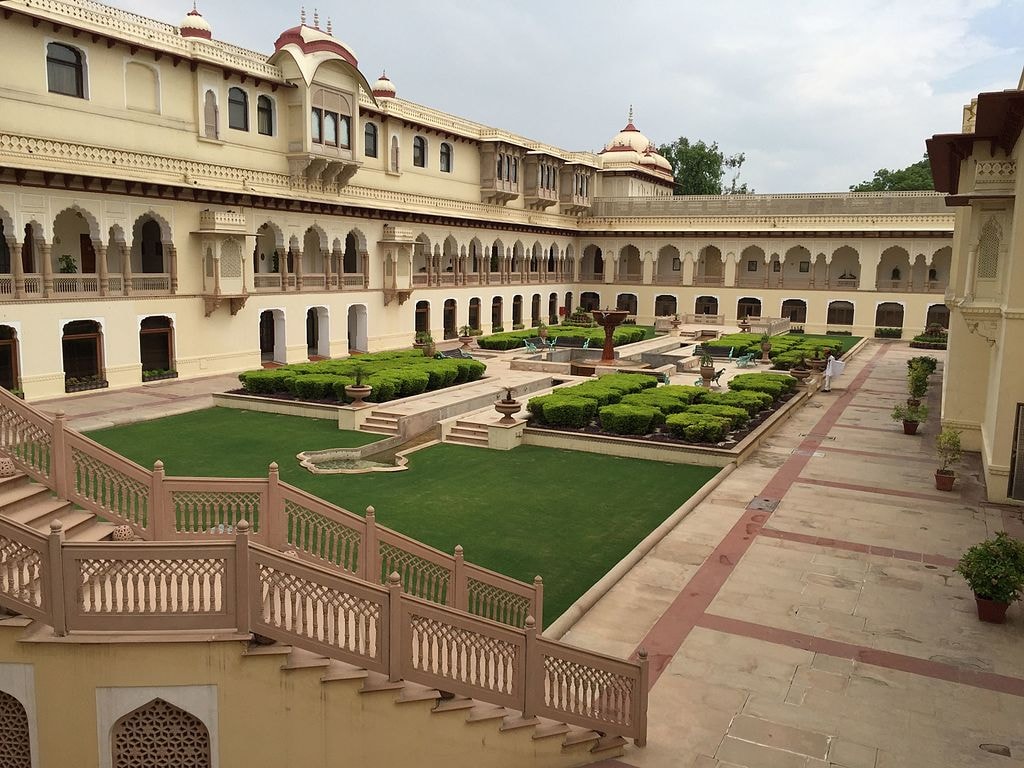