The 10 Best Restaurants In Jaipur, India

Jaipur, a city with a rich history, exhibits no shortage of must see forts and palaces. The city is also known however for its exquisite cuisine. Combining gastronomic traditions from the kitchens of the royals to the street stalls of everyday families, and fusing local culinary traditions with those of neighboring areas, dining in Jaipur is a dynamic and delicious experience. Here’s a list of the best restaurants around. 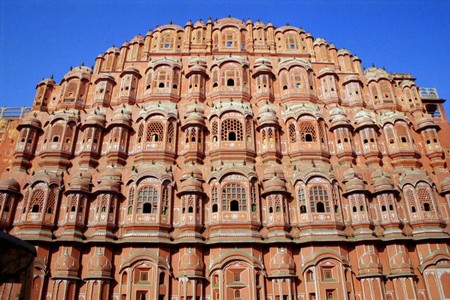 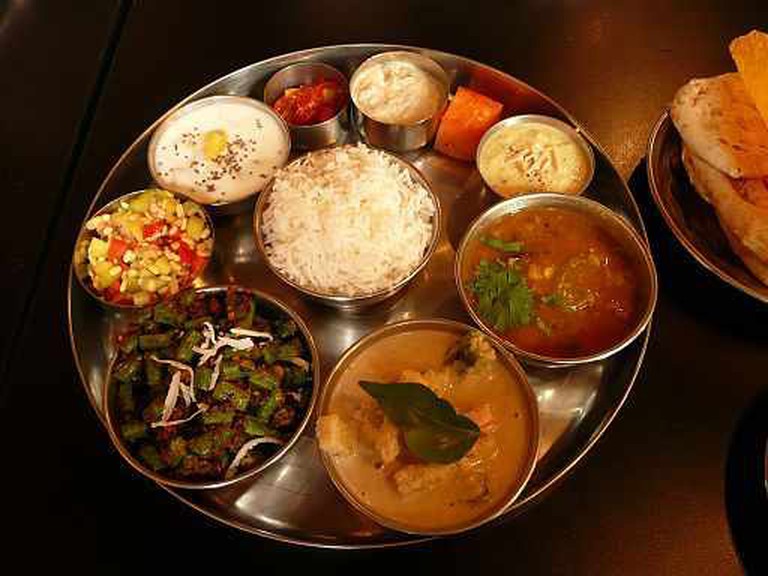 Thali | ©Lisa.davis/Wikipedia Commons
Once a palace, now the Cinnamon-Jai Mahal Palace is a hotel, with a stunning restaurant attached. The restaurant stays true to its rich heritage, exhibiting a grand ambiance, tasteful decoration and welcoming staff. Stepping into this 18th-century palace gives diners a chance to experience a taste of the exquisite Rajashthani royal cuisine. Dishes once prepared in the royal kitchens are given a contemporary twists, and are influenced by two culinary empires, Mogul and Punjab. We recommend the Rajasthani thali, a delicious starter dish consisting of small but appetising portions of vegetable curries, lentils, rice and Indian style bread. Be sure to reserve a place as this royal location, as it is highly sought after and in popular demand.
Open In Google Maps
Jacob Road, Civil Lines Jaipur, Rajasthan, 302006, India
+911416601111
Visit Website
Give us feedback

An authentic experience is to be had at this unique mock up of a traditional Rajasthani village restaurant. Overflowing with a Rajasthani ambiance, many hours can doubtless be spent watching the folk dances, listening to the traditional music, or taking camel rides before diving into the array of traditional ghee based dishes. Considered to be one of the most impressive culinary attractions in the area, this restaurant experience is a priority for all travelers passing by the region.

As one of the oldest food establishments in the city, Laxmi Misthan Bhandar is well known and conveniently located. With roots going back to 1950s, it is famous both among locals and tourists, and has become something of a celebrity in the culinary world. Purely vegetarian and reasonably priced, it holds true to the value of the traditional Rajasthani dishes and is in particular famous for its milk based sweets. After a bustling day in downtown Jaipur, this air conditioned restaurant is a well deserved pit stop. With quick service and a variety of local dishes your stomach will be satisfied in no time.

Restaurant, Indian, Asian, Vegan, Vegetarian, Gluten-free, $$$
Facebook
Email
Twitter
Pinterest
Copy link
Share
Map View
For the carnivores among us this restaurant is a must, with a menu hosting an array of mouth watering meat based dishes infused with traditional Indian spices. Classy, modern and stylish and true to its name, enjoy views from the rooftop terrace and whilst inhaling the sweet scents of hokkah, more commonly known as shisha. Food here is known for its quality and quantity, often cooked in a traditional, tandoor oven over intense charcoal flames. Customers at this restaurant will leave feeling full and satisfied.
Open In Google Maps
Jaipur, City Pearl, 5th Floor, Sanjay Marg. Gopalbari,, Opp RTDC Gangaur, Near Vidhyakpuri Police Station,, , Rajasthan , 302001, India
+9571365457
Give us feedback

Be it a romantic evening dinner or morning of contemplation, this restaurant offers the option of both indoor or outdoor seating, and an array of Indian and continental meals. Sit on the rooftop terrace and admire the view of the Hathori Fort, whilst taking in the friendly, peaceful songs of the colorful garden birds and sipping spice infused masala tea, an aromatic blend of cinnamon, cardamom ginger, black peppercorn and black tea leaves.
Open In Google Maps
Hathroi Jaipur, Rajasthan, 302001, India
+911414012795
Visit Website
Give us feedback

Diner, Restaurant, Indian, Vegetarian, Vegan, $$$
Facebook
Email
Twitter
Pinterest
Copy link
Share
Map View
Located within the pink city and surrounded by beautiful gardens, the Suvarna Mahal at Rambagh Palace is rumored to top the list for best thali dishes around. Providing an array of appetizers including vegetable kebabs as well as milk based desserts, the menu offers something to satisfy everyone. Candlelit tables create a romantic, fairy-tale like setting, and the private, intimate seating makes for a memorable experience.
Open In Google Maps
Bhawani Singh Road, Rambagh Jaipur, Rajasthan, 302005, India
+911412385700
Visit Website
Give us feedback

Located inside the magnificent Rambagh Palace, this restaurant offers a calm, surreal experience especially after the bustle of the city. Here, you have the choice of mixing modern with the past or staying true to the traditional. Choose from an array of local Rajasthani dishes or reap the benefits of globalization and eat a pizza whilst admiring the elaborate make-up of this architectural masterpiece. The experience is sure to entice any and all travelers. Indulge in international cuisine whilst watching Indian dances during the evenings and nights. There is also ample opportunity to enjoy the panoramic views of the palace gardens. 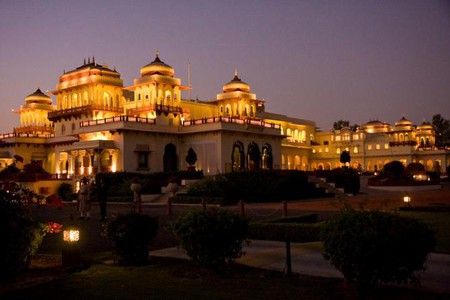 Hotel
Facebook
Email
Twitter
Pinterest
Copy link
Share
Map View
Reservations are recommended at the 24/7 Lalit Jaipur, as this popular restaurant is the epitome of the fine dining experience and is constantly busy. Whether 4 in the afternoon or just in time for a midnight snack, this restaurant maintains its first class service throughout. Infusing both local and international cuisine in the menu, the restaurant is ideal for those who crave a taste of home during their travels.
Open In Google Maps
Saraswati Nagar Extension, Chainpura, Malviya Nagar Jaipur, Rajasthan, 302017, India
+911415197777
Visit Website
Give us feedback 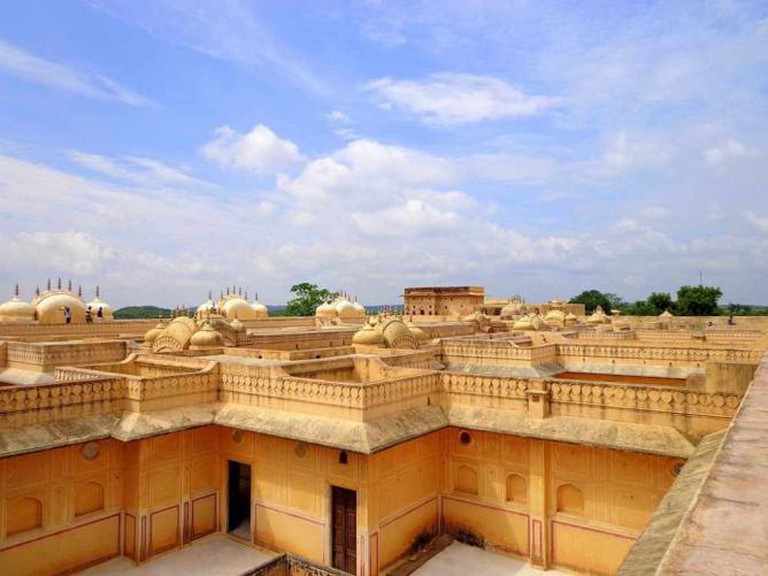 Naharagah Fort | © vsvinaykumar/WikiCommons
Designed 200 years ago by a British architect, this building has won awards for its architectural features. The romantic spirit of Rajasthan can be felt whilst sitting on the terrace restaurant and overlooking the spectacular Nahargarh Fort and Garh Ganesh temple. This restaurant differs from the norm as diners eat what is offered and available that day, rather than choosing from a menu, This, for the adventurous traveler is no doubt culinary spontaneity at its finest.
Open In Google Maps
Char Darwaja, Chokdi Gangapol Jaipur, Rajasthan, 302002, India
+919414069073
Visit Website
Give us feedback

Handi is located in central Jaipur on the busy M.I road, offering a spectacular skyline view of Jaipur. Offering both tandoor and Mughali specialties, this restaurant proves to be popular with both tourists and local residents.Try the handi meat, slow cooked for hours on a low charcoal flame thus retaining an exquisite, succulent flavor. This restaurant is a true reflection of both the cuisine and culture of Rajasthan, and is a local Jaipur treasure.