The Best Hotels in Jodhpur, India

Blue City, Sun City or just Jodhpur – whatever you call it, the second city of Rajasthan is a spectacle to behold, with a cobalt-coloured network of ancient streets surrounding the mighty Mehrangarh Fort, which dominates the skyline. Wondering where to stay? Take your pick from lavish palaces, historic havelis and luxurious hotels – these are our favourite places to stay in Jodhpur (and they’re all bookable on Culture Trip). 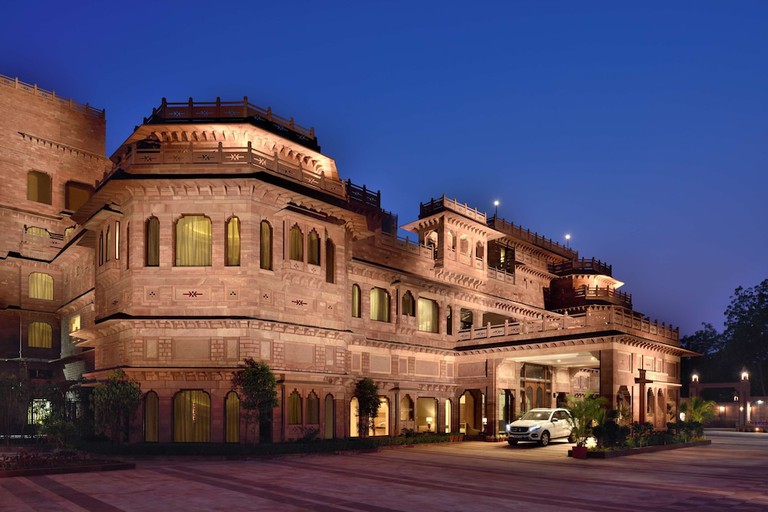 Just a langur’s leap from the airport, Radisson Jodhpur has a pristine courtyard pool and opulent spa. Ample rooms have large arched windows, marble floors and intricate lattice details. On a plant-based diet? All three of the hotel restaurants are strictly vegetarian, but even ardent carnivores will enjoy dinner on the roof terrace, which has fabulous views of Mehrangarh Fort. 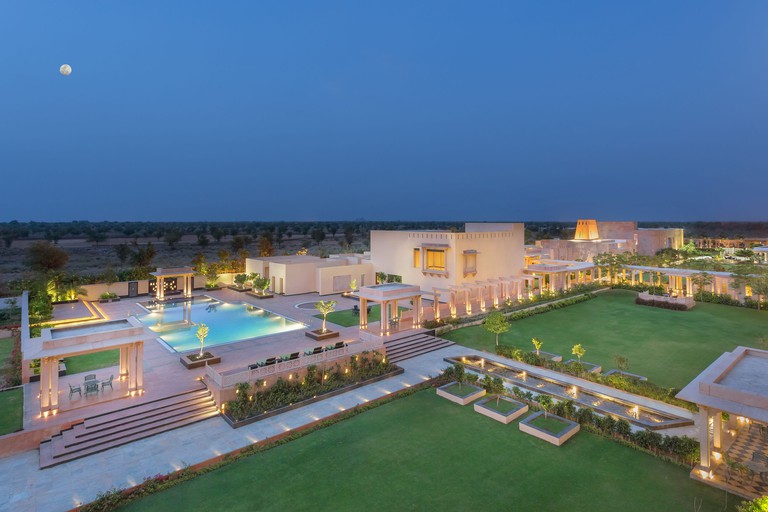 Spanning 4ha (10 acres) of lush walled lawns, surrounded by arid fields, Welcomhotel is an oasis of a hotel just a 25-minute drive east of Jodhpur. After a day exploring the Brahmin-blue lanes of the Old Town, book a sandalwood and turmeric body scrub or deep tissue massage at the spa, or cool off in the expansive pool. Cooking and mixology lessons are available, but if you’d rather leave it to the experts, don’t miss the free pre-dinner drinks. 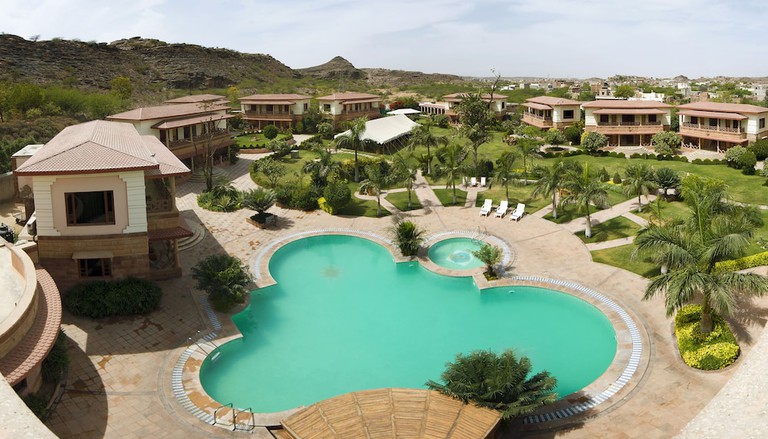 Hugged by a rocky hillside, The Marugarh Resort & Spa features a freeform pool and an ayurvedic spa with a sauna, steam room and jacuzzi. Clean, basic rooms have balconies, and encircle a lush lawn lined with palm trees. Central Jodhpur is a 25-minute drive west; other nearby attractions include The Thar Desert Museum of Rajasthan, where you can learn about rural Rajasthani culture. 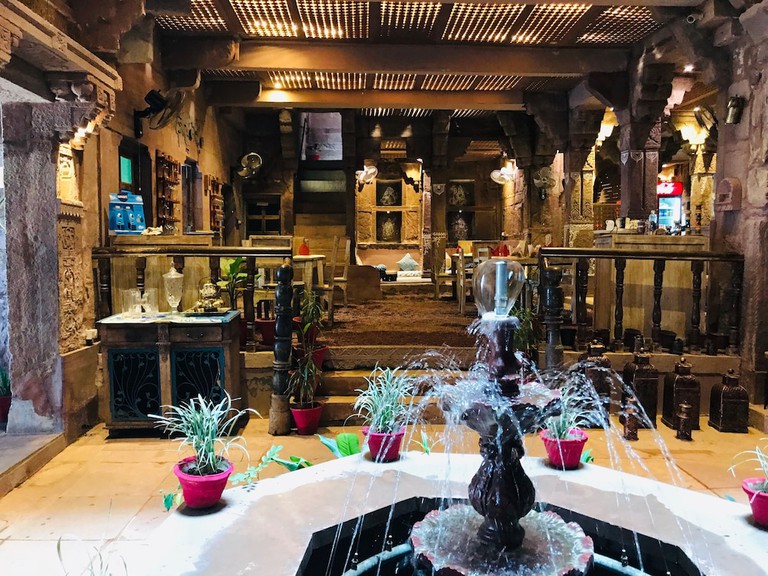 The searing heat of Jodhpur can weary even the hardiest of travellers – but those who bunker down within the thick sandstone walls of Rani Mahal will find respite, as well as kind hosts and divine laal maas (mutton curry). The rooms in this 400-year-old haveli are compact but ooze character – many feature intricate bedsteads and colourful murals. Brave the steep trek up to nearby Mehrangarh Fort, or soak up views of the golden ramparts from the rooftop hotel restaurant. 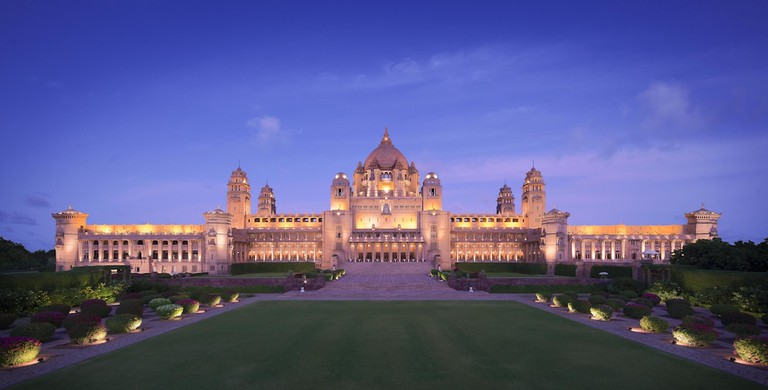 It took 3,000 labourers 15 years to build Umaid Bhawan Palace, and the results will blow you away. Completed in 1943 using sandstone, Makrana marble and Burmese teak, the property was built for Indian royalty and remains one of the largest private residences in the world (Gaj Singh II lives in a separate wing). Rooms are grand art deco affairs – the best have views of the 10ha (26 acre) gardens. Join a guided tour to learn more about the history of the palace. 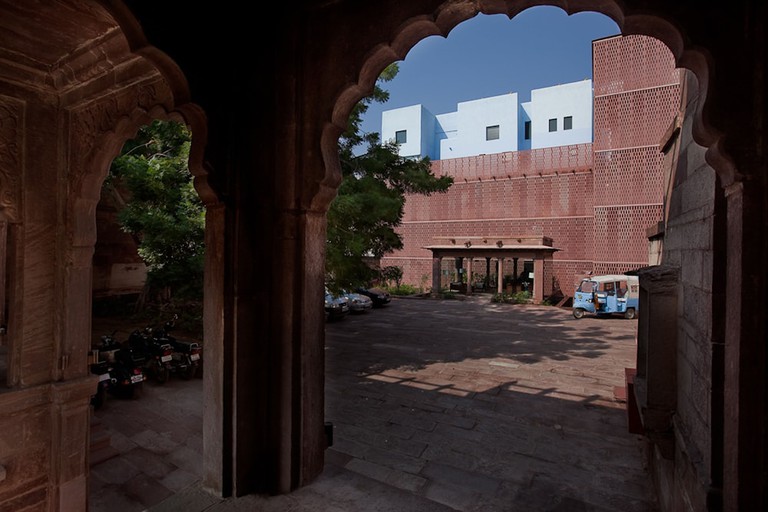 Modern and ancient intertwine at RAAS, where 40 boutique rooms and suites span a converted 18th-century haveli in the shadow of Mehrangarh Fort in the Old City. The rooftop bar has killer views of the fort – particularly at night when the latter is lit up – as does the heated pool. Willing to venture beyond these most luxurious of confines? Ghanta Ghar, a century-old clock tower surrounded by buzzy market stalls, and the ancient Toorji step well are just moments away. 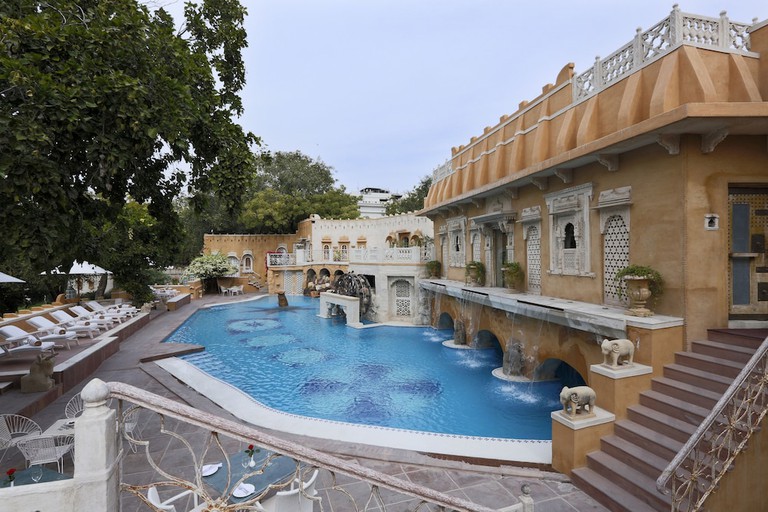 Courtesy of Ajit Bhawan / Expedia
View Rooms
Once the home of the Maharaja of Jodhpur’s younger brother, the Ajit Bhawan – built in 1927 – displays the heritage proudly, with an eclectic mix of historic portraits, swords, antiques and mounted stag heads. You can lounge by the freeform pool, get treated like Indian royalty at the little spa, or tour the Blue City in a butler-driven vintage car.
More info 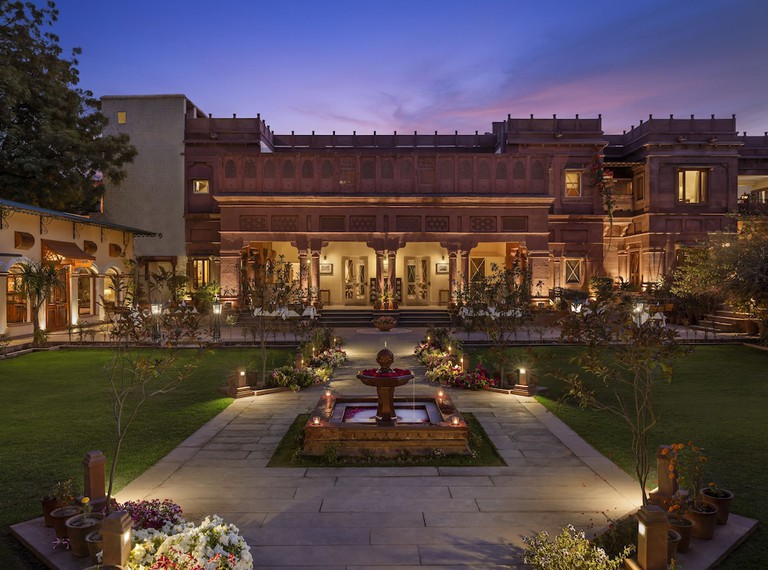 Courtesy of Ratan Vilas / Expedia
View Rooms
This historic boutique was once the residence of Maharaj Ratan Singhji. Today, his great-grandson welcomes guests to experience his ancestral home – and what a home it is. Carved from red sandstone and trimmed with jaali (intricate perforated stonework), with a sparkling pool, manicured lawns and 21 characterful rooms, Ratan Vilas exudes old-world charm. An even grander palace and quintessential Jodphur attraction, Umaid Bhawan Palace, is a 10-minute tuk-tuk away.
More info 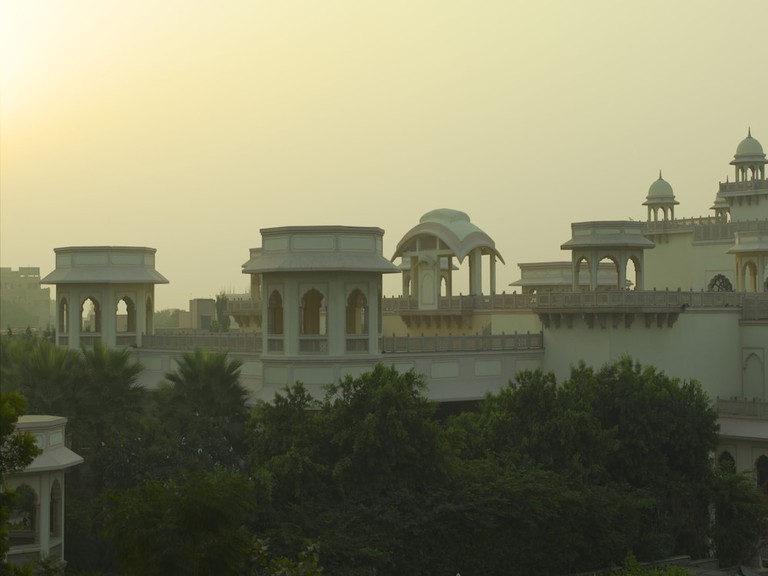 At the more affordable end of the Taj chain of global luxury hotels, Taj Hari Mahal is a 20-minute drive south of the Old City, not far from the airport. The heritage-style rooms are spacious and calm – a much-needed contrast to the noisy main roads outside. The large courtyard pool is a welcome sight after an overnight trip to the Thar Desert. 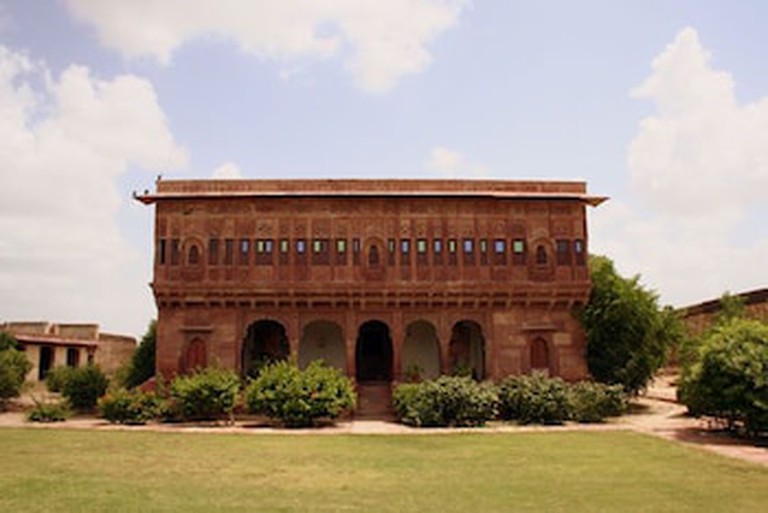 Courtesy of Chandelao Garh / Expedia
View Rooms
Time slows at Chandelao Garh, a rural hotel 40km (25mi) east of Jodhpur. Take a taxi, or if you’re feeling adventurous, a local bus – both take about an hour. Once you’re here there’s not much to do except lounge by the pool, indulge in ayurvedic spa treatments or wander the local village. Want to support the local community (and pick up a souvenir)? Visit Sunder Rang, a fairtrade crafts centre next door selling embroidery, clothing and accessories made by local women.
More info 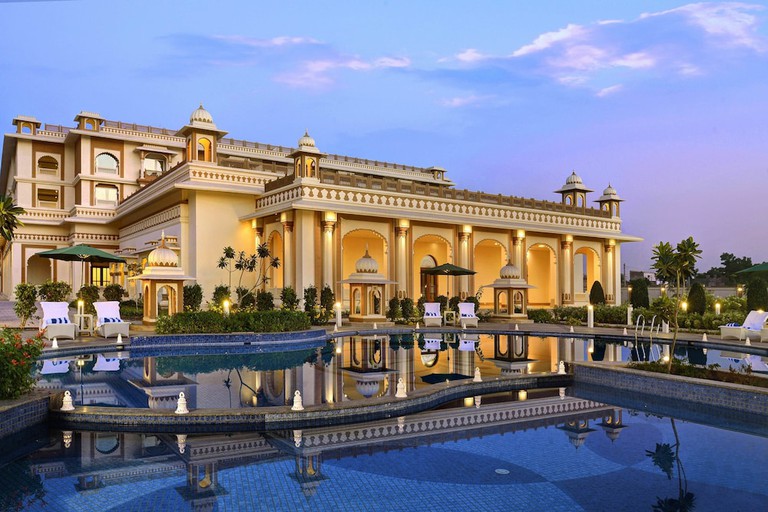 Rooms at the opulent Indana Palace feature cool marble floors, carved bedsteads and courtyard views. Some rooms look out at the hilltop Umaid Bhawan Palace – visit the museum there to learn more about the maharaja’s grand home. Back at the hotel, a knot-busting shiatsu treatment is the perfect pre- or post-flight treat; the airport is less than 10 minutes away. 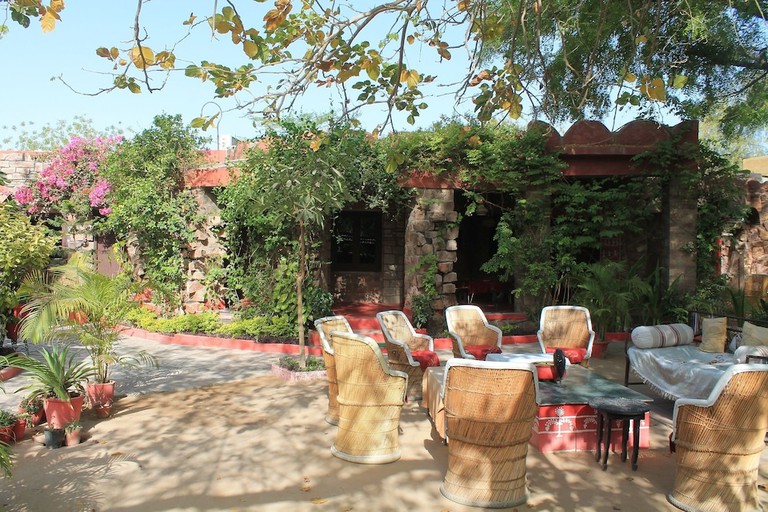 Courtesy of Mandore Guest House / Expedia
View Rooms
There’s a villagey feel to Mandore Guest House; meandering paths in a leafy garden will lead you to one of 20-or-so cosy bungalows, and the grounds are dotted with al fresco seating areas and a glistening pool. Mandore Gardens are a short walk away – go to see the centuries-old cenotaphs dedicated to Jodhpur rulers and to learn about the period Mandore served as the old Marwar region capital.
More info

This is an updated version of an article originally by Prachi Vyas.