The 10 Best Hotels And Guesthouses In Udaipur

The 10 Best Hotels And Guesthouses In Udaipur

The Leela Palace Udaipur | © gags9999/Flickr
Udaipur is a city full of rich history, dating from the royal eras of India full of queens and kings. This is one of the few cities that has remained in the past by preserving its architectural glory and deeply rooted culture. When visiting this city, it is important to stay somewhere where the history is palpable or where it’s easy to head out and tour Udaipur’s famous spots.
The Leela Palace Udaipur © gags9999/Flickr

Hotel
The Leela Palace is located on the famous Lake Pichola, within view of the Aravalli Mountains. This is as majestic as the scenery can get here. Waking up every morning to the foggy peaks in a luxurious suite in northern India really is as good as it sounds. The aura of the hotel makes guests feel like they have travelled back in time and are staying in one of the grand palaces of the Maharajas. Who wouldn’t want to feel like a king?
More Info
Open In Google Maps
Pichola Udaipur, Rajasthan, 313001, India
+912946701234
Visit website

Hotel
When in such a scenic location, it is a waste to stay away from the mountains and the lake. Jaiwana Haveli has the perfect location looking over both, so it is definitely worth the extra bit of money. This hotel is a private residence owned by some of the elite in the city. The aged exterior is balanced by a very modern interior with all the latest facilities. It is quite small, so make sure to book well in advance to score one of the 24 rooms in the residence. Taj Lake Palace
The Taj Lake Palace is truly a palace in its own right. The five-star hotel is set in a 18th century building representative of medieval India. Every single detail is ornate and keeps a continuous theme throughout the hotel. Feel like a celebrity in an opulent room covered in tones of gold from floor to ceiling. To make it even more appealing, the hotel was featured in the James Bond movie Octopussy, and is now nothing short of legendary in the town!
More Info
Open In Google Maps
Rajasthan, India

Hotel
Another hotel located on the glistening Lake Pichola, The Oberoi Udaivillasis probably one of the largest tourist residences in the city. Spanning a vast 50 acres, the area includes a wildlife sanctuary, the hotel, lake, and canals. Indulge a little and book one of the more opulent suites, such as the Kohinoor, where every detail is meticulously planned so that you can have the best stay possible. Oh, and did we mention that this one has been listed continuously as the finest hotel in the world!
More Info
Open In Google Maps
Badi-Gorela-Mulla Talai Road, Haridas Ji Ki Magri, Pichola Udaipur, Rajasthan, 313001, India
+912942433300
Visit website

Hotel
Anjani Hotel Terrace | © Travelwayoflife/Flickr
In 1990, the famous Seth Naga Ji Kapoor Chand Shah was renovated into what is now known as the Anjani Hotel. This particular hotel encompasses a lot of history and heritage. They prize culture and make sure that all guests get an authentic Indian experience. There is an infinite amount of architectural detail in the exterior and interior of the hotel that will leave you in awe, so make sure to take time and admire and appreciate the hotel surrounds while you’re here
More Info
Open In Google Maps
77 Gangaur Ghat Marg, Near Jagdish Temple, Udaipur, Rajasthan, 313001, India
+912942421770
Visit website

A small, quaint and somewhat off-the-beaten-track little guest house set across from the hubbub of the main city and amidst the tight-knit streets of Udaipur’s old town, Lassi touts a handful of charming, newly-renovated rooms with balconies and interesting Indian touches. Some come with air conditioning, while breakfast is offered free-of-charge on the rooftop. The real plus though? The super-friendly folk behind reception, bearing constant smiles and offering some great cooking classes to boot!

Udaipur is known as the “city of lakes” or the “Venice of the East”, so it is a must to take in the views of the city’s waters. Trident is the perfect location for this to happen. With over 137 rooms covered in shades of beige and cream, the elegance is evident. Every corner you turn, the staff is at your service and ready to provide you with whatever you need. In the evenings, the dining rooms are prepared with a lavish feast fit for a king. 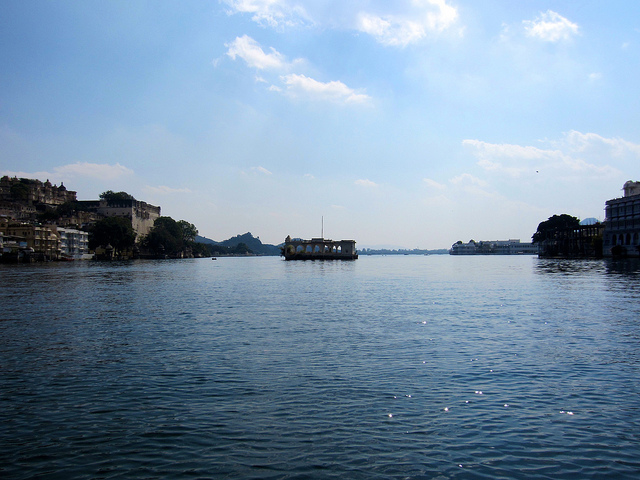 Nestled within the Aravalli Hills, The Lalit Laxmi Vilas Palace looks over the entire city and the Fateh Sagar Lake. Built by a king, this place is definitely fit for a Maharaja. The location is ideal because it is just a few miles away from the airport, the city center and the railway station. Rajasthani culture is prominent throughout the hotel, intertwining with the grandeur and elegance. Smaller than a few of the others, the restored hotel has 55 rooms in all.

Hotel
A tad more modern in feel and atmosphere than many of Udaipur’s other hotels, the Anantais known for its modern comforts. If guests are looking for the perfect place to relax and enjoy sunrises and sunsets, this is it! Every room in the hotel provides access to an unbelievable panorama. Make sure to also stop by the spa to unwind!
More Info
Open In Google Maps
Udaipur, Rajasthan, 313001, India
+912942689000
Visit website

The Raas Devigargh is very deceptive from the outside. The old architecture is not carried throughout the interior. Instead, the suites are covered in contemporary décor. This renovated 18th century palace is decked out in minimalist styles and amenities that make you feel at home even though you may be a world away. Make sure to try your hand at the private croquet garden when staying at the Raas.