Sheroes’ Hangout is a heart-warming café run by five acid attack survivors. Coming out with courage, this is a first of its kind initiative in a country where beyond suppression, there’s fierce trauma and a scarred life.

You’ve read about them, seen them and heard about them. You think you know them well and have sympathized, but it’s only when you meet them that you go pale. Losing a sense of how to act and how not to, you don’t know what might offend them. Would your staring make them feel awkward? Yet you can’t take your eyes off of them or know what they — the acid attack survivors — are feeling.

Sheroes’ Hangout in Agra has garnered quite some media coverage in the past couple of months and rightfully so. The Taj may be an old wonder, but here’s an initiative to level the playing field (a tad bit) for the ones shoved into a life of obscurity, anonymity, pain and disgrace. Where shock is a remedy, this café hits where it hurts the most. A first of its kind — an initiative by Stop Acid Attacks campaign and Channv Foundation — it’s run by five acid attack fighters. The seed was awareness. It’s a fight against stigma, against discrimination, a battle for normalcy after suffering, and for equal opportunities.

Victims of sexist whims, it’s in a mere moment that a woman’s lifetime is scarred. Often not resulting in death, the consequences are dire, being physically disfigured, disabled, and psychologically disturbed, shunned and forced to give up a public life — work, education and living. It’s difficult to fathom such a trauma that is layered in personal pain and public shame but here’s hope, in her full smile and beckoning nods. Fighters, heroines, survivors, but not victims; Rupa, Neetu, Ritu, Geeta and Chanchal, with their bitter heinous accounts of scars and fused faces, spring up from behind the counter when you open the door to this colorful, cozy café.

Delhi’s Hauz Khas and Shapurjat have long boasted of quaint cafés and hangouts, and now Agra has one of its own with Sheores’. Adorned with elaborate graffiti, wall art and trinkets, it’s one of the first café hangouts in the quiet city of old-world charm, complete with grand hotels and restaurants. Smiling portraits of acid attack survivors hang on the walls. They try to make you feel comfortable. With a library and a boutique (selling apparel designed by Rupa, one of the five women), Sheroes’ Hangout doesn’t charge. It operates on a pay-as-you-wish format. A section is dedicated to handicrafts — pebble art, paper and marble work. 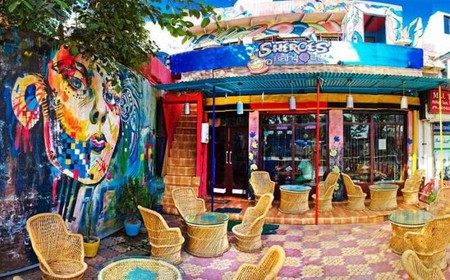 The café | Courtesy of Sheroes’ Hangout

On the menu is a list of treats that Agra binges on, with nothing fancy but exceptionally yummy. From pakoda platters to pastas, it’s presented to you in a very casual manner, something reminiscent of your childhood years. They may not be Whoppers, but the burgers are a must-try.

The café lives in its timeworn walls and low parapets, an old structure now painted all bright and red. The narrow flight of stairs pulls a thread of nostalgia — a sepia-tinted 20th century. But that’s how Agra is — half sleepy in its Mughal-Anglo hangover. You will definitely want to experience the local scene once you’re done with the exotic and splendid hotels that are spread out across the city.

A place where women are behind the counter is still not a common sight. Sheroes’ is a power to reckon with — a mighty effort and narrative of our moving times. Once burnt and scarred for life, these are five fellow humans slowly shedding the veil and counting on courage.

Ask them how they’re doing, and you hear an excited ‘very well’ in response. ‘You liked the sandwich? Do you want some more chutney?’ It’s just a matter of asking. You’ve definitely grown comfortable by now, ‘You know, the neighborhood aunty could have her as a help at her boutique.’ It was not them coming out but me — to see them as anyone else who deserves just the same.