Rural India Through The Lens Of Cinema 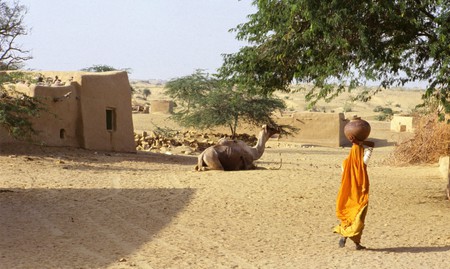 Though nearly three fourths of the country’s population is estimated to live in rural areas, rural India rarely gets coverage in contemporary mainstream cinema. For everyone curious about life in rural India, we bring you a list of the best films – Bollywood and not – set in non-urban India.

Shot with a cast of non-professional actors from villages in the Mandya district of Karnataka, this film tells the tale of three generations of sons reacting to the death of Century Gowda, their 101-year-old, locally renowned patriarch. As the winner of the National Film Award for Best Feature Film in Kannada at the 63rd National Film Awards, this is one not to miss!

This black-comedy film directed by acclaimed filmmaker Shyam Benegal is about a young graduate with a Bachelor of Arts degree who wishes to become a novel writer, but instead has to make a living writing and reading letters for the illiterate people of his village. Through the stories of various villagers who regularly approach him to read and respond to their letters, the movie gives us a colorful picture of rural India today.

Chaos is fun! Watch the chaotic life of people in Sajjanpur. Watch #WelcomeToSajjanpur on #Miniplex

City Lights, rather than painting a picture of rural India, tells the story of rural Indians who shift to the country’s urban side. The critically acclaimed film is about an ex-army man from Rajasthan who moves to Mumbai with his wife and child in search of a better lifestyle and the extreme challenges that come their way.

This film, starring Bollywood’s biggest star, Shah Rukh Khan, tells the tale of an Indian-American NASA employee who returns to India to take his nanny back to the U.S. with him, but in the process falls in love with rural India.

#Swades grossed ₹152.5 million (US$2.6 million) in India and was given the verdict of a #flop. Many attributed this to its competition with #VeerZaara, another #ShahRukhKhan film, which had released on #Diwali only three weeks earlier and was still continuing to garner strong #boxoffice collections. However, in the overseas market #Swades2004 made $2,790,000 and was given the verdict of a #semihit. #SwadesMovie had a #lifetime #worldwide gross of ₹342.6 million (US$5.8 million). #SwadesHindiMovie was Shahrukh Khan's first flop after many years, iin that year he had two other major hits #MainHoonNa and #VeerZaara2004. The film received #overwhelmingly strong #criticalacclaim from #critics. Most of the critics felt that Shahrukh Khan's performance in Swades was his #bestperformance till date and it was featured on #Rediff's list of the 10 Best #Bollywood Films of the decade.

This film is about an indifferent young man who seeks an escape from his boring small-town life, and so he agrees to drive a truck through the remote deserts of Rajasthan to deliver it to a museum. Road Movie was a hit among critics and in the film festival circuit. After witnessing the film’s stunning visuals, rich characters, top-notch storytelling, and the various eccentric characters he runs into during his journey, you too will be stunned!

This award-winning satirical comedy film about a poor farmer’s threat to end his life and the unexpected attention he gets from political figures and the mainstream media is based on one of the most worrying problems affecting rural India – suicides among debt ridden farmers.

This hilarious movie is set in rural Punjab, from where the protagonist had once fled after having stolen from his grandfather to move to London. The movie tells the tale of his return to the village while he is on the run from a U.K.-based gangster to whom the protagonist owes money, and highlights his attempts to discover the secret ingredient to a dish that had once been at the core of his grandfather’s thriving, but now shut down, restaurant business.

Unlike other movies in this list, NH10 isn’t really an account of life in rural India. Rather, it tells the tale of an urban couple who have a nightmarish experience deep within rural India, and in the process, the movie giving a picture of village life at its worst – plagued by inequality, rigid social hierarchies, and a general sense of doom. While the other movies in this list will help you soak in the color and dynamism of rural India, this one will give you a thrilling yet powerful sense of its evils.