This Homestay Could Help Save Rajasthan’s Nomadic Camel Pastoralists 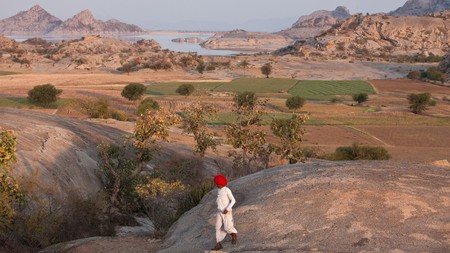 Raika pastoralists in southern Rajasthan are facing serious challenges to their traditional way of life. A homestay scheme set up by a local NGO offers a chance to learn about the problems faced by India’s nomadic camel herders, and a potentially transformative new source of income.

You tend to hear Raika herders well before you see them. First, the tinkling of copper neckbells as the flock approaches. Then, perhaps, the crash of a sling-shot stone through the scrub, or the distinctive, rasping call a shepherd makes when he wants his ewes to slow down. Finally, from behind a curtain of sun-bleached grass and swirling dust will emerge two or three crimson-coloured turbans, framing weathered faces.

Three Raika shepherds, all in their mid-forties, have paused for a puff under an acacia tree. Leaning on cane lathis (sticks), they cup their hands over their beedi cigarettes, periodically emitting plumes of smoke that catch shafts of sunlight streaming through the branches above them. 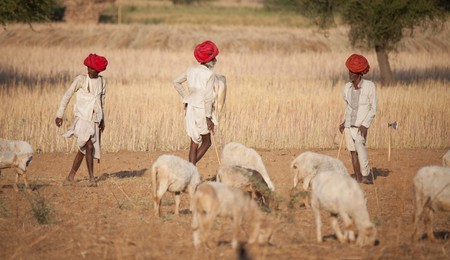 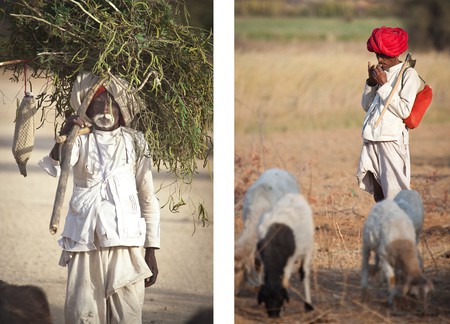 Left: Collecting fodder for the camels / Right: Raika shepherd pauses for a smoke before bedding down for the night | © David Abram

As well as their trademark red pagris (turbans), the men are also wearing traditional Raika tunics of white cotton with old-style dhotis (sarongs) and upturned, pointed leather slippers. The senior member of the trio, Ram Prasad, casts an eye over his flock grazing contentedly nearby.

“In my father’s time, they camped with sixty or seventy camels in this place, sometimes more. Now, we have only two,” he says, pointing to the pair of hobbled females at the edge of the clearing.

“There’s no money in this way of life. My sons and their wives have all left for Delhi. Only oldies like us still sleep out,” he explains, expectorating a jet of tabacco spit into the sand at his feet. 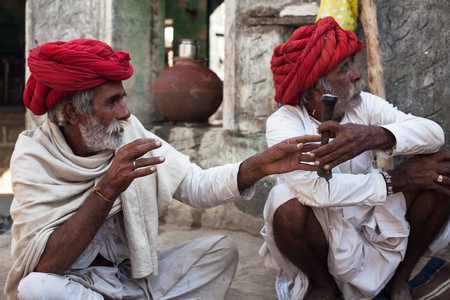 Fifteen or more years ago, the Raika – or ‘Rabari’ (literally ‘Outsiders’) as they’re sometimes called – were a common sight across northwest India. Leading a semi-nomadic existence divided between village and traditional transhumant routes, they would often be encountered on the fringes of the Thar Desert in Rajasthan and Gujarat, plodding along the backroads in family groups, the women riding ahead, swaying atop huge camels with vibrantly painted charpoi (string beds), cradles, pots and pans lashed to their saddles, an infant often at their breast, and husbands following behind on foot with the sheep and goats. 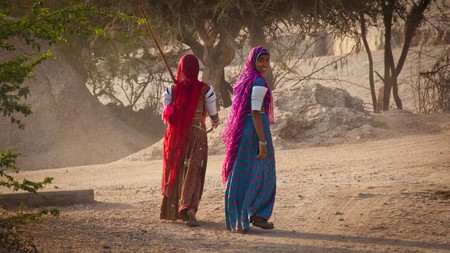 Now such scenes are a rarity, unusual enough to cause city types to stop their cars and whip out their cell phones for a photo: old meets new India. But in recent decades, the bottom has fallen out of the Raika’s world.

The problem with camels

Ram Prasad waves his staff in the direction of a long, barbed-wire fence stretching to the south for as far as the eye can see.

“You see that fence?” He spits again. “Before, the farmers here were happy to see us. Our herds fertilized their fields in the dry season and helped their crops grow when the rains came. Now they grow cotton using chemicals, and they get angry if our animals eat their plants. So they put up these fences, which block our paths for miles in every direction. It’s impossible to follow the old routes. We move in decreasing circles.”

But there are other reasons for the decline. When the subject of ‘market prices’ comes up, Ram-ji’s cousin, Jagdish, mutters under his breath in thick, Raika dialect, and all three men stare away in opposite directions, shifting uneasily on their feet. No one in this predominantly Hindu, vegetarian part of India likes to talk about it, but until a few years ago unwanted camels used to be sold for slaughter to wholesalers working out of the Gulf states. Then, in 2015, the right-wing, pro-Hindu government of Rajasthan announced a blanket ban on sales of all camel meat. 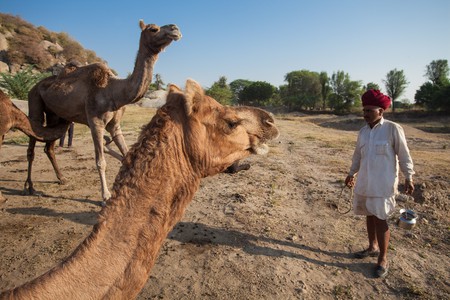 Ganga Ram out with the camels | © David Abram

Overnight, livestock prices plummeted. Camel fairs such as the one in Pushkar, where several thousand animals used to change hands over the course of a week, now only attract a few hundred animals, at best.

The result has been an exodus of young Raika to the cities where, instead of following their elders with the herds, they now swell the burgeoning ranks of the capital’s impoverished, slum-dwelling day labourers scraping a living on construction sites.

There is, however, a glimmer of hope. At the foot of the Aravalli mountains in southern Rajasthan, a new dairy has been set up to which Raika villagers can bring their camel milk. Using state-of-the-art equipment, it’s pasteurized, bottled and transported from the facility in refrigerated lorries for sale in the affluent suburbs of the capital, a day’s drive north.

The scheme was the brainchild of a German-born vet, Ilse Köhler Rollefson, who came to the area 25 years ago to study the socio-economics of camel herding, and never left. 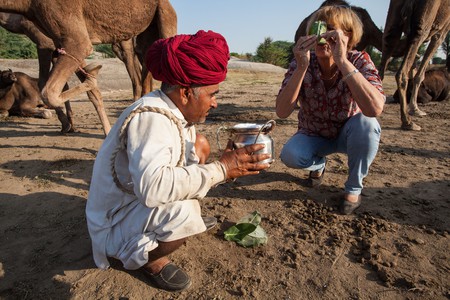 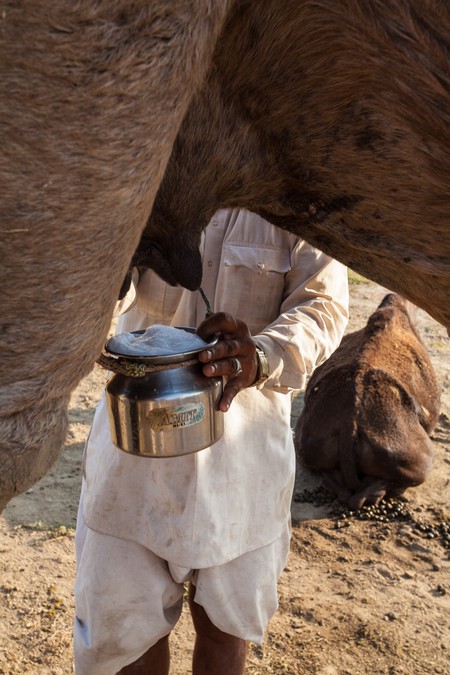 A camel is milked at Sadri | © David Abram

“I loved it here from the start,” Ilse explains, seated on the verandah of her small farmhouse, deep in the bush. “The landscape is so beautiful, and the way of life wonderful to be around. But I could also see local people had problems. There’s no grazing any more, or veterinary care. And no viable source of income. Camel milk has become the only means local families can earn money.”

She pauses, placing a newly filled bottle on the table. “Thankfully, people in the city love this milk – and not only because it tastes good. Camel milk is also extremely nutritious. The herds graze on wild plants and medicinal herbs, so it is full of vitamins. And very low in fat.”

To help publicise the scheme and raise funds for the NGO that supports it, Ilse has created guest accommodation where visitors can stay in comfort while experiencing at close quarters how the Raika live. 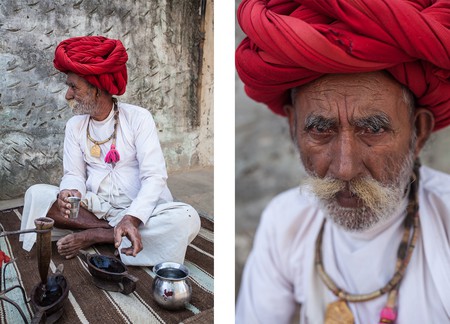 Left: Opium tea is a traditional tipple among older Raika men, most of whom suffer arthritis from years of walking across the desert / Right: Raika elder in traditional red pagri and neck band | © David Abram

The day begins with a visit to a plot outside a typical herding village, where around twenty animals stand motionless in the early morning sunshine, waiting their turn to be milked.

“It’s a unique thing being here, you know,” Ilse says, as a female camel cranes its neck forward to nuzzle her. “People may have ridden on camels in Jaisalmer, but it’s very different being in the middle a milk herd. These females are so peaceful, and gentle and curious.” 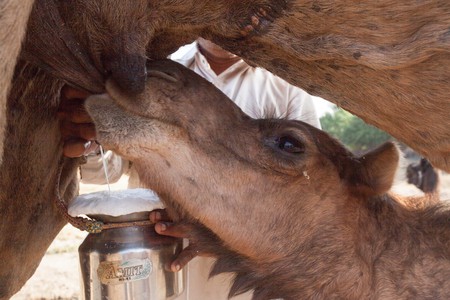 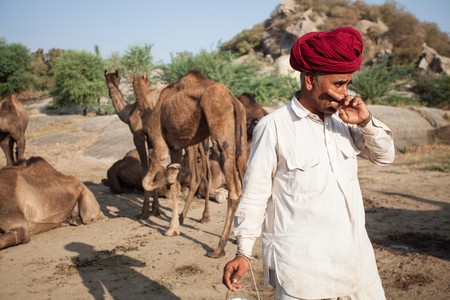 Rakesh offers Ilse a green-leaf cup and sloshes a sample into it for her to taste, then takes a mouthful himself.

“It’s so delicious and good for you,” affirms Ilse. “But most importantly, camel milk is a lifeline for the Raika. The nomadic system in this part of the world is the most efficient and sustainable means of producing food ever devised. In a generation, the soil here will be ruined by cotton production, and if we do nothing to keep the young people in the villages, this culture, which has existed for hundreds or thousands of years, will be gone forever. The knowledge will be lost.”

Later, Ilse joins Ganga Ram’s family in their compound, sharing tea with the elders as their sons clip sheep on the mud floor using old-fashioned iron shears. A veiled matriarch looks on from the kitchen, shading her eyes from the morning sun, which glints occasionally on her nose ring. 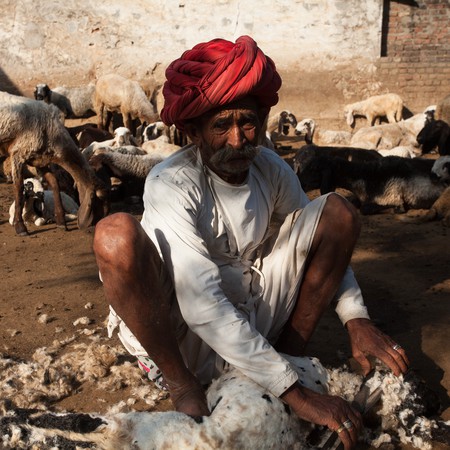 Sheering the sheep in a Raika family compound | © David Abram

“And how else,” Ilse says, surveying the scene with a faint smile on her face, “can visitors experience anything like this?”

Lokhit Pashu-Palak Sansthan (‘LPPS’ for short) offers overnight stays at their centre in Sadri District, between Jodhpur and Udaipur, as part of the ‘Day with the Raika’ programme. Guests visit local villages, watch milking sessions and accompany herders into the bush – a genuinely interactive, memorable way to learn about transhumant life and the threats posed to it by recent changes in Indian agriculture and law. More information about their work is available online. All-inclusive stays at the centre in Sadri may be included in trips arranged by TransIndus in the UK, who have posted a video on the experience here.