Reading Tagore: A Legacy Of Lyrics, Love And Lore

‘I am here to sing thee songs. In this hall of thine I have a corner seat.
In thy world I have no work to do; my useless life can only break out in tunes without a purpose.’

Who is this man, a household name sung by a million people, met at the dawn of schooling, and a serene sigh when the sun sets?

The poignant opening lines are from song 15 from the collection of poems which were once honored, in our structural references, with the Nobel Prize in Literature. The simple song, however, is just another verse in the sea of soul-stirring words penned by Gurudev. Rabindranath Tagore is not a name that would require an introduction, nor any testimony, which is most likely to gasp for the most appropriate word in praise of his. Utmost, our letters could be ponderings – newer meanings, newer revelations of his words upon each time they are reread. 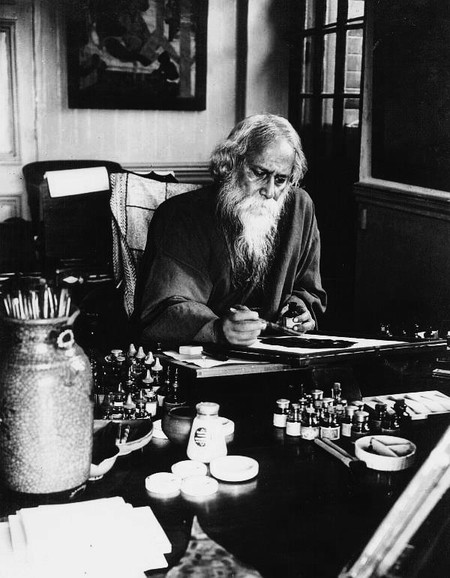 Some stories say how a young Rabi, as he was dotingly called in his childhood, was thrilled upon reading two sentences – simple constructs while learning basic words. These were Jal pawray, pata nawray (water falls, leaves tremble). Basant Koomar Roy (who authored Rabindranath Tagore, the Man and his Poetry in 1915) quotes Gurudev: ‘This is the poetry of the primordial poet that touched my heart. When I remember the inexplicable joy I felt over those words at that time, I realize why rhyming is such an essential factor in verse-making. It is due to the fact that the words do not end with the end of the sound. The thrill from the rhyme lingers in the ears and vibrates in the mind.’

We start reading Tagore as children, and as children, we do not understand the verse Jana Gana Mana recited in morning assemblies and ‘Where the mind is without fear’ printed in our school diaries. It is only much later that we soak in the magic of those words. Starting gradually, the English reader textbook opens up a world of moving tales in the form of short stories.

Relatively a new form then, Tagore’s volumes raised the short story to a serious art form. Infusing stark realism and poetic idealism in his stories, he echoed life in its rawest form, breathing in rural and urban Bengali neighborhoods. The pace is slow, enough to soak in the moment and feel the many conflicts, longings and emptiness. His prose picked struggles and deliberations between the new and the old, morals under the lens, solitude and crowded lonesomeness, man and woman.

Just to feel the pulse, we turn to one of the popular stories like ‘The Postmaster’ or ‘The Kabuliwala’ that bring alive love, longing and hope or the novella Two Sisters – the pathos of the theme, the tender irony with which the characters are drawn, the boldness with which he lets the tragi-comedy of life’s drama run its course make it one of the most memorable stories. He explored relationships drying in unconcern and in the mundane, relationships that must not kindle, many ending in rather brow-raising denouements for the time that was, making him relevant even after a hundred years. Teen Kanya, Ghare Baire, Strir Patra, Gora or Nastanirh (better known as Satyajit Ray’s Charulata) are few of a hundred stories which have been fodder, fueling Bengali as well as Hindi films. 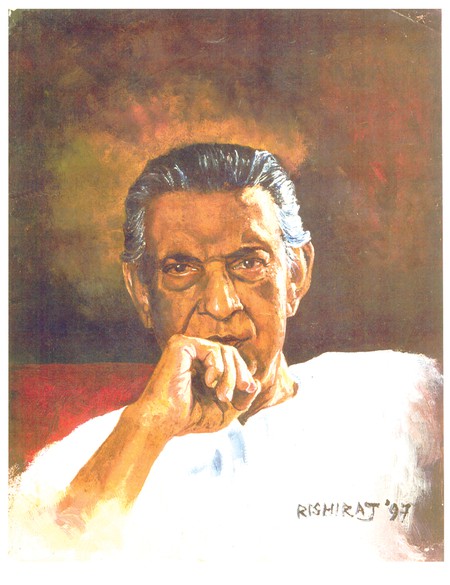 ‘The tree gazes in love at its own beautiful shadow
which yet it never can grasp.’

As his prose so is his poetry – poignant. Tagore’s global eminence rests chiefly on his achievements as a poet; the quality and quantity of his poetry have tended to outshine his contributions in the areas of drama, fiction, and nonfiction. His nearly 60 collections of poetry comprise of short lyrics, which are usually marked by a philosophical strain, a yearning spiritual quest set against the splendor of natural landscape.

Gitanjali, or Song Offerings, was first published in 1910. Featuring 103 poems, it soon garnered worldwide fame as it was translated into English two years later. It was the first of many volumes that would make him an international figure. Of the many who held him in high regard, one was W.B. Yeats, the much revered Irish poet. The 1912 English translation of Gitanjali had an introduction by Yeats, who is enamored by the mysticism of Tagore’s verse, ‘These lyrics…which are in the original, my Indians tell me, full of subtlety of rhythm, of untranslatable delicacies of colour, of metrical invention – display in their thought a world I have dreamed of all my live long.’ 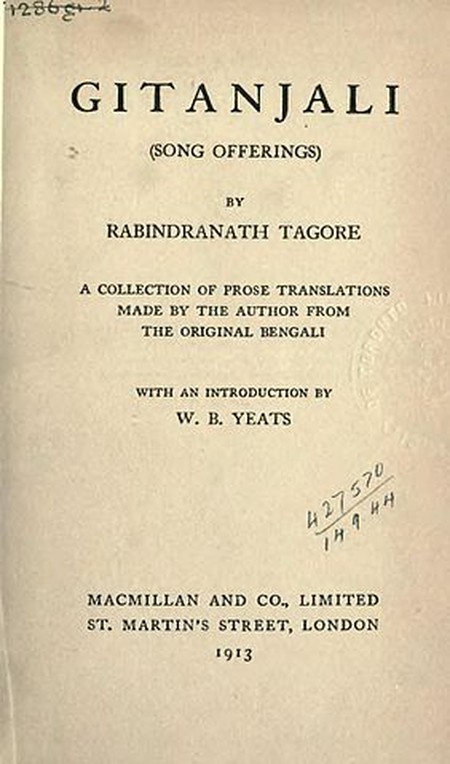 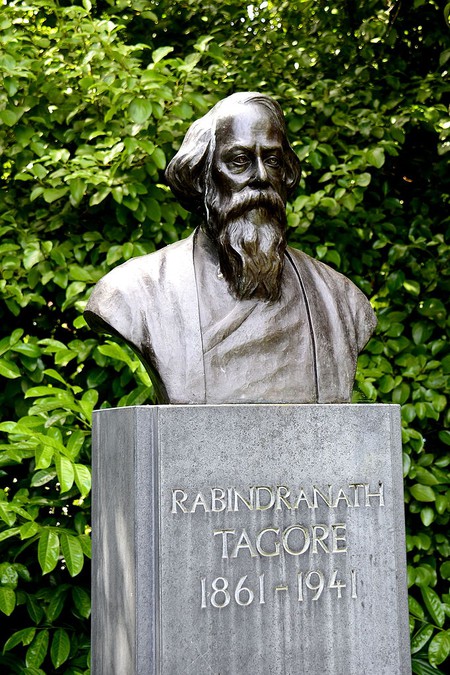 Despite the wide gamut of his literary feats, it is astonishing to realize how narrowly he has been portrayed in the West, limiting him to ‘the great mystic from the East.’ Yeats was not entirely hazed to identify with a lingering religious thread in Tagore’s writing. His verses explore the realms of life and death. He lives a romantic relationship with the Supreme – a notion of a blissful and an absolute fearless equation with God. Many of his religious reflections, including Gitanjali, exemplify a confluence of India’s vast volumes of ancient wisdom and the popular and newer poetries. The original translation of his work mars the simplicity of his verses; however, the most basic form of humanity still shines through, and much better than any form of complex spiritual discourse:

‘Leave this chanting and singing and telling of beads! Whom dost thou worship in this lonely dark corner of a temple with doors all shut?
Open thine eyes and see thy God is not before thee!
He is there where the tiller is tilling the hard ground and where the pathmaker is breaking stones.
He is with them in sun and in shower, and his garment is covered with dust.’

It is easy to get lost in the imageries his poems spin. There is a sense of ambiguity – this is the charm of experiencing Tagore’s literature. This is particularly true about his poems that use descriptions of human love and those of pious devotion, completely entwined in a thread of metaphors.

‘I have no sleep to-night. Ever and again I open my door and look out on the darkness, my friend!
I can see nothing before me. I wonder where lies thy path!
By what dim shore of the ink-black river, by what far edge of the frowning forest, through what mazy depth of gloom, art thou threading thy course to come to see me, my friend?’

Tagore’s ruminations over the events at the turn of the century are hard to miss. He stood strongly against the British Raj and wrote extensively for freedom. But what have often been missed are his assertions on unshackling the self from chains that are beyond the British rule. Perhaps what was essential to him was that people be able to live, and reason, in freedom.

‘Where the mind is without fear
and the head is held high;
Where knowledge is free;
Where the world has not been
broken up into fragments
by narrow domestic walls; …
Where the clear stream of reason
has not lost its way into the
dreary desert sand of dead habit; …
Into that heaven of freedom,
my Father, let my country awake’

As much as the freedom movement had him involved, he had his inhibitions about patriotism. He argued the limiting nature of patriotism – preventing the engagement of ideas from outside ‘narrow domestic walls.’ Tagore’s desire for freedom brought forth his firm disapproval of unbridled, emotional traditionalism that would make one a prisoner of the past – ‘lost… in the dreary desert sand of dead habit.’ 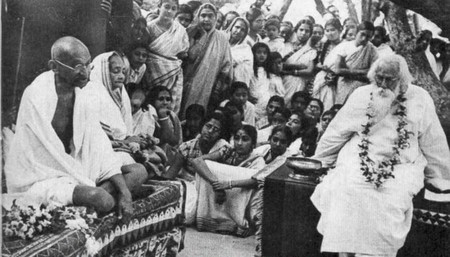 He resented the British oppression and, in 1919, gave up the Knighthood that was bestowed upon him. His criticism of the British administration of India grew only stronger over the years, and it was befitting how his song Jana Gana Mana was chosen as the national anthem. Tagore is the only one to have penned the national anthem for two nations – as Bangladesh would later take Amar Sonar Bangla as its national anthem. And his words in poetry and prose reverberated for a freedom of thought, an expression which is not caged in monotones of authority and painted in single colors. His words probably have never been as relevant as they are today:

‘The last sun of the century sets amidst the blood-red clouds of the West and the whirlwind of hatred. The naked passion of self-love of Nations, in its drunken delirium of greed, is dancing to the clash of steel and the howling verses of vengeance. The hungry self of the Nation shall burst in a violence of fury from its shameless feeding …’
By Rajan Luthra

Rajan studies semiotics and cultures to build and market brands for a living, and dabbles in prose, poetry, paints and palettes for a life. He usually scribbles at http://www.luthrarajan.blogspot.in/