Poetry In Stone: The Ambernath Temple

Mumbai is a city that always reveals some hidden pearls. This article traces one such interesting place — the classical temple of Ambernath. 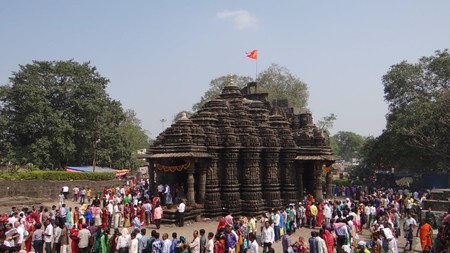 The island city has long been of importance as an ancient Buddhist meditation site (Viharas) at Kanheri (where newer caves were discovered just recently). There are pointers to the city’s location, where the Ulhas River meets the sea, flowing down from the ancient port of Kalyan, now a major railway junction. Just a few stops ahead on the railway is the Ambernath station. To many, Ambernath is just another stop on the way to Karjat, a satellite suburb on the outskirts of Mumbai’s metropolitan area; however, this suburb is also home to a Shiva temple, far outdating Mumbai’s timeline.

The Shiva temple at Ambernath is built in classical style by the Shilahara king Chittaraja, later renovated by his son Mumunni in 1060 AD. This is mentioned in an inscription engraved on the northern porch lintel of the temple. The Shilahara kings started out as vassals of the Rashtrakutas in the Konkan region, with the mighty Chalukya kingdom to the south. The Shiva temple at Ambernath is located just a few miles away from the ancient trade route that leads right up to the Deccan plateau. 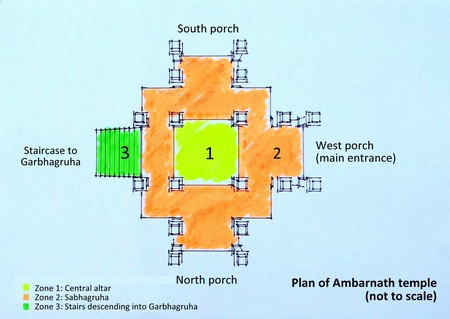 Laid out on a cruciform plan, it is an interesting confluence of architectural styles showing both the Chalukyan influence as well as features from Gujarat’s Solanki style of architecture. Stylistically, the temple is ‘Bhumija,’ a term that refers to the style of the spire. Eminent Indologist Stella Kramrisch has drawn parallels between the Kanderaya Mahadev temple at Khajuraho and the Ambernath temple in her seminal book, The Hindu Temple. 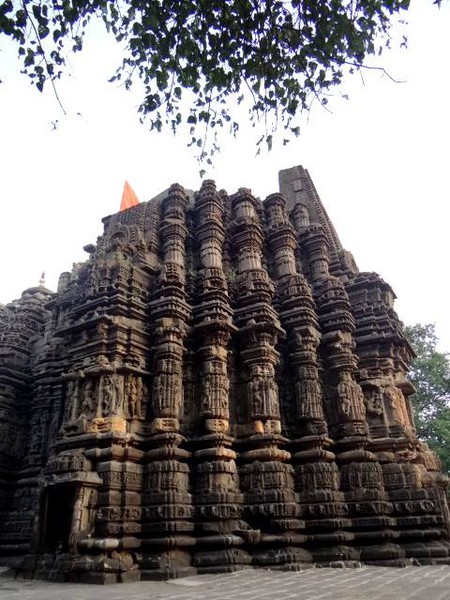 The temple has no central spire today, but remains of the spire have been excavated. Even without the spire, the temple rises to up to 21 meters high. The main entrance is from the western porch where two Nandis (bulls) stand guard. There are two more porches — one each on the north and east side. The outer wall is fluted to accommodate as many sculptures as possible in the cardinal niches — the most unique of which is the Hari-Hara-Pitamaha-Surya adorning the eastern wall as a centerpiece and portraying Shiva, Vishnu, Brahma and Surya together. 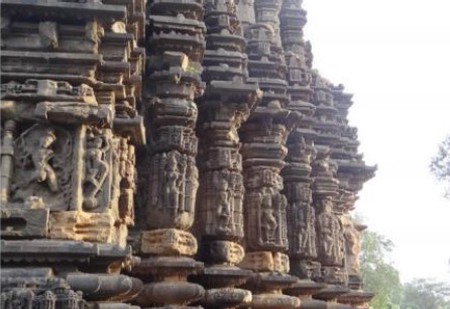 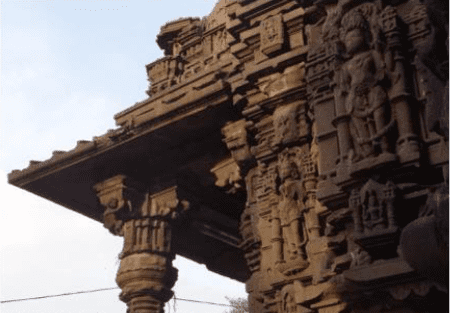 The Sabhagruha has a central raised altar, bound by four pillars topped by a richly carved trabeate dome. The rest of the Sabhagruha is occupied by 14 pillars, each with a ornamental Ghatakam and detailed Dhaarvahakas (load-bearing supports). The height of the pillars ranges from 10-12 feet with the ceiling rising up to 14 feet. The Garbhagruha (sanctum sanctorum) is a subterranean chamber and can be accessed by climbing down a flight of steps. The sanctum is a neat square with the ceiling rising high above it. Owing to the fallen spire, it is open to the skies and houses two ‘Shiv Linga’s. 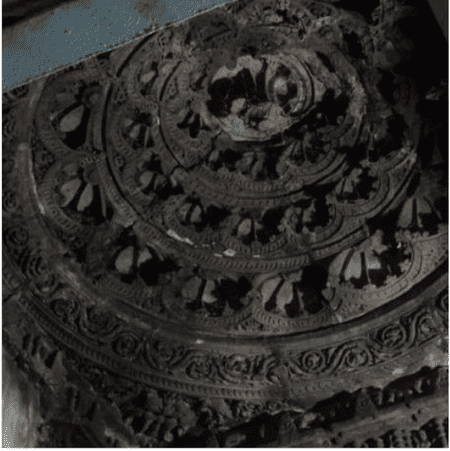 The stepped and faceted outer wall houses lots of sculptures that are a treat to identify. (Tip: Always look for the Vahaka or the carrier to identify a sculpture!) The temple is held up by a layer of about 250 elephants called ‘Gaj-thar,’ literally meaning ‘a layer of elephants.’ The layer above it houses about 70 Mithuna, Shrungara sculptures. Just outside the north porch is a smaller temple, adjoining the super-structure. The entire temple surroundings measure 50 meters by 35 meters with a small stream to the west. It is a centrally protected monument and lies within the care of Archaeological Survey of India Mumbai circle. 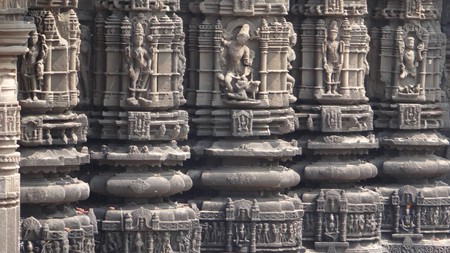 Owing to its ‘Hemadpanthi’ origins, the temple was built using male-female blocks of stone, and no mortar was used. Over the years, the structure has weakened, almost tilted and is slipping away in places. Owing to this, reinforcing iron beams have been erected inside the Sabhagruha to strengthen the structure. 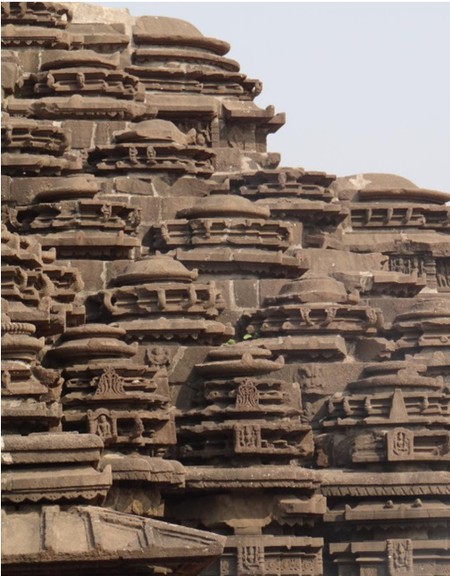 Details on the roof | © Shashank Sawant

The British Raj and Rediscovery

Earliest available photographs of the temple taken around 1850 AD by Henry Cousens, the then Superintendent of the Archaeological Survey of India, show its dilapidated state with trees growing from the walls of the structure. As one of its pilot projects, the ASI took up detailed documentation of the temple and carried out some conservation work. Thus, the temple that was lost for around 800 years between 1060 AD and 1850 AD was slowly rediscovered.

Members of the British Raj romanticize it wonderfully, as one Captain Lyon, 1871 (Late of Her Majesty’s 68th Regiment of Light Infantry):

Ambernath of today shows a completely different picture. The suburb houses a large working-class population. The local Patils manage the temple well, though the stream next to the temple is often full of effluents from nearby industrial estates. Conservation and beautification efforts from ASI are on to ensure that this poetry set in stone endures this age too. Even today, while taking a leisurely stroll around the temple, one has to be reminded that Mumbai is just a stone’s throw away. And on days when the crowds are absent, it is not hard to imagine the temple as a source of religious contemplation for the Shilahara kings and their subjects, a whole millennium ago. 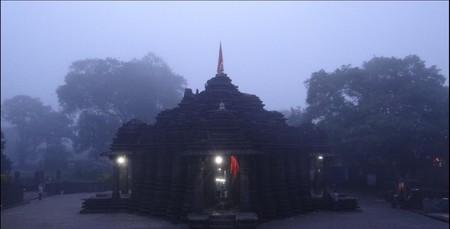 Central Railways runs hourly trains to Karjat (S) and Ambernath (A). On getting down on the East side, one can catch a share rickshaw, which drops you off at the temple itself.