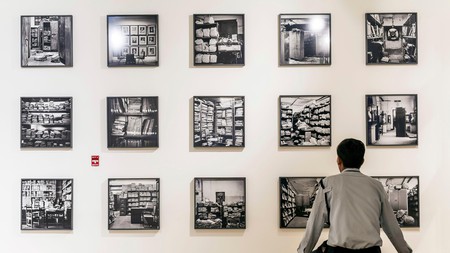 India’s capital, New Delhi, is a contemporary art destination with a rich gallery scene. Classic treasures abound throughout the city, but where should you start? A specialist from Sotheby’s helps to create a guide to the city’s must-see pieces.

Ever since it gained independence from Britain in 1947, India has established itself as an important player on the global art market. Bombay Progressive Artists’ Group helped usher in a new postcolonial era for the country, while Dhoomimal Gallery, the first private art gallery in New Delhi, was an antecedent to the National Gallery of Modern Art, which opened in 1954.

Manjari Sihare-Sutin, head of modern and contemporary South Asian art at Sotheby’s, put together this list of the unmissable but less well-known treasures that can be found in New Delhi, many of which can be found in unanticipated locations such as government buildings and shopping malls. “Jewels in the crown of a great city, these three-dimensional riches don’t just occupy space but also time. Together they document the history of the making of a great nation, spanning almost two millennia,” she says.

‘The Dancing Girl of Mohenjo-Daro’

Found in the ruins of Mohenjo Daro, an archaeological site in Pakistan, The Dancing Girl of Mohenjo-Daro is a 10-centimetre (four-inch) bronze sculpture depicting a posing young girl. She has one hand akimbo and one long arm reaching down her leg. It is an artefact of the South Asian Bronze Era Indus Valley Civilisation. Although ownership is disputed with Pakistan, the statue is housed in the National Museum of India. Discovered by British archaeologist Ernest Mackay in 1926, the statue is believed to be from around 2300 to 1750 BCE and to originate from one of the earliest ever human cities. 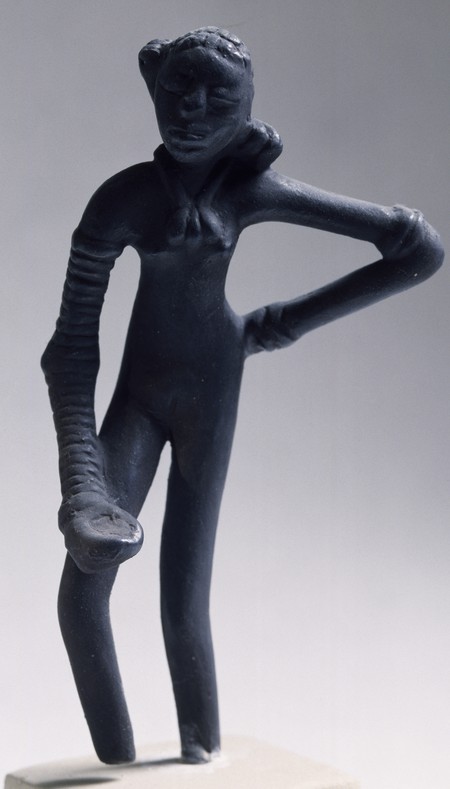 In 1930, Mahatma Gandhi led the Salt Protest, a 24-day march that was an act of non-violent civil disobedience against the oppressive British taxation of salt. Gyarah Murti, also called Dandi March, is a set of 11 statues that pays tribute to Indian freedom fighters and social reformers. It was created by Devi Prasad Roy Choudhary, sculptor, painter and founder-chairman of the Lalit Kala Akademi, India’s national academy of fine arts. Choudhury is one of India’s most important modern artists and his bronze sculptures decorate the country’s landscape. This one is located at the T-junction on Sardar Patel Marg where roads lead to Willingdon Crescent and Teen Murti House. Sihare-Sutin calls it “pure poetry in tone”. 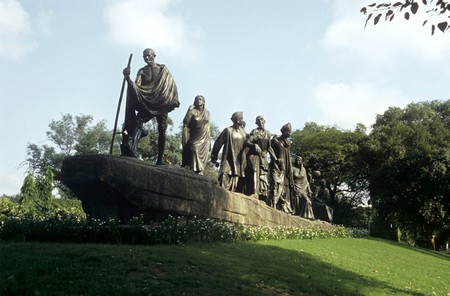 A key figure in the Contextual Modernism movement, Ramkinkar Baij is known for his larger-than-life outdoor concrete statues. Sihare-Sutin chose to highlight Yaksha and Yakshi, two monumental sculptures made of sandstone found at Baijnath in the Kullu Valley of Himachal Pradesh, which can be found standing guard outside the Reserve Bank of India Building on Sansad Marg. She refers to his work as “on the vanguard of modern Indian sculpture”. A yakshi is a female earth spirit and a symbol of fertility for the Hindu, Buddhist and Jain faiths, according to the Art Institute of Chicago, and yaksha is the name of a broad class of nature spirits who oversee the natural treasures hidden in the earth. Since his statues were commissioned by and for a bank, Baij decided to have some fun with them, saying, “My Yaksha is completely modern – with a machine and a money bag.”

Satish Gujral is a painter, sculptor and muralist who came to art after he became deaf following an accident as a child. Now, at age 94, he is a nationally recognised influence whose career was celebrated with a 2016 retrospective at the Indira Gandhi National Centre for the Arts. In 1976, his mural at the Delhi High Court premiered, a stone sculpture that adheres to his unified aesthetic. Four years later, he installed a mural at the World Trade Centre that hinted at the influence of his mentors, artists Diego Rivera and David Alfaro Siqueiros.

In addition to the aforementioned pieces of public art, Sihare-Sutin recommends a visit to the Kiran Nadar Museum of Art (KNMA). She says it has, “one of the largest privately held collections of South Asian Contemporary Art in Saket and Noida”. KNMA became India’s first private museum of art exhibiting modern and contemporary works when it opened in 2010. Its permanent collection mostly focusses on post-independence 20th-century painters, though the large museum space has also held retrospectives of important Indian artists such as Nalini Malani, Rameshwar Broota and Dayanita Singh.

Sihare-Sutin also mentions that “some of the five-star hotels, such as the Maurya Sheraton (Sardar Patel Marg), Hyatt Hotel (Bikaji Gama Place) and the Oberoi (Dr Zakir Husain Marg) hold some stunning paintings and sculptures”. 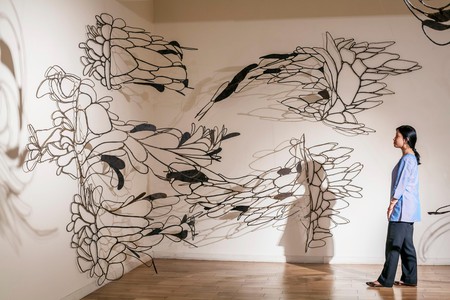