10 Of The Best Restaurants In Mumbai

Mumbai offers a culinary scene full of rich and delicious flavors. Here’s our guide to 10 of the best restaurants, pop-ups and homes that offer an unforgettable experience of local cuisine and traditional meals in Mumbai. 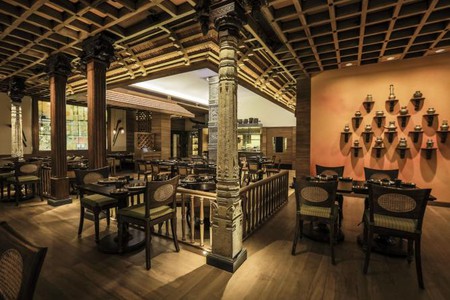 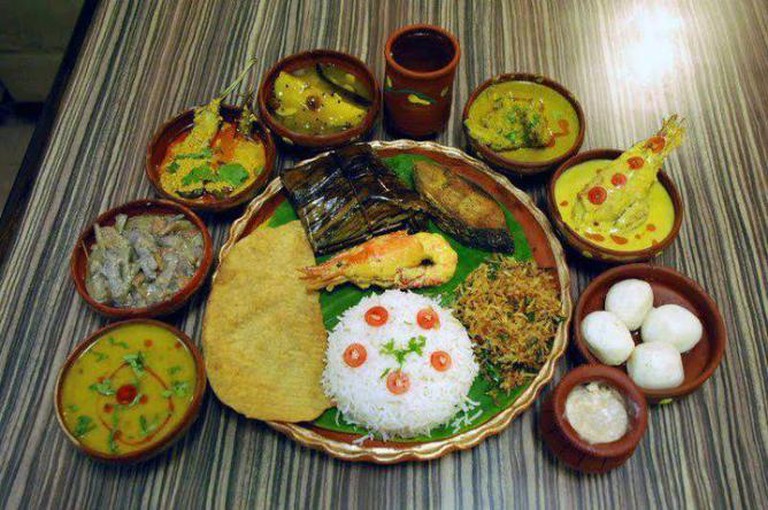 Traditional Bengali Fish full meal | © Nandinissaha/WikiCommons
The Konkan Cafe specializes in cuisines from the coastal regions, using seafood, coconut and rice in its delicious dishes. The menu also includes Mangalorean, South Indian and Goan dishes. Preparations of rawas and curdee mango with East Indian spices are served, as well as regional breakfasts that are rarely found outside a home kitchen. Dishes such as ramasseri idlis from Palghat and the cylindrical rice puttu from the south are also delicious. The restaurant is set up to replicate a Kerelan courtyard house with an open veranda and a courtyard under the sky. It also boasts beautiful carved rosewood panels from South Indian temples and mosaic flooring.
Open In Google Maps
Ganesh Murti Nagar, Cuffe Parade Mumbai, Maharashtra, 400005, India
+912266650808
Visit Website
Give us feedback

Kailash Parbat is the place to visit for North Indian and Mumbai street food served in a restaurant. They offer a variety of chaats – a savory mix of crisp, fried pancakes with assorted chutneys and vegetables. They also serve a classic Mumbai bhel – a snack that uses puffed rice and chickpea flour noodles, as well as sweet tamarind chutneys, spicy red chutneys and garnishes.

The Calcutta Club has cafeteria-style decor, with vintage sepia colors and photographs of Bengali actors and actress on the walls. Known for their Bengali cuisine that uses a 5-spice mixture called panchphoran and ground mustard and mustard oil, the venue serves up some truly flavorsome dishes. They use rui and hilsa from the lakes and rivers in the city, and are also known for their tasty vegetable combinations.

Restaurant, Irish, Indian, Vegetarian, $$$
Facebook
Email
Twitter
Pinterest
Copy link
Share
Map View
Brittania and Company has all the usual trappings of an Irani restaurant – beige and ivory coloring, checkered tablecloths and large whirring ceiling fans. The restaurant was opened in the early 1920s, by the Kohinoors, and is now being run by the third generation of the family. They serve the cuisine of the Parsi and Irani peoples who migrated from Iran to India during the 19th century. Brittania is renowned for its berry rice pulav, dhansak (lamb pieces in dhal), and sali boti (lamb with potato straws). The beverage of choice is the raspberry soda, rarely available at other city restaurants.
Open In Google Maps
Neville House 1st Floor Currimbhoy Road, Ballard Estate,, Ballard Estate, Maharashtra Mumbai, 4000, India
+2230008585
Give us feedback

Mumbai has recently seen a growing trend of pop-up kitchens, where individuals or families invite guests to enjoy a traditional home meal. Among these is Poppadum, which serves authentic South Indian food. Run by economist Sneha Nair, the meal usually includes a range of dishes placed on a banana leaf. Kerelan cuisine uses rice, coconut, milk and palm sugar. Choose a variety of seafood, chicken or lamb, as well as dishes of fruit and vegetables, or bananas and pineapples. Stews and curries are served with appam – delicious steamed rice pancakes that are healthy and light.

Considered an experimental lunch concept, The Bohri Kitchen is run by the Kapadia family, who invites guests to experience a traditional Bohri meal in their home. The Bohris are a group of Shia Muslims, many of whom migrated from Yemen to India during the 16th century. The dishes they serve are delicious; guests sit together around a large thaal, a round metal plate upon which the various dishes are placed.

Kolis are supposedly the original inhabitants of the seven islands that Mumbai used to consist of. They are a coastal people, and their cuisine features freshly caught seafood. These days their specialties are available in very few places. Versova village hosts a well-attended annual culinary festival. This festival includes cultural programs, dance and music, and dishes of a variety of seafood with traditional masalas.

Though originally Bihari, Dolly Singh has traveled to and lived in various parts of India, gaining familiarity with several regional cuisines. She is an experienced media professional, who also loves catering, and runs The Home Cafe as a pop-up venue. She specializes in both Bihari and Bengali cuisine. A Bengali meal at The Home Cafe might include rice and lentils or shukto – vegetable sides and varied dishes made with Bengali freshwater produce including rui and hilsa. A Bihari dish might include litti – a disc made from wheat and chickpea flour with a masala filling, spiced vegetable fritters and curries with traditional seasonings.

Golden Star Thali serves thali – portions of several separate dishes, with traditional delicacies from Rajasthan and Gujarat. Visitors cannot have more than the stipulated dishes, but servers will top up your thali as often as you like. A typical thali might contain flatbreads, a roulade made from chickpea flour and buttermilk, a mix of rice and lentils, and a mix of seasonal vegetables in a spiced curd and coconut gravy. Due to the prominence of Jain and Buddhist religions in the area, both cuisines will typically be vegetarian.

Restaurant, Indian, Asian, Vegan, Vegetarian, Gluten-free, Halal, $$$
Facebook
Email
Twitter
Pinterest
Copy link
Share
Map View
The cuisine at Peshawri ITC is inspired by North West frontier traditions. These include varieties of roasted and grilled meats. They are delicately cooked on tandoors and clay ovens. The succulent meats are spiced at the start, and the chefs are able to gauge these flavors with delicate precision. The restaurant aims to recreate the atmosphere from which northwest cuisine arose. Its warm yellow colors and open kitchen evoke the setting of a frontier camp, full of friendship and camaraderie.
Open In Google Maps
Ashok Nagar, Andheri East Mumbai, Maharashtra, 400099, India
+912228303030
Visit Website
Give us feedback
Give us feedback