In the exhibition India: Jewels that Enchanted the World, the Moscow Kremlin Museum takes a journey through the last 500 years of India’s turbulent history. Through a collection of over 300 jeweled items loaned by museums worldwide, the exhibition tells a story that encompasses beauty, murder and the rise and fall of empires. We take a look at the exhibition and the profound history, meaning and design of Indian jewelry. 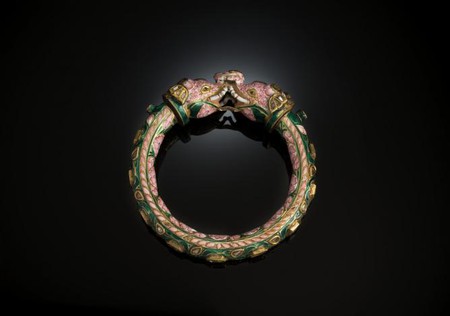 Like tea cultivation and courtly dance rituals, jewelry has been an integral part of life on the Indian sub-continent for thousands of years. But as the Moscow Kremlin Museum’s exhibition India: Jewels that Enchanted the World reveals, Indian jewelry was used in infinitely more complex ways than as mere decoration: it functioned as social signifier, insurance policy, talisman, diplomatic calling card and, sometimes, a means and motive to murder. The history of jewelry in India is, to a large extent, the history of the country itself.

The story of India’s fascination with precious ornamentation begins 5000 years ago in the Indus Valley, at the time that the Hindu epics the Ramayana and Mahabharata were written. The majority of decorative pieces from this early period were made not from metal but from stone beads strung together in basic configurations. Yet despite the relative simplicity of these early pieces, Indian jewelry was about to become much more complex in its style and signification. 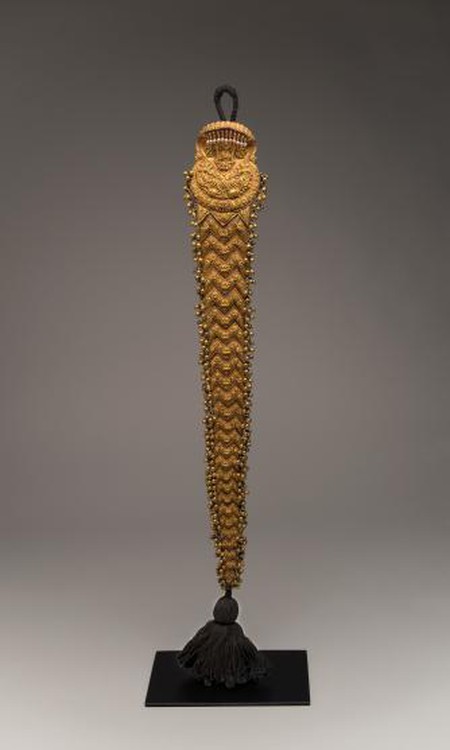 With the arrival of the Mughal emperors in the 16th century, the so-called Golden Age of Indian jewelry began. The Mughals, conquerors from Central Asia, brought with them both the technical knowledge required for gem-setting and the determination to cement their recently acquired power through extravagant displays of wealth. Precious metals and gems became a way to denote the Mughals’ divine right to rule and to indicate their unassailable social status. To this end they passed various Sumptuary Laws, decrees that limited the wearing of jewelry to the ruling classes, cementing jewelry’s high status in Indian society.

It was also common for jewelry during this period to include miniature representations of deities, like the temple pendants on show in India: Jewels that Enchanted the World, which feature tiny gods and goddesses set with rubies. Through representative pieces of this sort, Maharajahs were signifying their special relationship with gods and the mythic universe. This supernatural potency ascribed to jewelry is exemplified by the navaratna, an amulet set with nine types of precious stones which together symbolize the nine gods of the Hindu universe. In wearing the amulet a Maharjah was symbolizing his cosmic significance and perhaps even his equal-standing to the celestial powers. 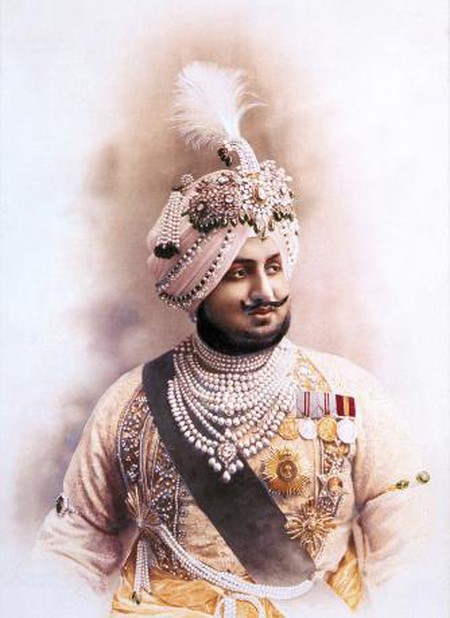 If there is one stone that encapsulates India’s complex relationship with jewels, and even the world’s relationship to India, then it is the diamond. First mined on the banks of the Godavari River near Hyderabad; from these early beginnings the diamond held a unique position in the Indian cultural imaginary. Hindus believed they were created when lightning struck rocks (hence their name vajra, which means thunderbolt in Sanskrit), the god Krishna presented his lover Radha with a diamond to reflect her beauty in the moonlight. The stones were thought to have the power to heal illness, ward off death in battle and to protect the wearer from snakes, fire, poison, thieves, floods and evil spirits. Even up until the 19th century, it was common for wealthy Indians to have their teeth dusted with diamond powder to prevent lightning strikes while supposedly repairing tooth decay. 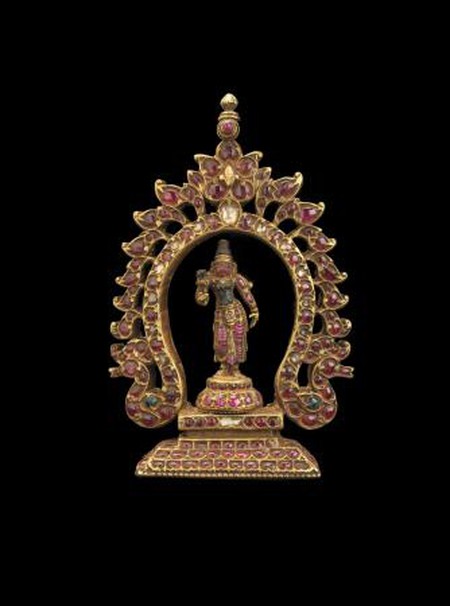 However, diamonds could also bring bad luck as well as good. The Koh-i-Noor, once the world’s largest diamond, was the cause and the spoil of numerous civil skirmishes in India before being “confiscated” by the British East India company in 1850 and presented to Queen Victoria as “the jewel in the crown,” symbolic of India’s subjugation under colonial rule. The Hope Diamond, which was stolen from an eye of a statue of the Hindu goddess Sita, is believed to be cursed, bringing death to all who touch the stone.

Diamonds have been used to bring about death in more direct ways in Indian history. William Crooke, a member of the Bengal Civil Service writing at the beginning of the 20th century, explained that diamond dust “is believed in South India to be at once the least painful, the most active and infallible of all poisons. It was kept as a last resort in times of danger.” Splintered diamond was rumoured to have been used in the murder of a Mughal official, who was poisoned by the fragments.

The belief in the metaphysical properties of precious stones and metal was not limited to diamonds, of course; gold and silver were also popularly thought to have symbolic meanings. Silver was associated with the moon, while gold symbolised the sun and immortality; the Vedic creation myth has human life emerging from a golden womb or egg. 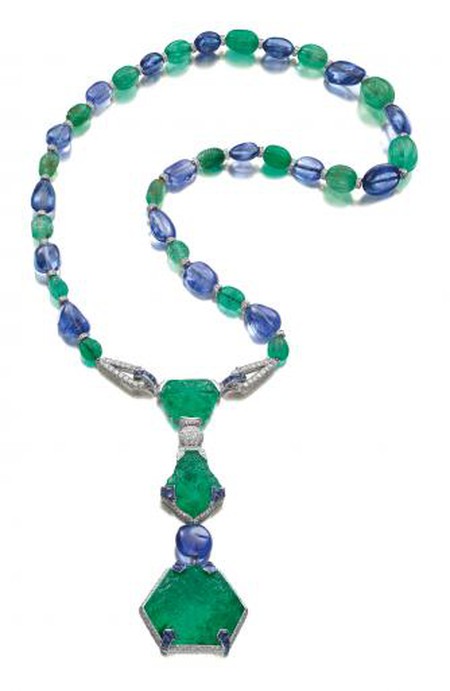 Jewelry has as many practical as spiritual or supernatural applications. Women, who were once barred from owning property by Indian law, relied on their jewelry as a sort of insurance policy in the event of divorce or widowhood. Even today, Indian women are given pieces of jewelry at seminal stages in their life, most notably when they marry and receive jewelry known as their stridhan, or “wealth of women.” A collection of stridhan from the Mughal era on show in Moscow shows the opulence of wedding jewelry – a necklace, headdress and earrings all set with rose-cut diamonds and pearls.

Part of the Kremlin Museum’s exhibition is dedicated to the late 19th and early 20th centuries, when Indian jewelry design began to absorb influences from colonial forces. Design evolved and the cultural narrative became yet more complex, as renowned European jewelers like Cartier began to create pieces for the maharajahs, setting Indian stones in India-influenced pieces made in Paris. Cross-cultural influence worked the other way too: Cartier’s famous ‘tutti frutti’ style was based on the floral motifs of South Indian jewelry, complete with sapphires, emeralds and rubies. 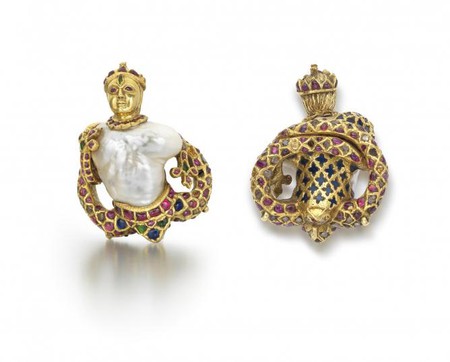 The Story of India’s Jewelry Continues

India: Jewels that Enchanted the World ends by looking at the contemporary pieces being created today in the sub-continent. Techniques and traditions dating back to the time of the Mughals are still apparent today, handed down generation to generation by families of craftsmen. These craftsmen are considered important enough to transcend India’s caste system: instead of being defined by their place or status of birth, jewelry makers all over India are said to belong to the Vishwakarma caste, a term derived from the divine architect in Hindu mythology. As often as jewelry has been the catalyst for change in the last 500 years of Indian history, in many ways it also forms an unbroken link with the country’s past.

India: Jewels that Enchanted the World will be on show at the Moscow Kremlin Museum between 12 April and 27 July 2014.