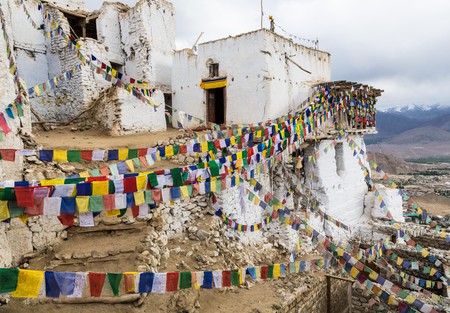 Among the heirlooms, jewellery, artefacts and photographs that fill the compact rooms of Stok Palace’s little museum, there is one particularly enigmatic exhibit. It may have been forged as a regular Medieval sword but, unlike any other you’ve seen before, this one is now bizarrely knotted.

Here in the Himalayan region of Ladakh, India’s so-called ‘Little Tibet’, one might be forgiven for thinking the crisp, thin air is playing tricks, muddying cognition and dulling perception. But no, the gleaming blade really is twisted into a single knot, and, according to local guide Rinchen Dorjay, it’s all because of the oracle.

Ladakh’s royal Namgyal Dynasty dates at least as far back as the 1400s, and maintaining power against a backdrop of tough neighbours – Tibetan warriors, Central Asian marauders, Kashmiri invaders and conquering Sikhs – required guile, arms and diplomacy. And every so often oracles, too, were there to lend advice, read the runes and perhaps tame or channel some malevolent spirit.

In the mid-1500s, so the story goes, King Tashi Namgyal desperately needed an heir, male or female. The royal oracle at Stok proved wanting, so the king looked to another based in nearby Matho Monastery. In a demonstration of supernatural power, the oracle promptly knotted the king’s sword. Soon afterwards, an heir (possibly born to the elder brother he’d already blinded and exiled) was born, and the dynasty’s endurance was assured.

“In the oral telling of this event,” explained Rinchen, “that deed is often attributed to Stok’s oracle… but it was actually Matho’s.” Perhaps since that incident, Matho’s oracles have been the most esteemed in Ladakh, and even today the monastery near Leh hosts an annual ‘oracle festival’. Having carefully fasted and meditated for months, a pair of monks become spirit-receptacles and, in their heightened state, can reputedly cut themselves with knives or stroll the monastery’s lofty parapets blindfolded without ill-effect.

Sometimes referred to as faith-healers or even shamans, oracles remain a popular aspect of Ladakhi life. They draw on long-standing aspects of Tibetan Buddhism: even independent Tibet had a state oracle (based in a monastery on the edge of Lhasa) with whom lamas including the Dalai Lama would regularly consult. 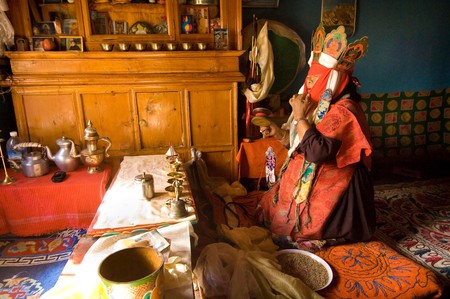 Choklamsar lhamo, or oracle of the Tibetan refugees village of Choklamsar, is just one of the oracles in Leh | © Hemis / Alamy Stock Photo

Traditionally there are so-called ‘village oracles’ and ‘monastic oracles’. While the latter deal with community matters and are generally accorded more prestige, the former offer individual consultations. Anecdotally, the phenomenon appears to be increasing among both Ladakh’s Buddhists and Muslims, and with more lha-mo (female) than lha-pa (male) oracles offering divination and curing.

Ayu Lha-mo, a diminutive lady who looks to be in her seventies, lives in Sabu village near Leh. There are perhaps a hundred or more village oracles like her scattered across the region, but according to Rinchen she is among the best known and respected. “She’s almost like a grandmother to me, too,” he added, earnestly arriving outside her modest-looking home.

Standing alongside it is a kind of consulting room, small and unglamorous with plain windows, a low cushioned bench or two and a kind of altar facing a much smaller shrine-alcove. Other clients have already arrived: a Ladakhi man, a Japanese backpacker and a Western tourist (for both of whom Rinchen also translated). Generally, her visitors seek cures or answers to troubling ailments, maladies, emotional upheavals or distress – but if they simply just seek a blessing, that’s fine, too.

Ayu Lha-mo dons her ritual garments including a crown fronted with five subtly coloured and pointed ‘petals’ depicting the five meditative Buddhas (symbolic of the five elements), a short brocade cape and a ritual dagger.

Tying a burgundy cloth around her mouth and chin, she begins chanting monotonously while swaying back and forth. Occasionally, her strong steady voice changes abruptly to resemble the eerie whinnying of a horse; she flicks water from a vessel onto the altar, and incense and aromatic seeds into a charcoal brazier. After around thirty minutes, Rinchen announces she is ready, and it’s immediately clear these consultations are not at all private.

The Ladakhi man speaks first – he feels really out of sorts, just can’t think clearly any more, and things – especially a business venture – are not going well. Ayu Lha-mo leans over and places what resembles a straw-like metal tube on his wrist. She sucks hard he gives a sharp yelp-like intake of breath while his body momentarily twitches. She promptly spits into a bowl of ashes while he stares at his hand almost as though he’s never seen it before. Silence.

The Japanese youth goes next in faltering English. His eyes have been bothering him for months following an accident; he’s tried ointments and cleansing, but the problem has persisted. She speaks tenderly, as though to a child. “I think you need to see a good doctor… don’t delay, eyes are precious.” If he’s disappointed at the almost banal common sense of her advice, he doesn’t show it.

Now it’s the Westerner’s turn – he hesitates and stammers as though labouring under some great burden.

“It’s a dream, quite a regular dream, where I’ve done something bad, really quite terrible, criminal actually,” he begins. “The exact situation’s a bit vague, and there’re no identifiable individuals involved. Although I’ve covered my tracks, the authorities are onto me, and I’m very probably going to be caught.” He adds that he’d invariably awaken with short-lived but acute anxiety that quickly turned to puzzlement.

Ayu Lha-mo asks him to hang his head over the brazier, its juniper sprigs unfurling mesmerising tendrils of curling aromatic smoke. She recites prayers and taps the back of his neck with her dagger.

“There are many good things about you which you fail to recognise,” she says. “What has happened is all in the past and not worth worrying over now.” He nods slowly. The implication is clear. When a Tibetan Buddhist speaks of the past, it is not necessarily last year or the one before or even distant childhood; it’s often another life.

To thwart his dream’s return “for at least a year,” she gives him a blessing and a small packet of sanctified rice grains wrapped in newspaper to take home.

Stepping back into the dazzling sunshine, Rinchen explains he, too, has consulted her many times. It worked for him. “I’m a believer,” he says solemnly.