Hailing from a Himalayan village in Northern India, one particular athlete is preparing himself for his sixth and final Olympic Games. But this Olympian is a relative unknown in his home country, let alone the rest of the world.

PyeongChang, South Korea, plays host to the 2018 Winter Olympics, and when the tournament begins in February next year the usual assortment of Norwegians, Canadians, Americans and Alpine Europeans will be competing at the top of the medals table. Among those established winter sport stars, however, will also be an Indian athlete, standing alone and flying the flag for his nation and sport.

Luge, for the uninitiated, sees athletes launch themselves down a slick ice track (like bobsleigh or skeleton bob), lying on their back on what appears to be a tray on skates. Riders can compete on their own or as a pair, but in either discipline the speeds reached – up to 140 kph (87 mph) – are utterly terrifying. If all that wasn’t dangerous enough, the luge itself has no brakes. The sport made its debut at the Olympics in Innsbruck, Austria in 1964 and has remained a constant ever since.

Shiva Keshavan is seen preparing for luge training in Manali, in the Indian state of Himachal Pradesh on March 15, 2017.

Innsbruck was also the place that Shiva Keshavan discovered luge. As a 15-year-old, he was invited to a training camp following a worldwide scouting mission to find promising athletes and, after trying the sport, was immediately hooked. In the 21 years since, Keshavan has dominated the sport in Asia. At the Asian Luge Championships, he has picked up two bronze medals, four silvers and four golds. He has represented India at the Olympics five times and will be in South Korea next year. When he made his Olympic debut in Nagano in 1998, he became the youngest athlete ever to compete in luge at the Games.

While there are parts of India that never see a single flake of snow, portions of the Himalayas straddle the north of India, meaning that areas high enough in altitude see snow throughout the winter. Those conditions may lend themselves to skiing or snowboarding, but luge requires a purpose-built track. Keshavan’s home village of Manali, in the state of Himachal Pradesh, sits at 2,500 metres (8,202 feet) in the Himalayas. Unfortunately for Keshavan, however, the village doesn’t have a track so he must use a luge with wheels, rather than skates, on the road. 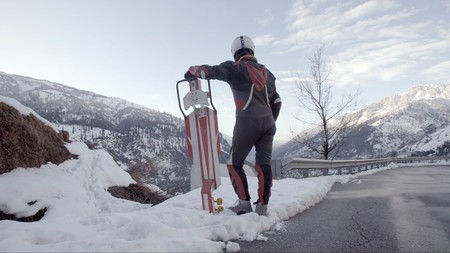 Shiva Keshavan is seen preparing for luge training in Manali, in the Indian state of Himachal Pradesh on March 15, 2017.

While Keshavan has been a champion in Asian competition, his five Olympic outings have yet to see him trouble the podium contenders. But then Keshavan can’t rely on funding in the same way that his European and North American rivals can. While many of those competing in luge, just like other Olympic sports, often receive financial backing through state programs, Keshavan has spent his career relying on crowdfunding and maintaining his own sponsors. All this allows him to not only have enough to live off, but also enough to pay for coaching and all the logistics that come with elite sport, such as travel, accommodation, equipment and the like, which, over his career, have proved difficult.

For the last two years, however, he has been coached by a legend within the sport, the USA’s Duncan Kennedy, a former luge athlete turned development coach. Their partnership has led to Keshavan’s excellent recent form and he is now hopeful of his most successful Olympic showing to date. At 36, PyeongChang looks set to be Keshavan’s final Olympics, but it could well be the crowning glory of an unheralded career and the leading light in Indian winter sports.