Fit as a fiddle and with a razor-sharp memory, 91-year-old Rama Khandwala, a former freedom fighter, has been deemed India’s oldest tour guide. Known affectionately as Rama Ben, she has been working as a tour guide for 50 years now, and her efforts and dedication have recently been honoured at the National Tourism Awards, where she received the ‘Best Special Tourist Guide’ award from the President of India. Keep reading to learn all about her incredible journey, from being a veteran freedom fighter to a veteran tour guide.

How did Rama Ben become a tour guide?

Born in Burma (now Myanmar) in 1926, Rama Ben’s story on becoming a tour guide dates back to India’s independence struggle, when Rama Ben served the country as a freedom fighter. Her family was associated with India’s Freedom Movement and her mother was a recruiting officer of the Rani Jhansi Regiment of Subhash Chandra Bose’s Indian National Army. So, the sense of patriotism and determination to serve the country has been instilled in her since childhood. In fact, it was her mother who made her and her sister join the INA.

She served as a second lieutenant in the regiment for two years. Post World War II, in 1946, her family migrated to Mumbai, where she worked multiple jobs. She worked as a nurse, a secretary and a Japanese language translator (she is well-versed in the language, thanks to her years in the INA). But she wasn’t too keen on these desk jobs. And, once she stumbled upon an advertisement about a government tour guide training program, which really excited her and she knew was her calling, she immediately signed up for it. And so her journey as a tour guide began!

She told mid-day in 2017, ‘I was a freedom fighter. I wanted to do something for the nation. Vallabhbhai Patel met me and told me to join politics, but I refused. I thought I can enhance the country’s image outside by being in this field.’ 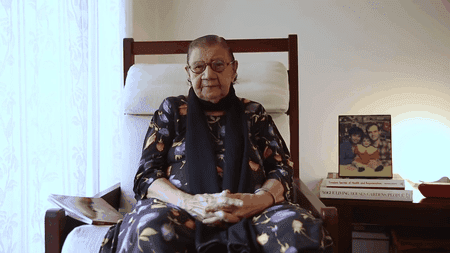 At 91, Rama Ben has been deemed the oldest tour guide in India | © Vodafone India / YouTube

Her extensive knowledge of tourist attractions, exuberant enthusiasm for the country and profound dedication to the profession makes her one of the best tour guides out there. She loves nothing more than showing guests her country and educating them about its history and culture. In an interview with mid-day, she said, ‘We will all go (die) one day, but the country will remain and if the country’s image is good, tourists will keep coming to India, saying it is a very good destination, it has very good people. So, while working as a tourist guide, always keep the country’s image in the forefront. Put your heart into work, make your tourists laugh and also laugh with them.’ This is the mantra Rama Ben has been following ever since she came into this field.