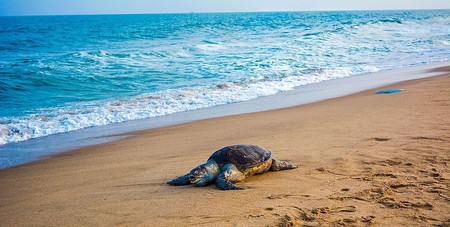 Every year, between October and April, Gahirmatha beach in Odisha becomes the nesting ground for Olive Ridley Turtles. These beautiful creatures are an endangered species, and this area is the world’s largest known rookery of the marine animals. Over 600,000 turtles come here together for nesting, but this area has not always been the safe haven for hatching that it is today.

According to the International Union for Conservation of Nature and Natural Resources (IUCN), Olive Ridley Turtles are classed as a “vulnerable” marine species. They derive their name from their heart-shaped, olive green-coloured shells. This mass nesting, popularly known as ‘arribada’ (a Spanish term used for en masse laying eggs by turtle species) is a yearly affair. More than 4,00,000 turtles come for nesting each year, each laying around 100–150 eggs in pits they dig up in the sand for this purpose. It takes around 45–60 days to for the eggs to hatch; the hatchlings, around 60,000,000 in number, brave reptiles, predatory crabs, birds, hunters and poachers on their way to the water.

Only one in a thousand hatchlings survive. They take 25–30 years to reach maturity, and the females then return to the beach where they were born to lay their own eggs. 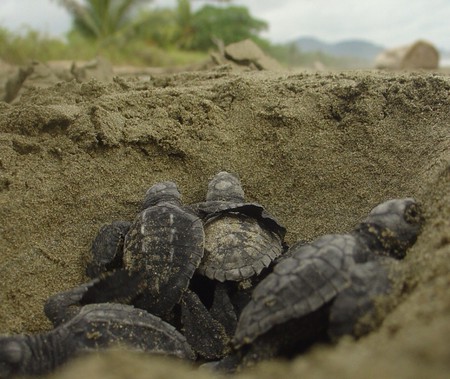 It has taken the efforts of a whole village to protect these species over the years. Fifty years ago, poverty was rife in the village – owing to the recurrent devastating cyclones – and the villagers collected the turtle eggs as food. Adult turtles were also captured for shipping to other states to be sold for their meat and shells. However, awareness campaigns gradually changed the mindset of the villagers slowly and steadily through the years.

When Doordarshan, India’s largest public service broadcaster, founded by the Government of India, covered this story in early 1990s, environmentalists were featured on the television, and people started respecting their words. Sensitization workshops were held. Awards and monetary benefits were introduced for protection of the turtles. Laws were enacted for illegal trawlers, poachers and fishers. Theatre shows, street performances and catchy songs in local language were made on this issue to attract the public, and ‘turtle clubs’ were introduced in local schools to teach the children about the importance of these animals.

Operation Kacchapa, launched in September 1998, played a major role in uniting the state government, the Government of India, the NGOs, the fisheries, the media and the locals toward reducing the turtle mortality rate. The villagers started taking pride in the fact that their village plays a major role in protecting these endangered creatures. 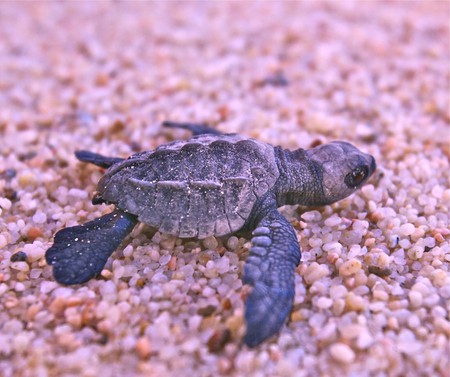 The turtles migrate from hundreds of kilometres for mating and nesting in this yearly breeding season, and every effort is made to try and ensure their mission is successful. The Odisha government imposed a 7-month ban on fishing from November 2017 to protect the turtles as per the Orissa Marine Fishing Regulation Act, 1982, and Wildlife Protection Act, 1972. Nets are put up along the length of the beach to prevent the hatchlings from accidentally heading to the land instead of the sea. The Rushikulya Sea Turtle Protection Committee and The Orissa Marine Resources Conservation Consortium work toward conservation of the Olive Ridley Turtles proactively through formation of monitoring units at nesting sites, conducting regular beach patrols and training of guards and volunteers. They also publish and distribute educational material, conduct field trips and promote exhibitions during beach festivals to sensitize the public on the issue through sculptures and sand art.

Many villagers are volunteers who are the go-to persons for fisheries, coast guards, forest departments, biologists, researchers and tourists. They have been involved in turtle protection works for decades. They know exactly when the turtles will arrive, the best places to view them, where not to tread to avoid trampling the eggs incubating under the sand and when to expect the hatchlings. May 23, World Turtle Day is celebrated in these villages as ‘Turtle ka Birthday,’ a reminder of the millions of hatchlings who have made it safely to the water from these shores. 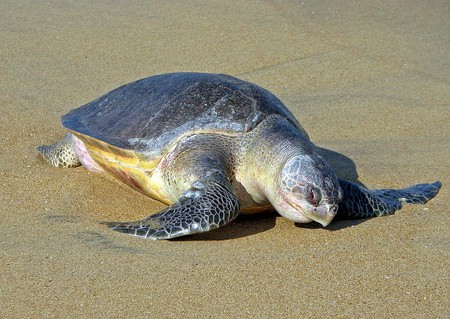 The numbers of the yearly arrival of Olive Ridley Turtles have gradually increased since 2000. The amazing sight of thousands of turtles stretched across the beach for kilometres leads to scientists, researchers and nature lovers from around the world thronging to Odisha’s Turtle Village to study the turtles and witness this beautiful phenomenon.