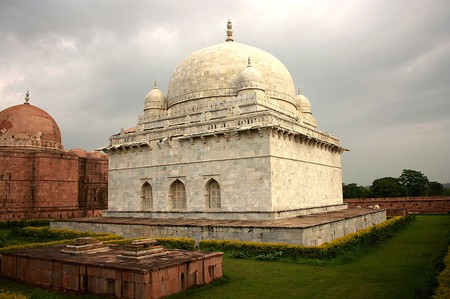 Nestled in the Dhar district of the central Indian state of Madhya Pradesh, atop the rugged Vindhya Range, Mandu is a treasure trove of ancient ruins that dates back to the 6th century. Crumbling into disrepair and wrapped in tales of romance from a bygone era, along with ruins of all sorts, from ornate palaces, tombs and mosques, to lakes and pavilions, this ancient town is waiting to be discovered.

Built in the 6th century by the Parmara rulers, Mandu, sometimes known as Mandavgarh, is a fortified town that was once famed as the “City of Joy.” Under the reign of the then-rulers, the town prospered and gained prominence in the 10th and 11th century. But today the town lies in ruins and exudes an unmistakable vibe of mystery and exotic beauty.

The town has seen the rule of several leaders, including Hindus, Mughals and Afghans, which gave this ancient town a distinctive architectural character. You’ll see many historic sites and monuments in Mandu that are a fascinating blend of Indo-Islamic architecture. Besides, there are structures of Afghan architectural style and patterns. 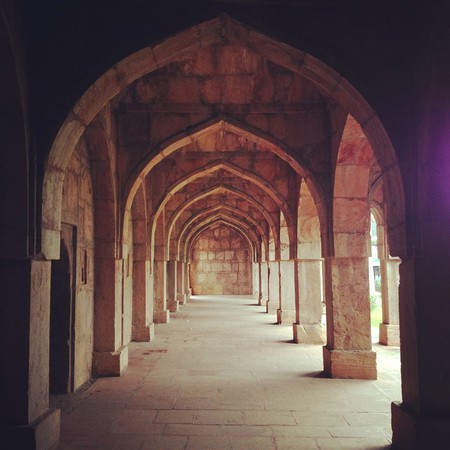 This medieval heritage site has a plethora of things to see and do, and can be comfortably explored on foot, or hire a bicycle and take a ride along its ruins.

Set on the banks of the Narmada River, the Roopmati Pavilion is a sandstone structure with a romantic backstory of a prince and his paramour. Prince Baz Bahadur was captivated by Rani Roopmati, a beautiful singer, and built this magnificent pavilion to show his love and devotion towards her. This pavilion offers panoramic views of the Nimar plains about 2,000 feet below, as well as the Narmada River. 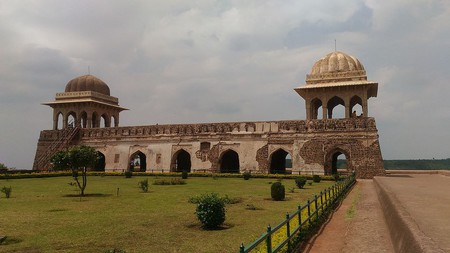 Just below the pavilion lies the Rewa Kund, a reservoir that supplied water to Roopmati’s Pavilion. Today it is considered a holy site. 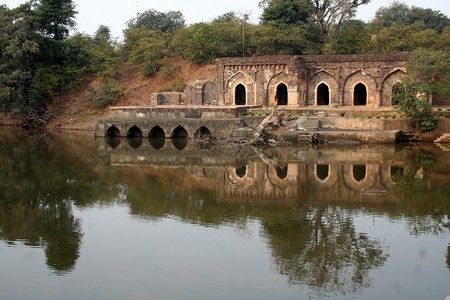 Just a short walk away from the Roopmati’s Pavilion lies the 16th century Baz Bahadur Palace. This two-story architectural masterpiece is a beautiful synthesis of Rajasthani patterns and Islamic architecture, and has a huge courtyard bordered with halls and a pond in the center, rooms with arched gates and high, open terraces offering a bird’s eye view of the town. 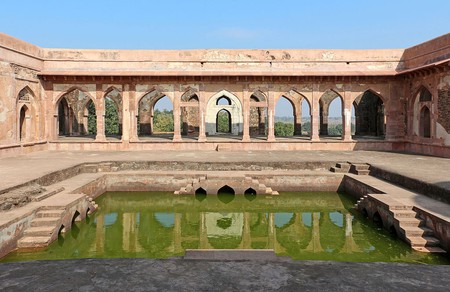 Also known as the Ship Palace, the Jahaz Mahal was built in the 15th century by Sultan Ghiyas-ud-din-Khilji. The Mahal got its name on account of its resemblance to a ship sailing in water. This two-story architectural marvel is nestled on two artificial lakes, Kapur Talao and Munj Talao, and is 400 feet long and 50 feet wide. It has a rectangular shape and comprises of three halls with numerous narrow rooms and royal baths, Gothic-style arched entrances, overhanging balconies, open pavilions, cascades and fountains. One of the striking features of this palace is during monsoons, the lakes are filled with water to the brim, and the palace seems to float like a ship. Stones and colored tiles decorate the palace. 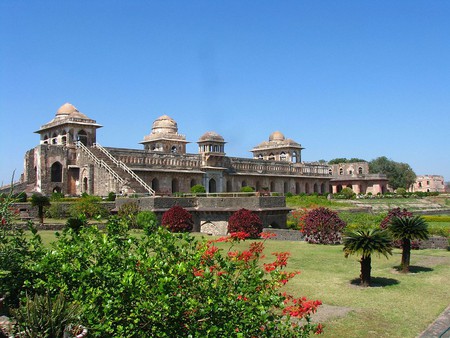 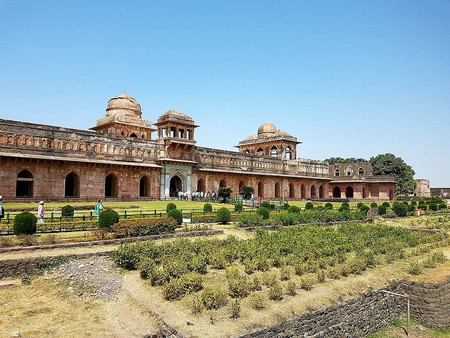 Adjacent to the Ship Palace lies the Taveli Mahal, which has now turned into a museum housing several archaeological findings. 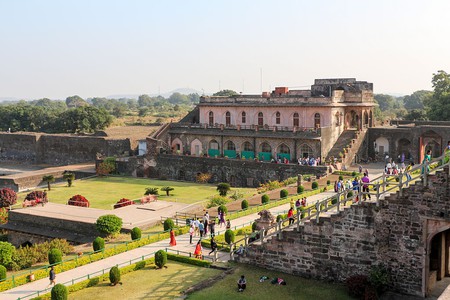 It is the first marble structure in India, and boasts an Afghan architectural style. It’s an imposing edifice with intricate marble trelliswork, red sandstone-pillared corridors, rectangular towers and amazingly-designed and perfectly-proportioned domes with tiny cupolas. One of the noteworthy features of this tomb is the casketed sarcophagus. This intricate detailing and design of the tomb served as an inspiration for the construction of the one of the Seven Wonders of the World: the Taj Mahal. This age-old tomb continues to be in a good condition. 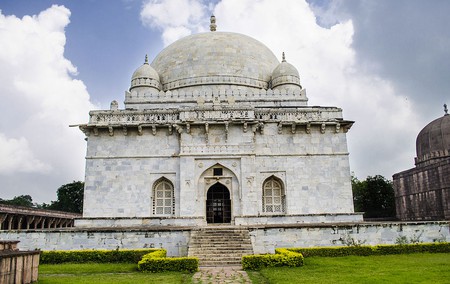 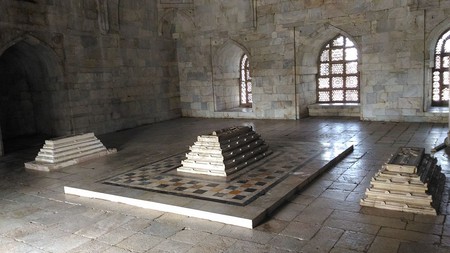 Jami Masjid is another artistic gem of Afghan architecture. The structure is considered to be modeled on the Umayyad Mosque in Damascus. It has three huge domes and around 58 small domes with arches and pillars, and though the color on the walls has faded over time, its artistic, aesthetic, and historic appeal still remains intact, making it worthy of attention. 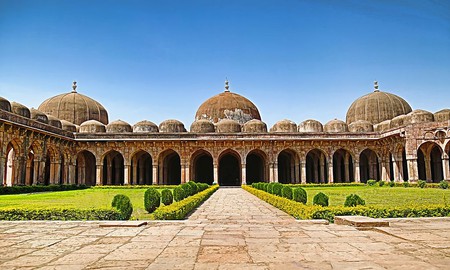 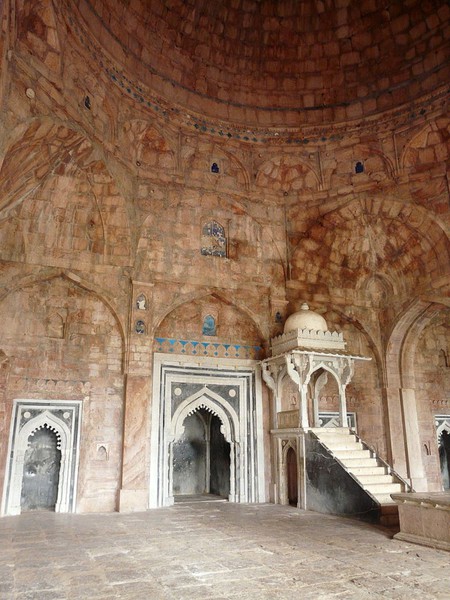 Literally meaning “Swing Palace,” the Hindola Mahal is a sandstone structure with sloping side walls, perhaps creating an impression of swaying. It’s an ancient engineering marvel that is testament to the town’s glorious past. 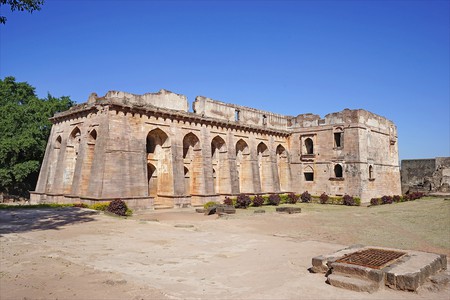 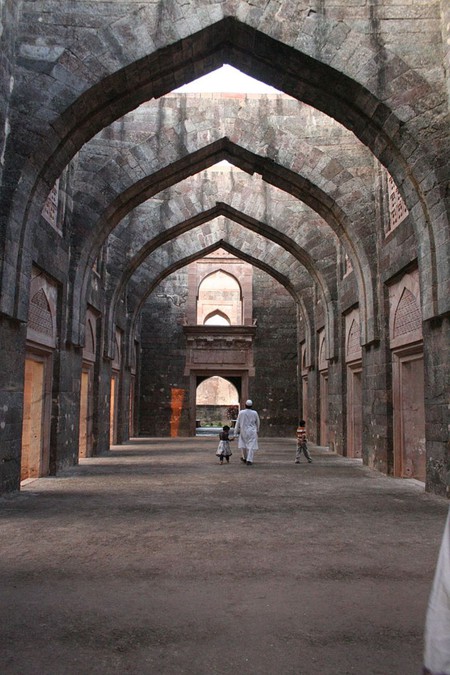 Besides all this, there are several other ancient structures, like the Champa Baodi (step-well) that has a Turkish architectural pattern, Jain Temple that houses statues of the Tirthankaras of the Jain religion partially made of gold and silver, Darya Khan’s Tomb that is set on a raised platform and adorned with intricate latticework, Bagh caves which are artificial caves embellished with beautiful paintings and murals, and the Neelkanth Mahal that is dedicated to Lord Shiva. Townsfolk visit the main room of the Neelkanth Mahal that is transformed into a temple and is adorned with Lord Shiva images and a Trishula (trident) to worship the Lord. 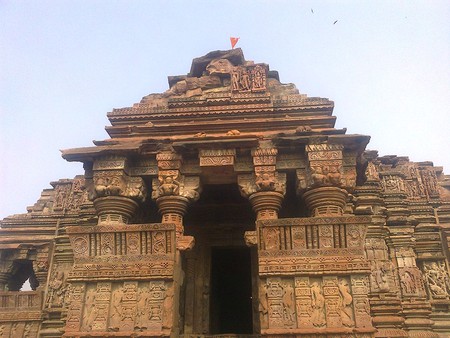 Mandu is also known for its Ganesh Chaturthi festival, a Hindu festival that is held every summer to worship the god Ganesha. The celebrations are atmospheric, with songs sung soulfully by the townsfolk along with traditional art and culture on display.

This hotel is managed by MP Tourism (MPTDC), and has comfortable rooms as well as tents equipped with basic facilities and an in-house restaurant.

Overlooking the ravines, the Rupmati Hotel is the most popular among tourists. It offers well-maintained and furnished rooms—standard, semi-deluxe and deluxe—each equipped with essential facilities. Plus, there is an on-site restaurant, two gardens and AC conference hall. It exudes old-world charm.

By far this is the most premium and luxe stay, around 22 miles away from Mandu. It’s a 19th century heritage hotel with 15 rooms and suites, each with a unique theme and period décor. There’s a swimming pool, dining hall, a library and a children’s play area.

In addition, there are a few small guest houses and hotels, too.

The best time to visit Mandu is October to April, when the weather is pleasant and perfect to capture the architectural and natural beauty of this ancient town through the lens. 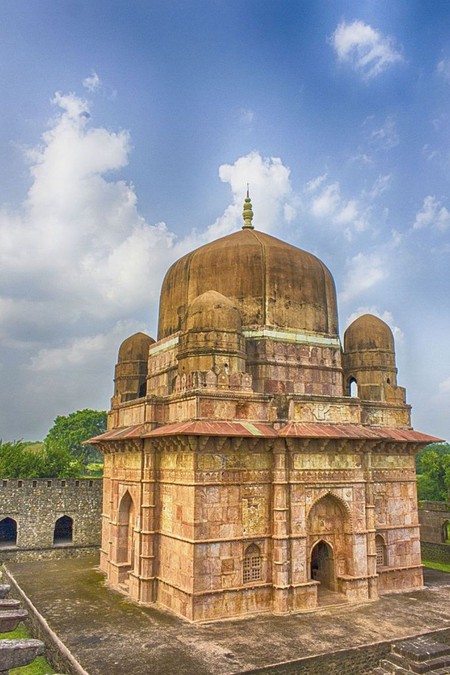 Tucked away in the Malwa plateau in the western part of Madhya Pradesh, Mandu can be reached by train or by air. The nearest airport is Devi Ahilya Bai Holkar Airport 52 miles away, and the nearest railway station is Indore Junction 60 miles away—it’s easy enough to take a cab the rest of the way.