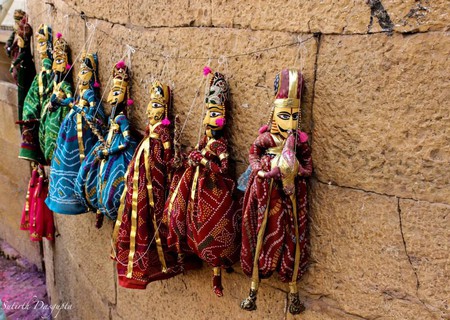 Seated on the western brink of royal Rajasthan in the laps of the Thar desert is the incredible city of Jaisalmer. The pastoral calmness of the desert, coupled with the vibrant princely heritage, makes the Golden City of India a traveler’s paradise. So tag along on a photographic exploration of the grandeur of Jaisalmer.

Jaisalmer is a living relic of the bygone era. On one hand, the shimmering sandcastle, colorful turbans and street shops swaddled in artistic goods instantly transport you to the royal era, and on the other, the sculpted sand dunes of the Thar, the caparisoned camels, and the whisper of desert winds bring the pages of fables to life. As the sun ascends, the city is transformed into a shimmer of golden color play, as most buildings in the city are made of yellow sandstone, thus giving the city its nickname: ‘The Golden City’. 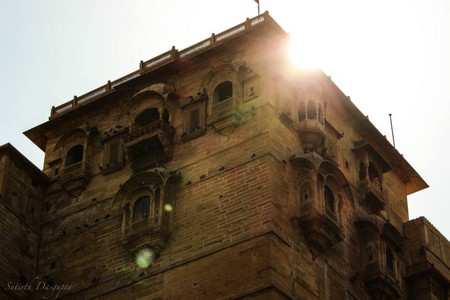 The epicenter of the city is the massive sandstone fortress known as the Sonar Quila (The Golden Fort). Built in 1156 AD, the fort is an UNESCO World Heritage Site. This fortress still houses a third of Jaisalmer’s urban population. 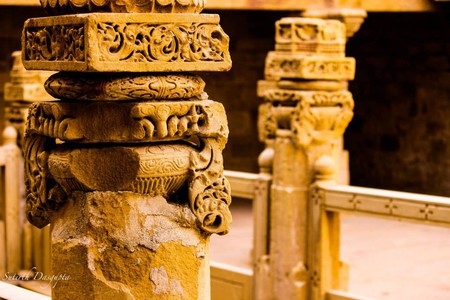 The fortress and the adjoining city is made of yellow sandstone. The shimmer of the yellow sandstone fort wall changes its color from tawny lion during the afternoon to a hue of honey-colored gold as the dusk approaches. 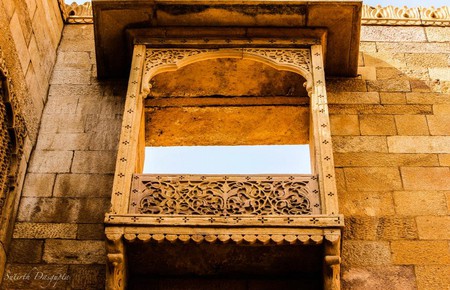 This marvelous monument is decorated with detailed balconies and windows built in the Rajputana style of architecture. These architectural wonders have literally witnessed the sands of time and are an exhibition of the finesse of Rajput craftsmanship. 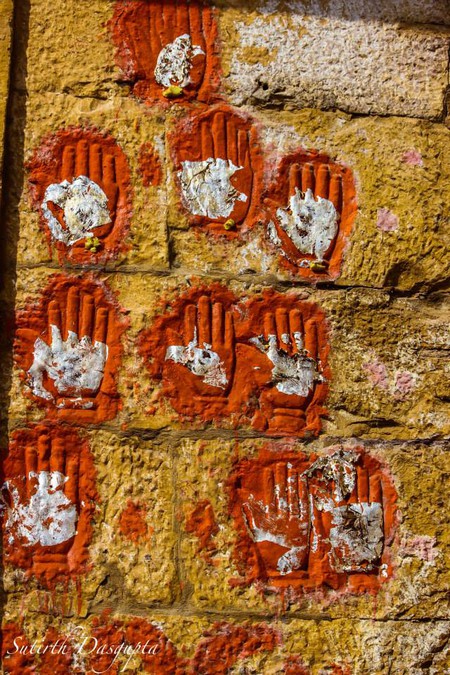 The entrance to the royal palace is ornately decorated by hand prints smeared in vermillion and silver foil. The local guide will mention that these are Sati handprints, and Sati refers to the practice self-immolation, in which the widow ends her life by jumping into the burning pyre of her dead husband — an accepted social practice in ancient times. As royal women proceeded out of the palace one last time, they would leave behind a vermilion stained hand imprint on the palace wall as a sign of prosperity. 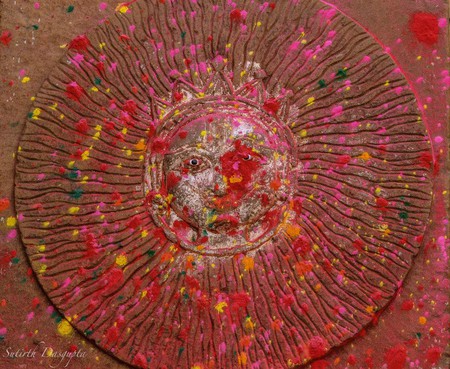 Cobbled lanes run inside the fortress, which houses a number of Jain and Hindu temples. The Sun God, Surya is highly revered among the desert locals, and the idol of this Sun deity, smeared in auspicious colors from the Hindu festival of Holi, can be spotted near the main entrance to the fortress. 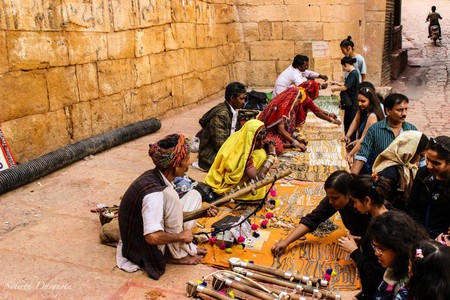 The economy of the city is primarily dependent on tourism, and the various lanes inside the fortress come alive with local artisans selling handicrafts and other souvenirs. Thus, on the city streets, you can witness crammed lines of vendors selling handmade crafts, souvenirs, and semi-precious stones.

Kathputli, or wooden dolls, form a signature segment of Rajasthan’s cultural heritage — it is a thousand-year-old form of string-puppet theatre that is used to enact folk tales. It is the post popular form of Indian puppetry and is mentioned in all tourist guides. 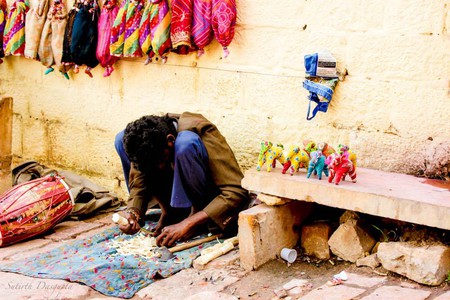 Craftsmen and artists constitute a major proportion of the city’s population. The toy maker in the picture is seen making Katputlis (wooden dolls) at his make shift shop, which are popular souvenirs from Rajasthan. 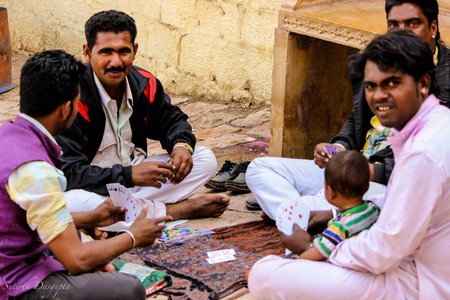 Life inside the ramparts is a living relic of the past. Men assemble at the cross roads to play a game of cards discuss issues of every day life. Even in the age of iPads and Playstations, the desolate desert-land card games and town-square gossips continue to serve as entertainment for the locals. 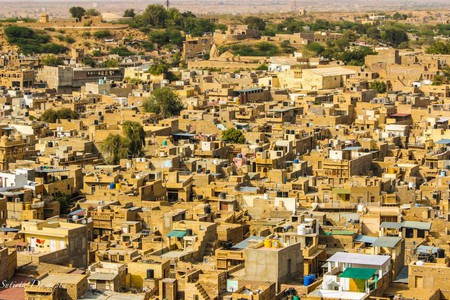 This is an aerial view of the Golden City from the palace balcony. The Jaisalmer fort complex is not just a heritage site, but a living urban settlement. The golden shade of the sandstone houses seems to be in unison with the Thar desert. 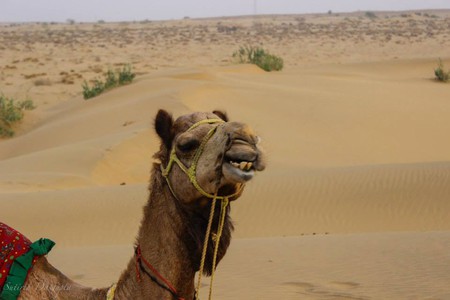 A drive from the fortress towards the Sam sand dunes takes you closer to the desert. The melancholic echo of winds, the scarce vegetation, and the sculpted sand dunes paint a picture of incredible serenity. Caparisoned camels add animation to the otherwise still desert. 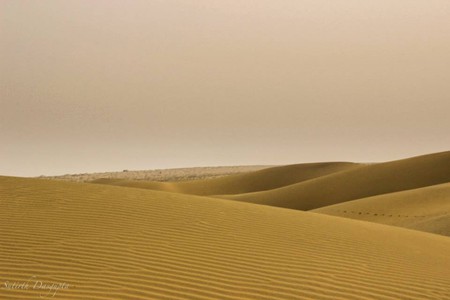 The words ‘vastness’ and ‘serenity’ get redefined in this ethereal world. The sand changes colors with the setting sun, and cool breezes comfort the travelers. 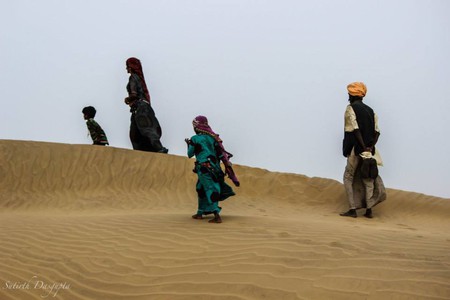 Though the city continues to attract tourists from across the globe, the acute lack of education, agriculture and industrialization has left its citizens impoverished. The locals continue to lead a nomadic lifestyle and supplement their income through folk music performance or work in the tourism industry as camel shepherds and tour guides. 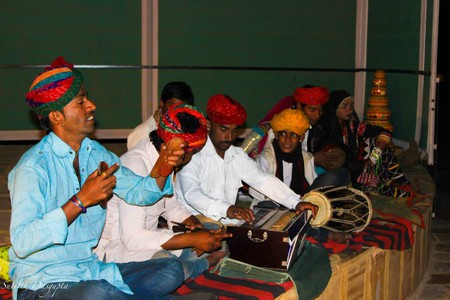 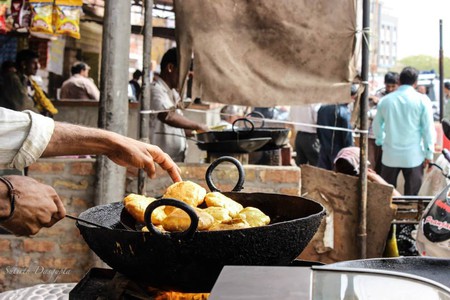 Rajasthan is known for its royal gastronomic platters, and tourists can choose from a huge number of delicacies. To get a taste for the authentic flavor of Rajasthani cuisine, you should stop by the road-side restaurants. 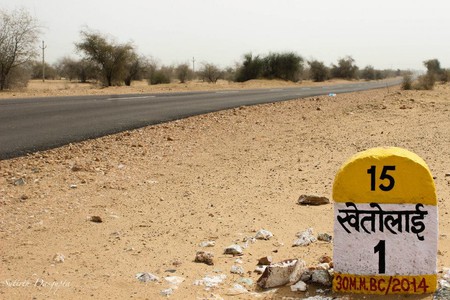 Jaisalmer continues to intrigue till the very end, and the drive from Jaisalmer to Jodhpur takes you through a kaleidoscope where every frame seems to be straight out of a colorful incredible India tourism advertisement.