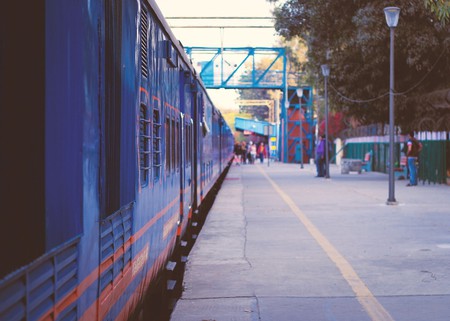 India’s beautiful landscapes are some of the most recognisable in the world. While picture-perfect frames of the Taj Mahal or Holi celebrations are ubiquitous, they often overshadow images of everyday life in the country. A number of Indian photographers on Instagram are now looking to the struggles and mundanity of daily life for inspiration and are showing a side of India that is seldom seen.

Documentary photographer Asif Khan paints a picture of India that is at once genuine and surreal. Through his Instagram account @as1fk, Asif captures the lives of everyday Indians in rural and remote regions. His subjects often include distinct cultural and social themes such as the life of local fishermen plying the river Ganges or the jam-packed classrooms of public schools in Uttar Pradesh.

This professional photographer’s unique appeal lies in his ability to combine pressing large-scale issues with the very real impacts they have at the ground level. His work often revolves around themes surrounding environment, culture and social issues. Prashanth’s work paints a diverse picture ranging from the celebration of Holi in rural Rajasthan to capturing the moment an Olive Ridley sea turtle hatched on the coast of Sindhudurg (a post that earned him a retweet from Hollywood superstar Leonardo DiCaprio).

#Repost @undp_india ・・・ That the river is everywhere at the same time, at the source and at the mouth, at the waterfall, at the ferry, at the current, in the ocean and in the mountains, everywhere and that the present only exists for it, not the shadow of the past nor the shadow of the future.” ― Hermann Hesse, Siddhartha As fifty plus locals offload their cattle, vegetables, fish, children, and produce after a long tiring day, the river which is in the present and everywhere also takes on the role of sustenance, livelihood, culture and the future of their children. While covering this multilayered issue of Ganges cleanliness, #Namamigange project aims to reduce the impact of humans living in villages adjacent to the river. @prashanthvishwanathan © UNDP India

A post shared by Prashanth Vishwanathan (@prashanthvishwanathan) on Feb 21, 2017 at 9:06pm PST

Siddhartha Joshi’s work mostly revolves around the hustle and bustle of Mumbai life, capturing subtle moments in the lives of its citizens. This professional photographer has a unique penchant for separating the surreal from the mundane. His subjects come from wide sections of society – ranging from a friendly Uber driver stuck in Mumbai traffic to a hawker setting up shop in the early hours of the morning.

Soofi is a columnist, writer and photojournalist based out of Delhi and he is best-known for capturing the quirks of city life. His posts are known for their detail and ability to narrate and weave intricate stories through imagery. While Soofi’s work routinely finds space in some of the country’s top newspapers and magazines, it is on Instagram that he truly thrives. This self-proclaimed ‘Hyperlocal Homer’ is at his best when portraying scenes of everyday life that others often overlook, like in this post featuring a cycle-rickshaw-wallah taking a break after a hard day’s work.

PARI, or the People’s Archive of Rural India, is one of the leading social work organisations in India started by award-winning development journalist P. Sainath. Complementing its work at the grassroots level is its Instagram handle, @pari.network, which does a great job of capturing the inspiring stories and travails of people in rural India. Apart from its uplifting portraits of rural life, PARI’s account also casts a window into some of the most pressing social issues. Its Instagram shorts deal with problems such as natural disasters, farmer suicides and government measures such as Demonetisation – capturing their impact on rural India in vivid detail.

PHOTO OF THE WEEK Story by @psainath_pari If #drought is making many in #Osmanabad struggle for survival, it is also boosting a 24-hour trade that thrives on scarcity. . . . Link in bio #parinetwork #instagram #ruralindia #PARI #agrariancrisis

The quirky and interesting Instagram profile founded by filmmaker Shanu Babar weaves an intricate portrait of India by capturing life on its trains that ferry millions across the country every day. Trains are an incredible repository of inspiring stories and experiences and The Window Seat Project presents a direct portal to experience it first-hand. The project not only captures India’s vivid landscapes one train journey at a time, but also sheds light on the amalgamation of cultures aboard India’s trains and the millions of people who depend on them for their livelihoods.

One of India's last remaining narrow gauge trains trundles past a pond full of relaxing buffaloes. The line once belonged to the Maharaja of Dhoulpur, who laid out to transport stone from their quarries. Today, it's one of chief modes of transport for people living in this impoverished part of India. _ Picture by @sidelower _ #windowseatproject #Indianrailways #instagram #india #trains #narrowgaugerailway #narrowgauge #railways #toytrain #rajasthan #dhoulpur #dholpur #buffalo #pond #ruralscenes #rural #ruralindia #incredibleindia #cntraveller #natgeotravel #reuters #gettyimages #photographers_of_india #mypixeldiary #traintravel #photojournalism

This Mumbai-based photographer chronicles life on the fast lane in the famous local trains of Mumbai. Anushree’s work delves into various sections of society that depend on the train for their livelihood – ranging from transgenders and hawkers to everyday office goers. Her work thrives on the fact that her subjects are so relatable to everyday Mumbaikars.

Madhuri, a Transgender ,poses for picture in the ladies compartment of the Mumbai local train. I have photographed Madhuri before also . You all might recognise her from my pictures from before. I have taken this picture (which I posting today) long time back. Madhuri recognised me and told me she saw her pictures online . She also asked me to take her picture again saying that she is wearing a short dress and how she loves wearing short dress. #traindiaries # everydaymumbai #everydayindia

Unlike other accounts featured above, the India Photo Project account publishes a collection of noteworthy works depicting India from across Instagram. The account @indiaphotoproject, founded and run by accomplished photographer Sumit Dayal, is a one-stop-shop for anyone looking for a window into the real India on Instagram. Routinely featuring the works of award-winning photographers, the India Photo Project is the next best thing to a real-life art gallery on Instagram.

This famous documentary photographer has a penchant for portraiture and for capturing intricate stories through his work. Koruth’s primary focus is on the unique and interesting rituals, practices and festivals that stem from different cultures throughout the country. Going by the name Fotobaba, he also focusses on tribal communities that inhabit India’s farthest reaches, shedding light on parts of the country that are seldom in the spotlight.

Murgapan runs a small tea shop. I better give him a print next time, if not no coffee for me. #ooty #Tamilnadu #travel #portrait #people #streetphotography

This Delhi-based photojournalist revels in the human side of news, often pulling out stunning portraits from the sidelines of politics and big events in the capital and beyond. Ravi’s projects often focus on struggles of the poorest sections of society and shed light on several pressing issues including pollution, child labour and human rights.