The Most Common and Flavourful Indian Spices 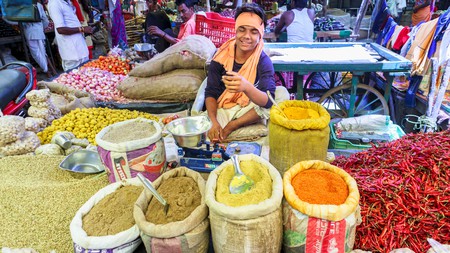 Indian cuisine is known for its bold spices, and this market in Madhya Pradesh is a colourful sight | © Graham Prentice / Alamy Stock Photo

Indian cuisine is characterised by its various spices, heavily used in multiple ways in its traditional recipes. A subtle shift in cooking technique can make the same flavouring taste entirely different, as can the order in which they are used. Curious? We’ve profiled some of the most commonly used spices in India.

A little cayenne pepper certainly goes a long way – just a pinch can add heat to an entire pot of curry. This super-spicy ingredient, which originated in the Cayenne region of French Guiana, is made by grinding up the skins of hot chilli peppers into a powder. Cayenne pepper is often used as a substitute for Indian red chilli and provides heat rather than flavour. It also has medicinal benefits, including aiding digestion and stimulating the circulatory system. 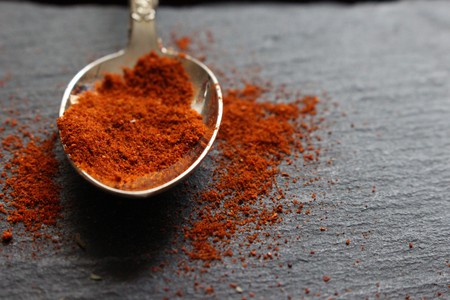 These fragrant flower buds, native to the Maluku Islands in Indonesia, are harvested from clove trees and particularly important in Indian biryani recipes. Cloves have an intense flavour and aroma that features sweet and bitter tones and are often sprinkled into garam masala mixes or paired with other spices such as nutmeg and cinnamon. Use this powerful spice sparingly to add warmth to Indian curries or meat rubs. 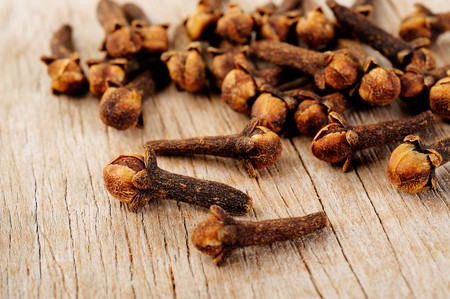 Garam masala, which translates as hot spice, is an Indian cupboard staple integral to many traditional recipes. The fragrant powder boasts a mix of common spices such as pepper, cinnamon, cumin, nutmeg and coriander, which lend depth and flavour to dishes. Although the northern version is most commonly used, garam masala recipes vary by region, and many Indian families have their own unique blend. Add a couple of teaspoons to a simmering Indian sauce for a warming spice infusion. 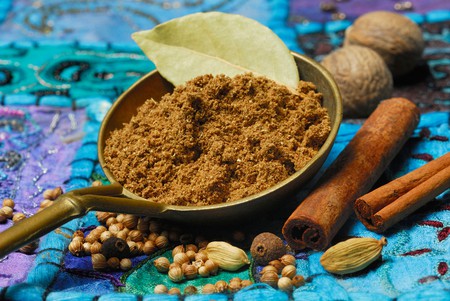 Garlic is used extensively in Indian cuisine, even if it isn’t technically classed as a spice. You’ll find it crushed up in chewy naan bread, diced and added into dips or infused with sauces and meat to add a strong and punchy flavour. If you’re looking for a milder dose, garlic should be added at the start of a dish when you’re frying your onions, as it tends to mellow and sweeten the longer you cook it. 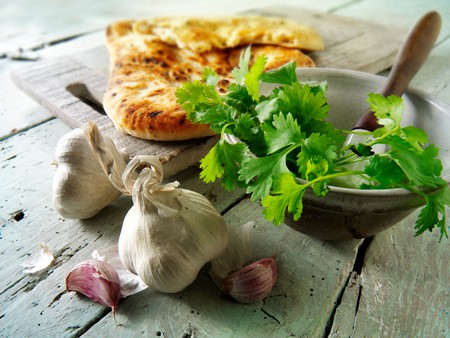 While not a spice, garlic can add a bold flavour to Indian dishes | © funkyfood London - Paul Williams / Alamy Stock Photo

Most commonly used in madras powder, fenugreek brings that signature curry smell and taste to Indian dishes. The tiny seeds can be bittersweet and have a bizarre maple-syrup undertone, which reduces when fried. It’s potent, so it should be used sparingly. However, it does offer health benefits, such as reducing inflammation and blood sugar levels. You’ve most likely tasted this powerful Indian spice in a butter chicken dish. 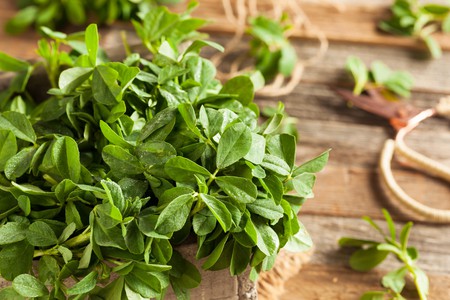 With its sweet, anise flavour, fennel is often served as an after-dinner palate cleanser. The spice is known to aid digestion and reduce bloating, which explains why it’s commonly brewed as tea or offered candied as an after-dinner mint in many Indian restaurants. Fennel is a vital ingredient in many traditional curries, particularly of the madras variety, and is also used to season seafood and meat dishes. 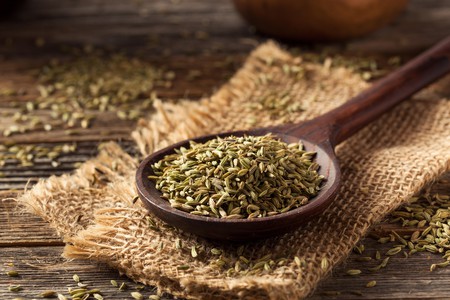 In the Indian culinary world, fennel is often used in curries and as an after-dinner palate cleanser | © Brent Hofacker / Alamy Stock Photo

Cardamom is indigenous to the Malabar coast of India and belongs to the ginger family of spices. It’s the third most expensive spice in the world, mainly because it’s hand-harvested and requires a lot of manual work. While the green cardamom has a mild and light eucalyptus tone, the black cardamom is spicy, smoky and generally used only for its seeds. Cardamom is most commonly used to enhance the flavour of tea and puddings. 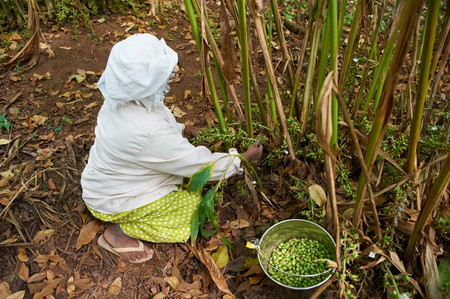 Another spice belonging to the ginger family is turmeric, and it’s among the most commonly used spices in India. It’s derived from the roots of the curcuma longa, a leafy plant native to India, and was predominantly used as a dye and in Siddha medicine for thousands of years. It has an earthy consistency and a warm aroma and taste, and today, it’s mainly used for its flavour and colour and in health tonics for its anti-inflammatory benefits. 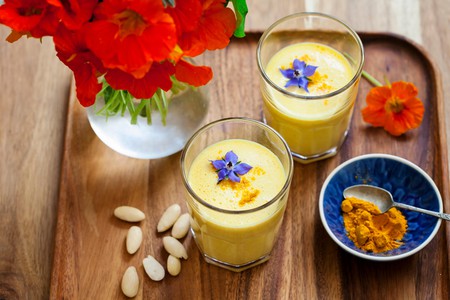 Turmeric is not only used in food and drinks, but it’s also used as a dye | © Magdalena Bujak / Alamy Stock Photo

Saffron, originating in Kashmir and derived from the stigma of crocus flowers, is the most expensive spice in the world – believed to be more valuable than gold. This spice’s most striking feature is its pungent, honey-like aroma, which often softens after being soaked in water or milk. 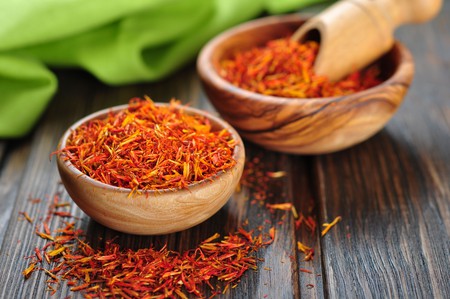 Cumin derives from the parsley family and adds a smoky note and a robust aroma to most Indian curries and vegetables. Fried in its dry form and roasted before use, cumin seed is usually the first spice added while cooking Indian dishes. It’s also dry roasted and converted to powder before being added to recipes such as pudding and buttermilk. Since it burns easily and can become overpowering, use it sparingly. 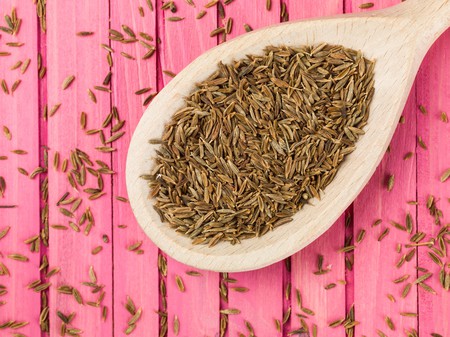 Asafoetida, derived from the resin taken from plants within the parsley family, is usually added to hot oil before all other ingredients. It’s valued for its truffle-like flavour and roasted garlic aroma and used as a condiment and flavouring agent in Indian food. It’s famously used as the main ingredient in the Indian snack, chewer. 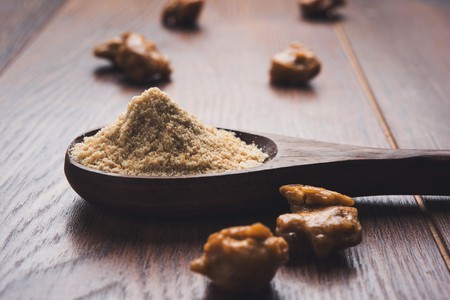 Cinnamon, predominantly grown along the Western Ghats of Kerala and Tamil Nadu and widely used in hyderabadi biryani (basmati rice and lamb), is a sweet-tasting spice with a warm and woody aroma. These properties also make it a great ingredient for cakes and desserts. Along with adding flavour to food, cinnamon also has various health benefits; it’s thought to lower blood pressure. 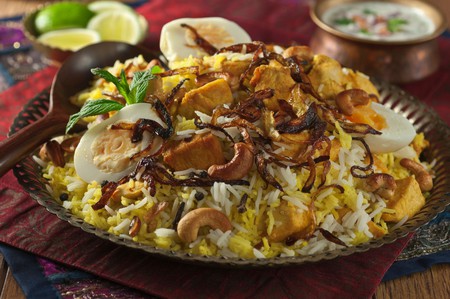 Coriander is a member of the parsley family, and its seeds, often used as an alternative to salt, are oval, ridged and turn from bright green to beige when ripe. This spice tastes sweet and tangy, with a slightly citrusy flavour, and is among the oldest in the world. It’s widely grown in the states of Rajasthan and Madhya Pradesh. 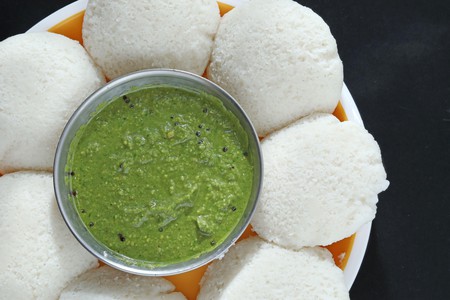 In Indian cooking, brown mustard seeds are more commonly used than the black variety. These seeds can be fried whole to flavour oil, which can then be used to cook raw food or as a garnish. While these seeds are native to Rome, the earliest reference to their use are in stories of Buddha, where he uses these seeds to save a boy’s life. 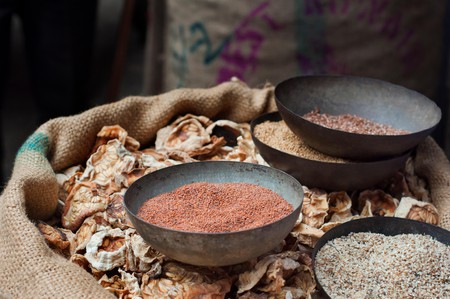 Red chilli powder is made from the seeds of red chillies, which is the hottest part. So the powder is exceptionally strong and used in small quantities. While it originated in the Americas, the Portuguese introduced it to India, and it has since become an integral part of Indian cooking. Various South Indian curries often call for the whole chilli. 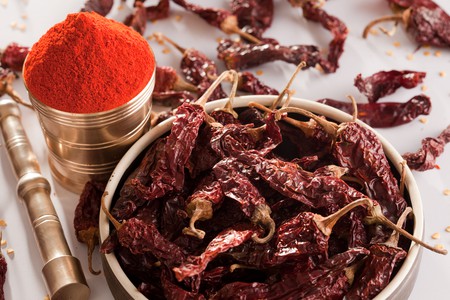