India has long attracted travelers seeking a sense of the surreal, and it rarely disappoints. A mountain road punctuated with hilarious signposts is just a reminder that this country will never become predictable. 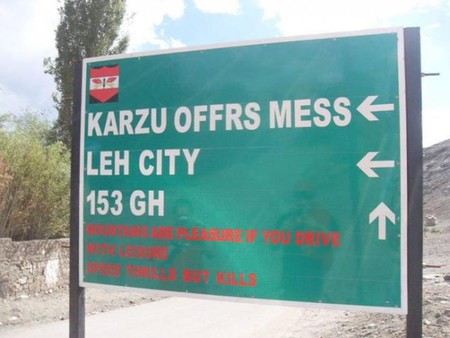 Each person comes back from India with a string of strange stories; some describe the “ear-cleaners” who line city streets armed with rods and prongs offering a 30p service of ear wax removal. Others tell tales of surreal conversations and haggling attempts, and nearly everyone mentions long train or bus journeys shared with chickens, jugglers and noisy chai sellers.

As the Hindi phrase ‘sab kuch milega’ goes, anything in India is possible so perhaps it’s no surprise that on a mountain road some 4,000 meters above sea level a sign reads, “Peep peep don’t sleep”. Twenty kilometres on is another one announcing, “Life is short, don’t make it shorter”.

The 478km long Manali – Leh highway is peppered with these quirky signs, directed at dangerous drivers with a healthy sense of humor. The sober truth that bad driving can kill is disguised in a series of puns and rhymes whose cryptic messages are not always easy to decode.

The signs were put up by the Border Roads Organization which started ‘Project Himank’ in 1985 aspiring to repair and sustain some of the highest roads in India in the northern Himalayas. Despite tough terrain and extreme climatic conditions those in charge clearly maintained their sense of fun. Here is a collection of some of India’s most memorable and outrageous road signs. 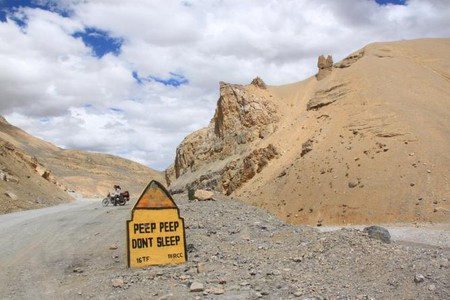 This rhyming phrase of monosyllables is one of the more straightforward signs, all the while accomplishing its goal. 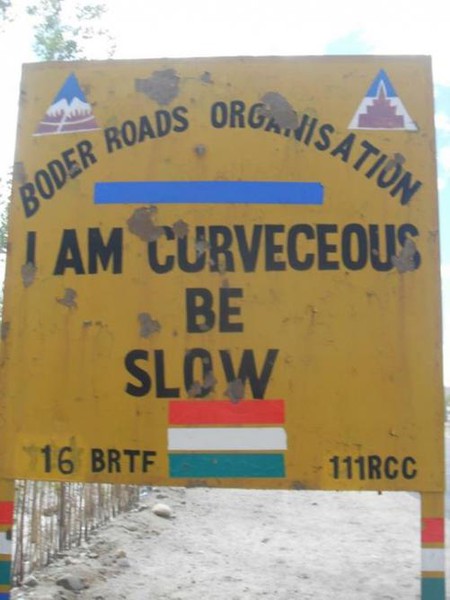 I Am ‘Curveceous’ Be Slow

Positioned on a sharp corner, this motif employs a level of personification in its message as it seemingly compares the road bends to the body of a woman. Adding to the humor is the interesting spelling of ‘curvaceous.’ 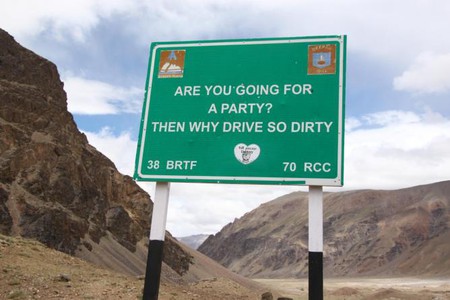 Are You Going to a Party, Then Why Drive So Dirty?

The white letters stamped onto a green background give this sign an air of professionalism. The colors and style resemble the kind of signpost you might see in Britain directing you to the motorway. Yet the riddle it presents is totally bizarre. Does this mean that if you were going to a party then dirty driving would be acceptable? And what is dirty driving? Though the message is unclear it certainly gives travelers something to muse over for the next ten kilometers. 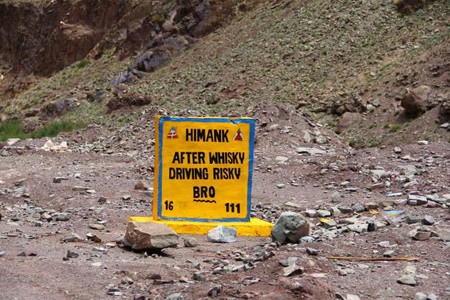 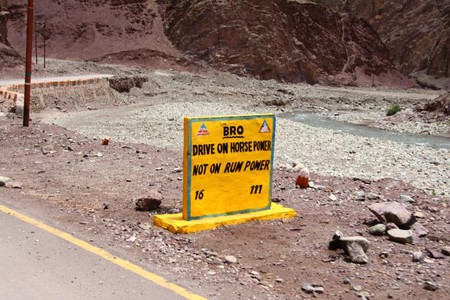 BRO: Drive On Horsepower, Not On Rum Power

In the same vein as the previous sign, this one tries to discourage drivers from fueling their journeys with alcohol. The “BRO” is not just a friendly colloquialism, it stands for the Border Roads Organization; the association responsible for these signs. 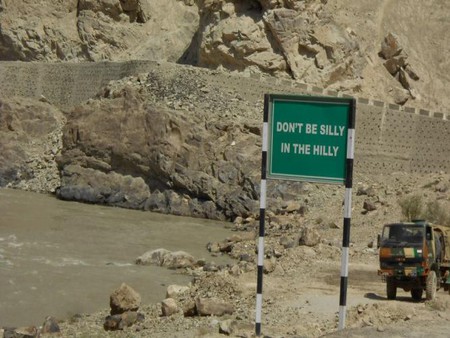 Don’t Be Silly in the Hilly

This rather cheery motif stands on the edge of a particularly windy part of the road. Presumably the “silliness” it refers to is bad driving although this is not specified. 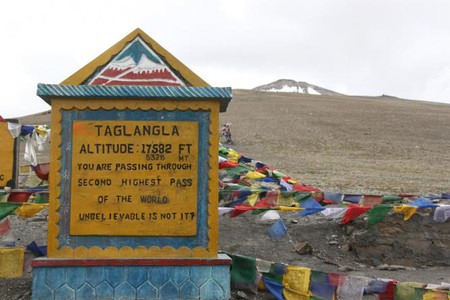 TAGLANGA: You Are Passing Through Second Highest Pass of the World, Unbelievable Is Not It?

At a road pass 5,328 meters high on top of a windy mountain this sign is designed to rally a weary traveller’s appreciation. Whilst inspiring, unfortunately it is factually incorrect; this is not the world’s second highest drivable pass. The road, which goes over the Uturunku volcano in Bolivia, stands at 6,008 meters, and the Chang La pass further north in the Indian Himalayas is 5,425 meters high. The Taglanga falls in at third place, but this fact makes the pass itself no less unbelievable.

Mountains Are A Pleasure If You Drive With Leisure, Speed Thrills But Kills.

This signpost is used in a more traditional way to point out an army camp and the distance to the town of Leh. Yet the author can’t seem to resist slipping in some road relevant poetry. 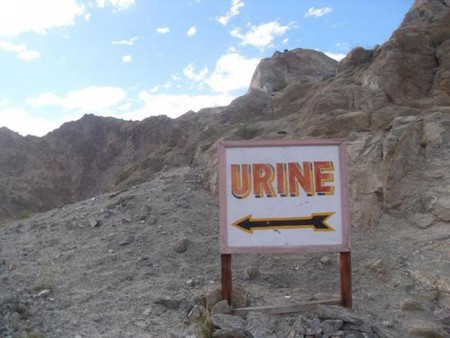 In an empty roadside lay-by, this sign points to behind a mound. It brashly directs those in need of relieving themselves on the long journey to a discreet place. 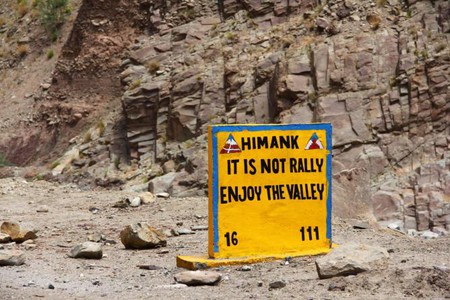 It Is Not Rally, Enjoy The Valley

Urging the driver to enjoy the mountain scenery is one way of asking him/her to slow down. The landscape presents a strange merging of mountain and desert in its vast, brown bareness. At such a height, the sky is deep purple-blue, which meets the orange-brown of the mountain curves and slices the composition in half. Perhaps this signpost offers some of the best advice; take it slow and absorb the setting.