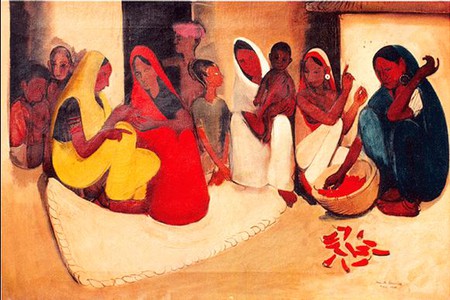 Amrita Sher-Gil (1913-1941), often recognised as India’s ‘Frida Kahlo’, is one of the nation’s most celebrated female modern artists. Heavily influenced by Realism, Sher-Gil strived to portray the lives of people living within her local community. Petra Power looks at one of the most gifted artists of the pre-colonial era. 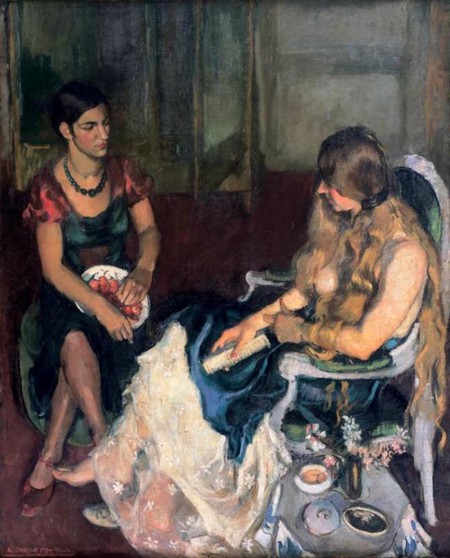 Although her life was short-lived, Sher-Gil has left a compelling body of work behind, and these works have established her as one of the foremost female artists of the century. Extensively trained in painting and exposed to the works of Italian masters, her paintings are representative of this period in the history of Modern Art, drawing inspiration from artists like Paul Gauguin and Paul Cezanne. She became heavily influenced by wall paintings in Western India and the aesthetic of European oil painting techniques. Such a strong affinity for Western modes of painting, as a response to traditional art-historical resources, has made Sher-Gil a captivating artist to study. The confluence of East and West is evident in her vibrant canvases. The evolution of her unique style is mirrored through her paintings, influenced by Impressionist and ‘European’ style, they are characterised by an exceptional colour palette filled with unbridled and bold colour.

Having made such a significant contribution to Asian art and to the works of women artists, her achievements have been internationally recognised and displayed through a number of simultaneous exhibitions such as Tate Modern’s 2007 exhibition curated by Emma Dexter, Ann Coxon and Matthew Gale. The exhibition Amrita Sher-Gil, The Magyar Connection at the Hungarian Information and Cultural Centre, which largely focused on the artist’s biography, also looked more closely and inquisitively at Sher-Gil’s hybrid and diaspora identity. 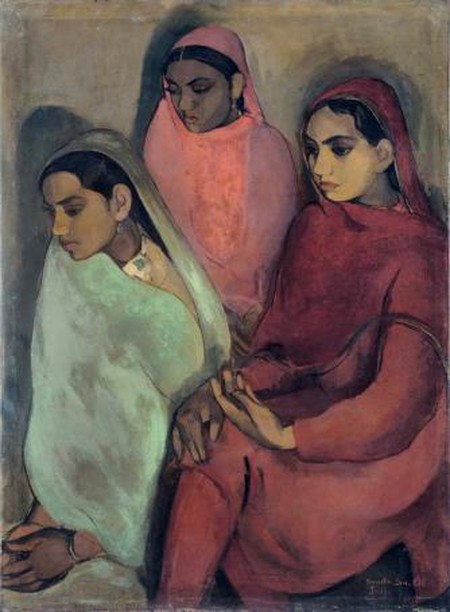 More recently, the three-part show, The Self in Making curated by Roobina Karode at the Kiran Nadar Museum of Art in Saket (KNMA), examined a number of the artist’s self-portraits which positioned the artist as a modern woman. Composed of more than 28 works of art, photographs and sketches, the exhibition displayed some of Sher-Gil’s canonical paintings such as Self Portrait with an Easel (1930), which is now part of the KNMA Collection. In the painting, the artist recasts herself, deliberately moving away from an image of the domestic to one where she is depicted as both muse and maker, artist and object.

Sher-Gil showed a strong empathy and deep engagement for her Indian subjects and depicted the poverty which blighted much of her country. Brides Toilet, Bramhacharis (1937) and South Indian Villagers Going to a Market (1937) are a few of Sher-Gil’s seminal works which convey her compassion for the underprivileged. Influenced by her surroundings and experiences, her paintings are carved out with eloquent symbols of the human condition, and it is clear that her artistic mission was to express the lives of Indian people through her vivid paintings. This marked a significant point in her artistic development where she engaged with the rhythms of rural life in India, appropriating a way of life which was antithetical to her own. 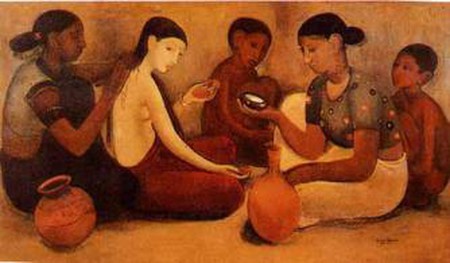 Despite her short career as an artist, Amrita Sher-Gil remains one of the most captivating, curious and alluring artists of her time. With such a precocious talent for painting and a unique post-impressionist style, her development of subjectivity through self-portraits and struggle for artistic identity, will continue to ignite contemporary interest. As an eminent Indian painter, her importance as a pioneer of the modern movement will remain in posterity for years to come. Being a woman who came from an affluent and upper-middle class strata, she encouraged a spirit of defiance against social norms and encouraged women to play a more prominent role within the field of art.

Sher-Gil’s legacy lives on, Difficult Loves, an exhibition curated by Roobina Karode at the Kiran Nadar Museum of Art (KNMA), opened on the 30th of January, 2013, featuring some never before seen works of Amrita Sher-Gil and a retrospective of works by Nasreen Mohamedi. The exhibition brought together works which span over 100 years by nine of the most prominent women artists and revealed Sher Gil’s prominence within that esteemed group.