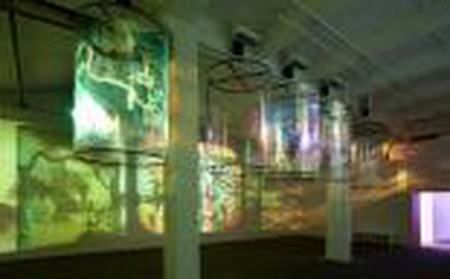 Nalini Malini’s In Search of Vanished Blood is a ground breaking art installation that interrogates feminist issues through an evocation of ancient Hindu and Greek mythology. 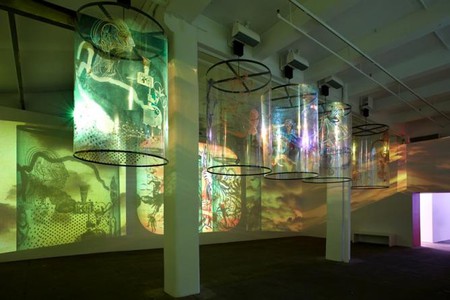 Indian artist Nalini Malani’s seminal piece In Search of Vanished Blood, first shown in 2012 in Kassel, Germany at Documenta 13, has made its debut at Galerie Lelong, New York. What distinguishes this work from previous installations, is its radical submergence of the viewer’s sensibilities in a rotating 360-degree spatial and temporal experience.

In Search of Vanished Blood takes its title from the 1965 Urdu poem ‘Lahu Ka Surag’, and is highly influenced by the 1984 novel Cassandra by Christa Wolf and the 1910 fictional work The Notebooks of Malte Laurids Brigge by Rainer Maria Rilke. Much like Wolf’s protagonist Cassandra, who represents the struggling female artist and the visionary whose visions were disregarded, Malani’s recurring female figures not only address women’s issues but also the artist’s own attempts to be heard. Her personal experience of the traumatic India/Pakistan partition of 1947 commingled with her inspiration from Rilke to explore the idea of existence transforms this historical discourse into a timeless narrative. 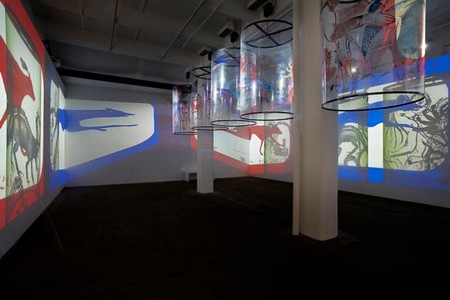 Malani’s work consists of a range of highly codified images that are culled from Hindu mythology, ancient Greek and Indian history, prehistoric imagery, ecological disasters, and women’s issues. Acutely political, but not delivered in a straightforward formal style, her narrative is communicated in a syntax that is both playful and bizarre. Five rotating Mylar cylinders hung from the ceiling bleed with liquid watercolour figures painted on the transparent surface. Appearing vulnerable and enigmatic, each figure is reverse painted in the traditional Indian glass painting technique introduced by the Chinese in the fourteenth century. Accompanied by a six-channel video, Malani converts these figures into a panoply of seamless, magnified shadows that are cast onto the surrounding walls through light projected on to the moving cylinders.

Entering the space is an intensely visceral experience wherein the viewer’s gaze and body are fully engaged with the work. The artist’s endeavour is as much theatre as it is a visual encounter in the way she blends dark moving shadows with pictorial references to contemporary events. Looming forms of dinosaurs, under water sea animals, Kali the Indian goddess of destruction, bloody human figures, urban skylines, gestures from sign language, ecological disasters, women, and a gigantic prostrate female figure are some of the images that swirl around the viewer mingling myth with the everyday world. An eerie sound track and a profusion of reds, oranges, yellows, blues, greys, and blacks submerge the viewer in what is akin to an underwater experience leaving one to contemplate the significance of her alchemical process and its blurring of specific identities. 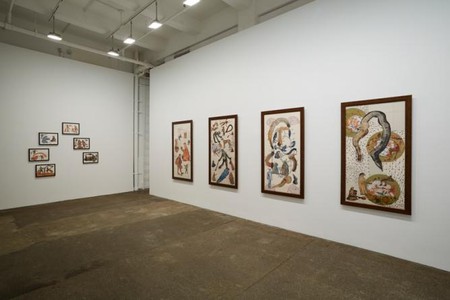 Voiceovers in a range of female intonations express the call of doomsday and female injustices.A series of disjointed utterances such as ‘this is Cassandra speaking’, ‘in the heart of darkness’, ‘I reject all the sperm I have received’, and ‘I take back the world I gave birth to’, bring our attention to the continual struggle for women’s equality, and the difficulties of the world we live in. Its destructive path is offered in fragments, traces, and erasures that point towards a new visual language. Without being offered any synthesis or resolution, one is left to ponder the limits of rationality.

In his catalogue essay that accompanied Malani’s installation at Documenta, socio-cultural anthropologist Arjun Appadurai writes a brief exegesis of the misinterpretation of the Gandhian principle of non-violence, which is based on the need to take action, as a perverse call for violence. It dovetails Malani’s outcry against the aimlessness of war and the need to resort to brutality to sort out human differences. Referencing the traumatic bloodbath of the Partition and other horrific acts against humanity, Malani raises important questions about the meaning of existence and the role one plays in the world.

In Search of Vanished Blood is as much a search for roots, brotherhood, and camaraderie as it is a despairing cry for what is going on around us and what is possibly to come. For Malani her place as an artist is best served in her ability to purge, heal, and metamorphose the viewer’s experience through her enthralling 360-degree installation.